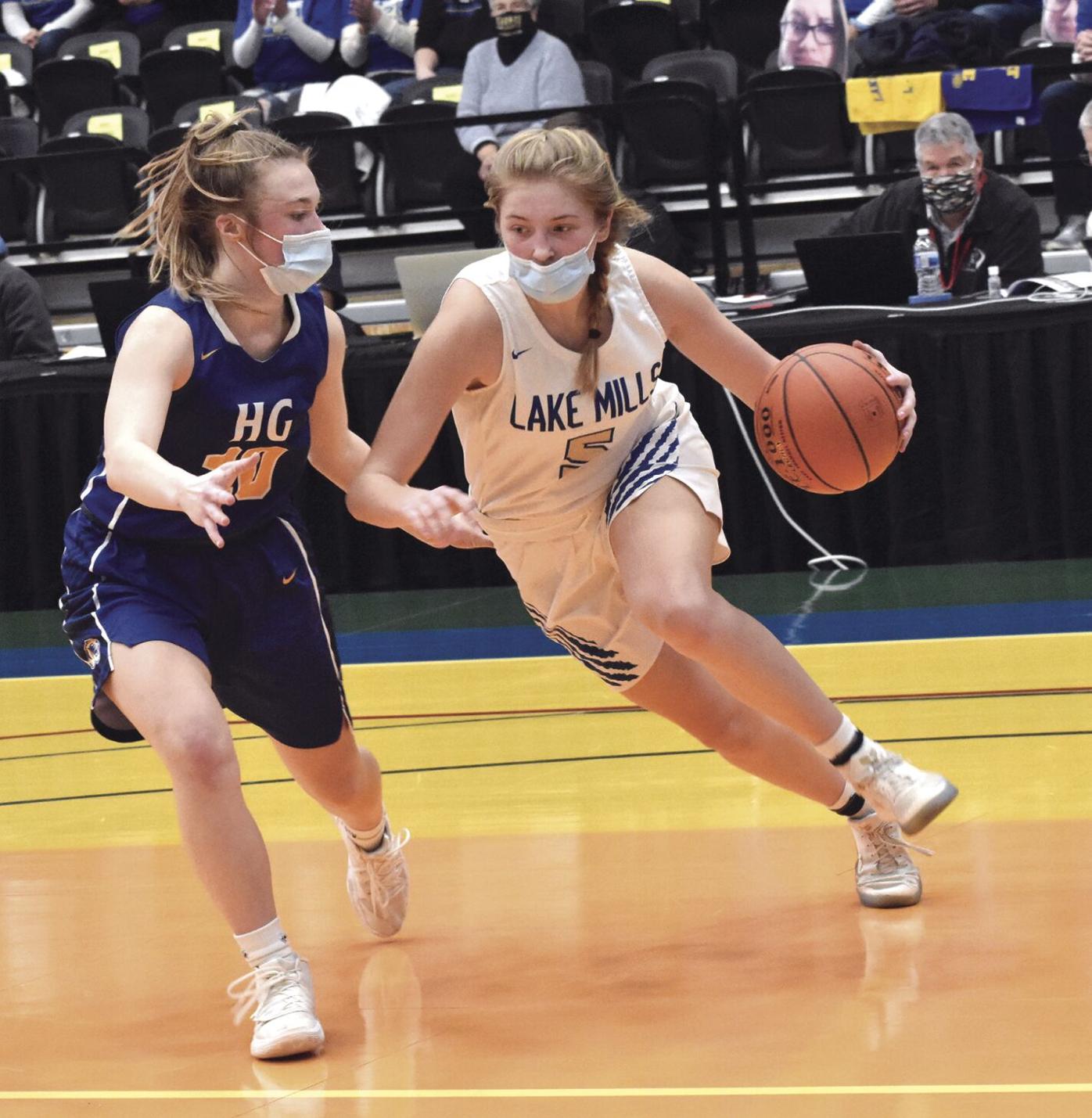 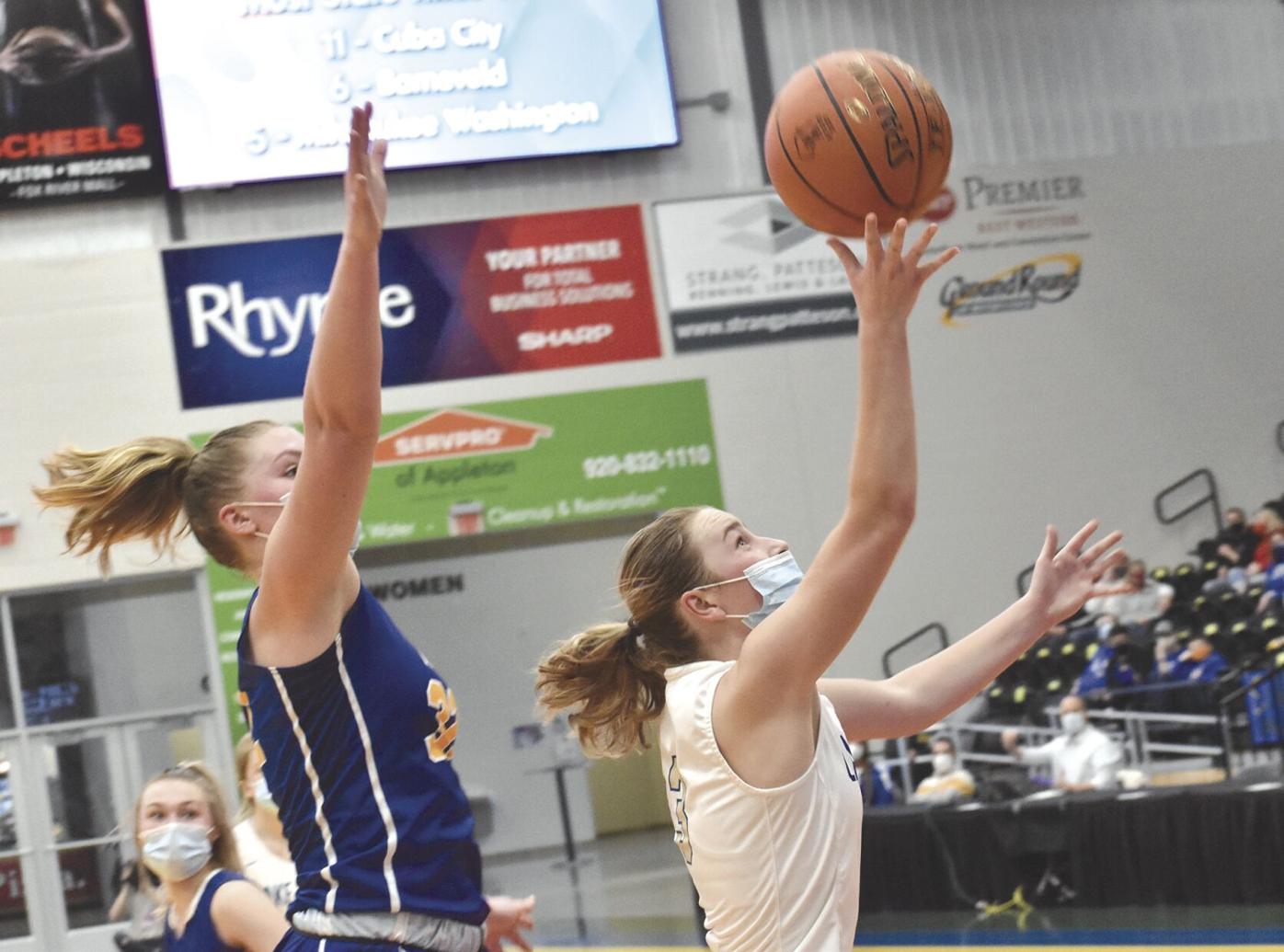 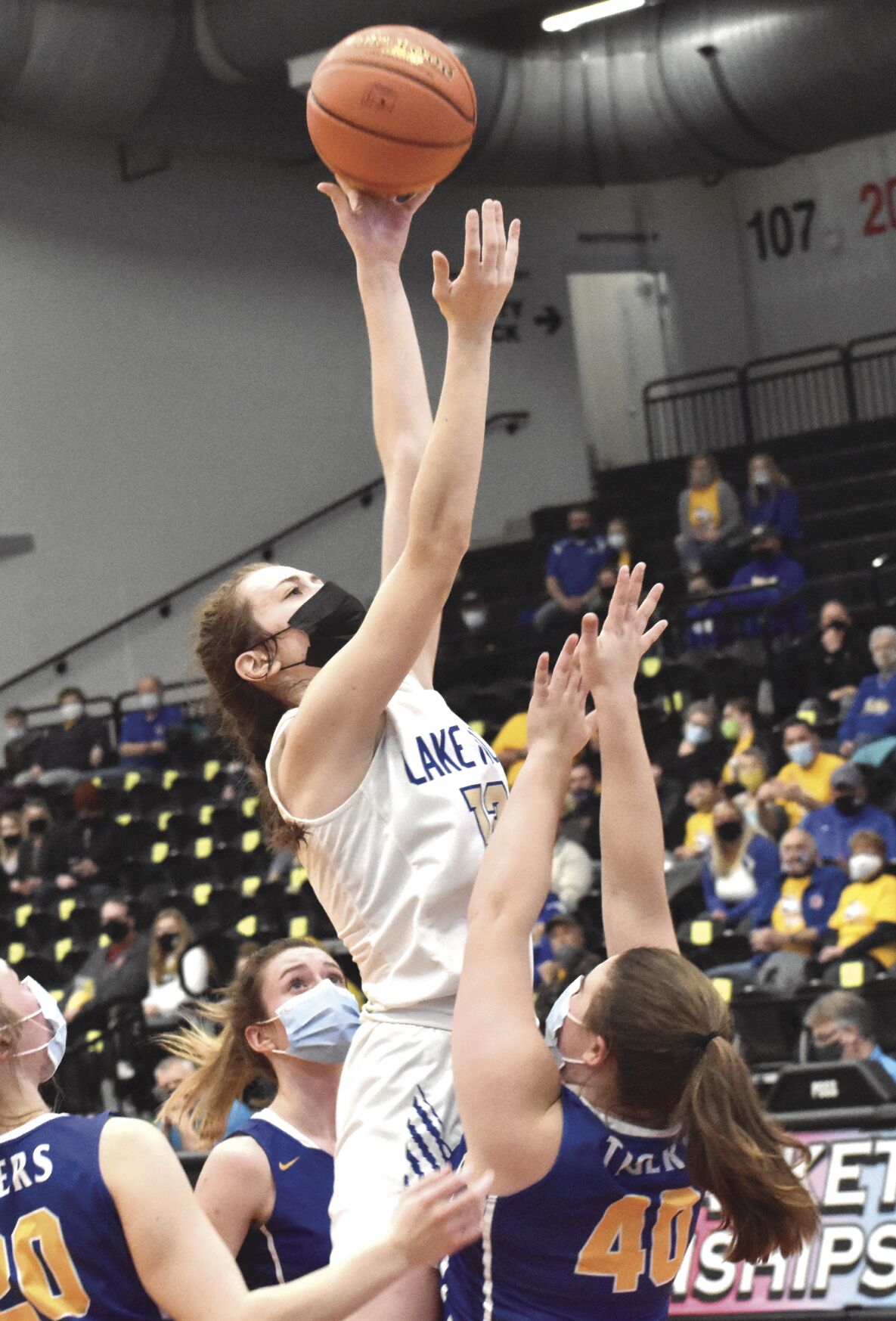 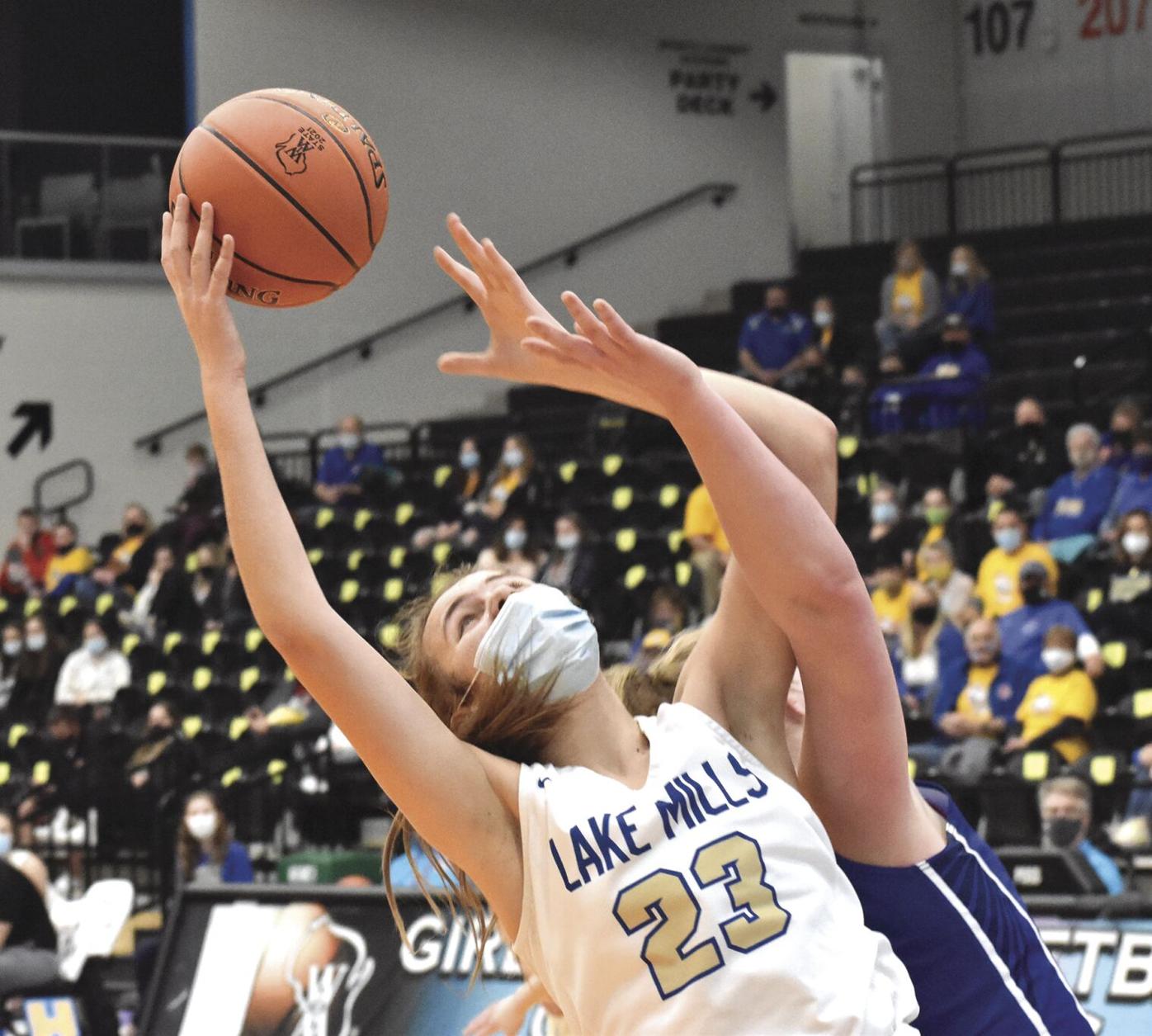 Lake Mills sophomore center Bella Pitta grabs a rebound during the first half of a  WIAA Division 3 state semifinal at Menominee Nation Arena in Oshkosh on Friday. The L-Cats won 70-60. 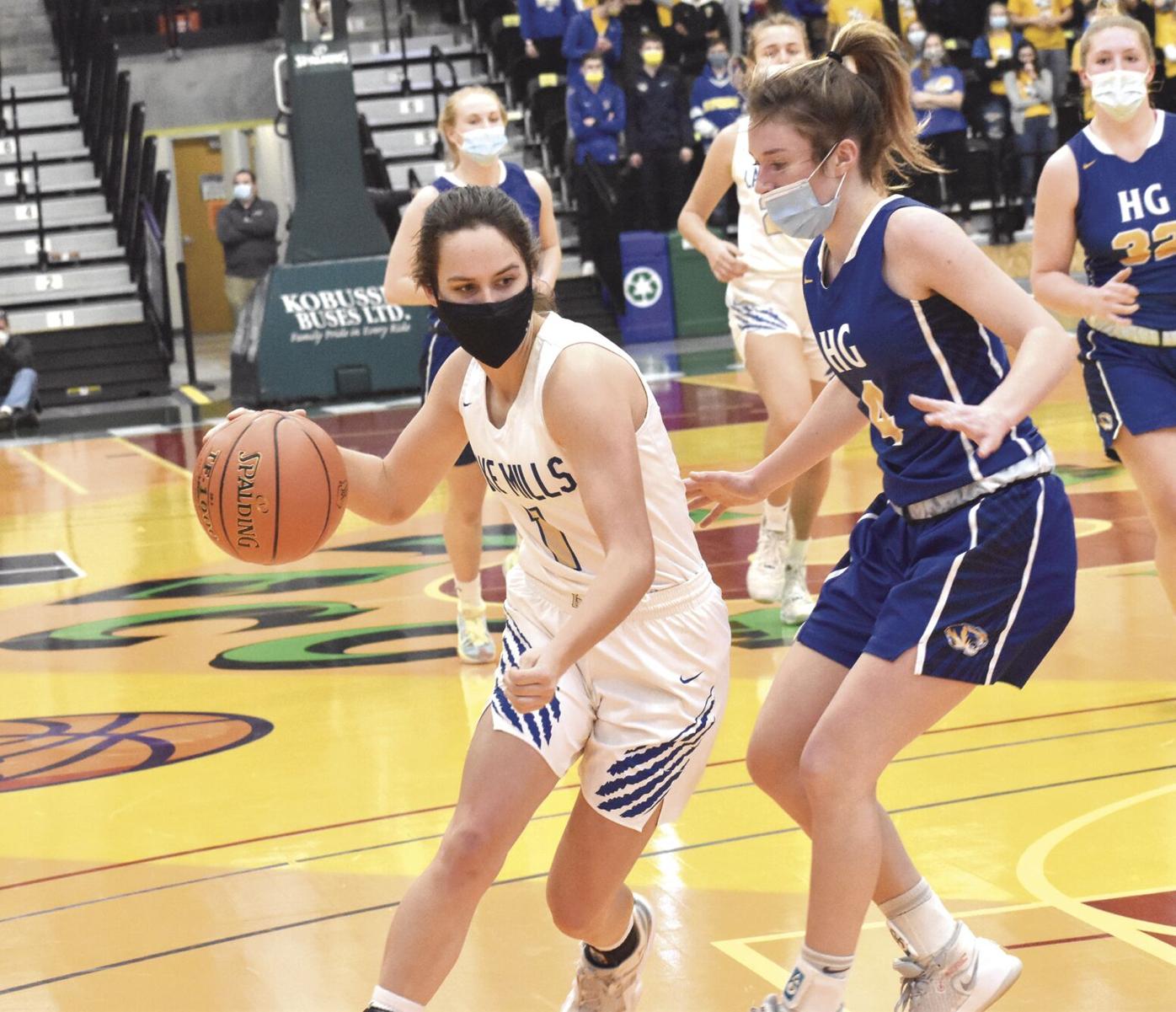 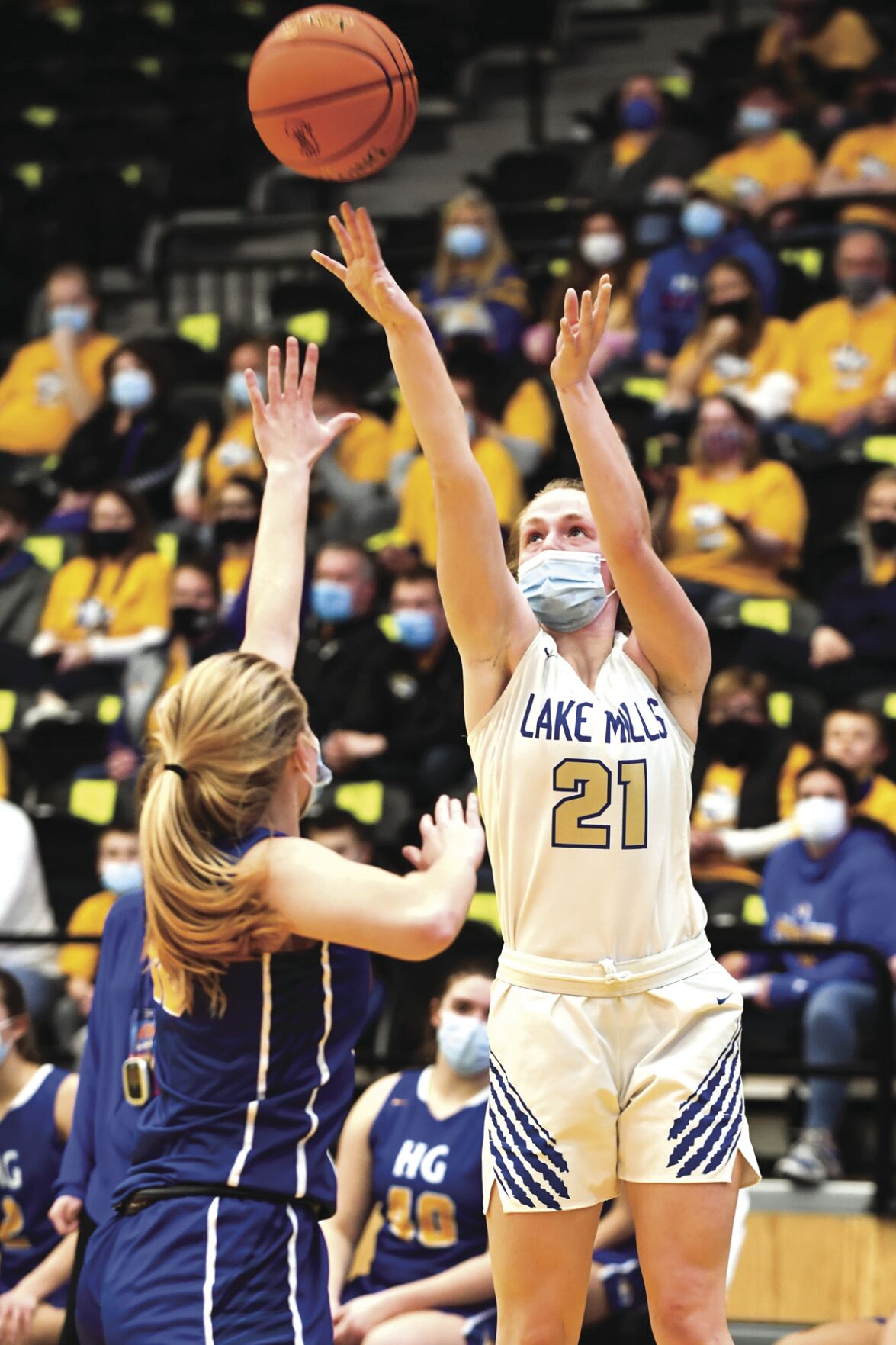 Lake Mills sophomore center Bella Pitta grabs a rebound during the first half of a  WIAA Division 3 state semifinal at Menominee Nation Arena in Oshkosh on Friday. The L-Cats won 70-60.

OSHKOSH — The L-Cats used a perfectly timed 11-0 run to pull ahead, slamming the door shut for good.

The team meanwhile opened the door to a state final.

"It's very exciting. All of us are very excited and ready to get some revenge on Aquinas," said senior point guard Julianna Wagner, who added 18 points. "Right now we have to rest, get ice, eat some food and get some of our energy back."

Howards Grove used an 8-0 run to take its first lead since it was 5-2 with 8 minutes, 12 seconds remaining.

Lake Mills, which won its first game at the state tournament in its second appearance, called an ensuing timeout.

"During the one timeout I said 'we're fine, we just need to get some stops and box out,"' Lake Mills girls basketball coach Brandon Siska said. "Take care of the ball and take it one possession at a time. Let's win the next possession and we did. Got a stop and won the next one. Were able to take the momentum back there. They've been in this situation so much. The girls didn't flinch. Dug heels back in and got back to what we were doing."

The team got back to the staples, free-flowing offense and stingy defense, that helped it build a 40-28 halftime advantage.

"We knew what we had to do. We had to start having more energy on defense," Wagner said. "Together as a team, we had to get stops on defense. On offense, we were patient and found the open person. We were calm. Most of us, the seniors at least, have been playing for four years on varsity. The experience has helped us a lot in these situations. We were able to stay together as a team."

Wagner hit a lefty layup to give the L-Cats the lead for good before a turnover led to an easy transition score for Pitta, pushing the margin to 53-50 with 7:48 left.

The Tigers had the wind taken out of their sails when senior guard Leah Parnitzke went down with an ankle injury before Pitta's basket.

Senior guard Taylor Roughen then hit a corner 3 on a look from senior forward Vivian Guerrero, who chipped in 15 points, that made it a six-point edge.

Pitta then played a big part in capping the 11-point push, dishing to Guerrero for an easy two on a post-to-post look. Pitta followed that with a hard baseline drive, finishing a difficult over-the-shoulder reverse layup with her strong hand that made it 60-50 with 5:32 to play.

"Last year she led us at state with 18 points (against Wrightstown)," Siska said. "She's been about a double-digit scorer the last three years. We're so deep this year and playing with a bigger lineup than we have so her scoring has been down a little bit.

"I'm not surprised, she likes these big moments. She played really well, happy to have her. We had Julianna and Taylor go down in the state game last year. She stepped up and didn't flinch. She was ready to play. She's had probably her best two weeks of practice in the last four years, so I'm not surprised at all."

The closest the Tigers (24-2) would get from there was on a putback by senior guard Mackenzie Holzwart, a Northern Michigan University recruit who scored a game-high 30, that made it an eight-point game.

Pitta provided a late highlight reel play, securing one of her five steals before a one-handed spike on a bounce pass delivery while falling that hit a streaking Guerrero in stride for a walk-in score.

"Exciting game. Thought for the most part we played really well on offense," Siska said. "Defensively, we could have played a little better and rebounded better. Mackenzie is a heck of a ballplayer. There were times we were running two people at her and still wasn't much we could do about it. Thought she played great today.

"When we got up by 14, I thought we had a chance to put it away and they kind of battled back. Hats off to Howards Grove, that's a heck of a team. We're excited to get another shot at Aquinas. Be a great game tonight. These kids have worked really hard for this opportunity, we're looking forward to it."

The L-Cats had roughly four hours to rest up and recoup before facing an unbeaten Aquinas squad, which won the earlier meeting in La Crosse, 70-65, on Dec. 28, 2020.

"We had to go real deep into the bench today," Siska said. "Makenna (Vesperman) came in and played real well there for a few minutes. Some of us should be rested for tonight because we got in foul trouble and got to sit more than they usually do. Fortunately for us, we have a deep bench and a few hours here to rest up. They are in shape and can handle it, especially these seniors. This is it, they have 36 minutes left in their careers."

"First time I saw them in an open gym I knew we had something special there," said Siska, who is in his fourth year. "Five wins that first year, we were really competitive in most ballgames. We just needed to learn how to win at this level. We had a great summer that year and the next year we got a little bit better.

Lake Mills couldn't have scripted a much better opening 18 minutes.

Jade Pitta had the team's next six points (a layup, two free throws and a putback on the break) followed by a left-handed score in the paint by Guerrero. Jade Pitta then knocked down a corner 3, pushing the lead to 22-14 with 7:55 left and forcing a Tiger timeout.

"They have multiple people who can shoot the 3," Howards Grove girls basketball coach Heidi Georgeff said. "They have the big girls on the inside and when one big girl gets in foul trouble, they rotate another one in. They are very deep. You don't notice the substitutions. I knew that about them coming in.

"They are really balanced all-around inside and outside. They are not afraid to pull the trigger on shots. They don't stop shooting if they don't fall. They made a couple of huge ones after missing quite a few in a row. They are a very aggressive offensive team that is good."

Pitta, who scored 13 before the break, had an athletic catch in transition before pivoting and scoring inside to make it a double-digit affair.

Wagner then knocked in her only 3-point shot, hitting from the top after a seal off by Bella Pitta.

The Tigers answered with their only 3 on five attempts hit by Bria Pedrin. Wagner then drove middle, kicking to a spotted up Roughen from the corner for a shot from distance. Jade Pitta grabbed an offensive board, hitting both after being fouled. She then assisted on a shot from beyond the arc by senior forward Hannah Lamke.

Wagner scored the team's final four points of the first half, going coast-to-coast with a step through layin and a midrange floater at the first-half buzzer.

A transition score by Guerrero to open the second stanza gave the L-Cats their biggest lead at 14.

"It was huge to jump out to that 14-point lead," Siska said. "After the loss to Marshall, we have come out ready to play with great first halves. We have jumped on everyone starting with the Luther Prep game, in the regionals and both games in the sectionals. When we have that opportunity, we need to extend the lead and kind of put the game away instead of letting teams fight back in it."

Holzwart, who also had eight rebounds and broke the school all-time scoring record in her final prep game, scored nine of Howards Grove's next 12 points, cutting the lead to 47-42 on a midrange jumper with 12 minutes left.

Guerrero split a double team, finishing with the left before the Tigers reeled off eight straight to take a brief edge.

Howards Grove senior forward Maddy Near scored 11 of her 13 points in the first frame.

Guerrero shot 7-for-9, contributing seven rebounds, and Wagner had four assists. Jade Pitta went 6-of-10 from the field, hitting all six of her free throws.