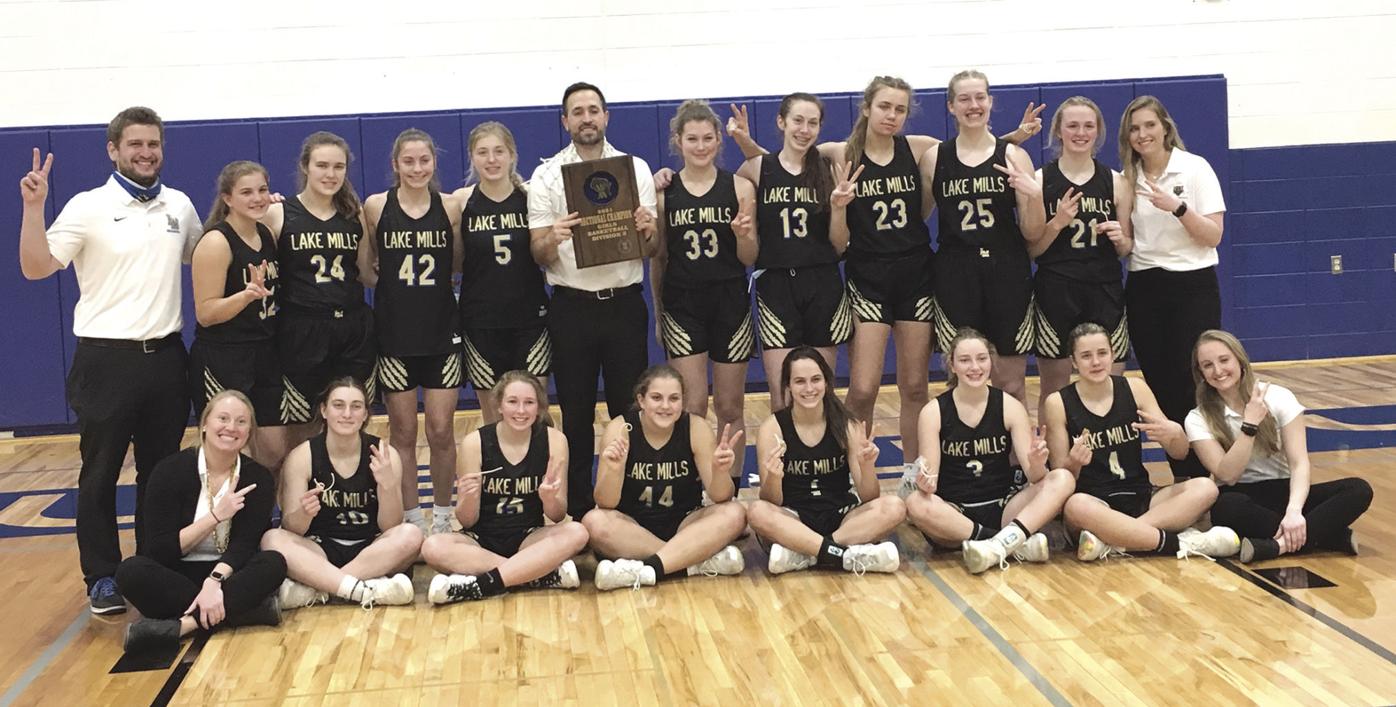 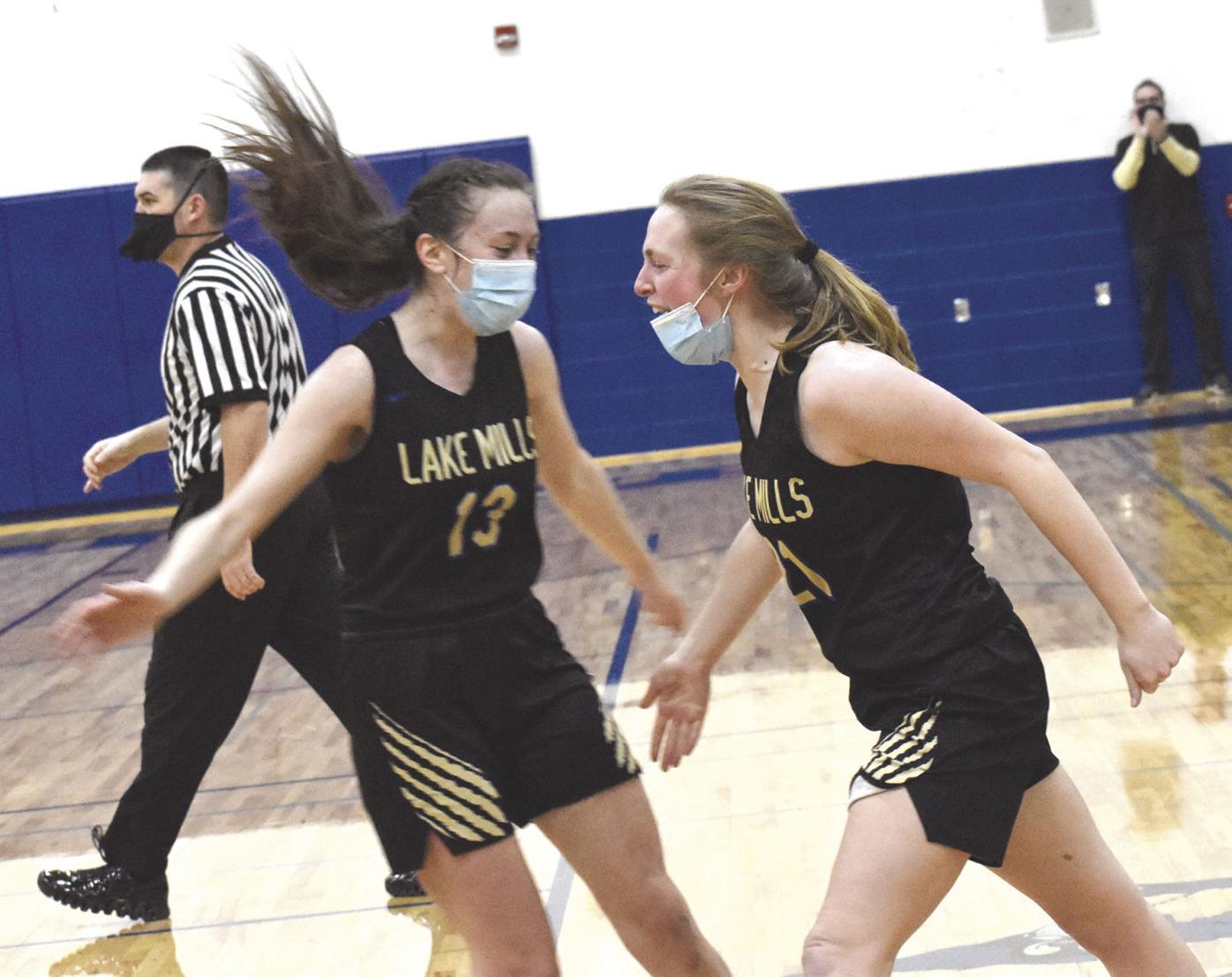 LAKE MILLS — Back with a vengeance.

The Lake Mills girls basketball team will make its return trip to the WIAA Division 3 state tournament at Oshkosh’s Menominee Nation Arena on Friday, facing off with Howards Grove at 2:10 p.m.

“We have unfinished business (at state) and are going to take it hard, give it everything we’ve got,” said senior forward Vivian Guerrero, who is averaging 19.3 points in the playoffs.

The L-Cats lost to Wrightstown, 62-54, in the D3 semifinals at the Resch Center in Green Bay last season.

“Hopefully it’s a situation where we’ve been there, done that,” said Lake Mills girls basketball coach Brandon Siska, who has a 69-28 record of four seasons at the helm. “Had a worst-case scenario happen against an outstanding Wrightstown team last season. Julianna Wagner goes down with the ACL and Taylor Roughen gets hurt.

“Now we’re going deeper into the bench and had foul trouble along with it. There was no plan B at that point. Kids stepped up, played hard and it was a two-point game late. Even with everything that went wrong, we almost pulled it out against a good team. This year will be different in that we’ve done it before.”

The Resch Center wasn’t available this time around due to the pandemic so the WIAA changed things up, utilizing two different sites (La Crosse and Oshkosh) and playing the semifinals and finals on the same day.

Lake Mills, which drew the second seed, plays in the second semifinal Friday against third-seeded Howards Grove. Top-seeded Aquinas faces fourth-seeded Westfield at 10:45 a.m. The winners square off at 8:15 p.m.

D2 games on Saturday will also be in Oshkosh while the other three divisions play at the La Crosse Center.

Last season, each side was limited to roughly 75 spectators as COVID-19 was just emerging worldwide. The WIAA will be permitting approximately 500 fans per side for this season’s games.

“It helped to be (at state) last year and to know what it feels like,” senior center Kayla Will said. “The atmosphere (was unique) even though there weren’t as many people there. Just that atmosphere of being at state that we’ve already had really will help us out. We’ll use that to help us win and I think we could really do well.”

The L-Cats actually have a higher seed at state than they did in their own sectional, where they were No. 3. The team’s path to Oshkosh included traveling 123 miles to beat second-seeded Prairie du Chien on a layup conversion by Guerrero with 3 seconds left Feb. 18. The group then outlasted top-seeded Marshall, the 2018 and 2019 D3 state champs, in double overtime on Saturday.

The group’s next foe in Howards Grove sports a 24-1 record and is led by 5-foot-8 senior guard Mackenzie Holzwart, a Northern Michigan University signee. The team’s only setback came at Mishicot, 57-52, on Feb. 1.

“Have to keep Holzwart in check,” Siska said. “Do whatever we can to contain here. Keep (Maddy) Near off the paint, limit her touches and keep her off the glass. Winning the rebound battle and turnover battle is key. Howards Grove is a good team that’s well-coached and plays hard. We’ll have to play well.”

Holzwart scores 16.3 points per game and Near, a 5-11 junior forward, averages 14.1 points and 7.5 rebounds. Senior guard Leah Parnitzke averages 11 per contest and the team’s next two leading scorers sit at 3.2 points per.

Howards Grove was one of the teams bumped up a division when the WIAA elected to put an equal number of schools in each division this season.

For Lake Mills, a state championship is now within reach.

“We want to get that gold ball; I think we can do it,” Will said. “We want to show people younger than us that anything is possible and you can do it with hard work. Anything you want, you can do. Believe in yourself and believe in your teammates. With that, you can go far.”

The L-Cats possess 10 seniors, a group that’s weathered and seen just about everything. As freshmen, seven of those now four-year players endured a 5-17 campaign, one that included losing nine of 10 to end the season.

There were brighter pastures ahead as those ninth graders became upperclassmen, posting a combined 40-8 record the next two years. That stretch included two Capitol North crowns, a regional title and a sectional title.

“We give 110 percent every play,” Wagner said. “We know it could be over at any minute now, any second really. We are always giving it everything we have and really helping the underclassmen get comfortable. We are really good leaders now and understand what it takes.”

One of the differences between last season’s team, which finished 23-2, and this year’s is the emergence of senior guard Ava Wollin, Will and sophomore center Bella Pitta.

“Ava this whole year has been a huge shot-maker for us,” Siska said. “Multiple times when momentum is going the other way, she hits a big shot or dagger for us. Having a fully healthy Kayla rebounding, blocking shots and being more of an inside presence has been beneficial. Pitta has had big moments too and is our second-leading rebounder. Those three stepping up adds depth for us.”

Lake Mills’ primary eight-player rotation, which swelled to double figures while Wagner was sidelined to open the season or fouls pile up, allows for strength in numbers, limiting the burden from a scoring or minutes perspective on one person. Senior shooting guard Taylor Roughen, the team’s leading scorer at 13.5 points a game, averages 27 minutes. Guerrero (26 minutes) and Wagner (24) see the next most floor time.

“We’re definitely older, more mature and have better chemistry than last year,” Wollin said. “We know what it takes. We want it, so we’re going to go for it.”

The L-Cats have had six players score in double figures in the postseason alone, a stretch that saw the team improve to 3-1 in games decided by eight or less.

“We are playing with a ton of confidence,” Siska said. “The Marshall loss (on Feb. 2) was a reset and refocus we needed at that point in the season. Beating Prairie du Chien and Marshall back-to-back, those are teams good enough to win the state title this year, so to beat them both in one week was huge.”

Lake Mills has three players (Roughen, senior wing Jade Pitta and senior forward Hannah Lamke) who have played at least 95 career games. Roughen has made 89 starts, Wagner 81 (in 88 career outings) and Jade Pitta 80. Wollin has played 81 games, Guerrero 79, including 69 starts, and Will 62.

Statistically, Wagner has led the team in scoring average the past three seasons and is shooting 47 percent (31-for-66) from 3-point range this season. She’s also averaging 3.1 assists.

“Julianna was ahead of the game from the get-go which wasn’t a surprise,” Siska said of Wagner’s rehabilitation from a torn ACL. “Started working her in limited minutes early. To see her back late January was great. Now she’s back to shooting a high percentage from 3, dishing and taking care of the basketball for us.”

“Vivian has come into her own,” Siska said. “She improves each year and has stepped up the last few games.”

The Tigers may have to adjust to L-Cats’ pressure on the fly.

“They are a high-pressure defense that gets in your face,” Howards Grove girls basketball coach Heidi Georgeff said. “We face more of a pack it in style defense in our conference. We’ve had teams in the postseason try some things with pressure.

“We have good ballhandlers and players that can attack with the ball. It’s just a defense we don’t see a lot. We’ll look for good matchups, opportunities to get the ball into our post players and into the lane.”

Roughen, for her part, understands nothing comes easy in big elimination games, something this group has seen its share of.

“We just have to play hard the entire game and play for each other,” she said. “Fight through whatever we have to.

“It’s an amazing feeling to go back to state. We’re so close of a team which is why we do so well. We are always communicating and playing together. That helps us a lot when we play.”