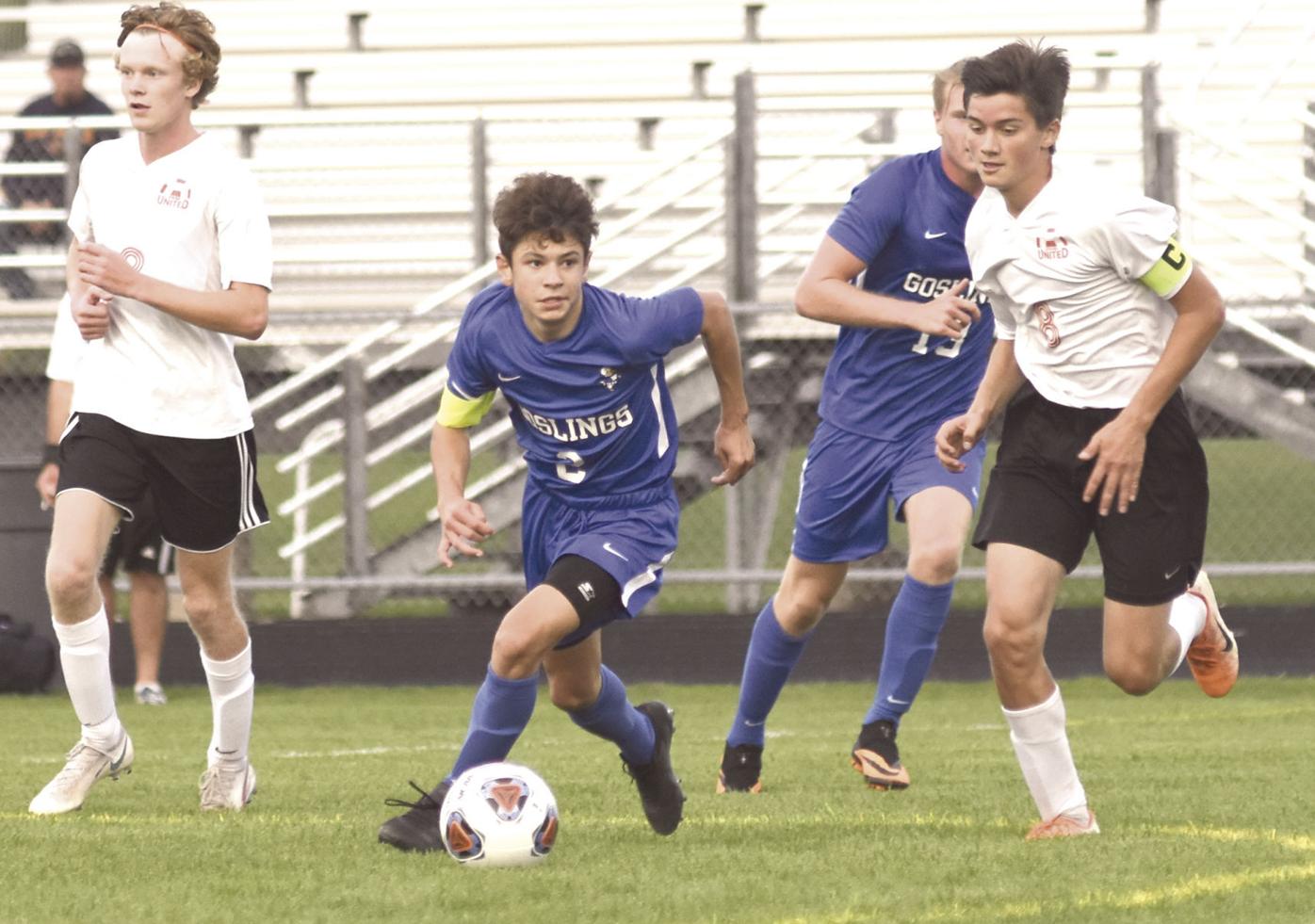 Watertown junior midfielder Connor Lehman pushes the ball up during the season opener against Portage on Tuesday at Landsverk Field. Lehman scored a second half goal as the Goslings played the Warriors to a 1-1 draw. 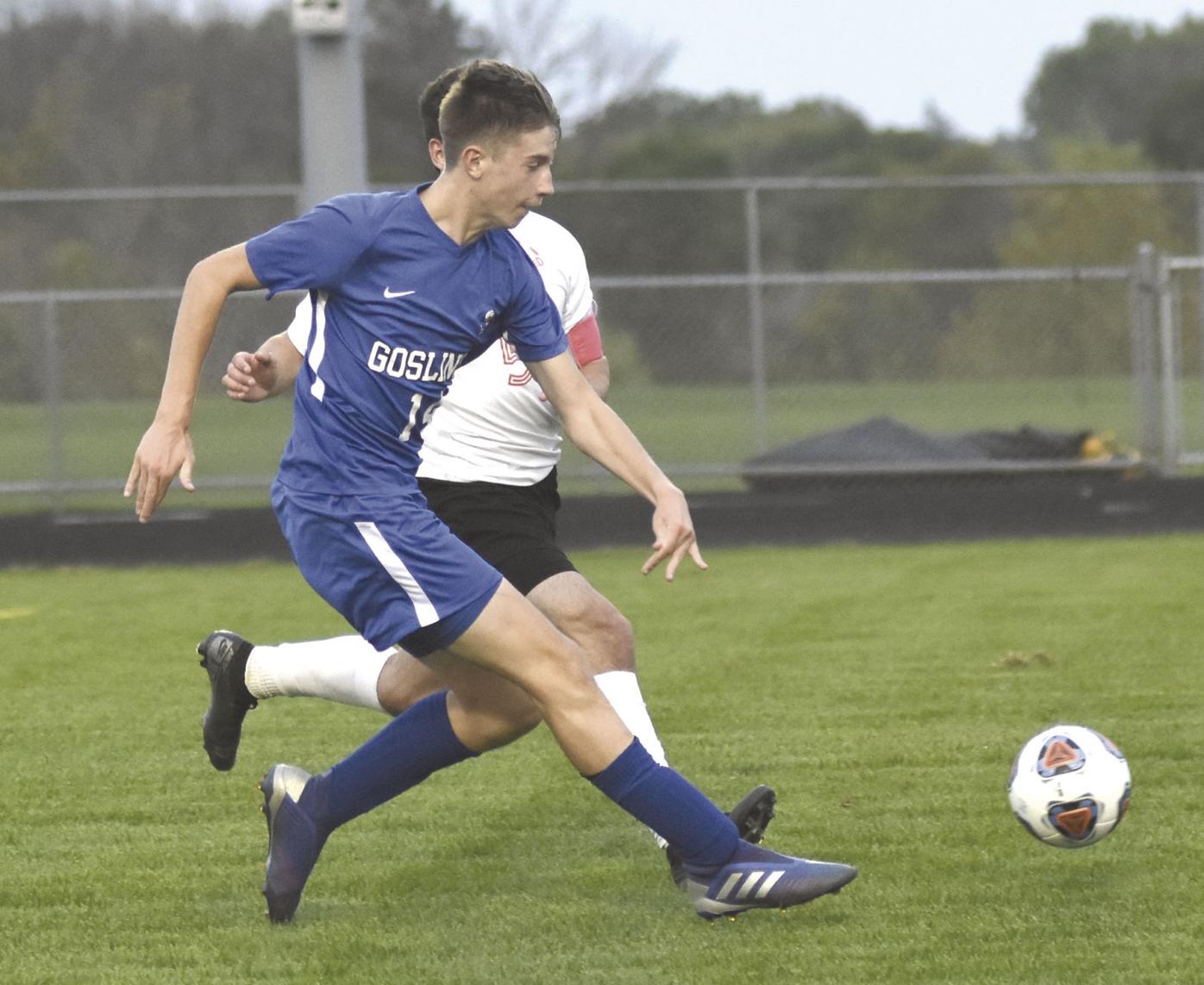 Watertown freshman forward Owen Backus placed this shot on goal off the post during first half action against Portage on Tuesday at Lansdverk Field. Backus had a second half assists as the Goslings played the Warriors to a 1-1 tie.

Watertown junior midfielder Connor Lehman pushes the ball up during the season opener against Portage on Tuesday at Landsverk Field. Lehman scored a second half goal as the Goslings played the Warriors to a 1-1 draw.

Watertown freshman forward Owen Backus placed this shot on goal off the post during first half action against Portage on Tuesday at Lansdverk Field. Backus had a second half assists as the Goslings played the Warriors to a 1-1 tie.

Connor Lehman’s second half goal was the lone score for Watertown’s boys soccer team, which opened the season with a 1-1 draw against Portage on Tuesday at Landsverk Field.

Lehman scored off an assist from Owen Backus at the 47-minute mark to break a scoreless tie. Hunter Collins scored the equalizer for Portage at the 62-minute mark.

“It was a good start to the season,” Watertown boys soccer coach Clayton Kratzer said. “We have some rust on our touches and passing, but we created a ton of scoring opportunities, which is something we often struggled with in 2019. We took 18 shots on goal. Most of those were good saves by the Portage goalkeeper.

“We had shots that hit the posts and missed by inches. We had multiple runs from freshman striker Owen Backus where he split the centerbacks, but just couldn’t slot it past the keeper. If we put some of those opportunities in the back of the net, we could have run away with the game with six or seven goals.”

Eli Piasecki made two saves in the first half for Watertown. Roberto Ortega made one save in the second half.

“The goal we gave up was a long ball from about 25 yards out that went over Ortega’s head,” coach Kratzer said. “I think we just weren’t expecting the shot from distance since they hadn’t attempted any long shots up to that point. We held them to four shots on goal and they were able to convert one. We have some experience with that from last year. We had some games where we really controlled things the whole game, but the opposing team capitalized on one of the few chances we gave them. Unfortunately, it doesn’t matter how lopsided shots on goal are, it’s how many go in the back of the net.

“We can take away a lot of positives from this match and build on it. We’ll work on getting some pass combinations up the touchlines rather than one man trying to dribble 60 yards. We’ll shake the rust off our touches and the weight of our passes. And we’ll make sure those ‘just misses’ become goals. Kratzer had a good game controlling the back line and Jacob Narkis set up a lot of scoring opportunities for Backus as well as taking five shots of his own.

“Liam McCloskey did a great job in his new role as outside back. Lehman is always in the right spot for a cross or an errant touch by the opposing goalkeeper or defender and that’s how he scored again tonight when Backus crossed it in and the ball pinged around on a couple players before getting to his foot right in front of goal. We had him in a central mid position to start the game, but he does all his damage on the wings so that’s where he’ll be from now on. Even coaches need to shake some rust off at the beginning of the season.”

“We have a little familiarity with Baraboo after playing them last year,” coach Kratzer said. “It was our first game of the season and a lot of guys were a little shell-shocked so it didn’t go well. I know we are a much different team now than we were that first game of 2019 and I know we can do better Thursday. We’re going to go out and show them we can put balls in the back of the net.”