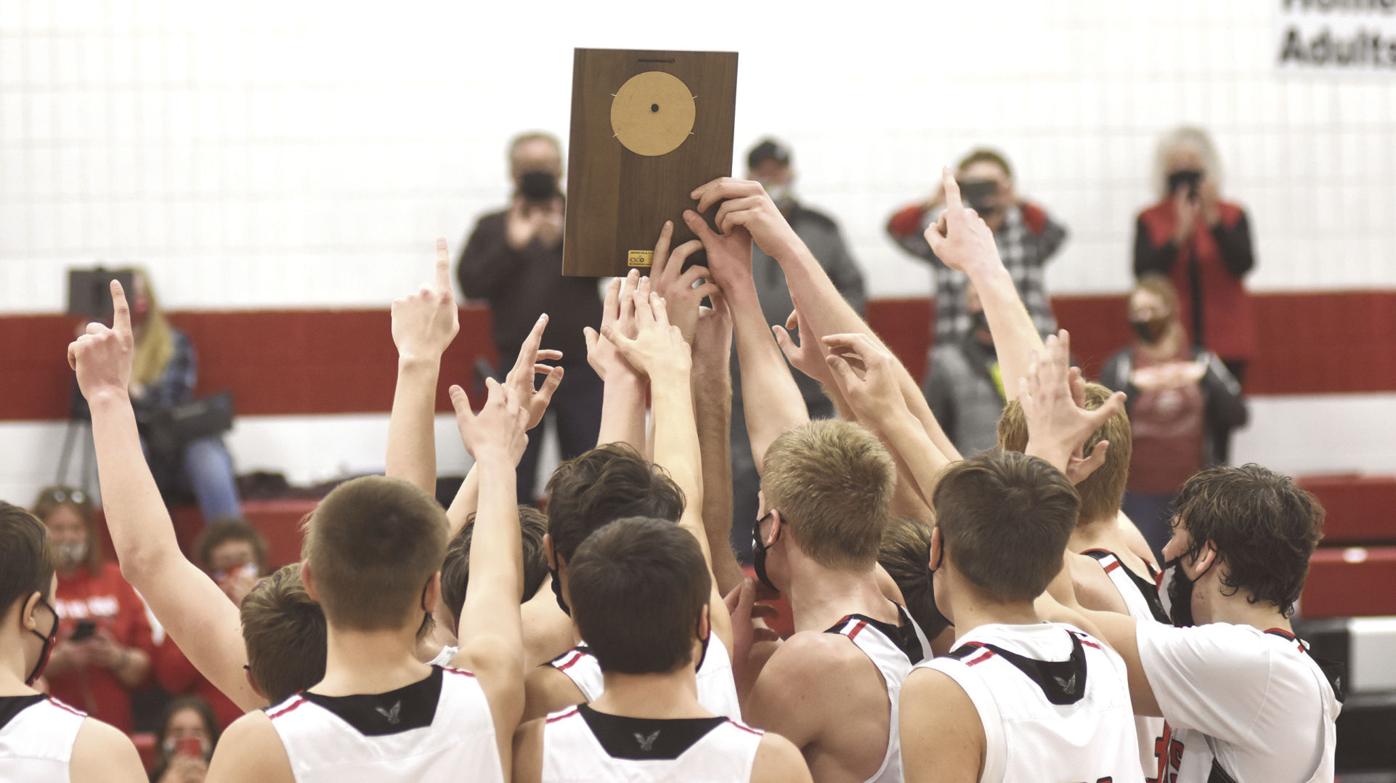 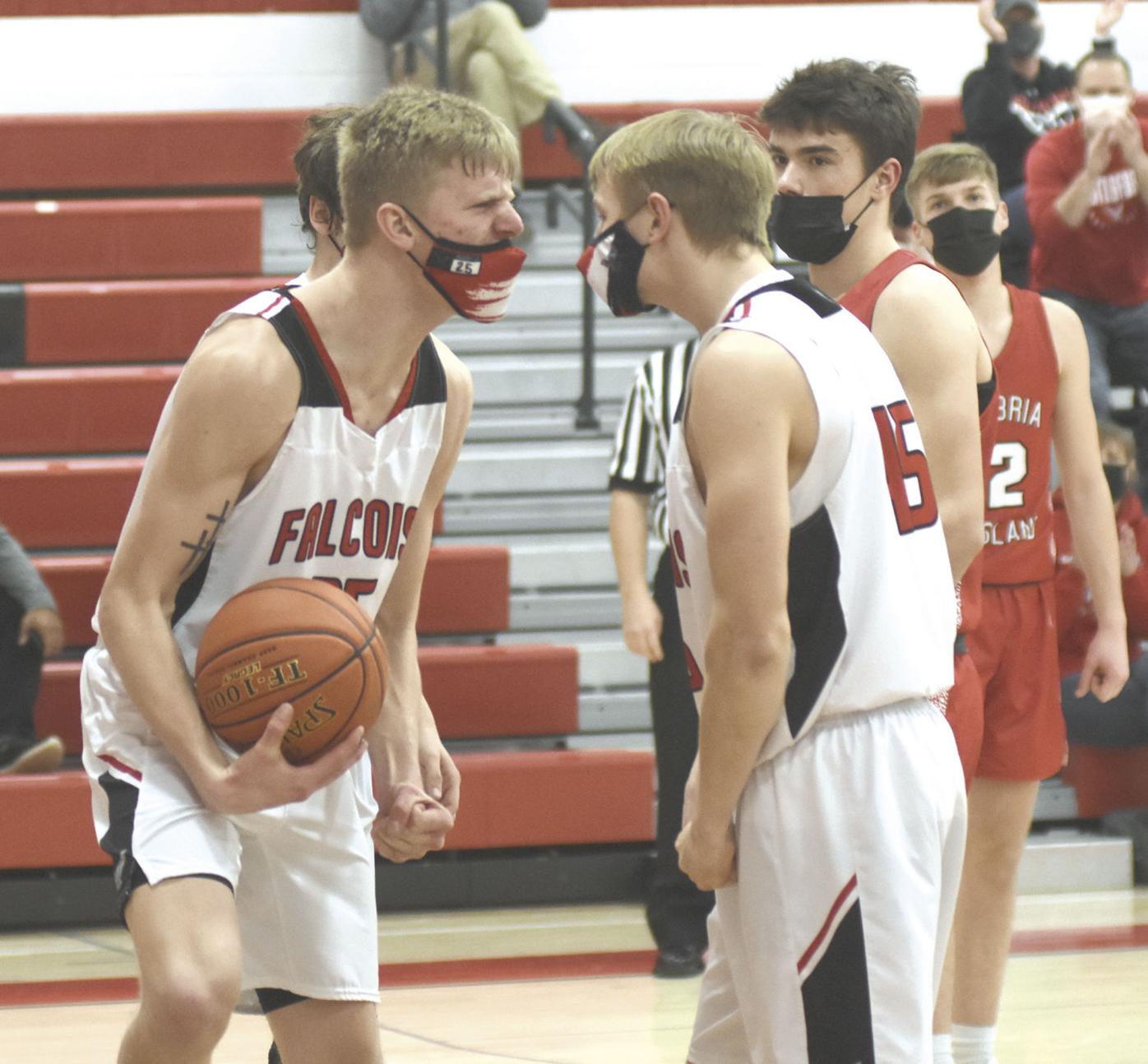 Hustisford senior guard Dylan Kuehl celebrates with junior forward Blake Peplinski after Peplinski scored to set up a three-point play opportunity in the second half of a regional championship game against Cambria-Friesland at the Falcons’ Nest on Saturday. Kuehl scored 16 points and Peplinski added 10 for the Falcons as part of a 59-53 victory. 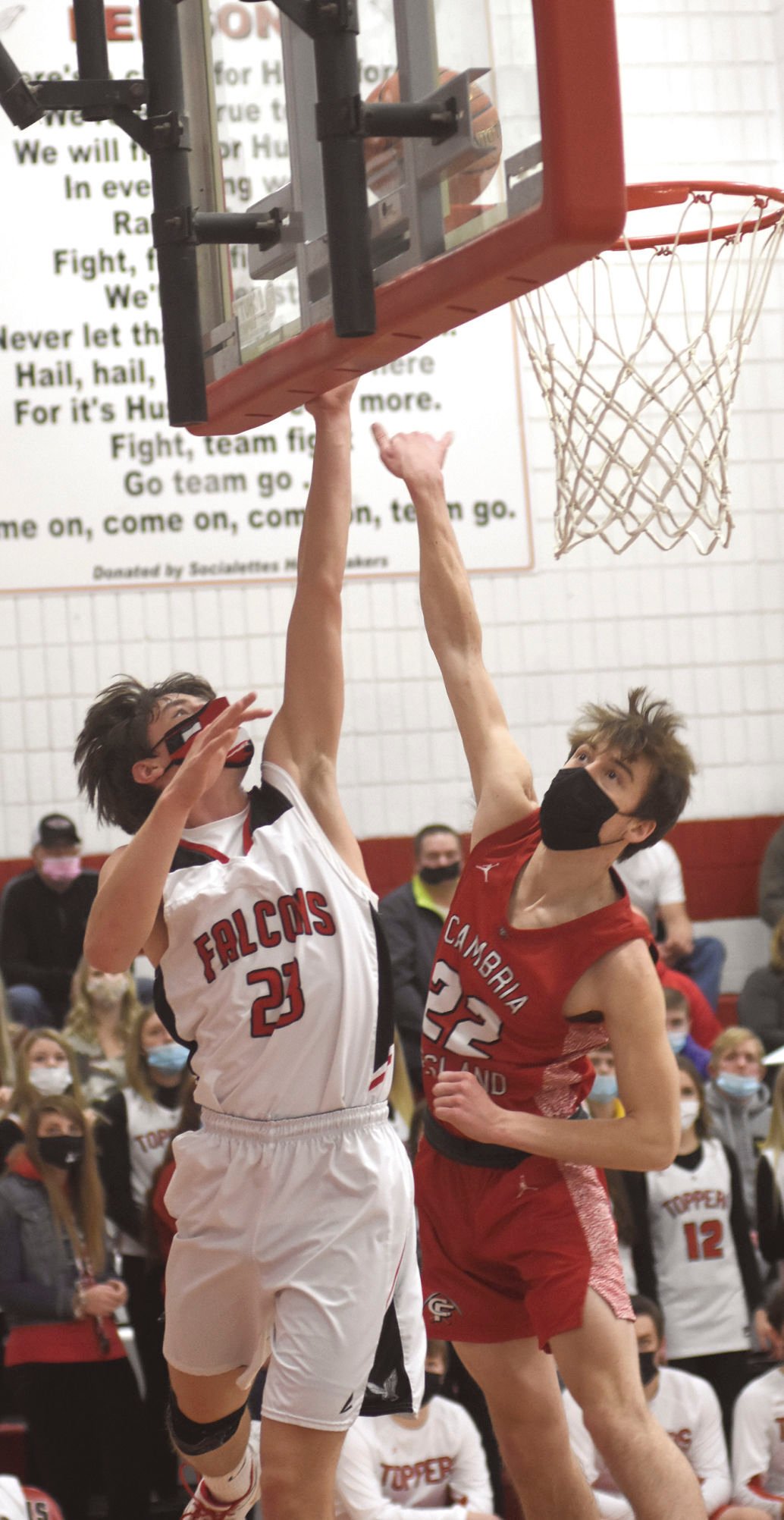 Hustisford junior point guard Gavin Thimm (23) finishes off a baseline drive for two of his 16 points in a regional final against Cambria-Friesland on Saturday in Hustisford. The Falcons won 59-53. 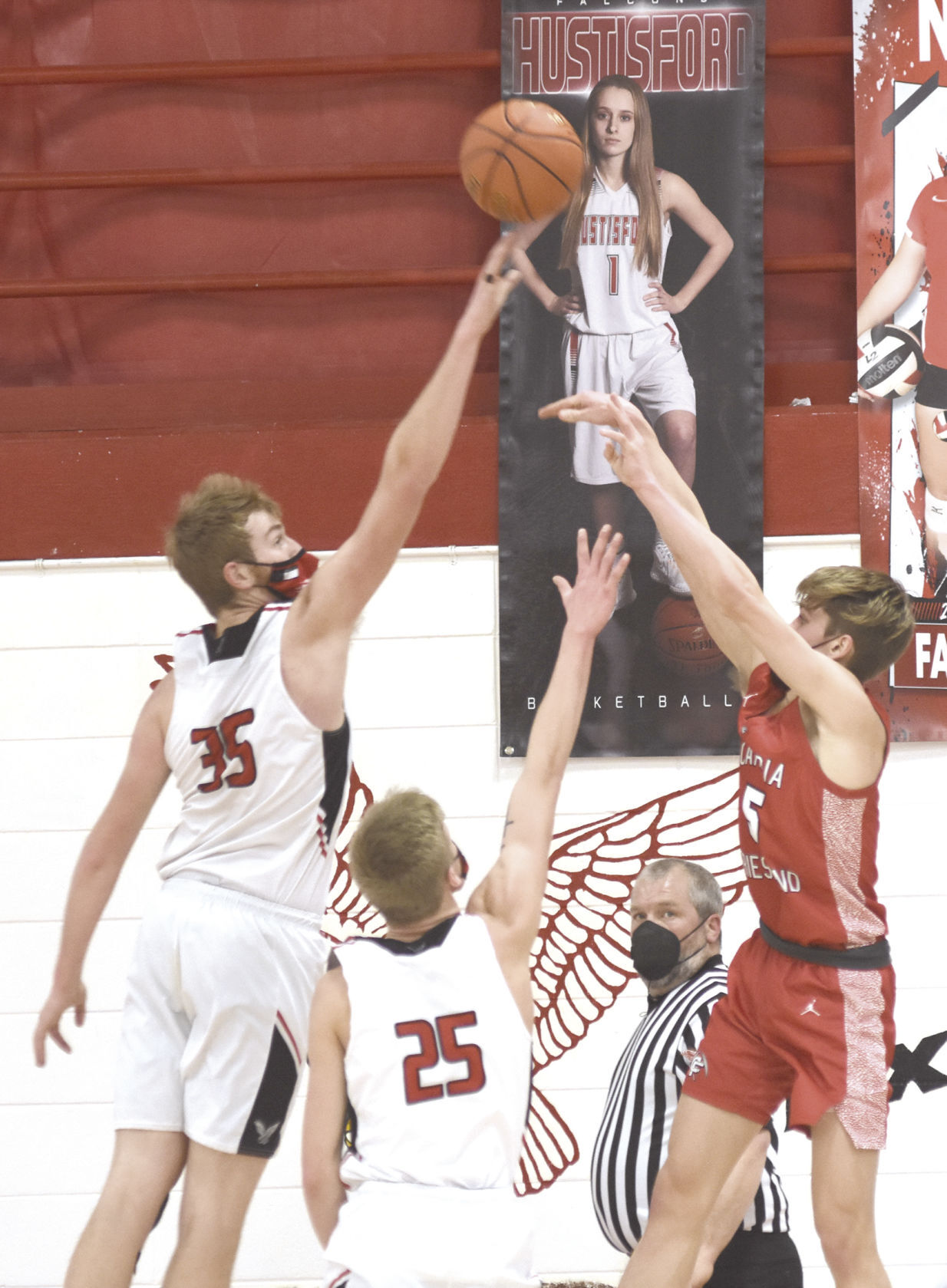 Hustisford senior center Alex Eggleston (35) and senior guard Dylan Kuehl (25) defend a shot attempt by Cambria-Friesland's Drake Burmania during a regional final in Hustisford on Saturday. Eggleston scored 12 points and grabbed six rebounds for the Falcons in a 59-53 victory.

Hustisford senior guard Dylan Kuehl celebrates with junior forward Blake Peplinski after Peplinski scored to set up a three-point play opportunity in the second half of a regional championship game against Cambria-Friesland at the Falcons’ Nest on Saturday. Kuehl scored 16 points and Peplinski added 10 for the Falcons as part of a 59-53 victory.

Hustisford junior point guard Gavin Thimm (23) finishes off a baseline drive for two of his 16 points in a regional final against Cambria-Friesland on Saturday in Hustisford. The Falcons won 59-53.

Hustisford senior center Alex Eggleston (35) and senior guard Dylan Kuehl (25) defend a shot attempt by Cambria-Friesland's Drake Burmania during a regional final in Hustisford on Saturday. Eggleston scored 12 points and grabbed six rebounds for the Falcons in a 59-53 victory.

HUSTISFORD — Cambria-Friesland brought a quick, tough brand of defense and a pair of prolific scorers to the Falcons’ Nest.

It wasn’t enough to match Hustisford’s depth and chemistry, which have been forged in a winning tradition.

Top-seeded and top-ranked Hustisford won the program’s fifth regional championship in the past seven seasons with a 59-53 win over second-seeded Cambria-Friesland on Saturday night.

Senior guard Dylan Kuehl and junior point guard Gavin Thimm each scored 16 points to lead four players in double figures for Hustisford, which improved to 14-3 on the season.

“(Winning regionals again), it just says we love to play, and we love to play hard,” Kuehl said. “We leave it all on the court. It’s amazing to be on a team of guys like this.”

Thimm set the tone early, creating his own shot off the dribble twice for jumpers to give Husty a 4-0 lead. He finished with 11 of his points in the first half, including a 3-pointer and a baseline drive.

“Gavin Thimm really stepped up tonight,” Kuehl said. “He was hitting amazing shots for us. He was very smart with it.”

Thimm also dished out four assists, plus two more after the game.

Cambria-Friesland (19-6) kept pace in the early going with senior guard Kobe Smit, who scored 13 of his 21 points in the first half, including three of his four 3-pointers on the night. His second triple of the night gave the Hilltoppers their last lead in the game, up 13-11 with 9 minutes, 21 seconds left in the half.

“Smit’s a great player,” Kuehl said. “We knew we had to contain him, so we did our best.”

The Hilltoppers were more quick and aggressive than they looked on film, according to Hustisford boys basketball coach Otto Hopfinger said. In addition to keying on Kuehl, they collapsed on senior center Alex Eggleston and stuffed him three times in the opening minutes. That set up transition scoring the other way, but the Falcons believed in their big man and kept feeding him.

Eggleston scored his first basket to put Husty up 11-10, and his second basket off an assist from Thimm moved Husty in front for good. Eggleston scored again off a cutback as part of an 8-0 run that gave the Falcons a 19-13 lead. He finished with six points in each half for 12 and added six rebounds.

“It didn’t feel good getting stuffed, obviously,” Eggleston said. “I wasn’t in the right place at the right time. I just had to step out, so we could get the right players scoring and then we came back and got the win. That’s all the matters.

“Going up against them was tough. We had a good game against Fall River. Cambria-Friesland really stepped it up. I wasn’t ready for it with them collapsing on me, but I was able to get the points later and we were able to get the win.”

Kuehl was balanced with nine points in the first half and seven after the break. He got in the scoring column with a 5-footer in the lane off an inbounds pass to tie the game at 13-13. He later blocked a shot and scored a layup on the other end to give the Falcons their biggest lead of the first half, up 25-16. He ended the half with a 3-pointer from the corner and a drive to the basket with 12 seconds to go to send Husty in the locker room leading 30-23.

“It was hard for us to keep our offense running smoothly,” Hopfinger said. “It’s almost better to have a game like this, with some adversity you have to battle through. If you can’t battle through it, you don’t deserve to win. We showed that we were strong. (Our guys) didn’t let the little things make them fold.

“Gavin had confidence in that shot and he was knocking it down. That set the tone for us to know we could win this game. We needed someone to step up and give us confidence. We knew they were going to try to take away Dylan Kuehl. Once they started trying to take away Gavin, Dylan went to town.”

Thimm opened the second half by converting a halfcourt steal to push the lead back to nine, but the Hilltoppers also refused to fold. Senior forward/center Griffin Hart quietly celebrated scoring his 1,000th career point with family and friends after the game, and it felt like he scored half of those points in the second half alone. He poured in 18 of his game-high 22 points over the final 18 minutes with tough shots in the lane.

“We just couldn’t quite seem to stop 23 (Hart), but it ended up working out, so we were all pretty happy with that,” said Hustisford junior forward Blake Peplinski.

Peplinski’s three-point play off an assist from Kuehl with 16:31 left in regulation gave Husty its biggest lead of the game 35-25. The Hilltoppers answered with a 12-3 run to pull within a point at 38-37 with 10:56 to go. Smit hit two jumpers off the dribble, senior guard Cade Burmania converted a steal in the halfcourt and Hart capped the run by splitting two defenders inside.

Cambria-Friesland had three chances to take the lead, but missed 3s on each possession. The Falcons were willing to live with Hart’s inside points as long as Smit and Burmania were held in check beyond the arc.

“That was our game plan going into the second half, take away their 3s and try to close out on them faster so they couldn’t get their 3s off like they did in the first half,” Thimm said. “That’s a big thing our coach stressed all year was defense, defense, defense. He really wants us to just keep playing hard defense the whole game. Never take a possession off, that’s our motto this year. That’s just what kept us in it was tough defense.”

But Hustisford also needed to make a few more plays on offense to pad the lead. With the game tightening up, six Falcons provided the points.

Eggleston hit two free throws and scored off an assist from Peplinski to push Husty’s lead back to 42-37. When C-F pulled back within one, Kuehl scored off a drive and Thimm scored in transition.

“It was good to swing the ball, and take our time,” Eggleston said. “If we needed to take a minute off the clock, we did that in order to get a good shot.”

“We have a lot of big guys,” Kuehl said. “Alex, Blake, Brody (Thimm), they all know the short corner is going to be there, so just be patient with it and me and Gavin will get the ball to them down there.”

Peplinski scored eight of his 10 points down the stretch, the best being a floater in the lane. He also grabbed a team-high seven rebounds.

“Those were huge points by Blake,” Hopfinger said. “He had ice in his veins, to be able to take the bull by the horns and not back off, not be shy. Huge for us. That is what the other team did not count on, other plays like that.”

Hart’s putback cut Husty’s lead to 53-50 with 1:15 left, but Peplinski capped a strong night by converting a long outlet pass like the wide receiver he is in football. The Falcons reached the bonus with two minutes remaining and made 5-of-8 foul shots to ice the game.

“Dylan and Gavin really stepped up,” Peplinski said. “Everybody else was doing their part. Eggy was really helping us with rebounds down low. We have a very strong bond on the team. None of us have any beef with each other. We all get along great. We’re just a big family. We all play well. We all set screens when we need to. We all know who needs the ball in the (crunch time) minutes. We play well under pressure.”

Hustisford will play a sectional semifinal on Thursday at 7 p.m. It’s become a tradition to play in these games for this program.

“It starts from seventh and eighth grade and moves up from the junior varsity,” Hopfinger said. “We continue it on. These guys have gone through the program, and they believe they can get it done. I’ve had the pleasure of coaching all these seniors when they were freshman and I knew they were going to be special. The next year, I knew that junior class was going to be special, too. We’ve had a lot of success at the JV level before this. To just see it happen on the varsity level now, its what its all about. Hopefully, we can continue to keep building. It’s really fun and the boys are buying into it. They are all believing.”

Hustisford received the No. 2 seed for the sectional and will host third-seeded Stockbridge in a sectional semifinal. Top-seeded Monticello hosts fourth-seeded Shullsburg in the other semfinal.