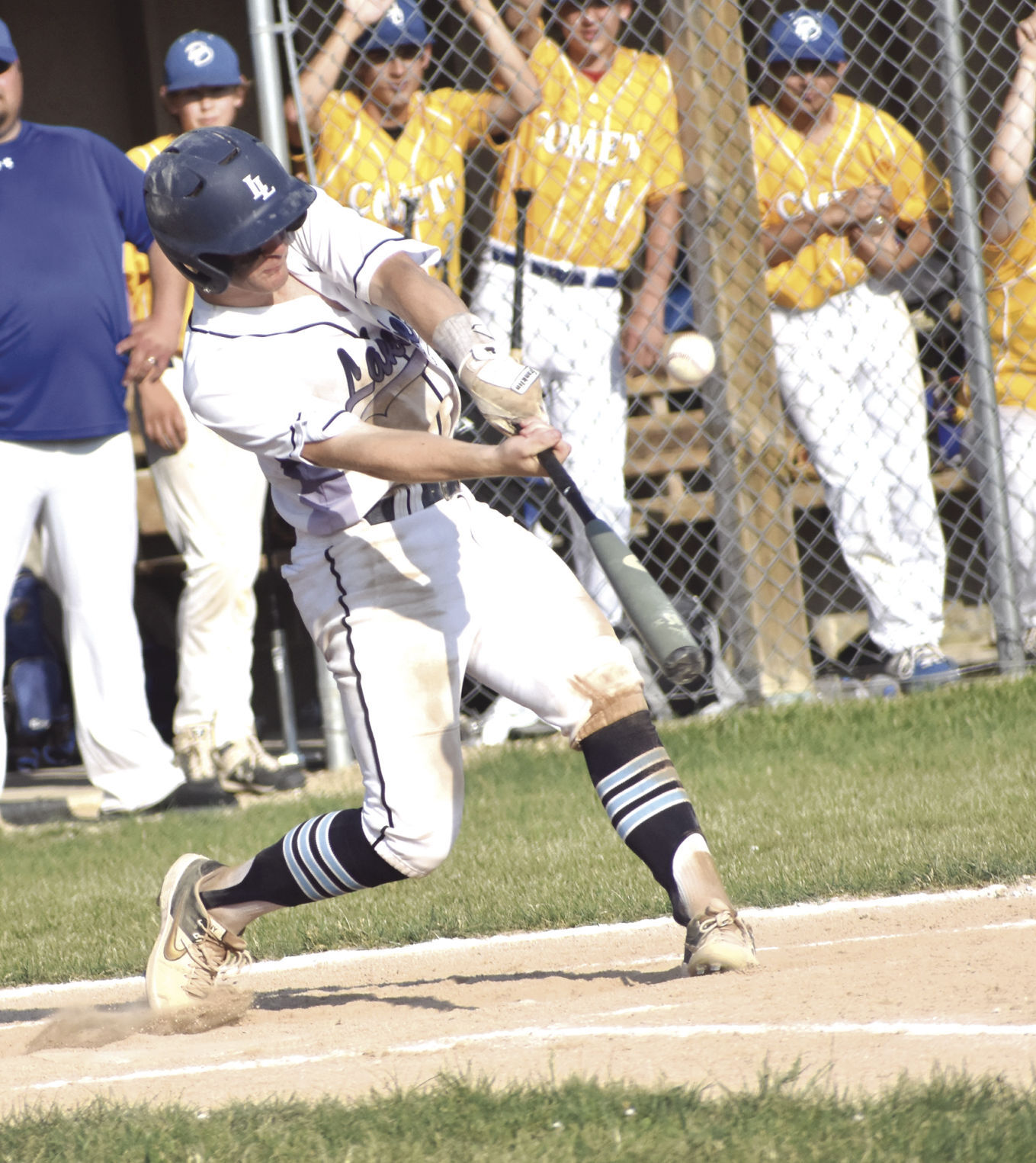 Lakeside Lutheran catcher Nate Yaroch hits during the team’s WIAA Division 2 regional quarterfinal home game against Delavan-Darien on Thursday. The Warriors won 3-2 on Yaroch’s walk-off single in the seventh. Yaroch was 2-for-4. 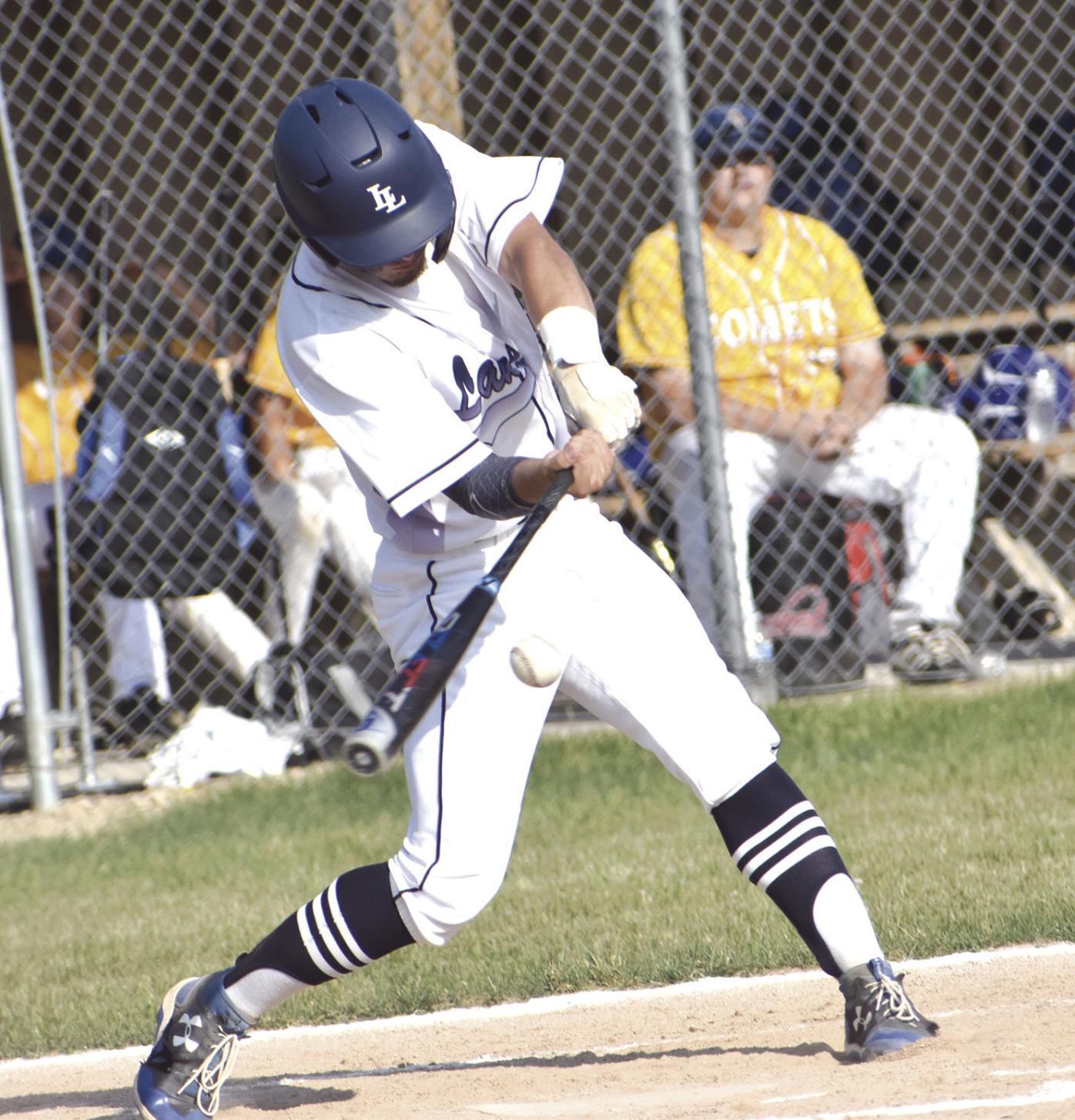 Lakeside Lutheran shortstop Nathan Chesterman hits during the team’s WIAA Division 2 regional quarterfinal home game against Delavan-Darien on Thursday. The Warriors won 3-2 and Chesterman doubled in the sixth, scoring the tying run on a wild pitch.

Lakeside Lutheran catcher Nate Yaroch hits during the team’s WIAA Division 2 regional quarterfinal home game against Delavan-Darien on Thursday. The Warriors won 3-2 on Yaroch’s walk-off single in the seventh. Yaroch was 2-for-4.

Lakeside Lutheran shortstop Nathan Chesterman hits during the team’s WIAA Division 2 regional quarterfinal home game against Delavan-Darien on Thursday. The Warriors won 3-2 and Chesterman doubled in the sixth, scoring the tying run on a wild pitch.

LAKE MILLS — Things looked ominous for the Warriors in a tie game as the Comets loaded the bases with no outs in the sixth.

The third-seeded Lakeside Lutheran baseball team was able to limit the damage in the sixth, tying it up in the bottom of the inning, before Nate Yaroch hit a walk-off single with two outs in the seventh of a 3-2 WIAA Division 2 regional quarterfinal victory over sixth-seeded Delavan-Darien at LLHS on Thursday.

Tyler Chopp, out of the nine-spot in the Warriors order, got the wheels turning in the seventh, singling to left with one out. Chopp took second on a wild pitch by Zac Metcalf, advancing to third on a groundout. Then Yaroch dug in for a short stay in the batters box, grounding the first pitch he saw into left to score Chopp and make it final.

“In the seventh the bottom of our lineup gave us a baserunner with one out on a nice piece of hitting by Tyler Chopp,” Lakeside Lutheran baseball coach Phil Dretske said. “He had some nice baserunning on a passed ball and a groundout that left him at third.

“Nate Yaroch has been seeing the ball well at the plate all season, and it was great to see him come through with that clutch two-out single to put the game away.”

Gabe Uttech came on in relief of starter Ian Olszewski, who allowed three hits and an unearned run, striking out six and walking three in five innings, to start the sixth. Neil Janssen reached via an error by Brock Schneider at third base and a single by Alex Papcke and walk to Cole Hanson loaded the bases with no out.

“It was definitely not the way we hoped this game would go, but our guys never gave up,” Dretske said. “Gabe isn’t afraid of anything when he is on the mound. He puts total trust in those around him to make the plays. We got the plays we needed to limit the damage to one run, and Nathan Chesterman gave us that spark we needed to wake up at the plate with the lead off double in the sixth and then coming around to score on a wild pitch to tie things up.”

Chesterman led off the Lakeside (12-8) sixth with a double to left. He then advanced to third on a ground out by Tyler Marty and scored the tying run on a wild pitch.

Uttech worked around a two-out walk in the seventh and earned the decision. He allowed an unearned run on one hit in two frames, walking two and striking out one.

Metcalf took the loss for the Comets (3-15), tossing 6 2/3 innings while giving up eight hits and three earned runs with four strikeouts and a walk.

Papcke had a two-out run-scoring single in the Delavan-Darien first. Lakeside answered in the bottom half when Uttech, who was 2-for-4 and singled to lead off the inning, scored on a Chesterman sacrifice fly.

Olszewski worked around a one-out double by Kiem in the second. The Warriors got a lead off single by Eli Buchta in the fifth and stranded runners at the corners when Yaroch, who was 2-for-4, flew out to right.

“We hope to take this late-game momentum and come out strong against East Troy next week,” Dretske said.

The Warriors play at second-seeded East Troy, which beat seventh-seeded Whitewater 9-4 on Thursday, in a regional semifinal on Tuesday.