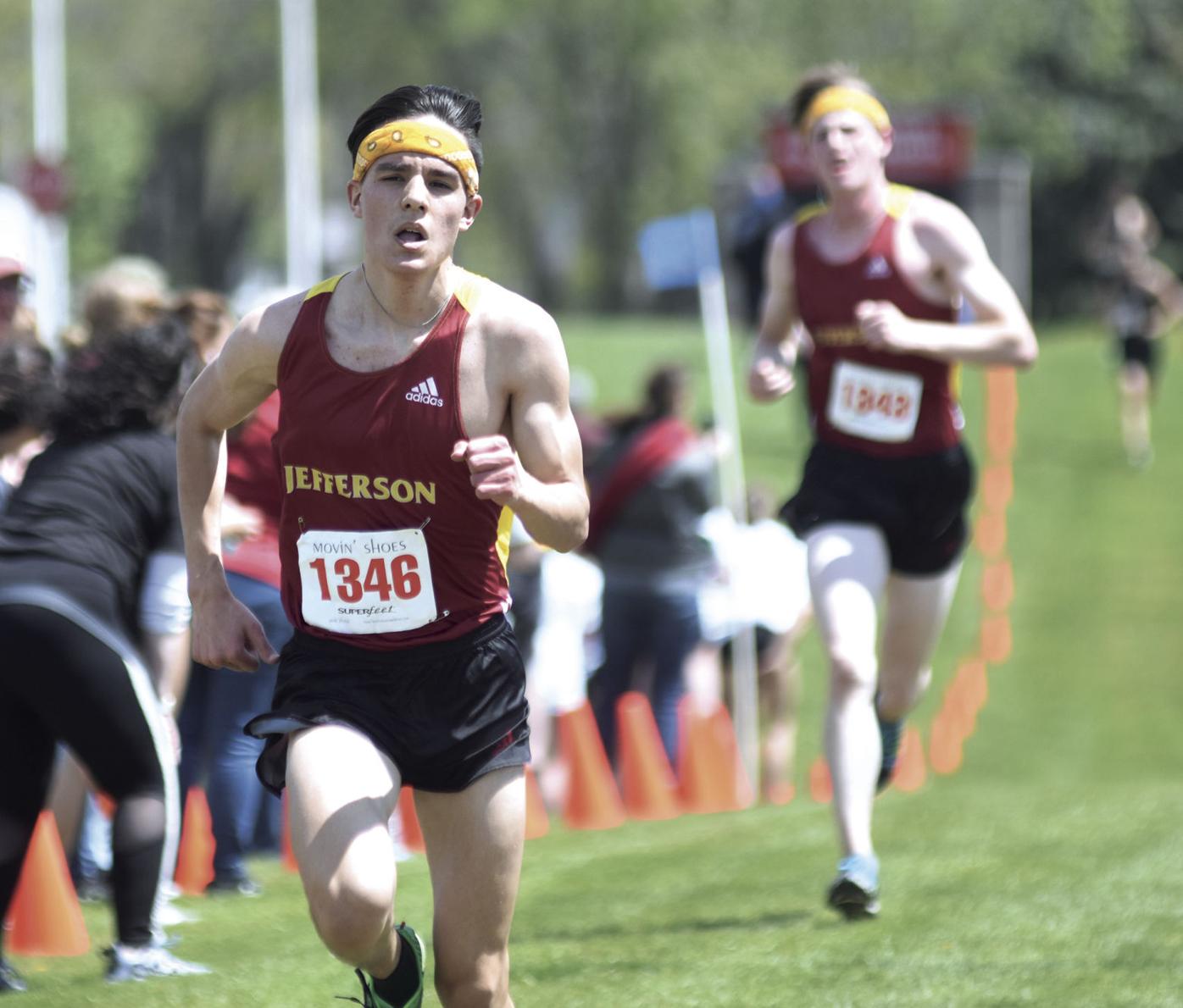 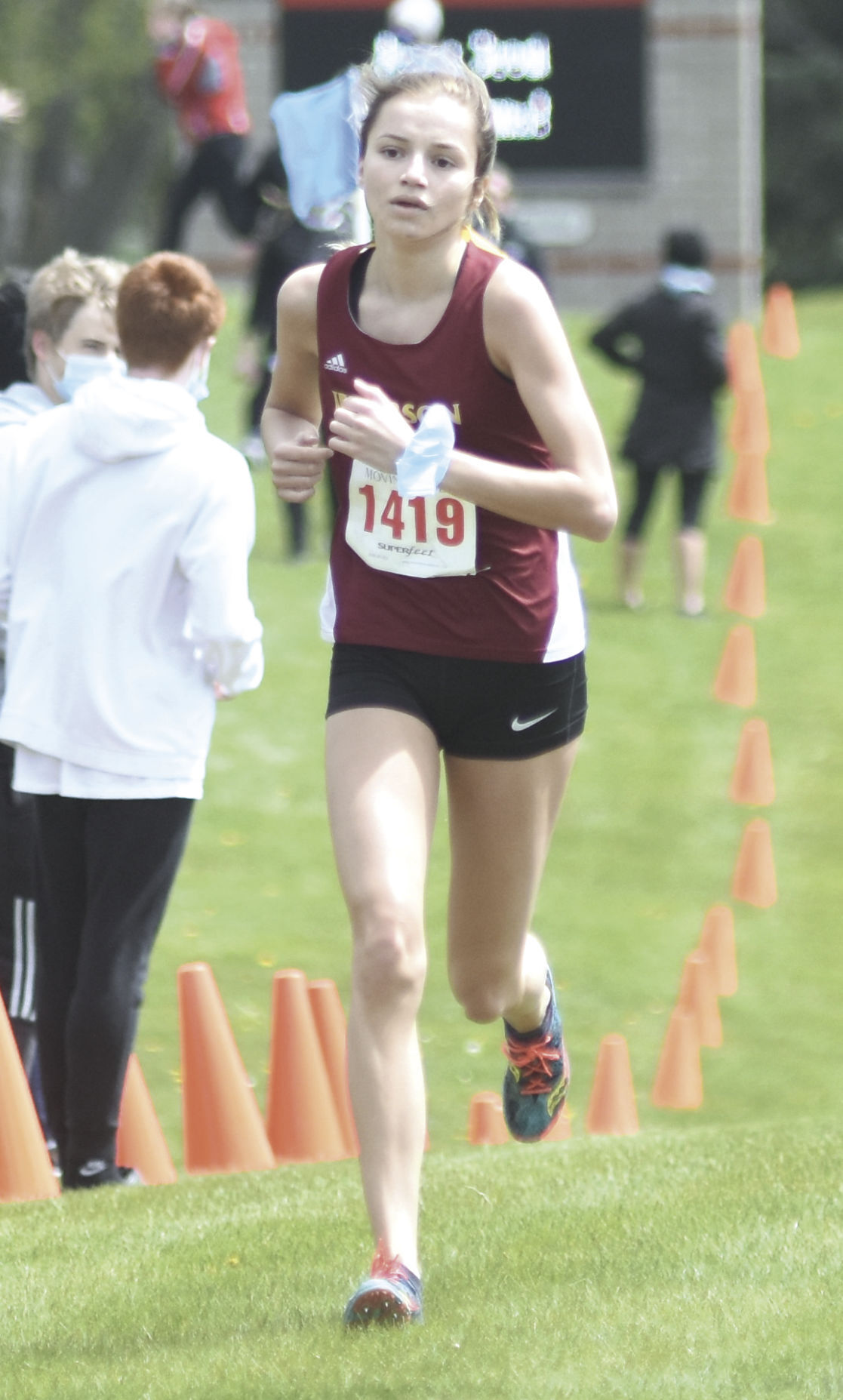 Jefferson senior Makenzie Hottinger earned her fourth consecutive trip to state in cross country with an 11th place finish in the girls race at the Whitewater sectional on Saturday.

Jefferson senior Makenzie Hottinger earned her fourth consecutive trip to state in cross country with an 11th place finish in the girls race at the Whitewater sectional on Saturday.

WHITEWATER — Spring weather in Wisconsin is notoriously fickle, but Mother Nature was in full trickster mode at the Whitewater cross country sectional on Saturday.

“This was challenging,” Whitewater cross country coach Chad Carstens said. “When we were setting up this morning, it was 35 degrees and now it’s over 70, and then there was the wind. I mean, come on.”

Marin’s berth came at the expense of senior teammate Colton Drew, who took ninth in 18:35 and missed out on a fourth consecutive trip to state by just two seconds.

Jefferson senior Makenzie Hottinger did manage to book a fourth straight trip to state by placing 11th in the girls race in 22:45.

“Makenzie Hottinger has been coming on really strong in her last two races,” Jefferson cross country coach Megan Carstens said. “I’m excited for her that she gets another opportunity to compete at the State Meet next weekend. She put herself in a qualifying position early in the race and fought through the last two miles. She was a girl on a mission out there and nobody was going to stop her from accomplishing her goal.”

Manitowoc Lincoln won the boys team title with 46 points, led by sophomore Mason Gates’ winning time of 17:38. Fond du Lac earned the other team berth with a second place score of 57 points. Oshkosh West was a distant third (95), while Jefferson took fourth as a team (123).

“The boys race was totally up in the air,” Megan Carstens said. “I assumed in the back, with 1,200 meters to go, it was Whitewater (senior Trenten Zahn) and our two Jefferson kids. I told those three boys, two of the three of you are probably going to make it, so let’s fight for it.”

Zahn ran the same tactical race at the Rock Valley Conference meet on this same course one week ago, positioning himself on the back end of the top ten over the first mile and then working his way up. He was 50 meters behind Marin and Drew at one point during the first mile, but passed them on the exact same spot on the course and finished the race with another powerful kick.

Marin and Drew prefer to get out hard and try to maintain it. That strategy nearly paid off for both of them.

“I just knew my strategy had to be different,” Marin said. “I had to stick behind lots of different runners. You could definitely feel the entire field shift with people switching places every single time the wind hit. It was definitely a really different experience.”

Marin faded late at the conference meet and finished behind Drew for the first time all season. That fueled him through the heat and high winds in this race.

“I just used that anger the second time around,” Marin said. “I kicked it in so early, probably with 1,200 meters to go and got great distance and snuck my way up into individually qualifying. I feel bad for (Colton). I drafted him a couple times in the race, and I think it really drained him the second time around. He’s happy for me. I’m happy he put in lots of effort and helped me out.”

“Colton and Mason have worked really well together all season and this week,” she said. “They put in a ton of work in the off-season and throughout the season.”

There was little doubt who the power brokers were in the girls race.

Oshkosh West won the team title with 30 points, led by freshman Braelee Jodarski’s winning time of 21:08. Fond du Lac put four runners in the top ten and earned the other team berth with a runner-up score of 35.

That made Hottinger’s mission very clear cut: Stay in orbit of the runners wearing blue or black, and the rest would sort itself out.

“I paced myself off my position and the teams that were good, and I figured I would qualify,” Hottinger said. “So I just ran my best and just paced off of them. It was kind of scary going into the race. I had negative thoughts at first, but I pushed through it. I remembered that I don’t want this to be my last race.

“It was nice that it wasn’t cold out. I felt like the wind negated the heat, but it was still hard to run with it in stretches. We ran at this course two times in the past and it was different weather conditions every time.”

“I think it’s gusting up to 40 miles per hour,” Megan Carstens said. “We talk to our team about what can we control. We can’t control this weather, but we can control our mindset, and our tactics and how hard we fight. Those girls totally fought. You could tell, every step of the way. They gave it all they had. The seniors on our team our going to be missed, but they fought for everything they had and I am proud of them.”