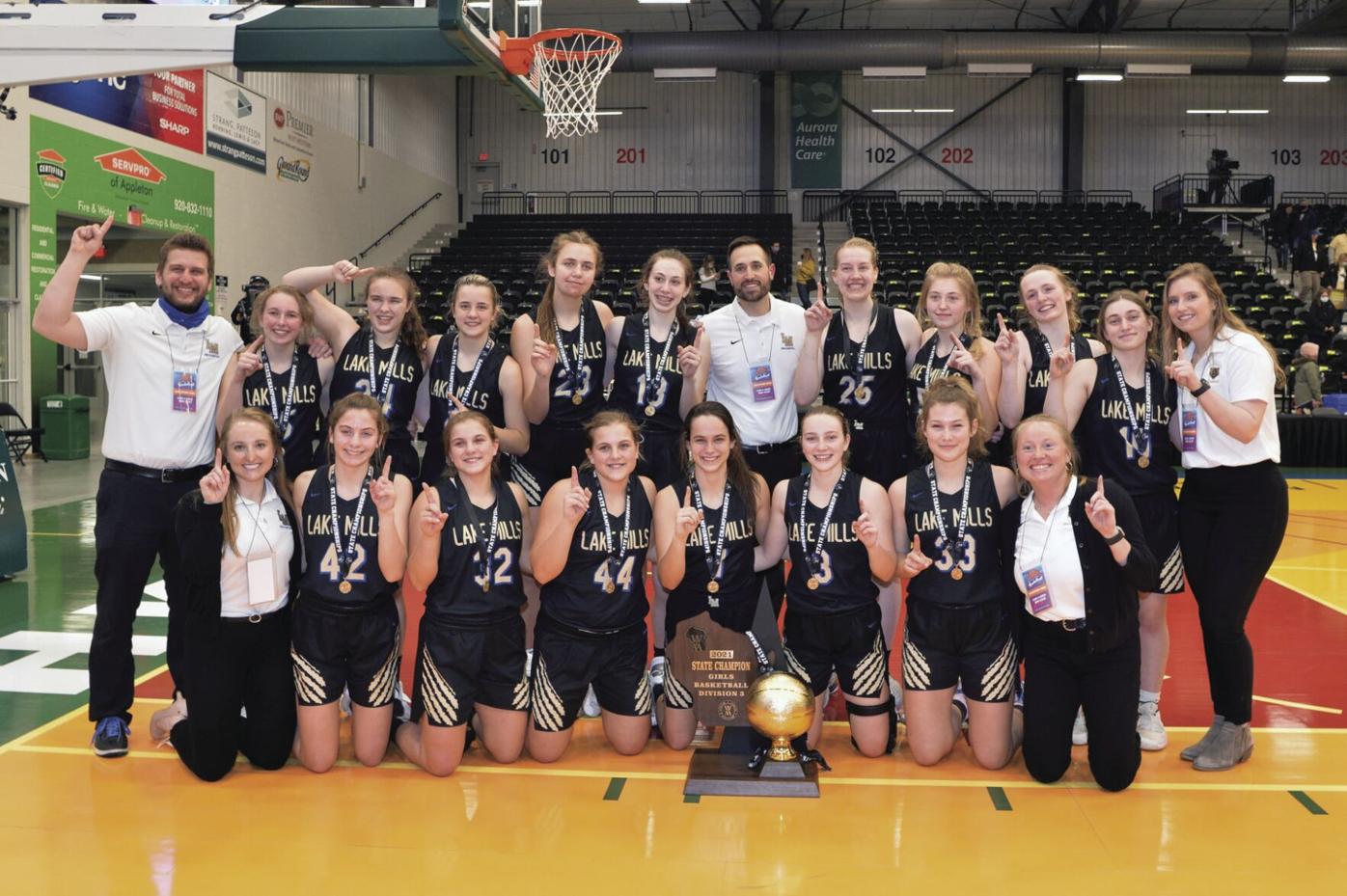 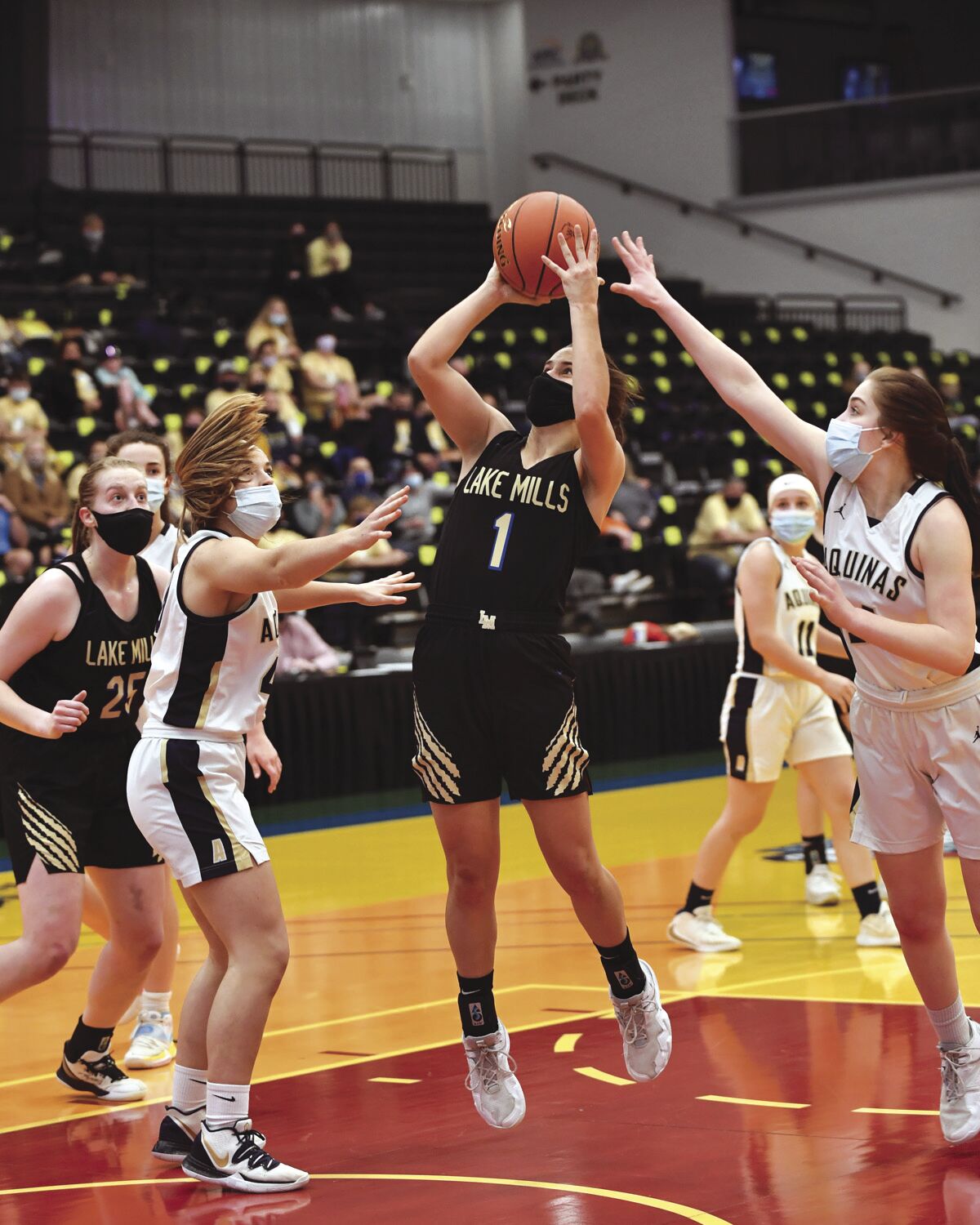 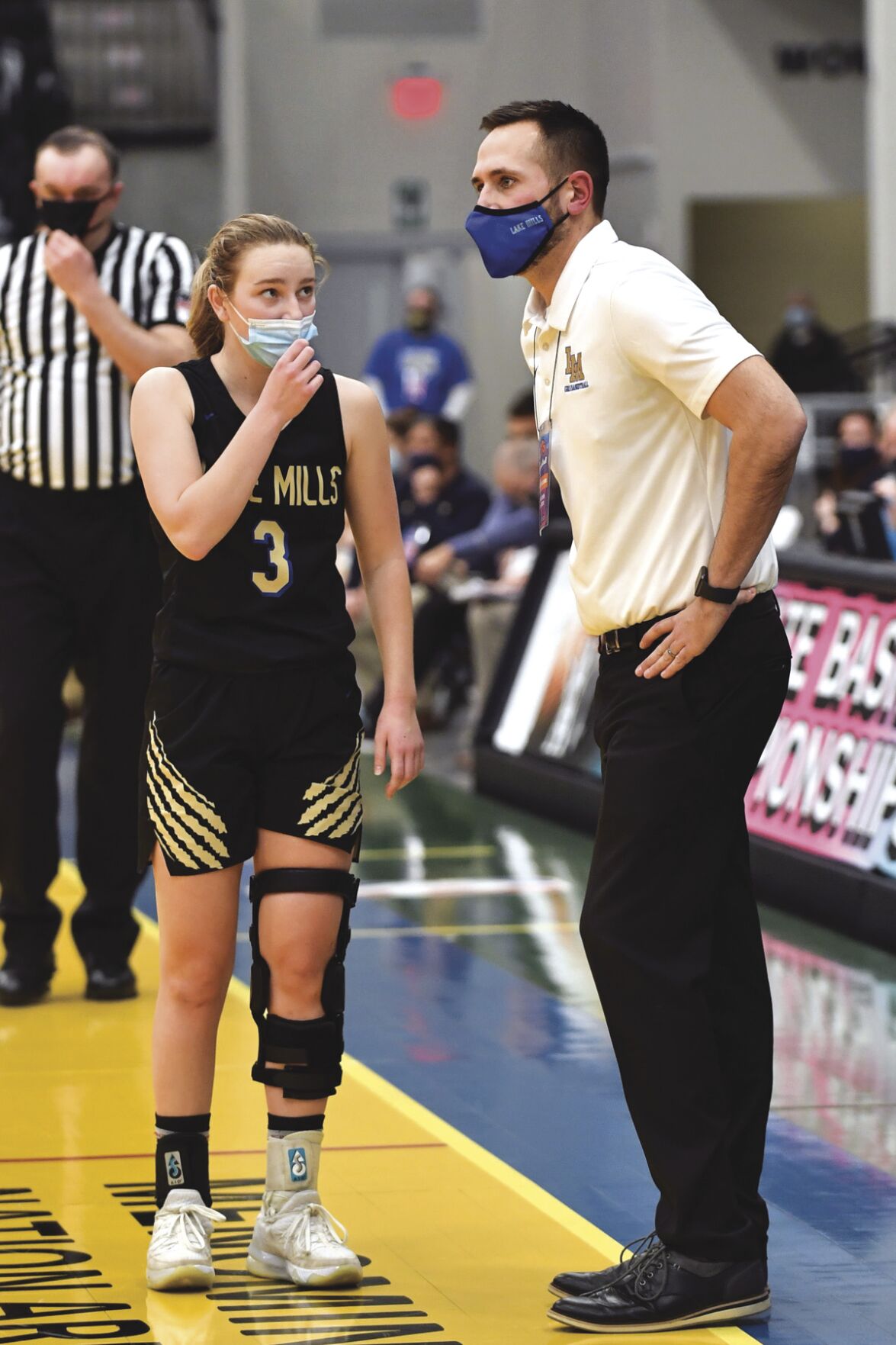 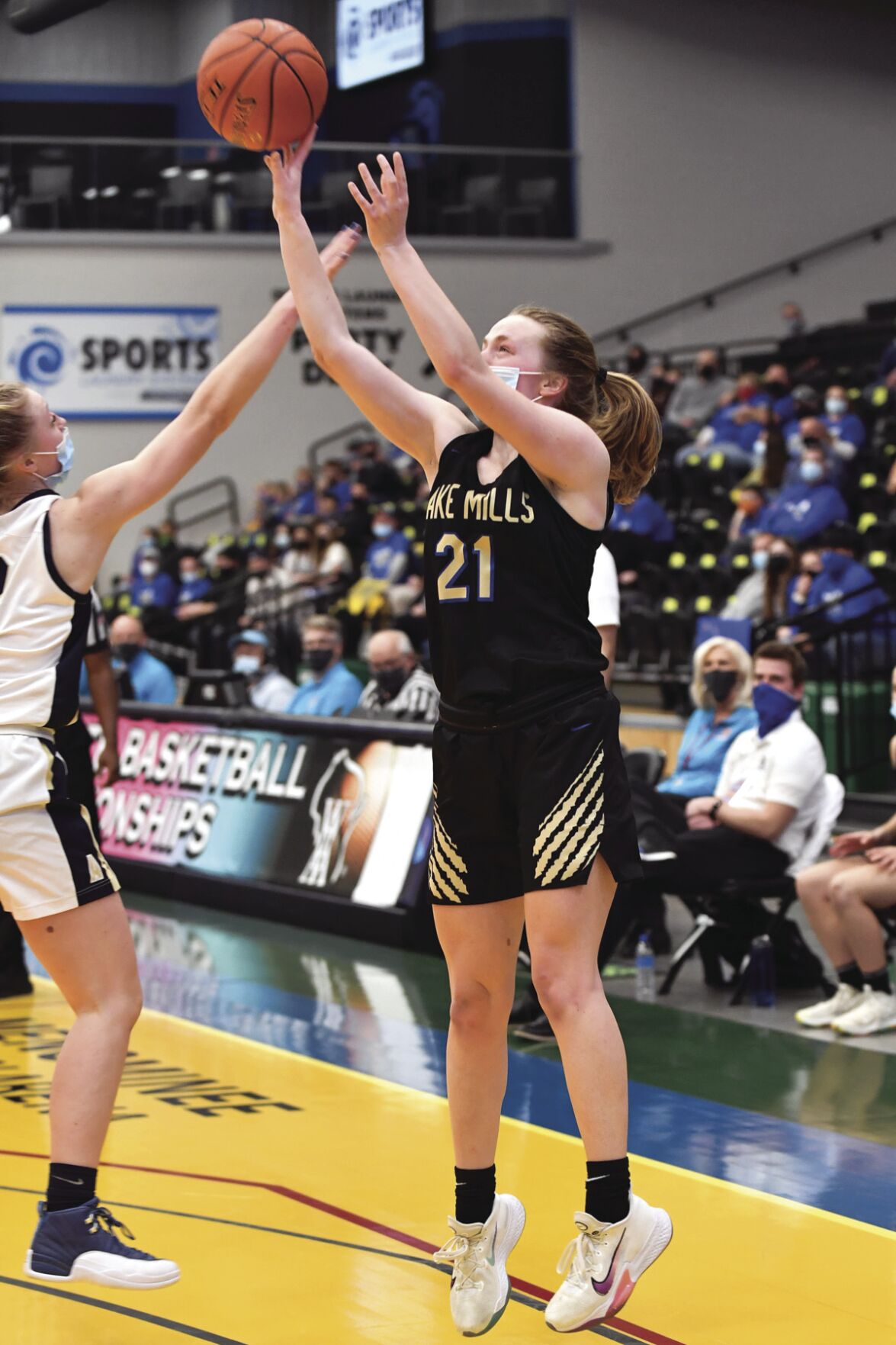 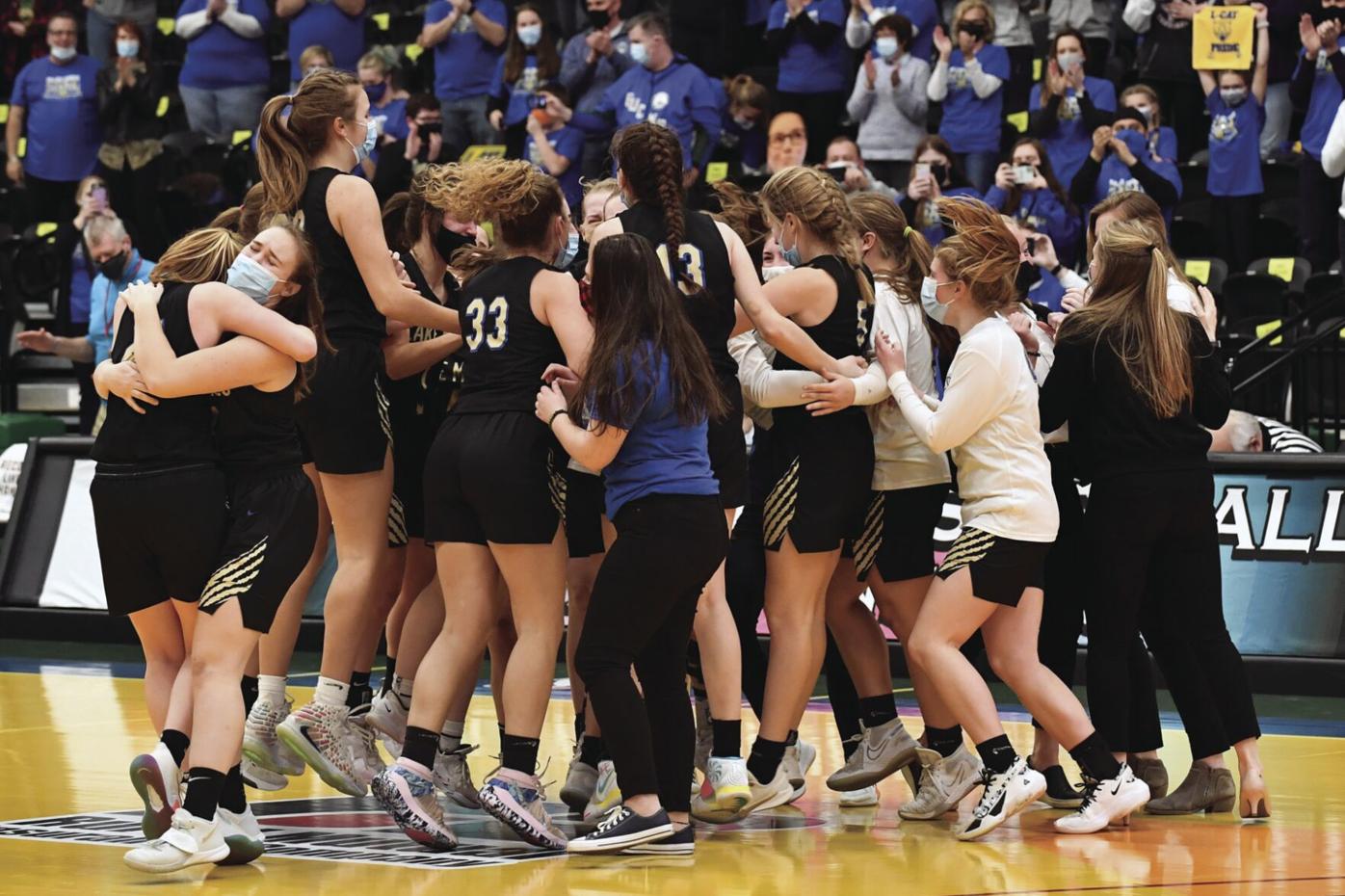 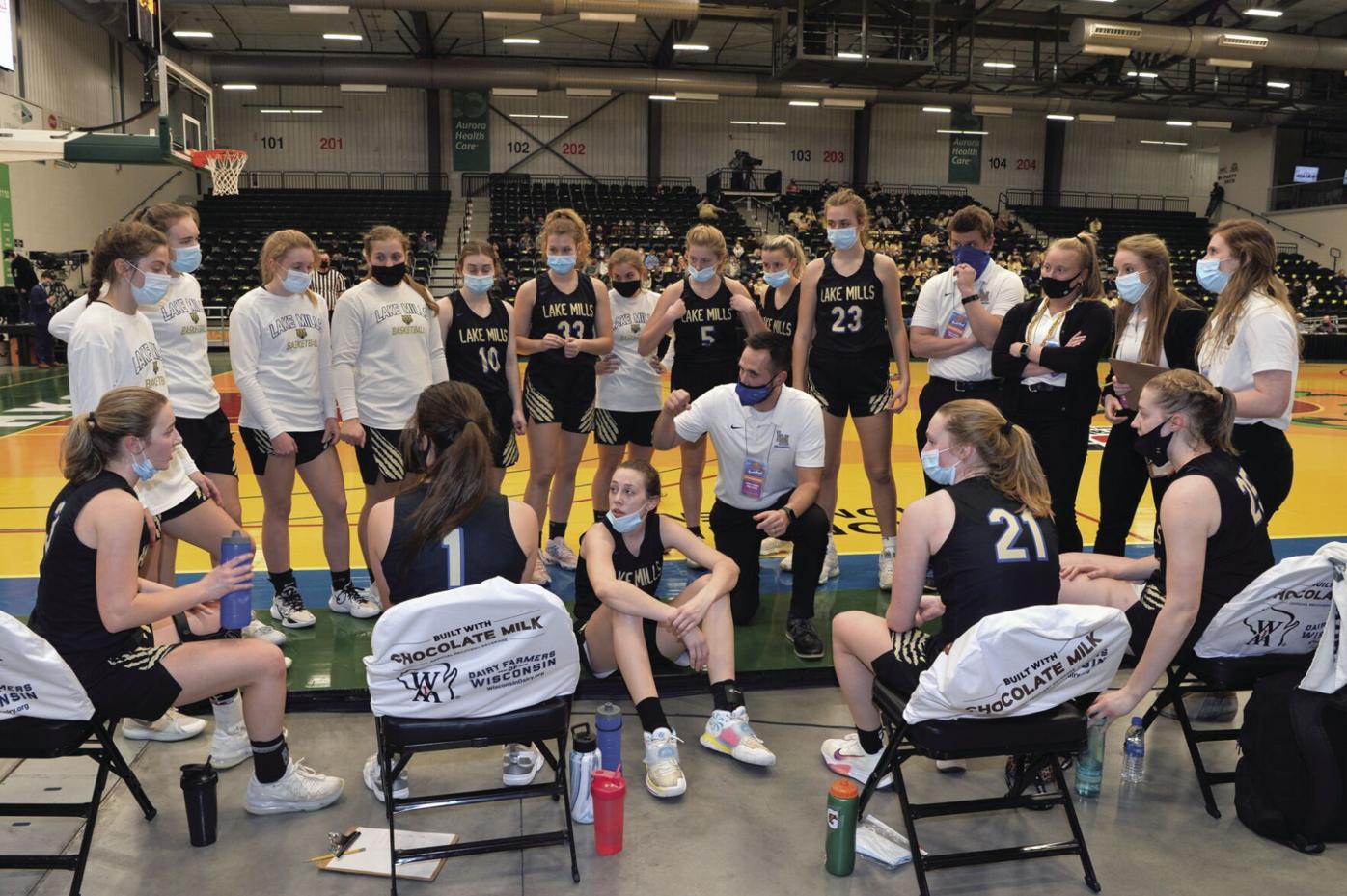 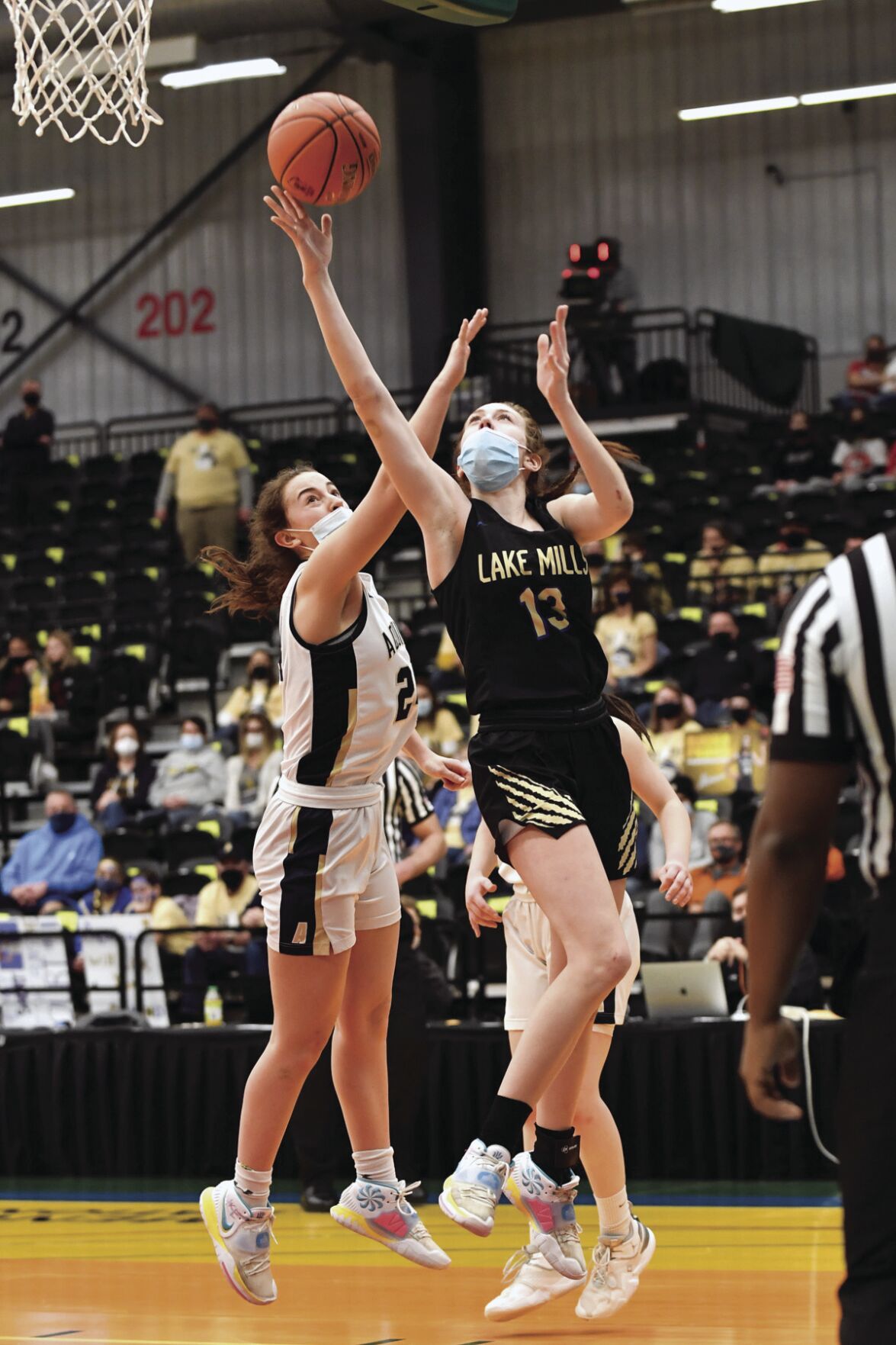 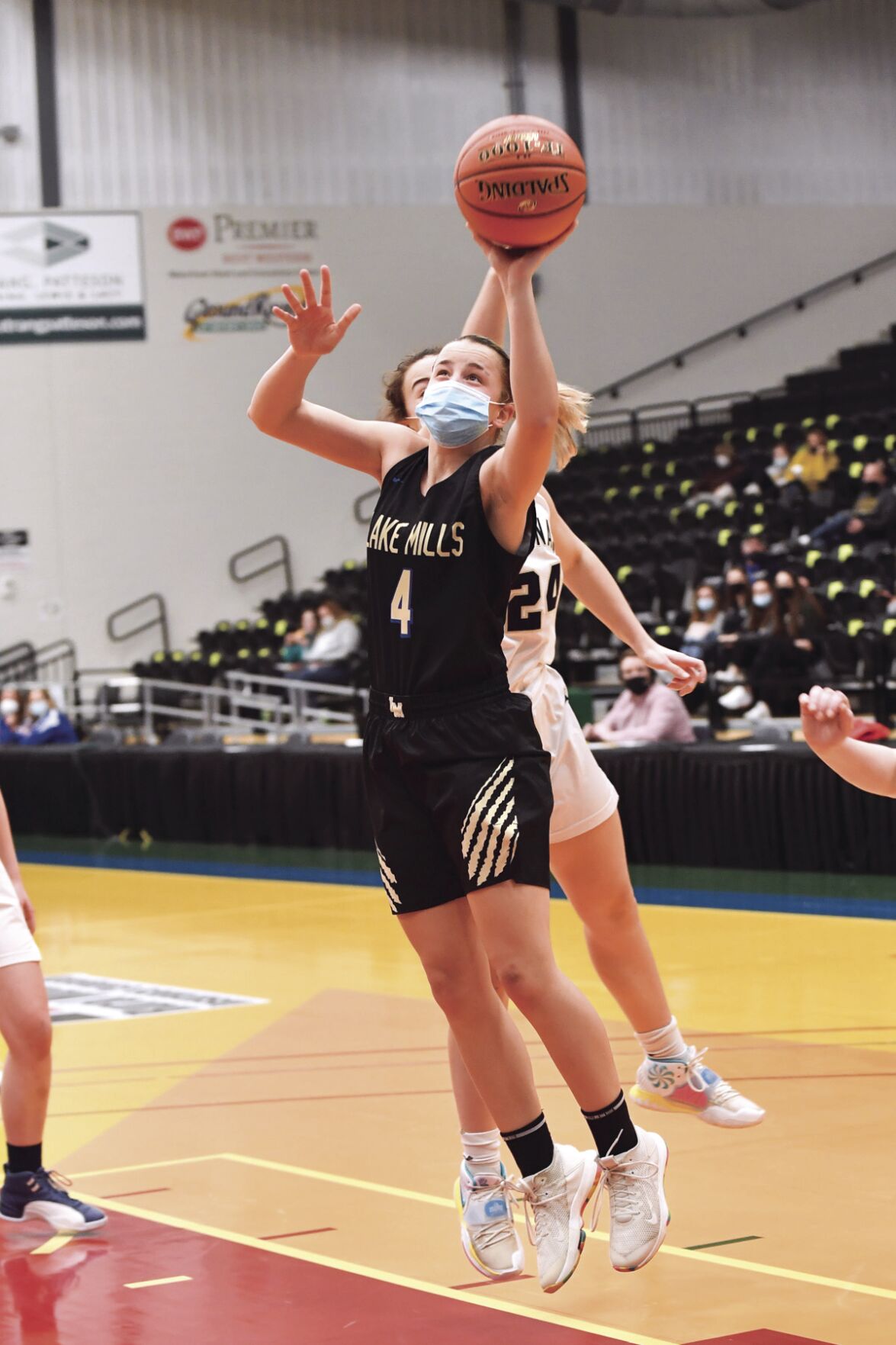 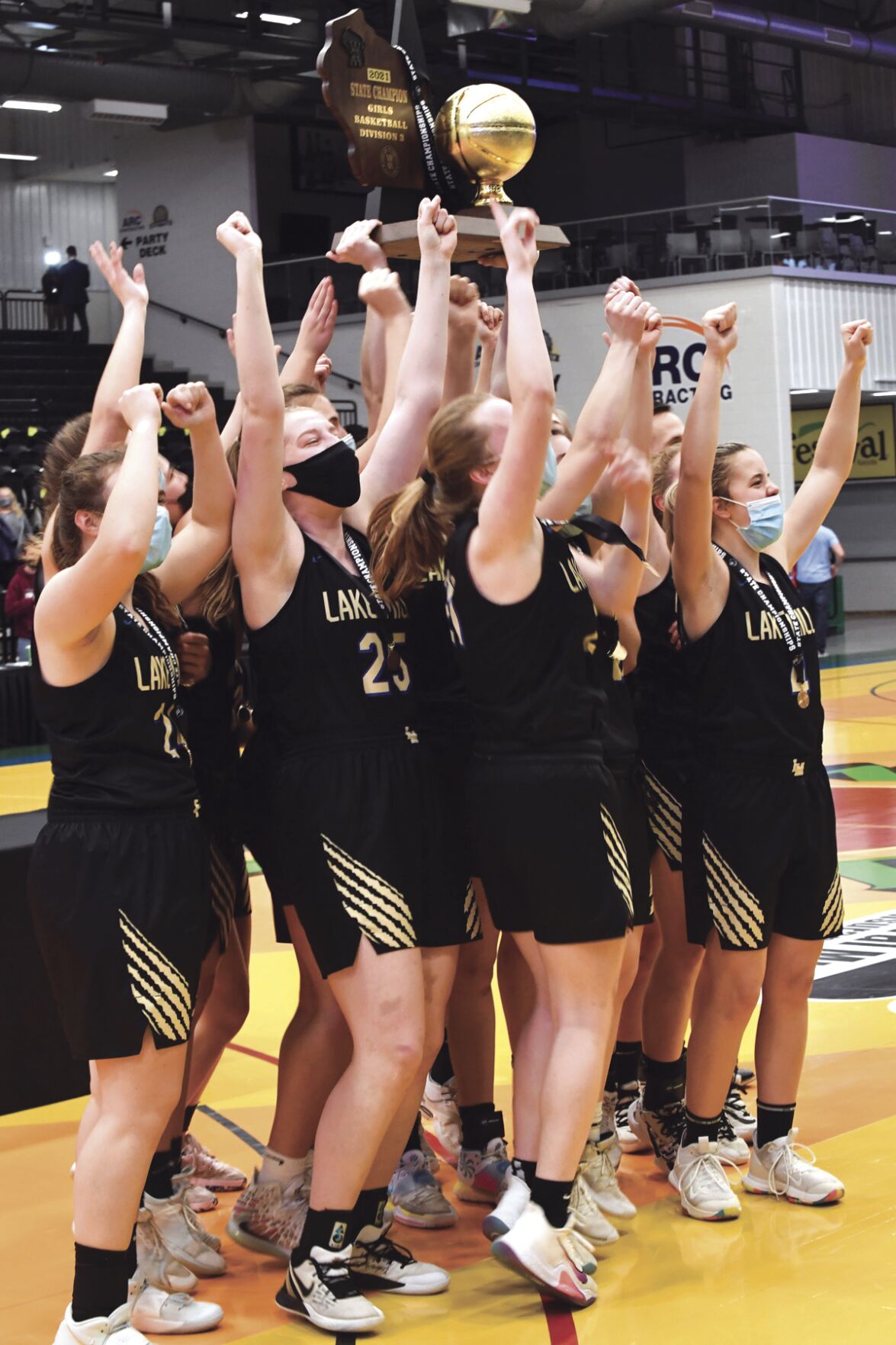 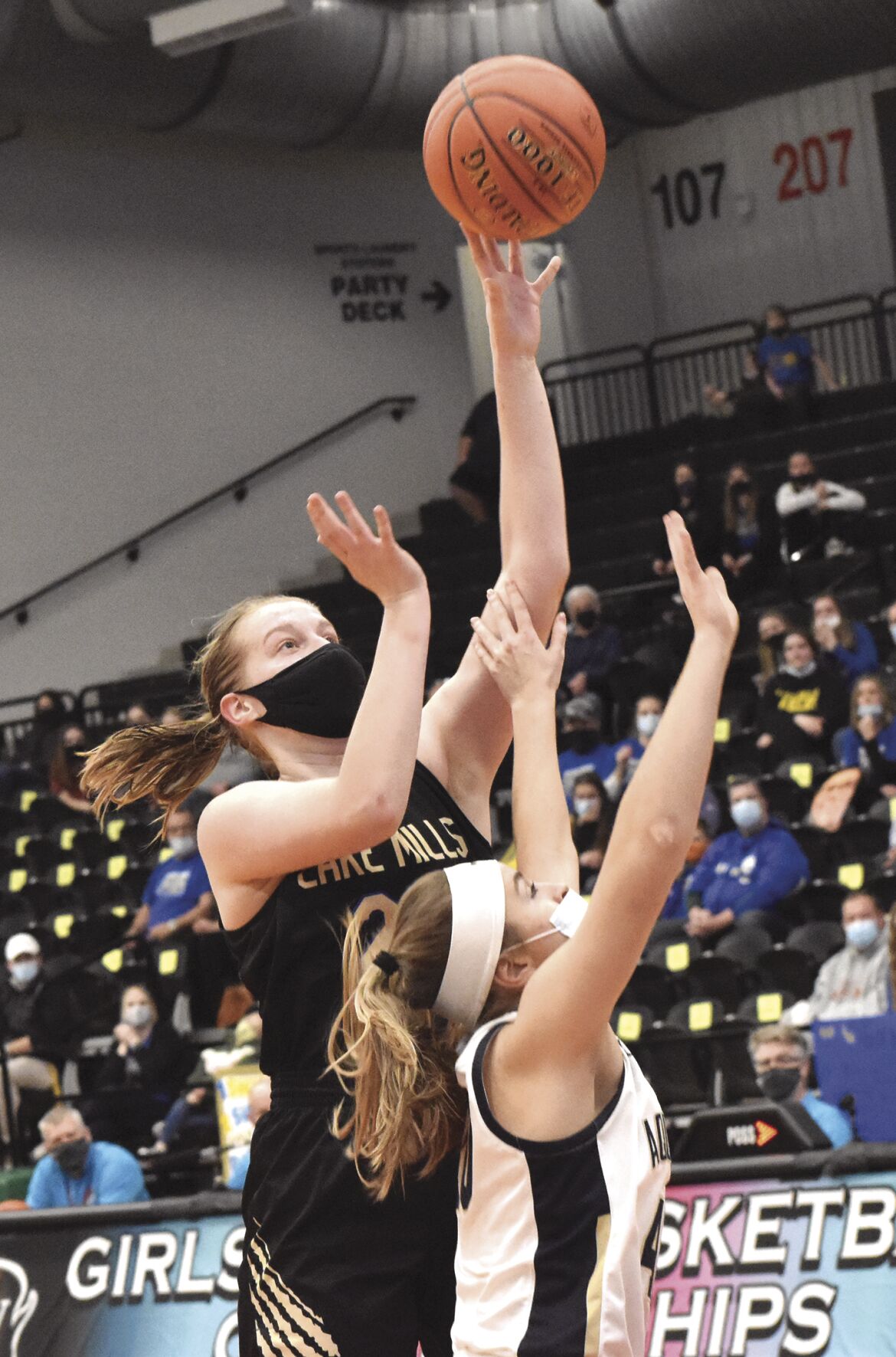 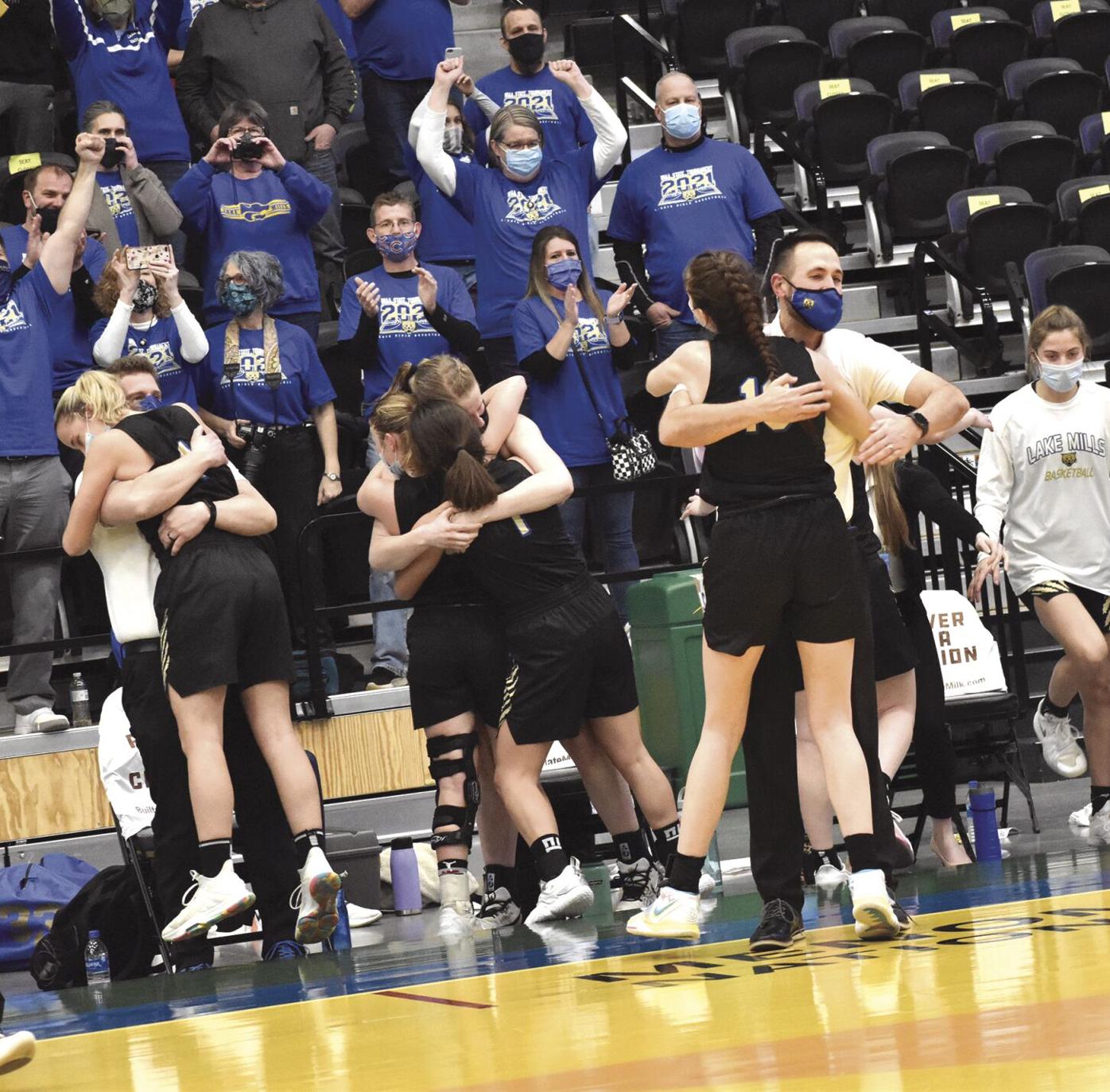 There were hugs all around moments before the Lake Mills girls basketball team clinched the WIAA Division 3 state championship against Aquinas at Menominee Nation Arena in Oshkosh on Friday. The L-Cats won 78-67. 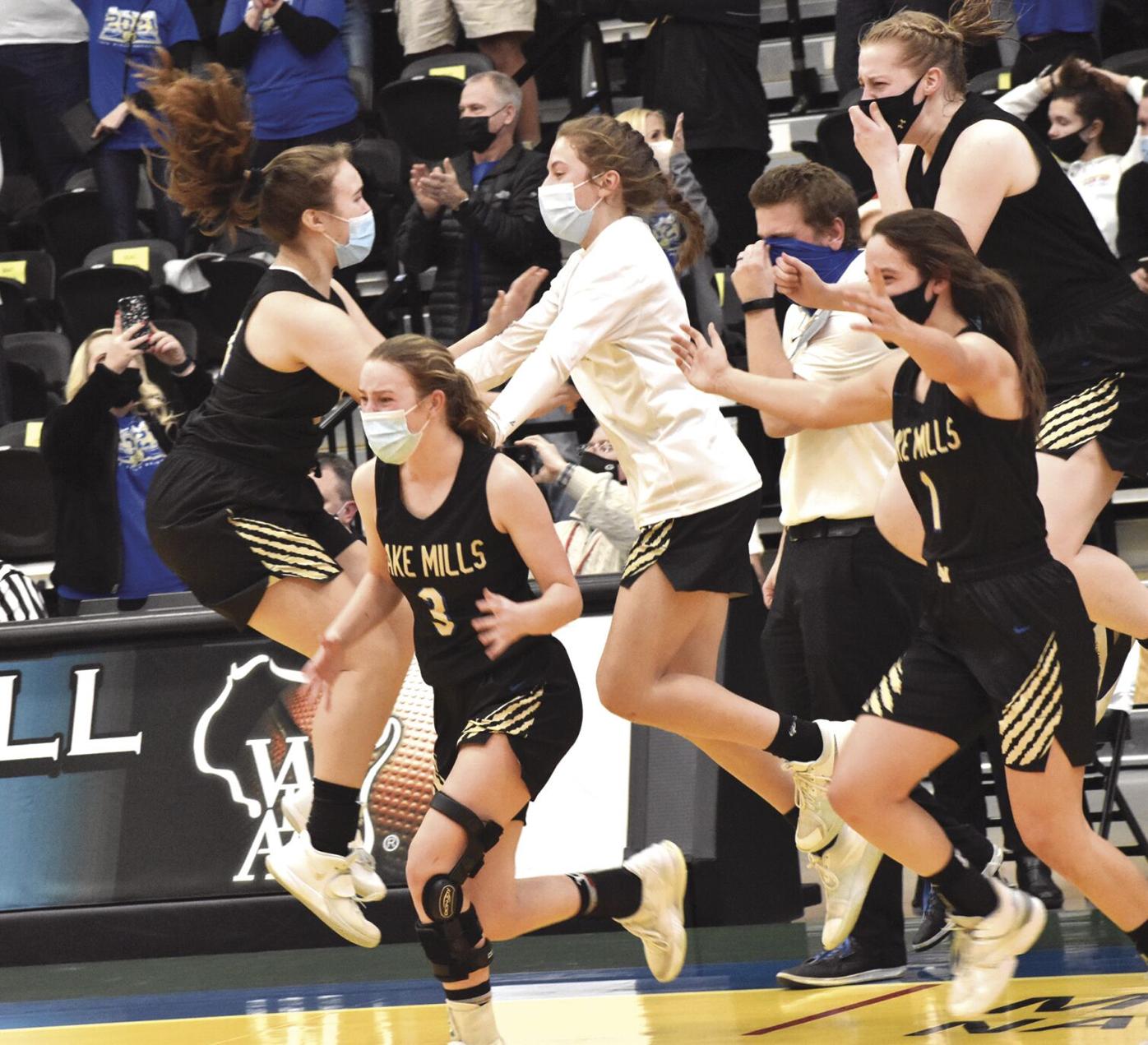 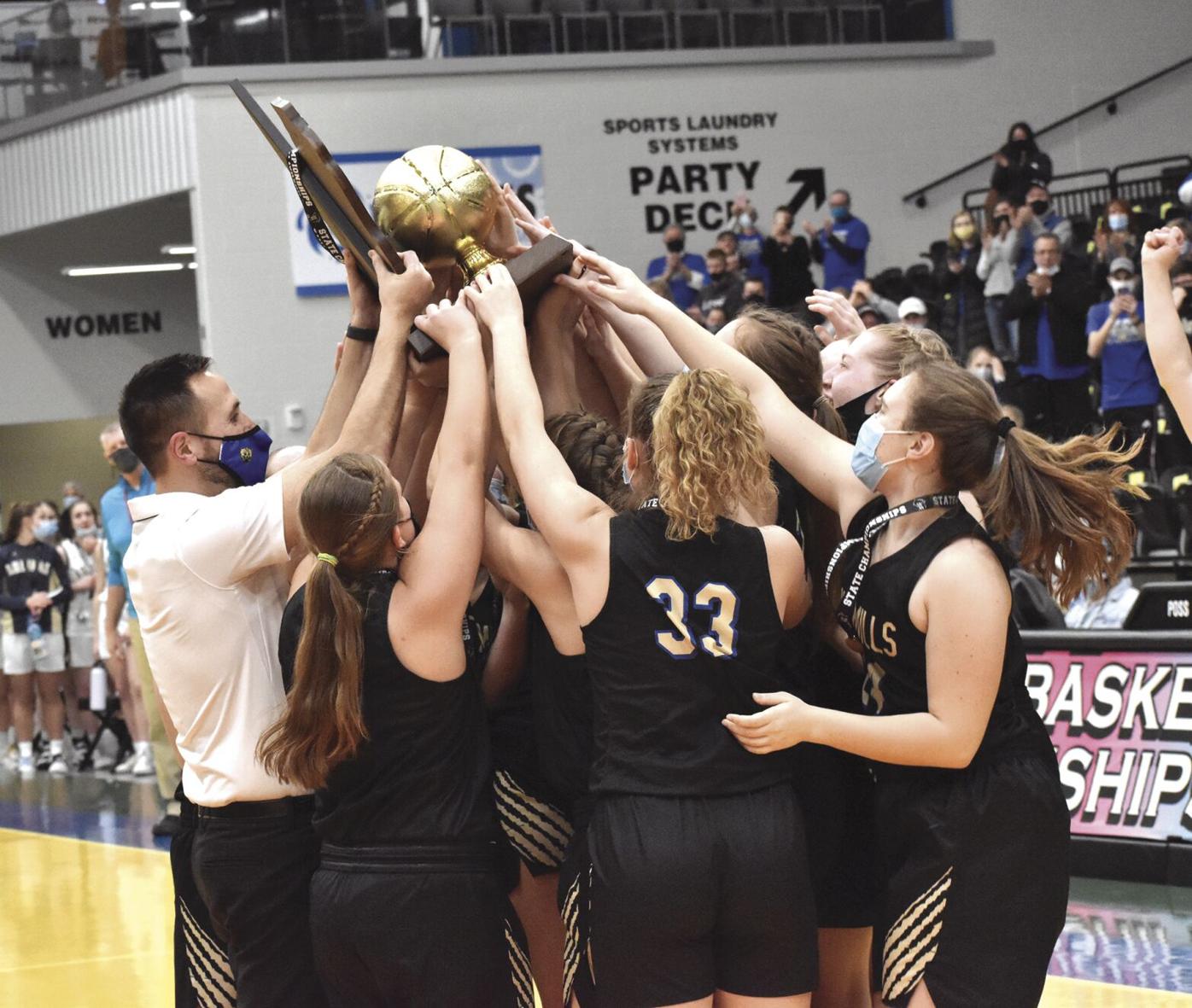 There were hugs all around moments before the Lake Mills girls basketball team clinched the WIAA Division 3 state championship against Aquinas at Menominee Nation Arena in Oshkosh on Friday. The L-Cats won 78-67.

OSHKOSH — The crown jewel of high school sports is on its way to Lake Mills.

It took ending an 87-game win streak to claim the illustrious gold ball.

"Pretty good, pretty good," Guerrero said of how it felt to win a state title. "It doesn’t feel real yet, to be honest."

Aquinas hadn't lost to an in-state foe since the 2017 Division 4 state title game to Howards Grove. The Blugolds, who won D4 titles in 2018 and 2019, had a 37-game win streak overall snapped.

The fourth-ranked L-Cats avenged a 15-point road loss to top-ranked Aquinas from Dec. 28.

"Our team was very fired up because we felt Aquinas felt like they were going to win it easy," Guerrero said. "We wanted to fight it out hard."

"It definitely was motivation," senior point guard Julianna Wagner added. "Playing them earlier in the season and losing we definitely wanted revenge. We were all fired up to play. It really got us excited and ready."

The L-Cats jumped ahead 38-23 at the halftime break, never leading by fewer than nine points in the second half en route to the program's first state crown.

"It’s surreal, I really don’t know what to say," Lake Mills girls basketball coach Brandon Siska said. "Four years of hard work with these girls. Just to watch like I said (earlier on Friday) the improvement every year has been neat and cool to see. We knew even last year that we had a chance of doing this and came up a little bit short.

"The score in the first game (against Aquinas) wasn’t indicative of how it went. It was a better game than what the score shows. We prepped for Aquinas the whole week. Thought we were well prepared. Kids were amazing tonight.

"Picked a great night to put it all together. So proud of these girls and the hard work they’ve put in. It was really fun to watch them play tonight."

"Their bigs were really hard for us to handle," Aquinas girls basketball coach Dave Donarski said. "I feel like they could get interior touches and they didn’t miss anything inside. And they certainly didn’t miss any free throws when we did foul them. Hats off to them. I mean, they’re a great program."

Lake Mills' first-half offense was crisp, efficient, free-flowing and included 5-for-10 shooting from 3-point range. The team shot 62 percent (26-for-42) for the game.

"We knew they were going to pressure us," Wagner said. "We had to stay calm and find the open person. Once they trapped, they left somebody open so we kept moving the ball and got easy buckets."

The L-Cats beat the Blugolds' in-your-face pressure with Guerrero scoring and distributing, sharing the rock consistently.

"The way they pressure, run after the ball and try to trap, we slid Viv to the middle and she did a good job of hitting it at the high post and finding the open person," Siska said. "We made them scramble quite a bit. As we tell them, punish teams that pressure us. We did an awesome job of that tonight.

"We're a very unselfish team if you’ve been watching us play the last four years. Did a great job sharing the basketball. We do that a lot in practice. We had some possessions we highlighted coming in that was like ‘this is how we have to move it tonight.’ Made it sing as we like to say. We did a great job moving the basketball."

Lake Mills, which finished with a 35-17 advantage on the glass, showed off its inside supremacy early, scoring three times in the paint and limiting the Blugolds (22-1) to one look.

Lamke then hit one of her game-leading four 3-pointers from the wing to cut it to 10-9 with 12 minutes, 18 seconds remaining.

Aquinas sophomore point guard Macy Donarski, who scored a game-high 24 points, had eight early points after a floater off glass and layup.

Guerrero followed scoring on a putback and taking it hard to the rack. The L-Cats snatched the lead back with a nice ball reversal, leading to a 3-pointer by Roughen midway through the half, assisted by senior guard Ava Wollin, to make it 16-15. Lake Mills stayed in front from there.

"The pressure, they came up and trapped. We needed to see the court and find the open person," Wagner said of what the team gained from the previous matchup. "When they came up to trap they brought another person up so the corners were wide open. We focused on that and then defensively we focused on shutting down Donarski and (Jacy) Weisbrod. That helped us a lot."

Roughen's 3 kickstarted an 8-0 surge, one that included a layin by Wollin and finished with a Lamke 3-pointer, pushing the lead to 22-15.

Weisbord, who contributed 22 points, hit a 3 out of a timeout to help stem the tide.

"We were much better defensively than in the first meeting," Siska said. "Emphasized running them off the 3-point line and forcing the weak hand, we did a great job of that tonight. Hannah Lamke was outstanding guarding Donarski, obviously a very good point guard.

"The first time around Julianna wasn’t fully healthy either. With a team that pressures like they do it helps to have your point guard fully healthy. It was her second game back with limited minutes. She was nowhere near being back to herself. That made a huge difference. We made a few adjustments tonight during the game the girls did a great job with."

A minute or so later, Roughen buried a long ball, the assist credited to Wagner, who scored on a running layin on the next trip to make it an eight-point affair.

After a pair of turnovers, the L-Cats scored on their last five possessions of the first. Guerrero finished on a slip, Wagner scored on an inbounds, also hitting a corner 3-pointer, and Will had a pair of baskets, each on feeds by Guerrero.

"We knew we had an advantage inside," Siska said. "Worked all week on how they were blitzing and rotating over to take away the roller on the ball screen. It was just a matter of not even setting the screens, hitting the slips quick and then finding the open person.

"Talked to Viv and Kayla and said go dominate tonight. Felt they went out and did that. Kayla played really really tough tonight. It was fun to watch those two. With the way Viv’s been playing lately, she’s been outstanding."

Guerrero had seven of her 13 rebounds in the first. Will secured 11 boards, including five on the offensive end.

It initially appeared to be 38-24 at halftime. Moments before the second stanza got underway, a scoring error was announced that subtracted a point from Aquinas' total. L-Cat nation saw no reason to press for more details, continuing to urge on their team in a rugged closing half.

Lamke used a ball fake to free space for a corner 3-pointer to open the second. Roughen then scored over length on the interior, pushing the team's streak of possessions with a score to seven and the lead at 19.

"As far as finishing inside this was the best game we’ve had going up strong," Siska said. "We went up really strong. As far as shooting the 3, Hannah Lamke’s 3-point percentage was a little down this year, but she’s a great 3-point shooter. She knocked some down tonight. With Taylor and Julianna and all the kids we have that can shoot the ball, it really spreads defenses out.

"I don’t know if I’d say it was the best outside shooting night (of the season) because we’ve had 12 and 13 3-point nights in the past. Sharing the basketball was the big thing and going up strong in the paint."

A second-chance score by Guerrero preceded eight straight from Aquinas. Lamke then made her final 3, yes this one was also from the corner, to make it 48-33.

The Blugolds, who entered the game having won 129 of their last 132 contests overall, scored the next five before a pair of layins by Will. Pitta then got a steal and used an effective ball fake to evade a would-be defender, making it 54-38 with 12:16 left.

The lead swelled to 20 after Wollin went 2-for-3 at the stripe. Roughen was actually the shooter fouled on a 3 by Aquinas junior guard Fionna O'Flaherty but fell awkwardly before slowing getting to her feet and exiting. Roughen returned a minute later.

From there, the L-Cats went 13-of-22 at the free throw line to seal the deal and the gold ball.

"It's crazy, still trying to soak it in," said Wagner, who scored 1,071 career points, the most in program history. "It still feels like a dream right now."

Lake Mills' 10-player senior class, one that eclipsed more milestones and broke more records than you can name, went 49-5 the past two seasons. The group won 70 career games, including their final one.

"All four years with those girls has been amazing," Guerrero acknowledged. "We’ve really become just like family. I couldn’t imagine doing my high school career with anyone else. The bond is just so strong. We know where we’re going to be on the court and pick each other up. We never turn on each other and are always positive out there. It’s just a really good support system and feels like a family out there."