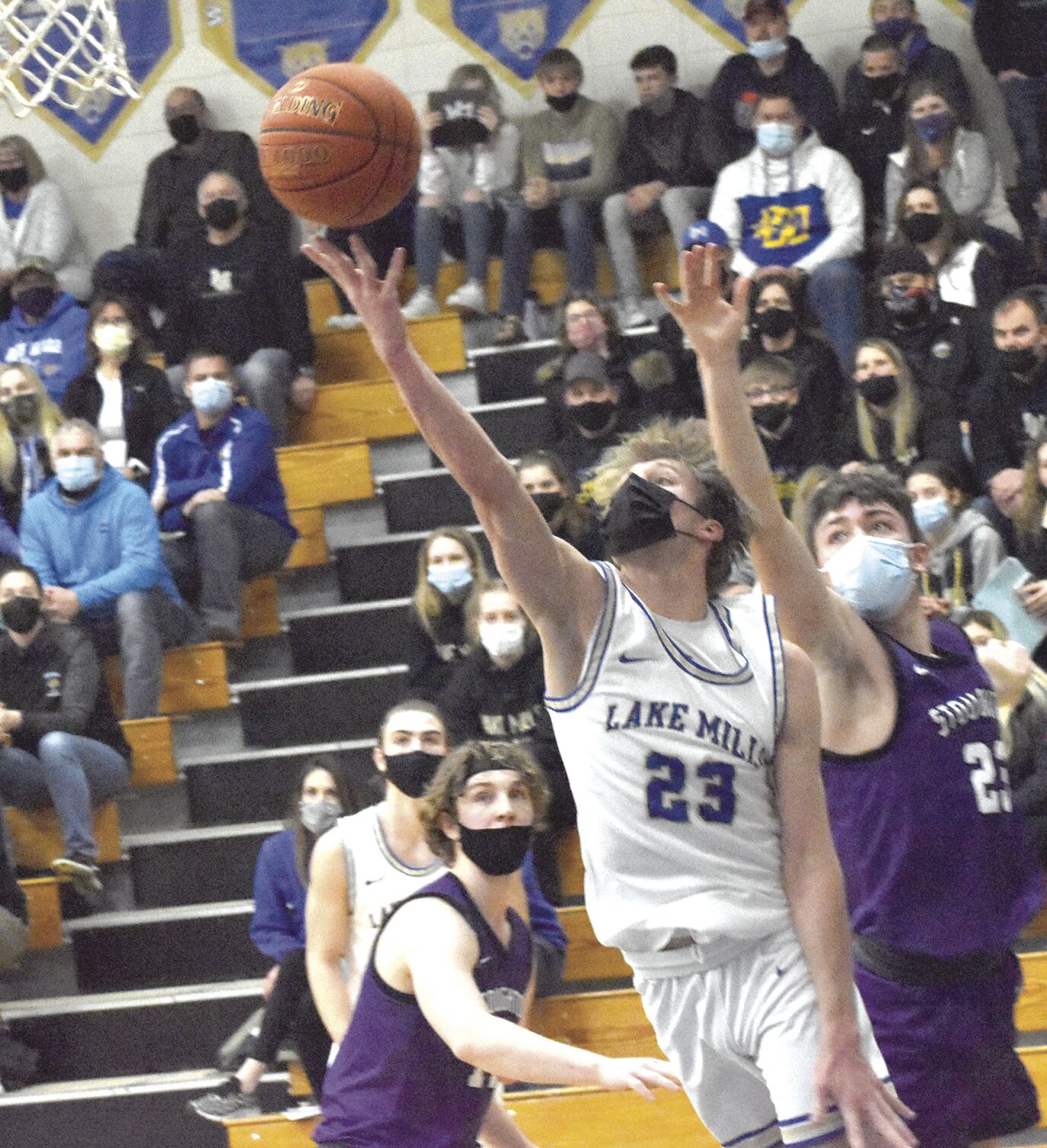 Lake Mills senior forward Charlie Bender scores inside during the second half of the team's WIAA Division 2 regional final against Stoughton at LMHS on Saturday. The L-Cats won 72-52 and Bender scored a game-best 25 points. 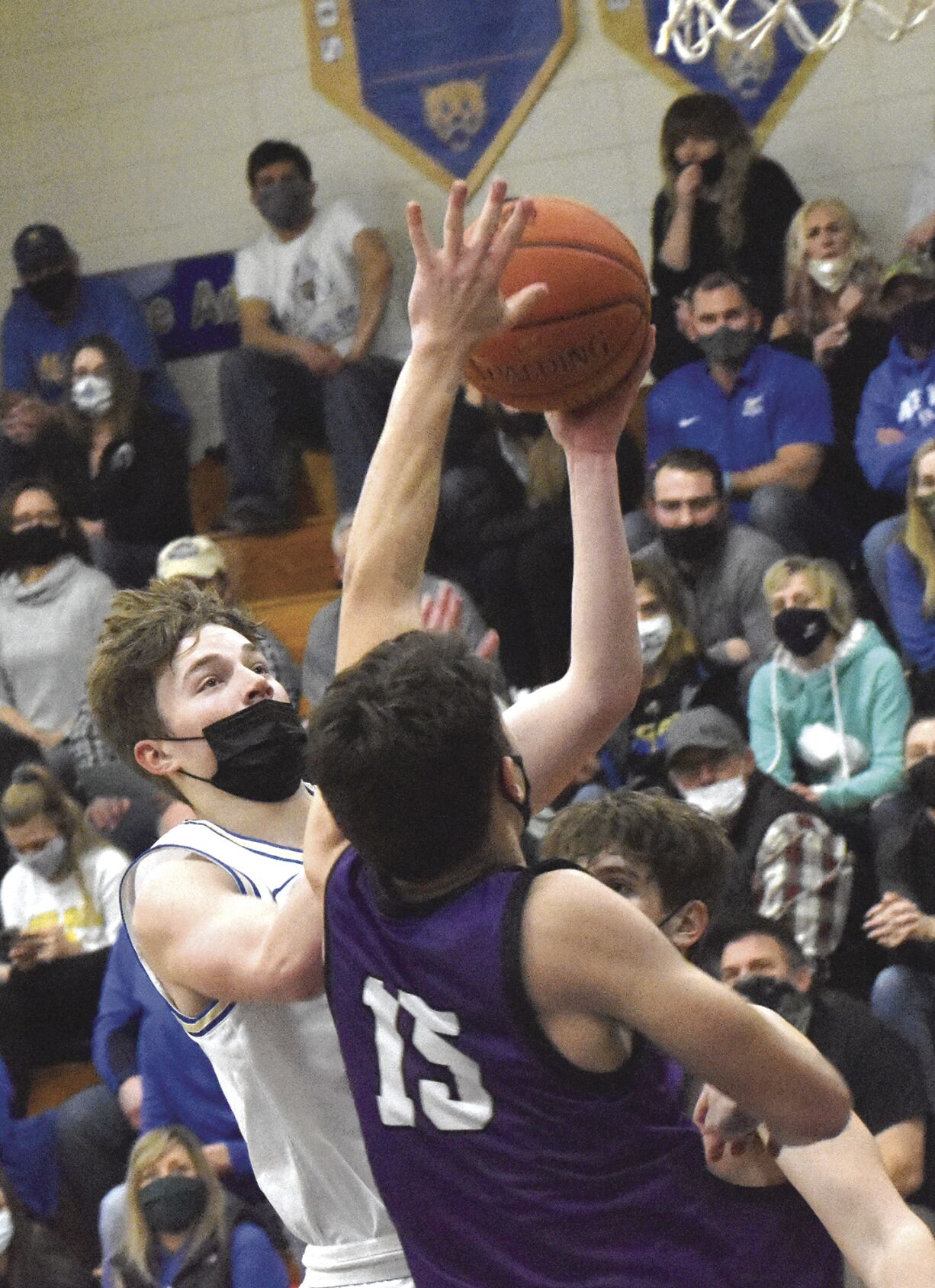 Lake Mills senior guard Drew Stoddard shoots inside with Stoughton junior wing Luke Fernholz defending during the second half of a WIAA Division 2 regional final at LMHS on Saturday. The L-Cats won 72-52 and Stoddard scored 24 points. 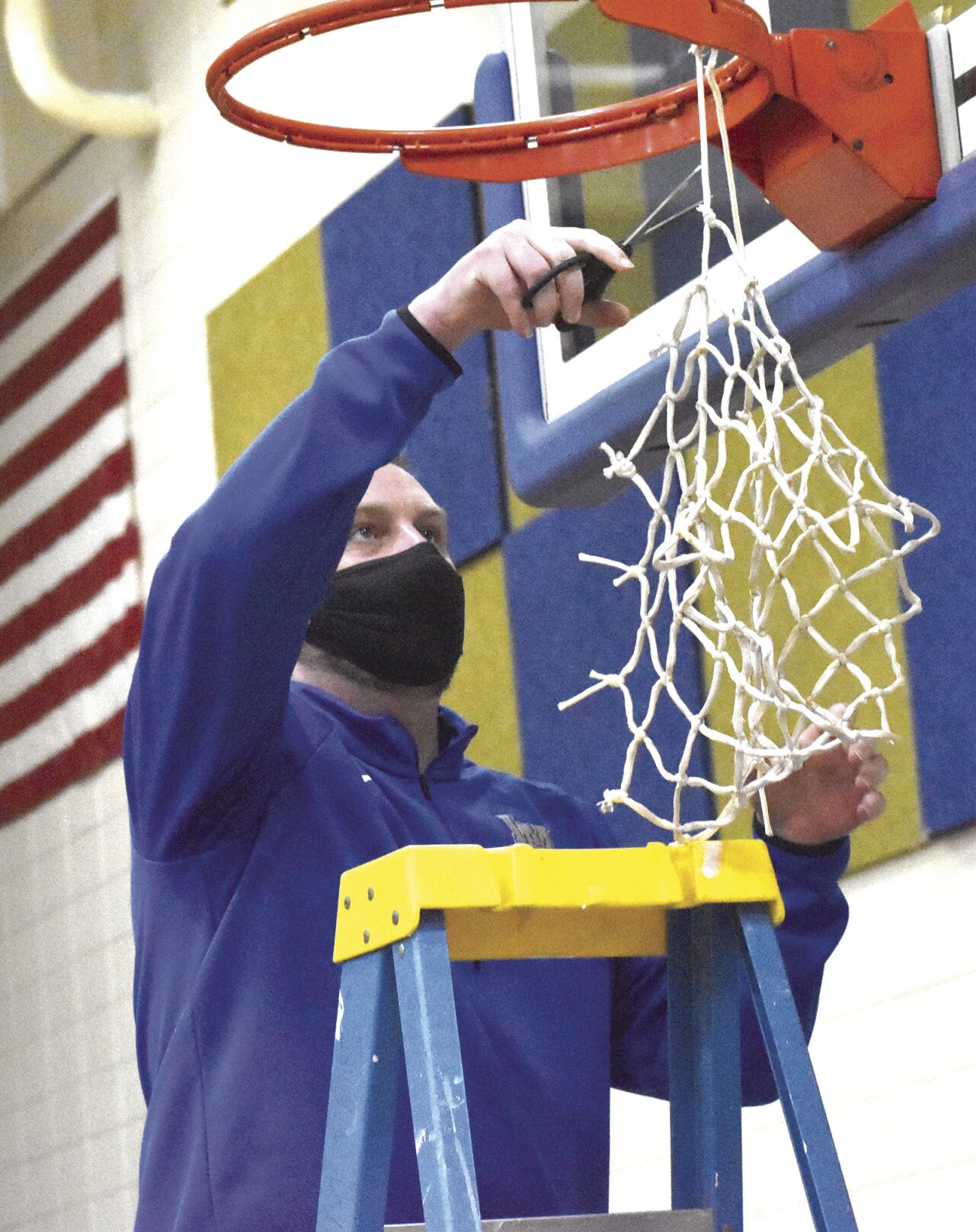 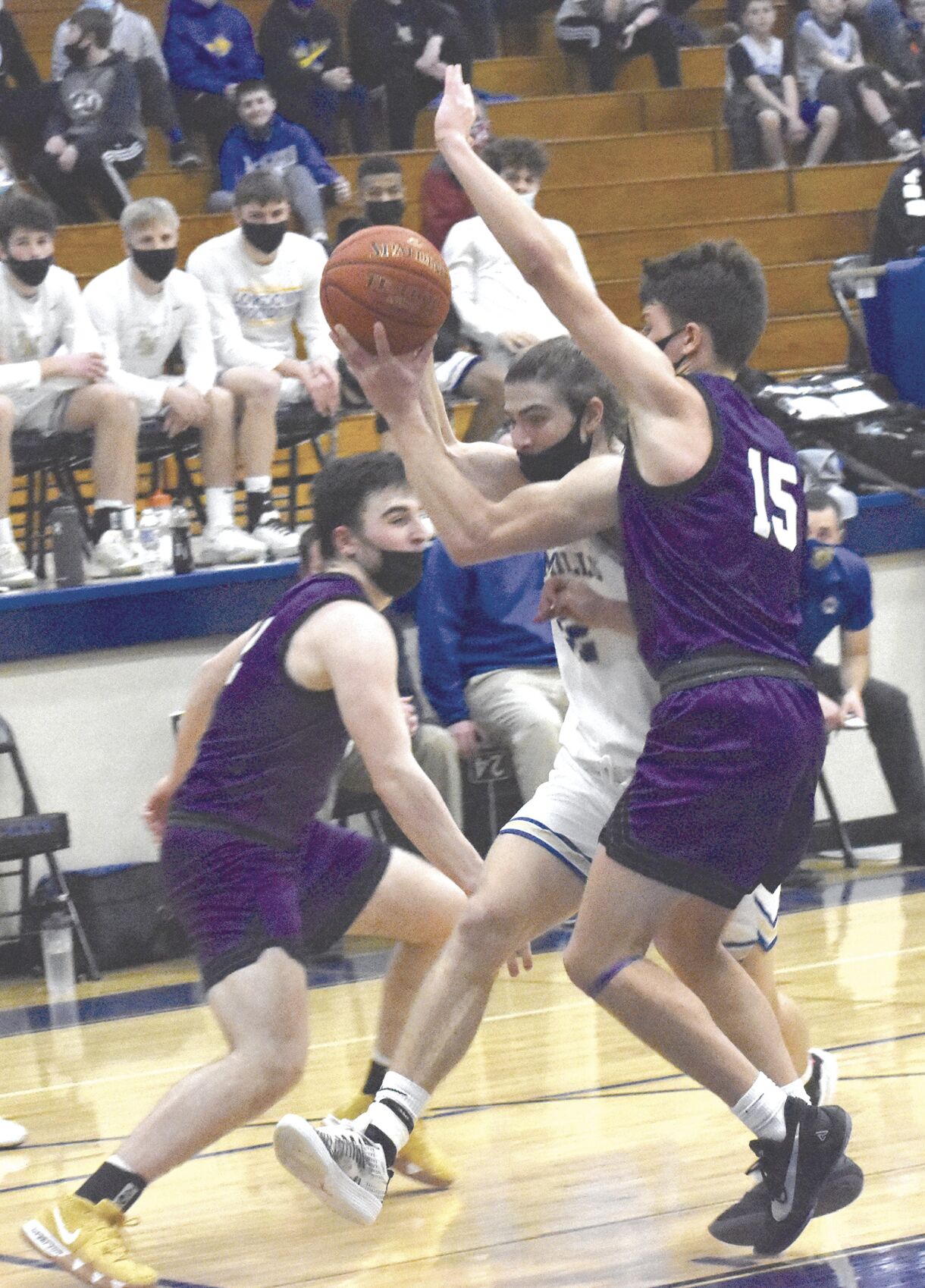 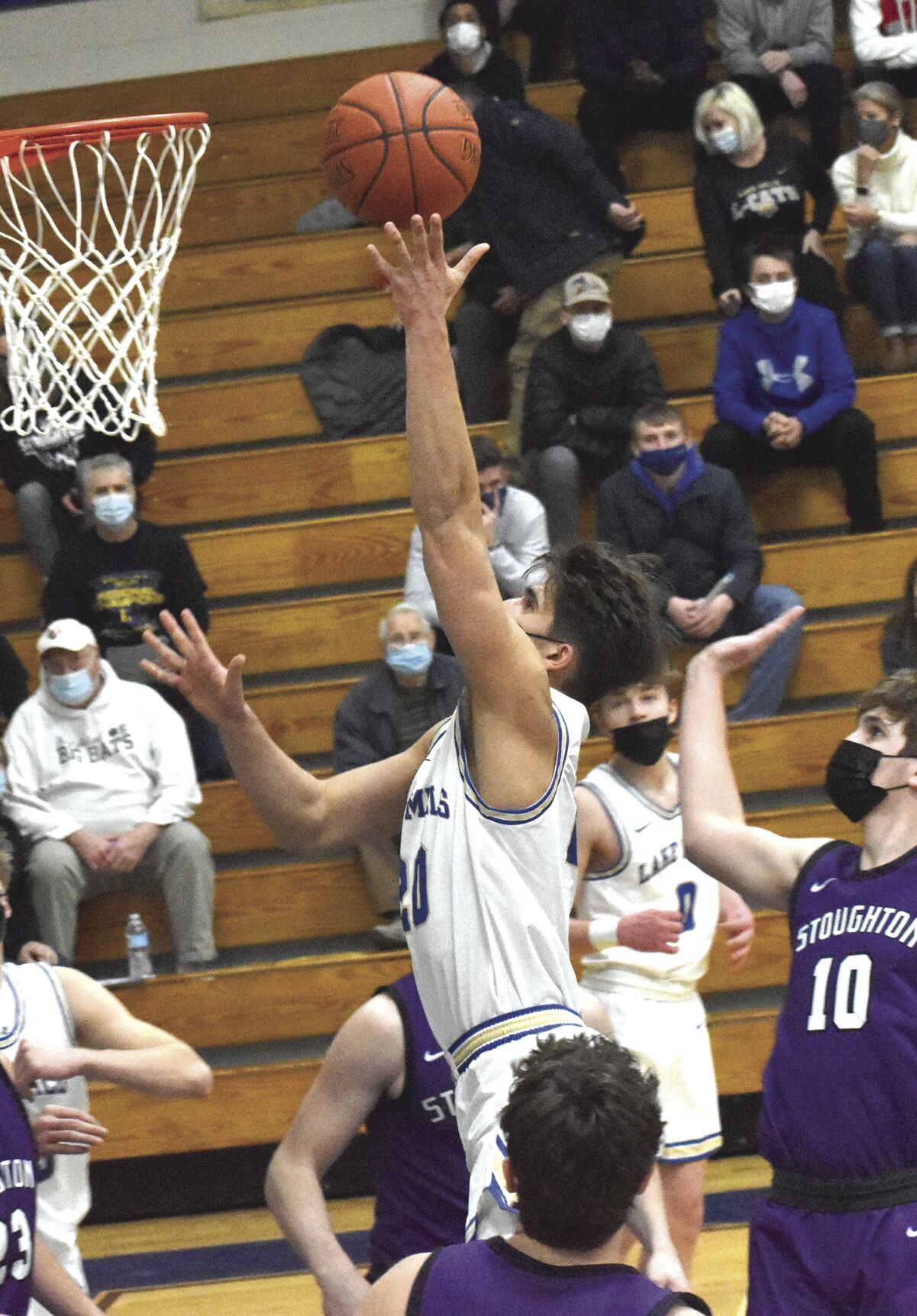 Lake Mills senior forward Jaxson Retrum scores in the paint during the first half of Saturday's WIAA Division 2 regional final against Stoughton at LMHS. The L-Cats won 72-52.

The Lake Mills boys basketball team beat Stoughton, 72-52, on Saturday at LMHS to win a WIAA Division 2 regional championship. The L-Cats host Wisconsin Dells in the sectional semifinals on Thursday at 7 p.m.

Lake Mills senior forward Charlie Bender scores inside during the second half of the team's WIAA Division 2 regional final against Stoughton at LMHS on Saturday. The L-Cats won 72-52 and Bender scored a game-best 25 points.

Lake Mills senior guard Drew Stoddard shoots inside with Stoughton junior wing Luke Fernholz defending during the second half of a WIAA Division 2 regional final at LMHS on Saturday. The L-Cats won 72-52 and Stoddard scored 24 points.

Lake Mills senior forward Jaxson Retrum scores in the paint during the first half of Saturday's WIAA Division 2 regional final against Stoughton at LMHS. The L-Cats won 72-52.

The Lake Mills boys basketball team beat Stoughton, 72-52, on Saturday at LMHS to win a WIAA Division 2 regional championship. The L-Cats host Wisconsin Dells in the sectional semifinals on Thursday at 7 p.m.

The L-Cats never trailed, winning their first regional crown since 2017. The team lost in the regional final last season and in the semifinals the two years prior.

"We've been talking about how this is the first one since '17," Bender said. "We've also been talking about how since before '17 it was way back in (1995) when we last won it. It's huge for us. The seniors were trying to explain to the underclassmen that we've been knocked out in this round or before it all three years of high school.

"We lost to Lakeside (Lutheran) my freshman year (in the semis), Lakeside again my sophomore year (in the semis) and went to (Racine) St. Cat's and got buzzsawed (last season in the final). This feels great. It's the farthest in the playoffs I've ever been. We're going to try our best not to be star-struck and come back to practice and get to work."

"We were just trusting each other," Bender said of the first-half offense. "The best thing about our team is that we get the ball to whoever is hot. Sometimes it's who's lucky enough to be on the end of some of our longer possessions when we get two or three ball reversals. We know then we're doing good offense.

"It's not a matter of who goes and creates their own shot. It's a matter of who is on the end of our best ball movement. That happened to be Drew when it came to scoring on the perimeter. Happened to be me getting some ball screens from (Jaxson) Retrum and coming off curl screens and scoring. It's all about movement for us and who is on the end of those really good possessions."

"Focus defensively was on McGee and making sure he sees a wall of defenders when he drives," Lake Mills boys basketball coach Steve Hicklin said. "Knowing the tendencies of the other guys was also important. They had some really good shooters and some guys that wanted to finish at the basket. Understand who you're guarding and getting our right matchups was really a focus.

The L-Cats wasted little time building a lead, pulling ahead 22-15 on Stoddard's third 3-pointer of the half, this one coming of the step back variety.

Bender drew a charge on McGee, who initiated contact and expressed displeasure with his second foul midway through the half.

"Getting McGee on the bench was a big deal," said Bender, who committed to play at UW-Platteville earlier Saturday. "We were really trying to wall off to stop him. We knew Fernholz and those guys could shoot the ball. We also knew they revolved around McGee a lot and he was going to be their driving horse. Walling him up which we did at the beginning was big. Eventually on the baseline there he got that charge and that put him on the bench.

"Hicklin called timeout both times he came off the floor and said 'you know this is when we need to stretch out our lead, where we need to have long possessions and make those guys work up and down.' They are a deep team, but with McGee on the bench it's definitely a better situation for us."

The L-Cats kept the pedal pushed down, grabbing a 31-18 lead on a Stoddard shot from beyond the arc, assisted by Bender, with six minutes left. Bender then had a putback bucket and Foster a 3-pointer to help maintain the margin.

"Charlie was causing a lot of mismatch problems for them," Hicklin said. "If they went small, he was able to score in the post. Drew did a really nice job getting going from the outside too, he hit some key 3s for us to separate a little bit. From there, we took care of the basketball and got shots every time down."

McGee re-entered around the four-minute mark, sending home a two-handed transition slam at the horn to keep the Vikings within touch.

The Vikings connected from 3 on the first trip of the second half and were within 45-41 when McGee hit his only 3-pointer 3:30 in.

Then things went south for the team from the Badger South.

Retrum had a chance for a 3-point play and Bender a basket inside to double the lead. McGee then lowered a shoulder and bulldozed through Bender, drawing his third foul. Some jarring after the call earned McGee a technical, also serving as his fourth personal with 13:25 to go.

Bender missed both technical free throws, but the L-Cats still scored the next seven points to cap an 11-0 spurt. Bender hit a scooping layup and had a transition putback sandwiched around a Stoddard 3-pointer to make it 54-41.

Stoughton had it within 10 before a Bender corner 3 drew a thunderous reply from the home crowd.

"Our first goal was a conference title and that didn't happen," Bender said. "We looked at that last game losing to Lakeside (on Feb. 2) as the game that had to determine the rest of the season. In the locker room after that game, losing a conference title hurt a lot and I think that showed in this game. We wanted to come out and get a plaque since we couldn't get a conference title."

Foster then grabbed an offensive board, finding a Stoddard for a wide open 3-pointer, his sixth of the night, before a Moen score inside made it 68-46 with 3:00 left.

"It's great. It was one of their goals coming into the season was to win a regional championship," Hicklin said. "That's been our focus here the last couple of weeks, trying to be playing as well as we could for a game like this.

"We knew we were going to be playing someone pretty tough. It's not going to get any easier obviously when we go on. The first of their goals is accomplished. They still have a few more out there."

Lake Mills has won six straight and 16 of their last 17.

The L-Cats drew the second seed in their sectional bracket and host third-seeded Wisconsin Dells in the sectional semifinals Thursday at 7 p.m. Top-seeded Monroe hosts fourth-seeded Edgewood in the other semifinal.