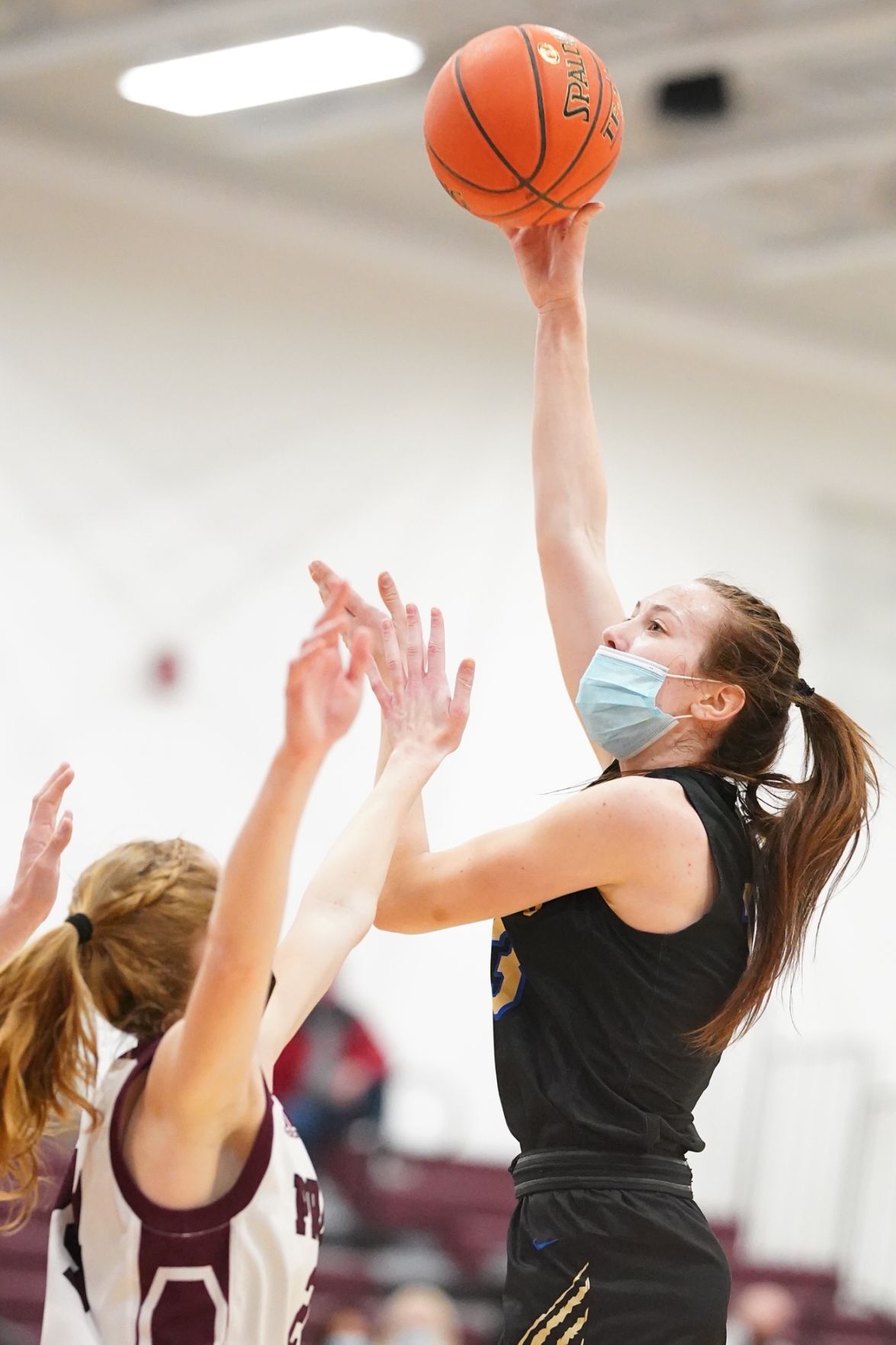 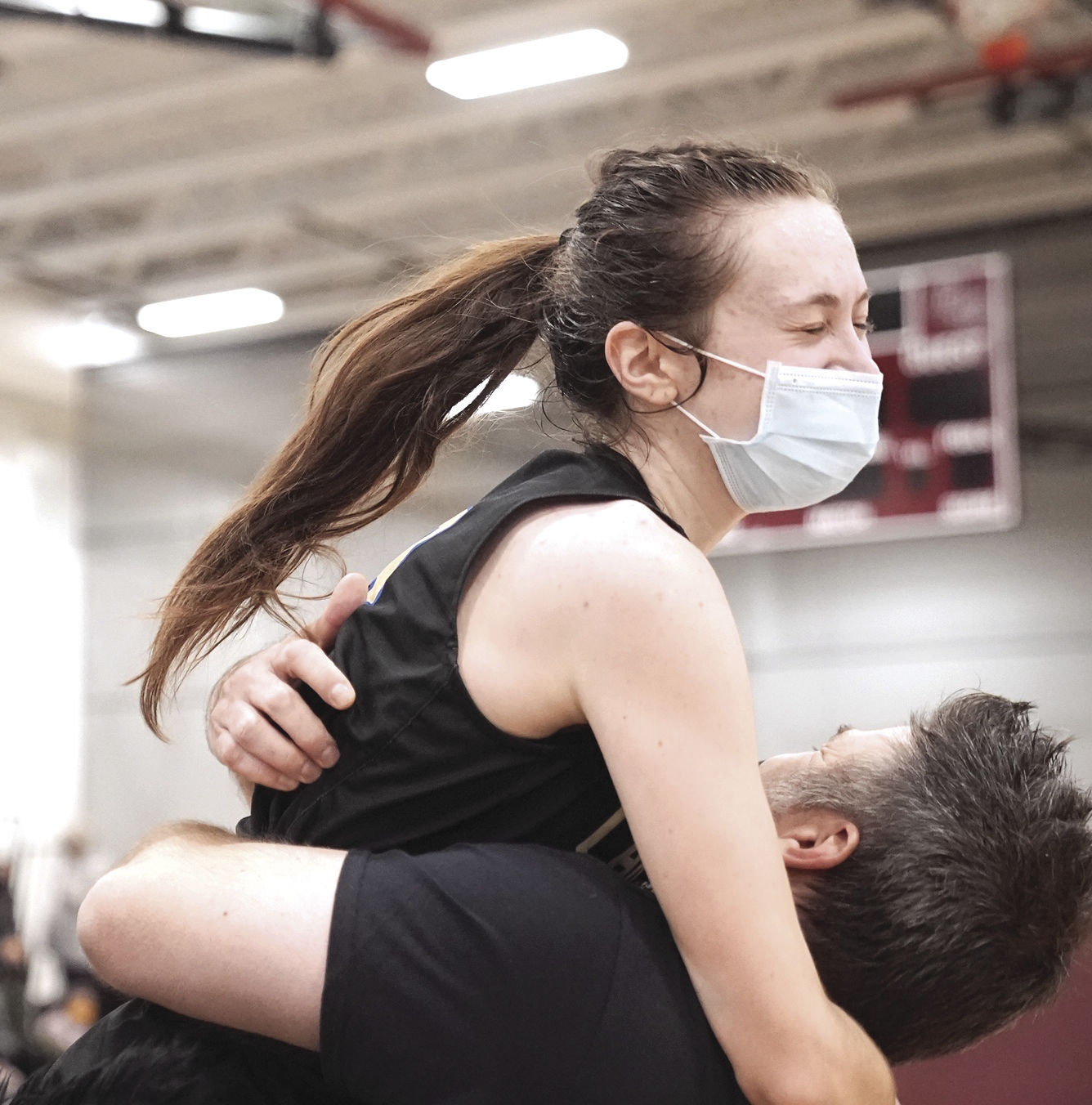 PRAIRIE DU CHIEN — Is it March yet?

Not quite, but that didn’t stop the L-Cats and Blackhawks from playing a down-to-the-wire, back-and-forth elimination game.

“It’s exciting. Last year in the semis we trailed by 12 in the second half,” Lake Mills girls basketball coach Brandon Siska said. “This time we led most of the way and didn’t flinch when things weren’t going well. With all the big games our kids have played in, that’s how they react to tough situations. To go on the road and play a team ranked in top five all year is a huge win.”

The Blackhawks (17-3) took the lead on a bank shot in the paint by junior forward Allison Allbee with 19 seconds remaining. Lake Mills then called timeout and after a series of perimeter passes, Guerrero drove past her defender and scored off glass. Prairie du Chien didn’t get a clean look at the buzzer.

“I took it to the basket the whole game. That was my first instinct,” Guerrero said of the game-winning shot. “When I shot it, I knew I had to make it for the team. Our team has worked so hard to get to this point and we needed it to win. I wanted to do it for them.”

“We had a little dribble hand off on a horns look called,” Siska added. “Wanted to come off a double ball screen but the play didn’t work. There’s a kickback option. Vivian didn’t like the look so she blew by her girl. Bella Pitta made a nice seal off and then Vivian hit a huge shot for us.”

Guerrero scored a game-high 25 points, matching a career-high from two seasons ago and bettering her previous season high by five points.

“When they were running the 2-3 zone, we hit the high post with Vivian and she was doing a a great job sealing inside,” Siska said. “In 1-on-1 situations, we told her she needed to dominate. We felt she was a matchup they couldn’t defend well. She went out and dominated tonight.”

The L-Cats had their biggest lead of the game at 27-14 with 6 minutes, 10 seconds remaining in the first half after a 3-pointer by senior guard Julianna Wagner, who scored all 12 of her points in the first stanza.

Guerrero, who scored 15 first-half points, scored on a putback and Wagner hit another 3-pointer as the L-Cats pulled ahead 35-30 at halftime.

“Prairie du Chien’s height was a big factor,” Guerrero said. “The guards did a good stop hitting me inside. When I got it inside, I knew I had to score. That was our advantage tonight.”

The Blackhawks, led by junior guard Lily Krahn who finished with a team-best 16 points, built up momentum early in the second. PDC opened the half on a 12-7 run, which included two buckets by Krahn and a 3-pointer by sophomore guard Ashlynn Knapp to square things at 42 with 10 minutes left. Krahn’s layin shortly thereafter gave the Blackhawks a two-point edge.

“We were face guarding her in addition to our usual fullcourt press,” Siska said of the gameplan against Krahn, who has six NCAA Division 1 scholarship offers. “Thought we could wear them out. Krahn didn’t get tired even with as much focus as we put on her at times. Couldn’t over help though because her teammates hit shots. They have other kids who can shoot it too. They are very disciplined and are a very tough team to defend.”

Guerrero responded by hitting a pair at the line and knocking down a floater with her off hand from the high post. Senior forward Hannah Lamke drew contact from Krahn and hit both to give Lake Mills a 48-44 edge. Guerrero then scored in the paint on a look from Lamke to maintain the margin.

L-Cat sophomore center Bella Pitta grabbed an offensive rebound, kept the ball high and scored to make it 53-50 with 3:42 left. The Blackhawks, who have lost in the sectional semis three straight seasons, had a transition score and a basket by senior forward Mackenzie Knapp to grab a one-point edge.

Pitta snatched the lead back with a strong take, backing down a defender, with roughly 2:00 to play.

“She had a size mismatch and is good at shooting off two feet with her right or left hand,” Siska said of Bella Pita, who scored nine points. “Tonight she was feeling confident.”

“Thought we came out and played great defensively, especially in the first 12 to 14 minutes of the first half,” Siska said. “We had some shots we didn’t take but got up double figures. Had a chance to put them away, but PDC did a great job of staying in the game.

“When it was going back and forth late in the game, we had some sloppy turnovers. If they hit a shot, we had an answer for it. In the second half, we didn’t string enough stops and scores together to pull away.

“In the last four minutes we had unforced turnovers, we have to be stronger with the ball. We made stops, got rebounds and hit shots to pull it out. Proud of the way they kept fighting and found a way to win.”

The L-Cats face top-seeded Marshall in the sectional final on Saturday at Cambridge High School at 3 p.m.

"We know that the first meeting could of gone either way," Guerrero said. "We will play our hearts out (on Saturday)."