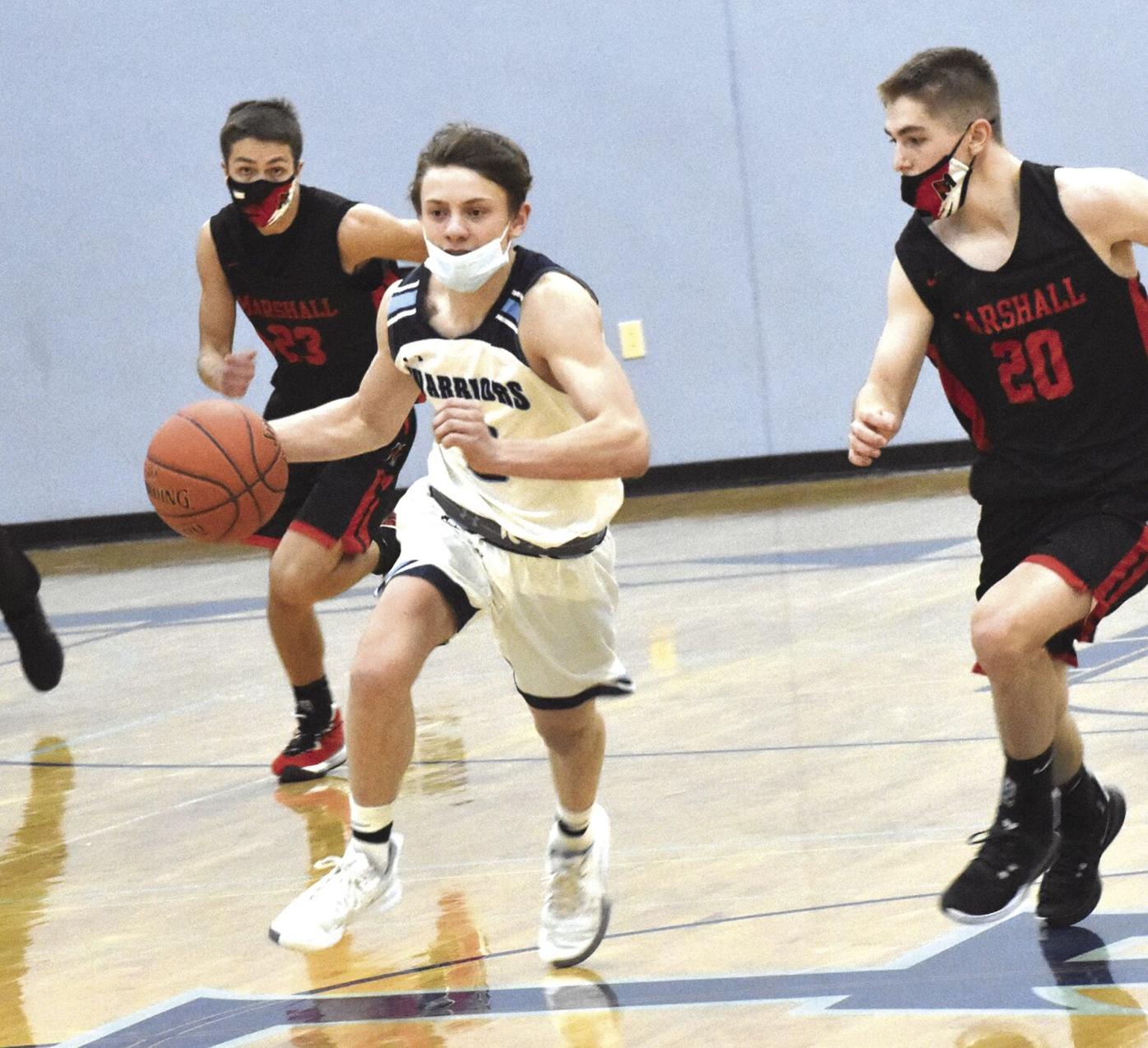 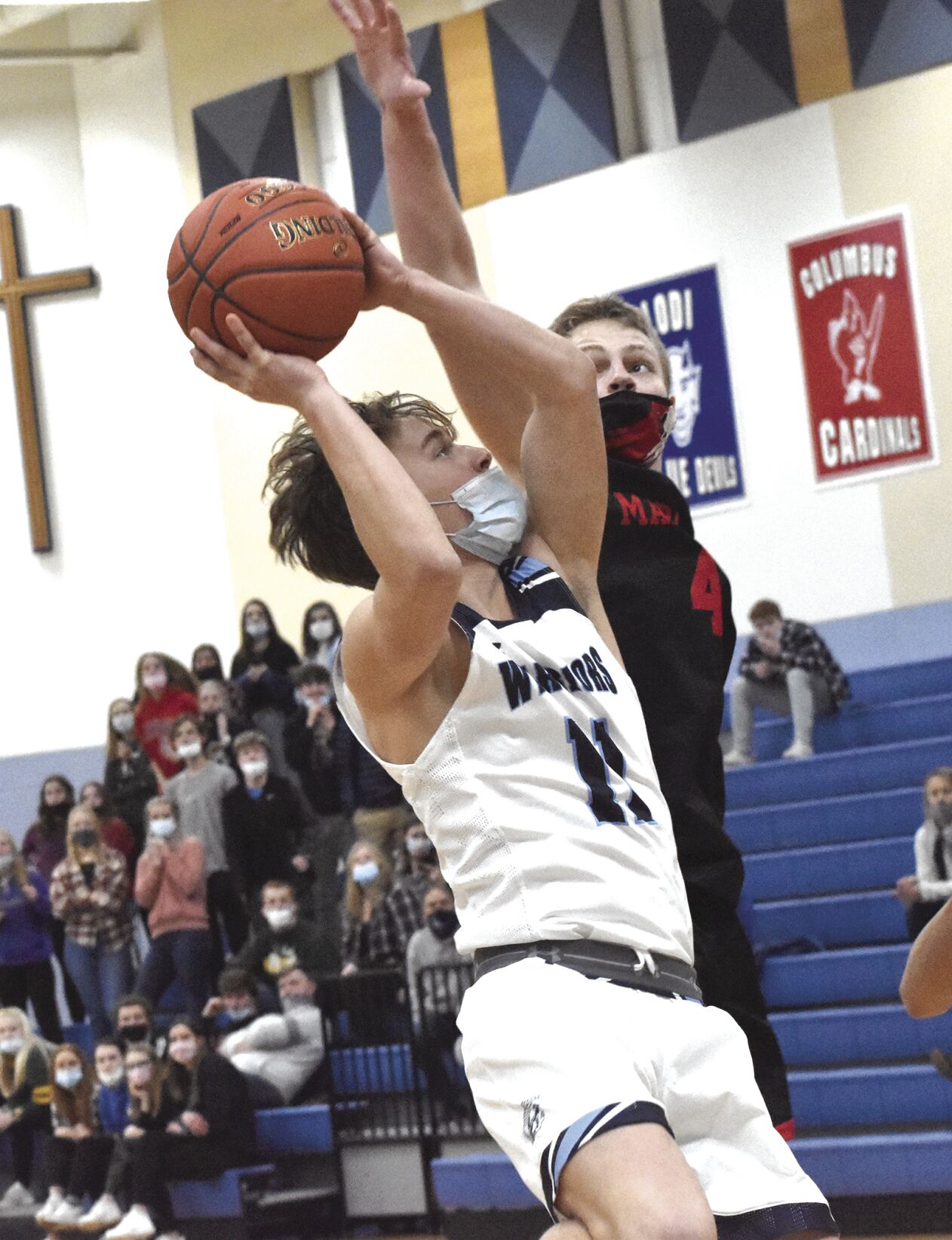 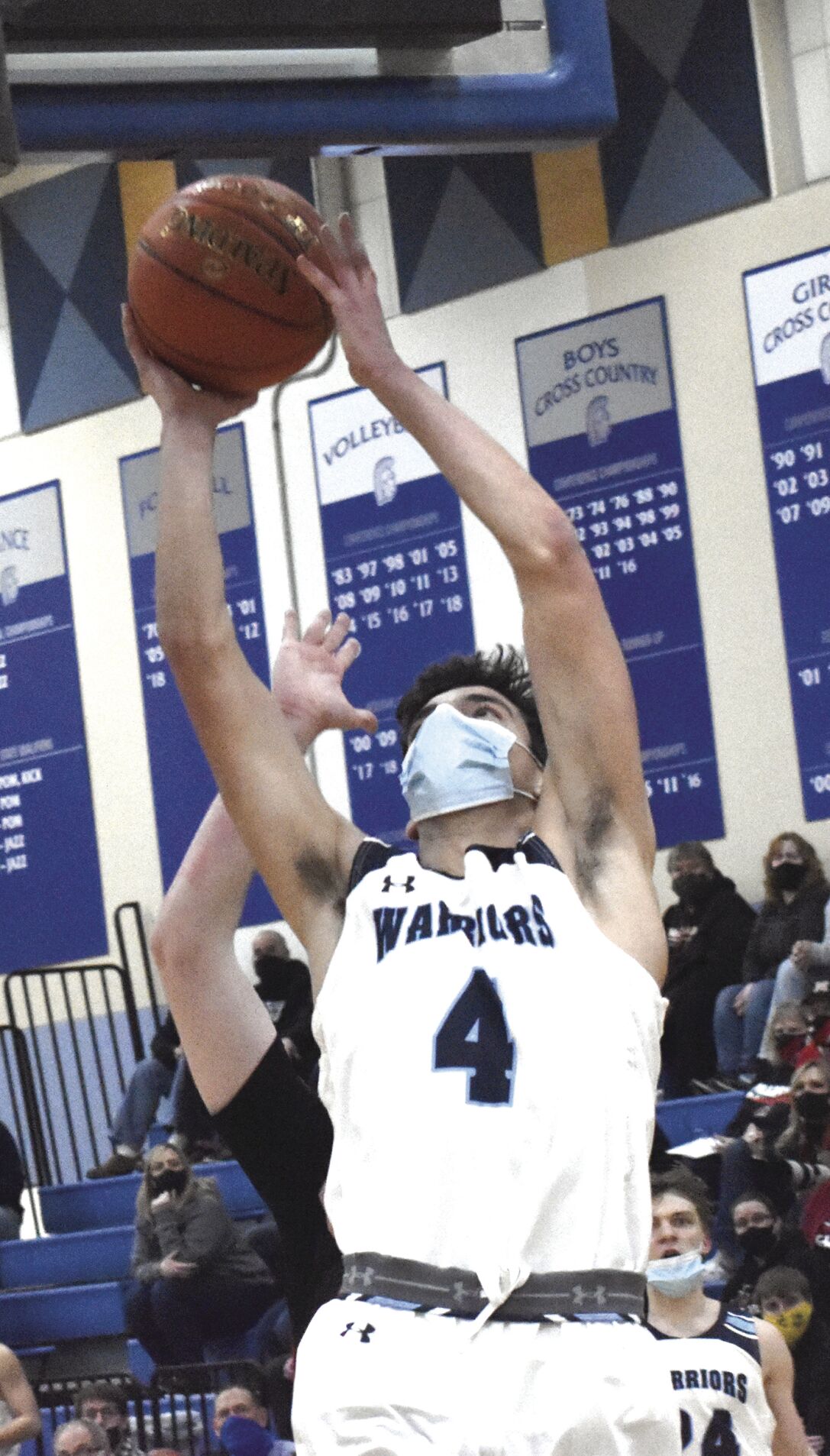 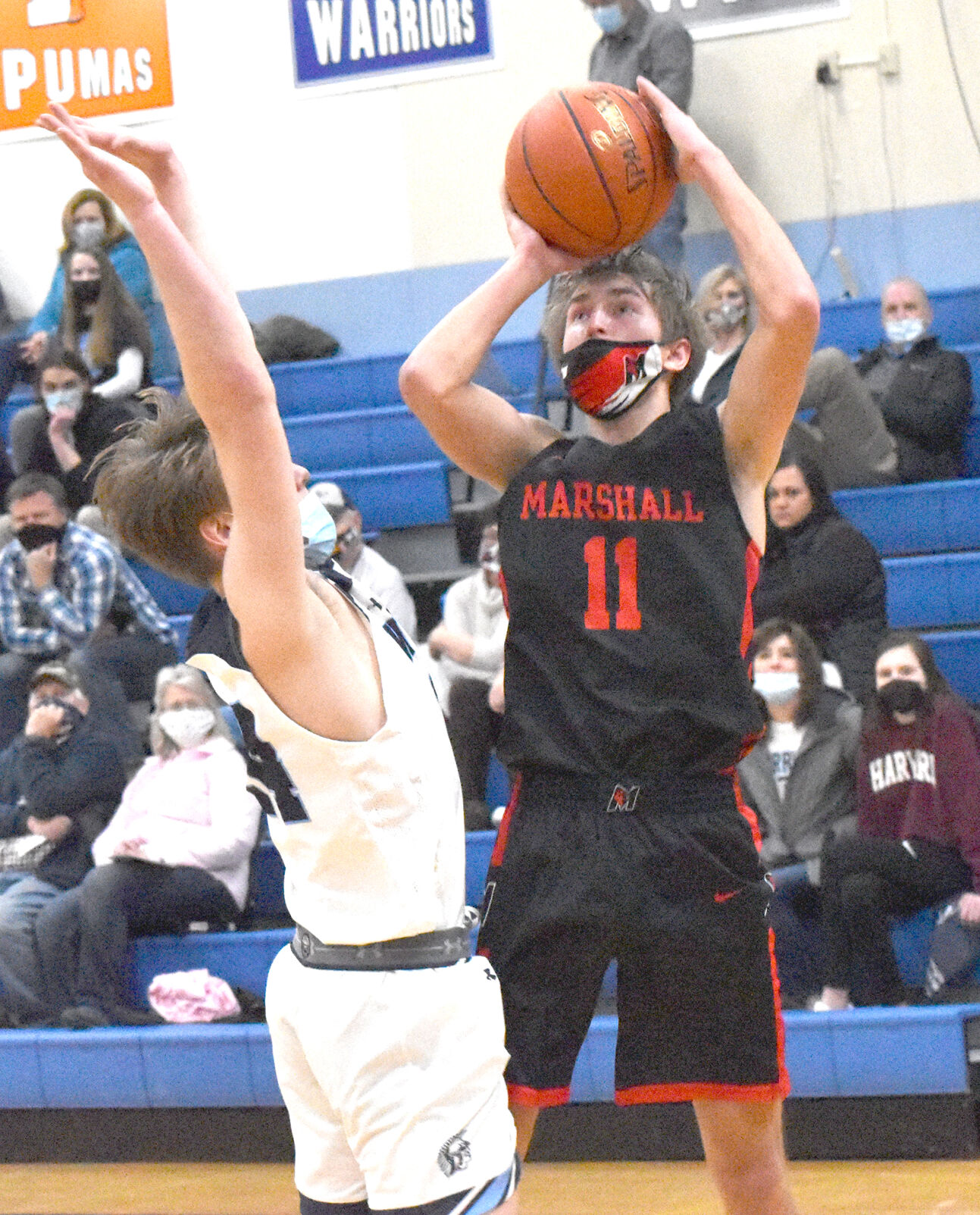 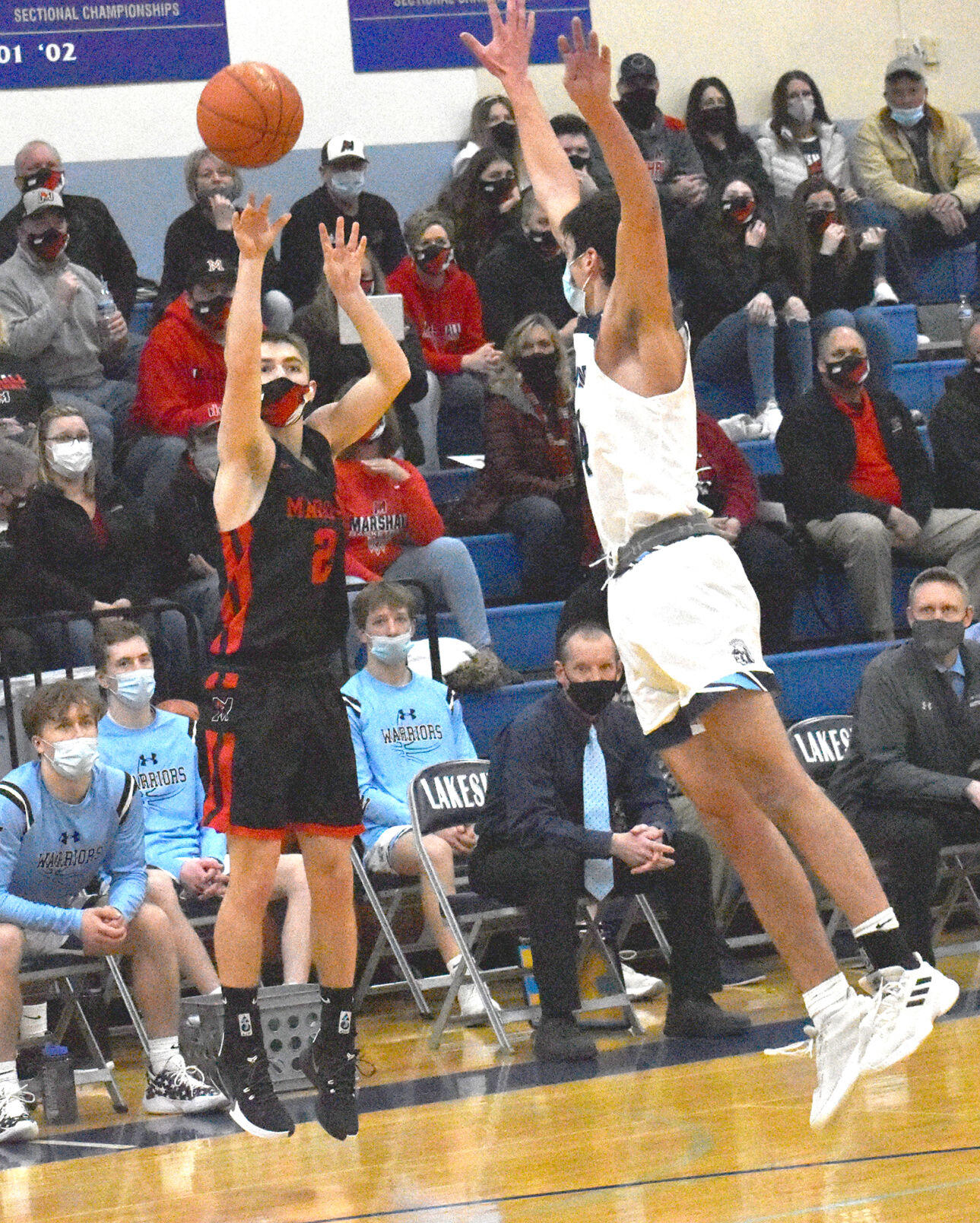 LAKE MILLS — Count out a Marshall boys basketball team that has been through a season unlike any other at your own peril.

The second-seeded Lakeside Lutheran boys basketball saw its 23-point lead shrink to one but hung on for a 58-54 victory over third-seeded Marshall in a WIAA Division 3 regional semifinal at LLHS on Friday.

"Our halfcourt defensive pressure has been phenomenal since early January," Lakeside Lutheran boys basketball coach Todd Jahns said. "In all of our wins, that's what carries us. Even tonight, we got to the 50's, but we said it was going to be a game in the 40's and it really was for the most part. Our guys take pride and buy into that. They love it."

Warrior sophomore guard Levi Birkholz scored 16 of his game-best 23 points in the second stanza in the team's wire-to-wire victory, which pushed the team's win streak to 10 and record to 19-4.

Marshall, which hasn't played or had a full-contact practice at home this season, was down 43-20 with roughly eight minutes left after an acrobatic score in the paint by Lakeside sophomore forward Trey Lauber.

From there, the Cardinals went on a 32-10 spurt over seven minutes. Junior guard Craig Ward, whose team-high 19 points included 15 after halftime, hit a deep 3-pointer to make it 53-52 with 1 minute, 4 seconds left.

Lakeside senior forward John O'Donnell split a pair at the line, giving Ward an opportunity to give the Cardinals their first lead. Ward's look from beyond the arc was off the mark and the Cardinals fouled senior guard Gabe Uttech, who went 1-for-2 to make it 55-52 with 40.1 seconds left. Junior forward Michael Lutz had a 3 rattle around before falling out on the ensuing trip. After Vater grabbed the deflected rebound that caromed his direction, Birkholz pushed it downcourt and found senior forward Seth Veers, who was fouled and went 2-for-2 to make it a five-point game.

Ward was fouled driving to the hoop with 14.5 seconds left, hitting both, before Birkholz went 1-of-2 with six seconds remaining for the final margin.

"Have to keep poise and composure. Have to get a rebound and a flip here one time. We got the stop, rebound and score. Suddenly were in control and the pressure is back on them. Our kids kept fighting down and saying 'here's where we're at, let's make a play and get it together.' Marshall was saying the same thing which was the beauty of it."

The Cardinals rallied on the strength of Cole Denniston's 3-point shooting. The junior guard hit on consecutive trips when Lakeside's lead was at its peak. Denniston hit again with 3:45 left to make it a 48-38.

"Super proud of our kids with the fight they showed," Marshall boys basketball coach Dan Denniston said. "They could have easily rolled over and said our season is done. We fought and that says a lot about the kids on the floor. Very proud of them and honored to be their coach."

Denniston's fourth and final second-half 3 made it a five-point affair. Ward then cashed in on a steal in the backcourt, making it a one-score game for the first time since midway through the first half.

Ward picked Birkholz's pocket in the frontcourt, finishing off glass at the other end to make it 52-49. Veers split a pair before Ward connected with 1:04 left.

"Defensively it was the concept that they have two scorers in Ward and (Reid) Truschinski," Jahns said. "We put Ian (Olszewski) on Ward and John (O'Donnell) matched up well with Truschinski. We stuck with Denniston and told the other two defenders not to give up dribbling lanes and pack the lane. John and Ian had no help responsibilities.

"We didn't give them a clean shot for a while and went 10 deep into the bench. They were sitting at 20 points for a while in the second half and couldn't get anything but a deep contested 3. Then Denniston hit a couple shots and momentum changed. We missed some free throws and they made a run at us."

Veers added nine points and Uttech had six for Lakeside, which last lost its playoff opener in 2012 and is ranked ninth in the final D3 Associated Press poll.

The Warriors held Truschinski to 10 points after he scored 19 in the prior meeting, a 55-52 Marshall victory on Dec. 11.

"John played a great game inside manning their buy guy," Jahns said. "With his able to screen and rebound, he was a force tonight. If he consistently does that we are much much better."

Lakeside pulled ahead with an 11-0 spurt that encapsulated halftime, a push Birkholz put the exclamation on with a one-handed transition slam off a steal that made it 26-14 early in the second.

"They are extremely sound defensively," Denniston said. "They are physical and their aggressive. This is the best defensive team we have played against all year. They are physically stronger than we are. Their guys outweigh us on average by 20 pounds a guy.

"We need to do a better job against teams like that of cutting and screening harder to go past them instead of moving the ball with a pass."

Birkholz scored the team's next five points, including a 3-point play with the off hand, and Uttech hit a 3-pointer on a skip look from Veers, upping the edge to 14. Four points by Birkholz and five by Lauber made it 43-20.

Marshall, the Capitol South co-champion with New Glarus, finishes the season 16-8. The team played 24 games, all on the road or at neutral sites, and practiced twice a week away from home due to Dane County public health regulations.

"We talked about that in the locker room after the game," Denniston explained. "We played 24 games this year, tied for a conference championship and beat some really good teams. Not one game did we get to play on our homecourt. We never used that as an excuse. I will say, it makes a difference when you get to play at home. Just the time on the bus mentally it wears you down.

"I'm proud of our kids for that. We never used it as an excuse. I pray to God we can get back to a normal life soon and that next basketball season these kids will get an opportunity to play in front of their home fans and home community. Then we can show our community what kind of kids we have and what time of team we have.

"We have a great group of juniors. We are going to miss Kelby Petersen. Proud of him, how much he's matured this season and how great of a teammate he was. Looking forward to next season too for one more shot with these juniors."

Denniston scored 14 of his 17 in the second frame and Truschinski added 10.