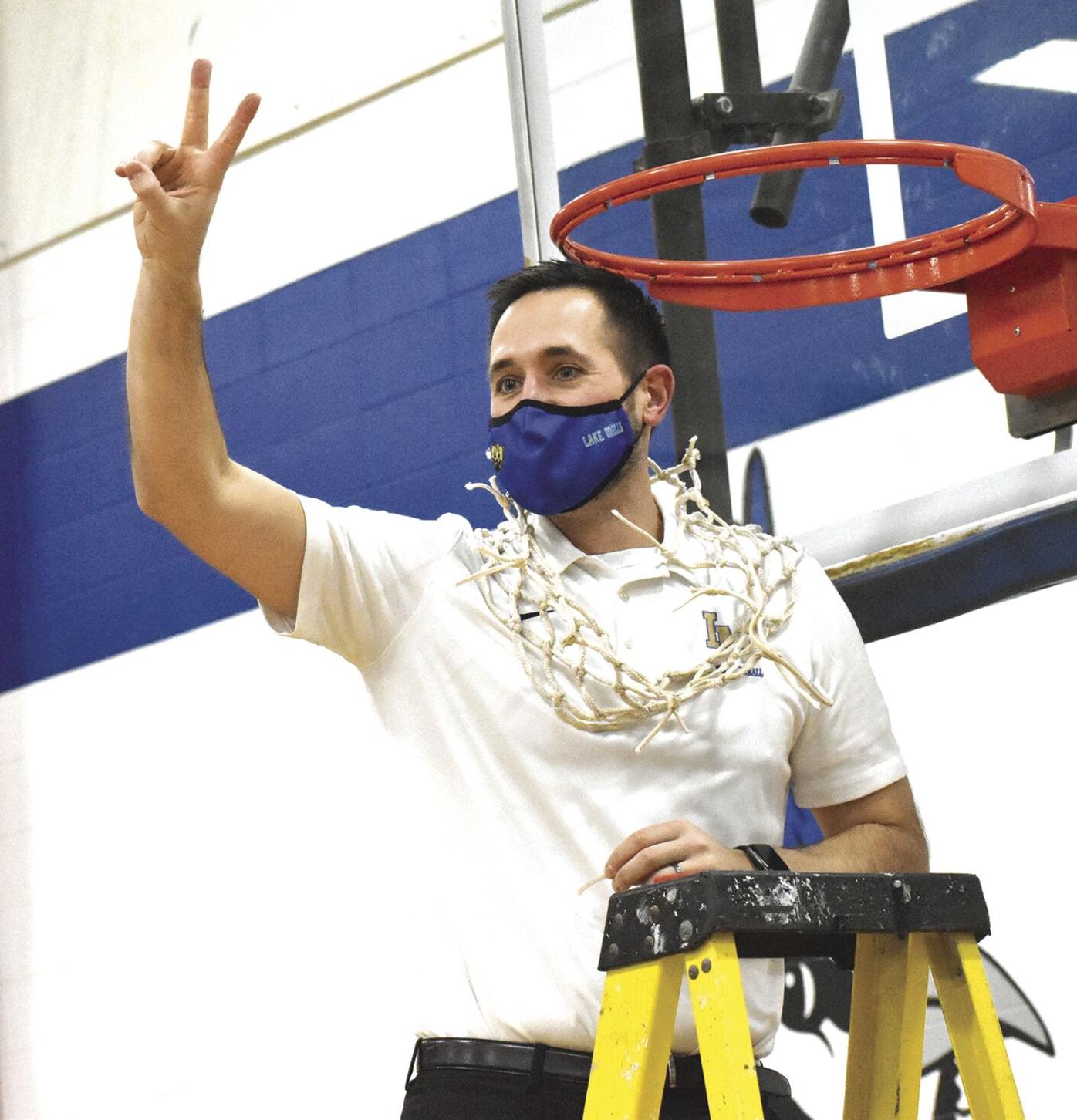 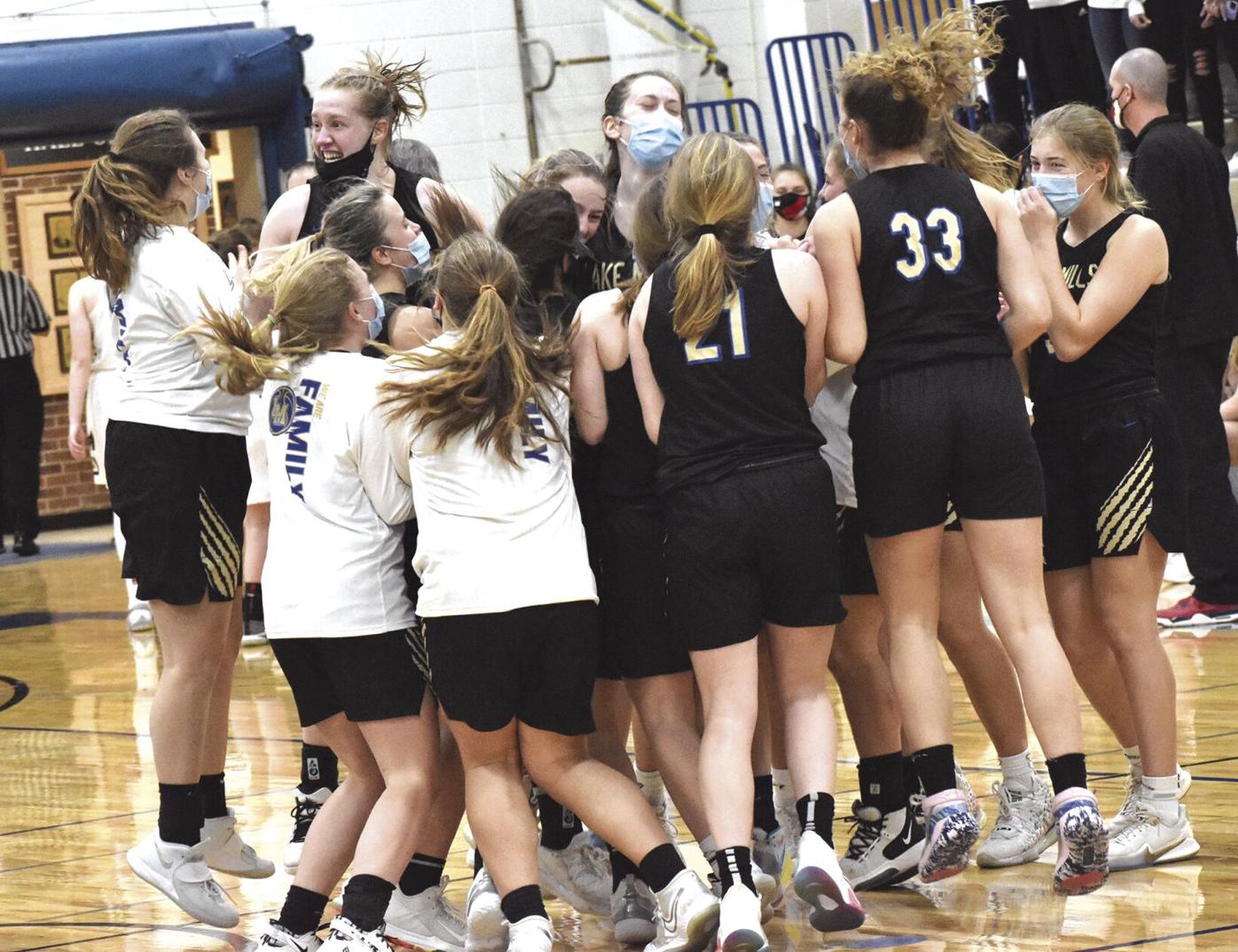 The Lake Mills girls basketball team celebrates clinching its second WIAA Division 3 state tournament appearance in as many seasons after a 65-59 double overtime victory over Marshall at Cambridge High School on Saturday. 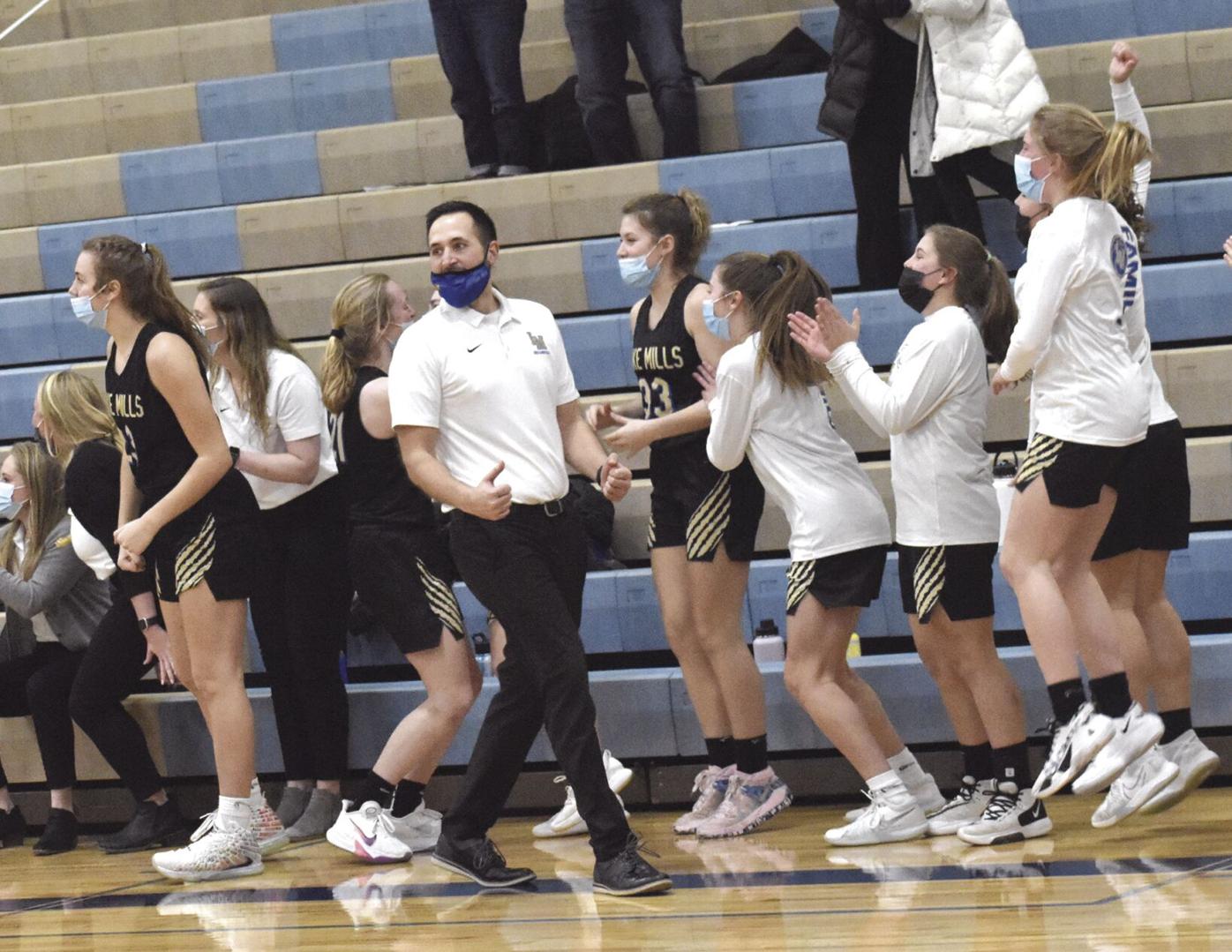 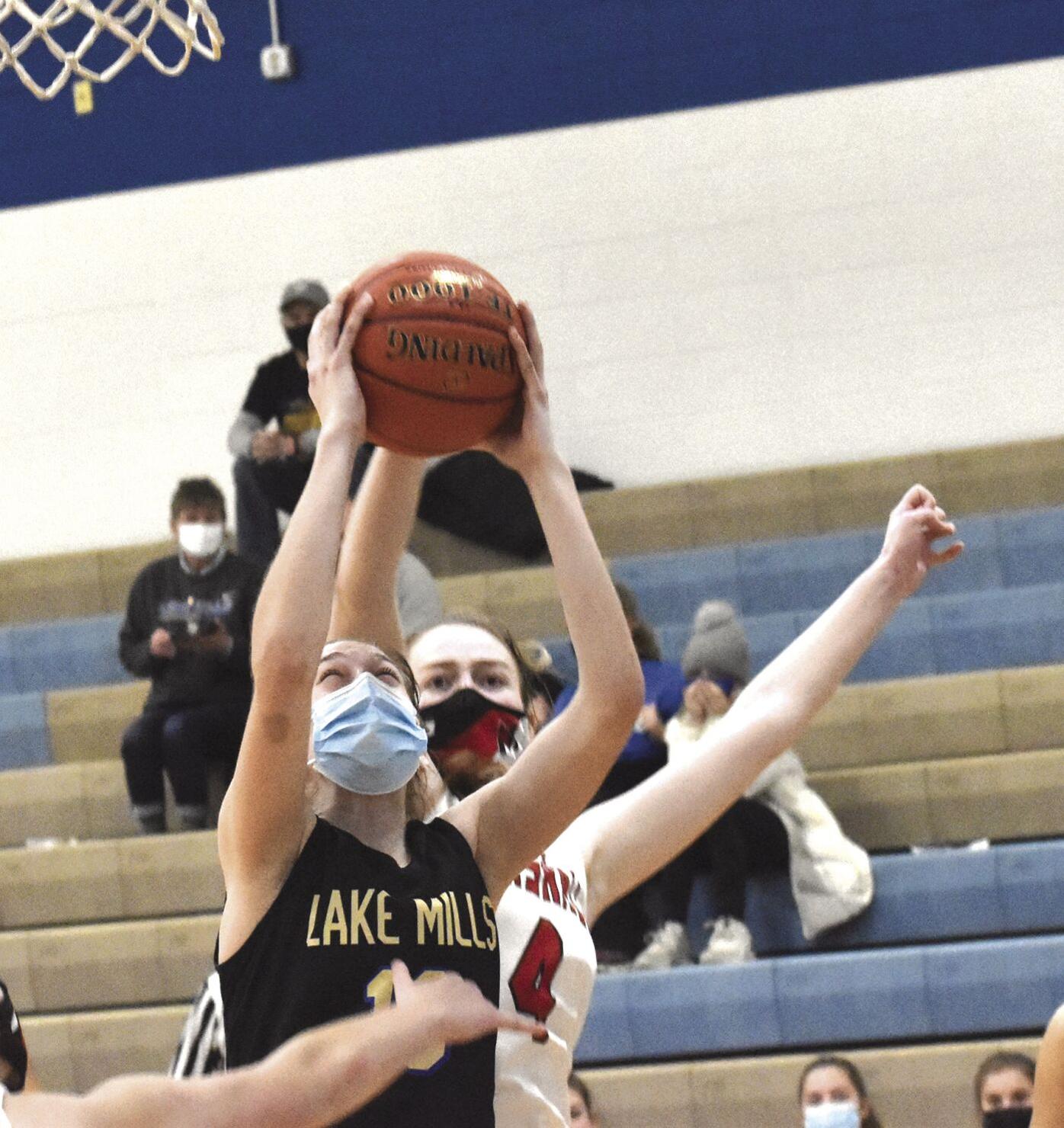 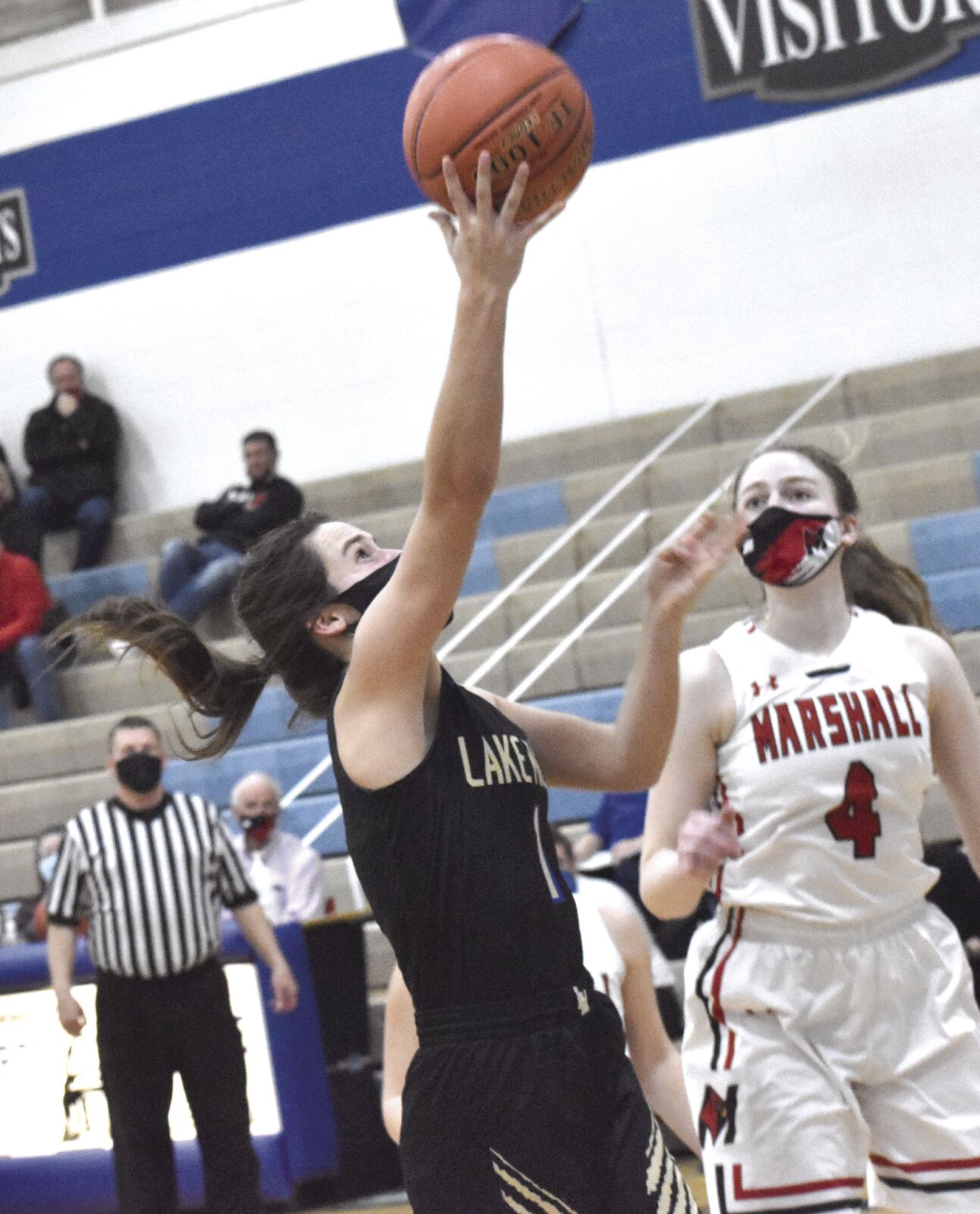 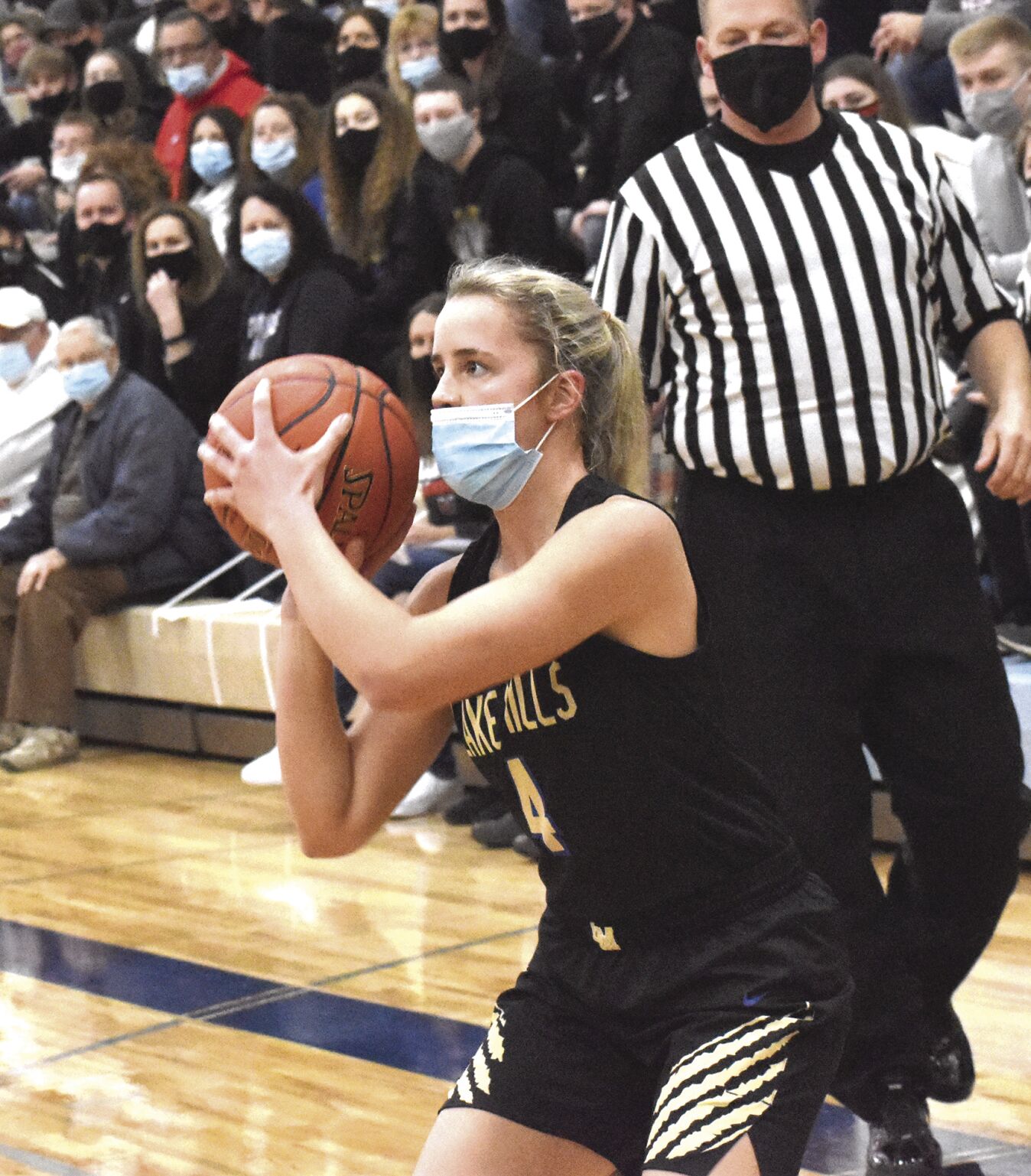 Lake Mills senior guard Ava Wollin hits a 3-pointer during the first half of the team's WIAA Division 3 sectional final against Marshall at Cambridge High School on Saturday. The L-Cats won 65-59 in double overtime and Wollin scored 14 points. 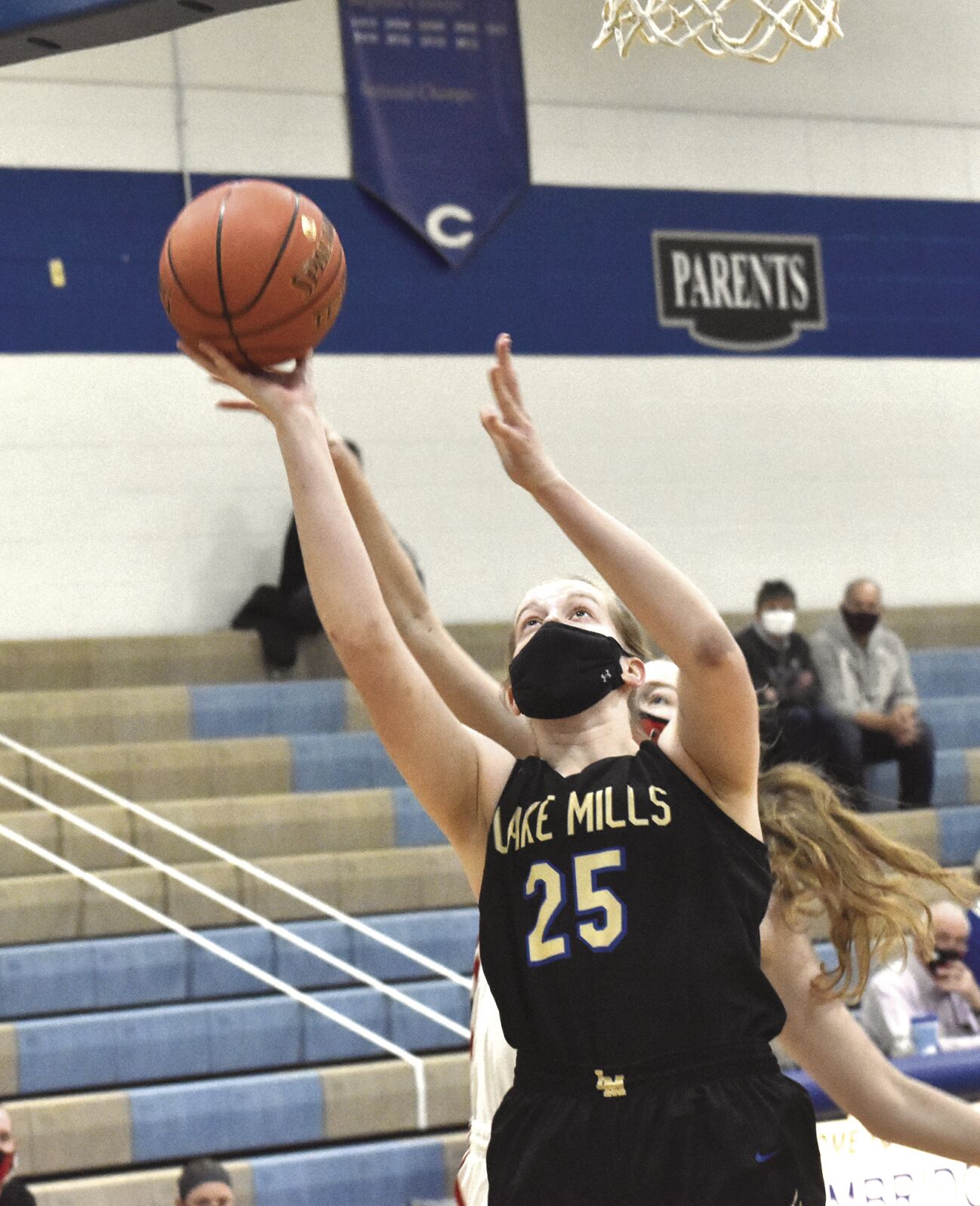 Lake Mills senior center Kayla Will shoots inside during the first half of the team's WIAA Division 3 sectional final against Marshall at Cambridge High School on Saturday. The L-Cats won 65-59 in double overtime and Will scored 10 points. 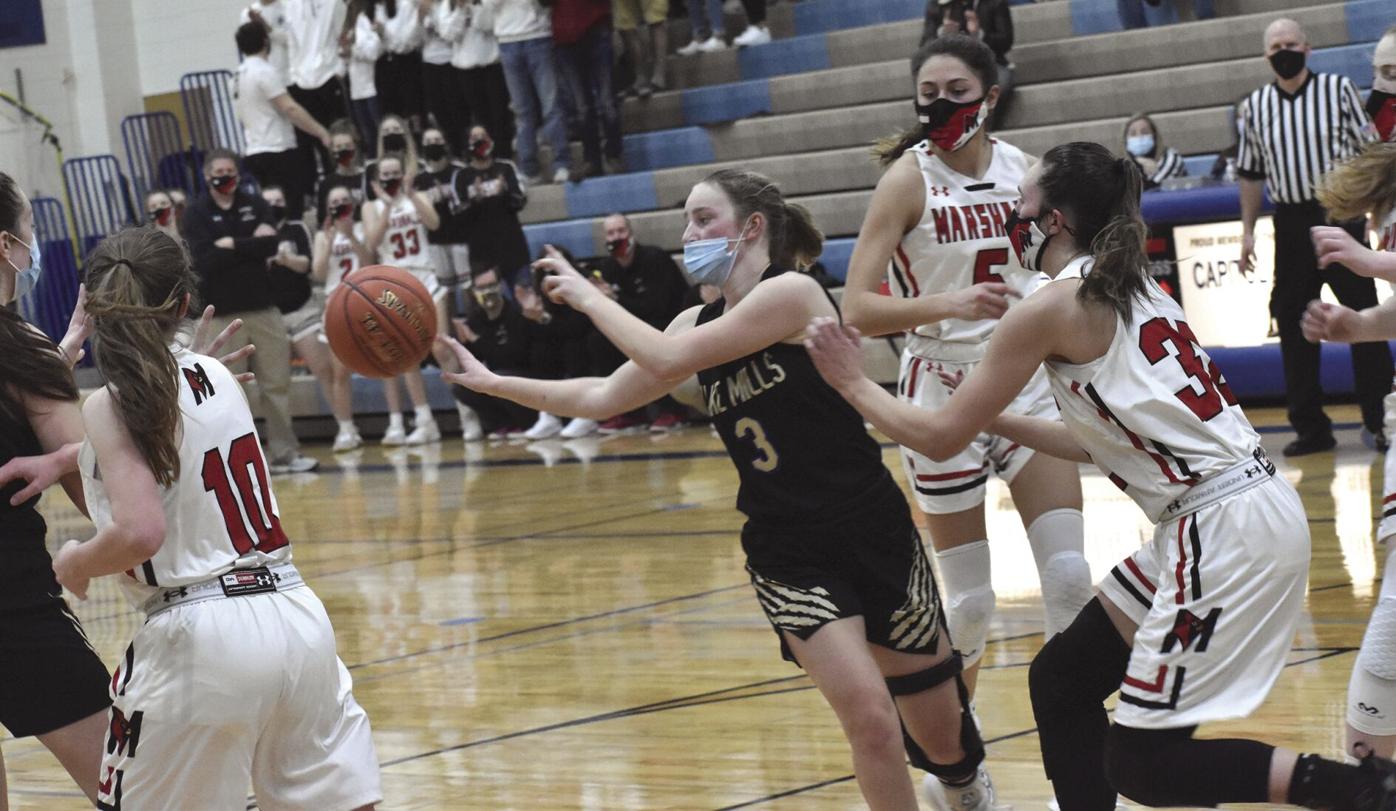 Lake Mills senior point guard Julianna Wagner passes out to the perimeter during the team's WIAA Division 3 sectional final against Marshall on Saturday at Cambridge High School. The L-Cats won 65-59 in double overtime. 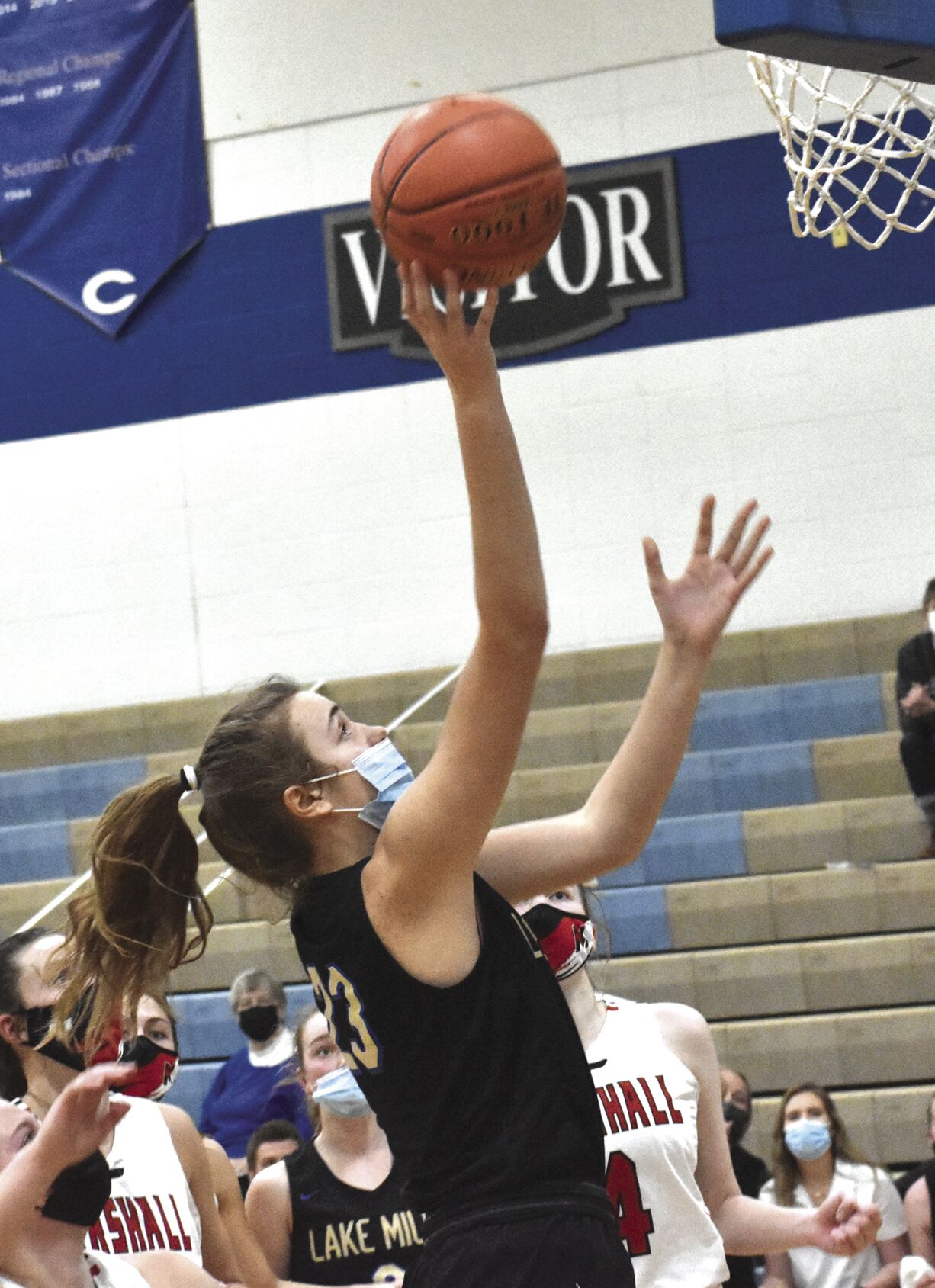 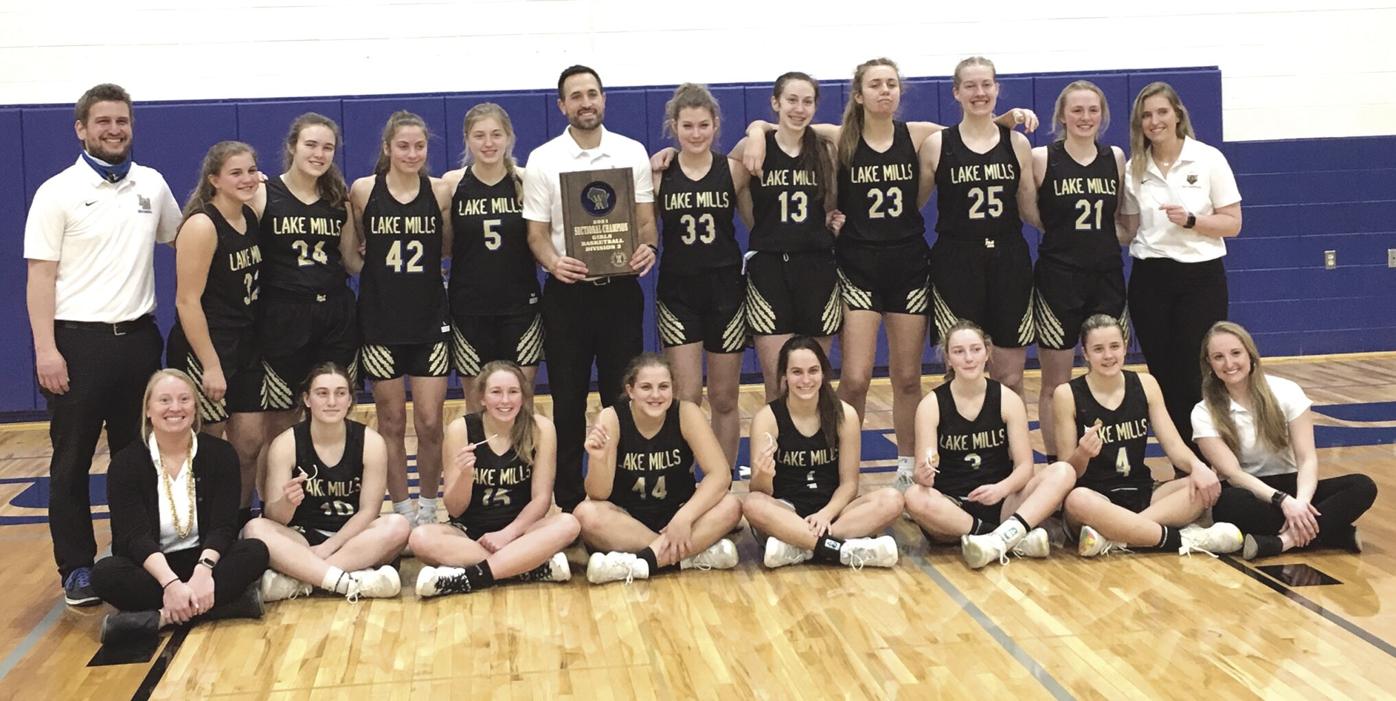 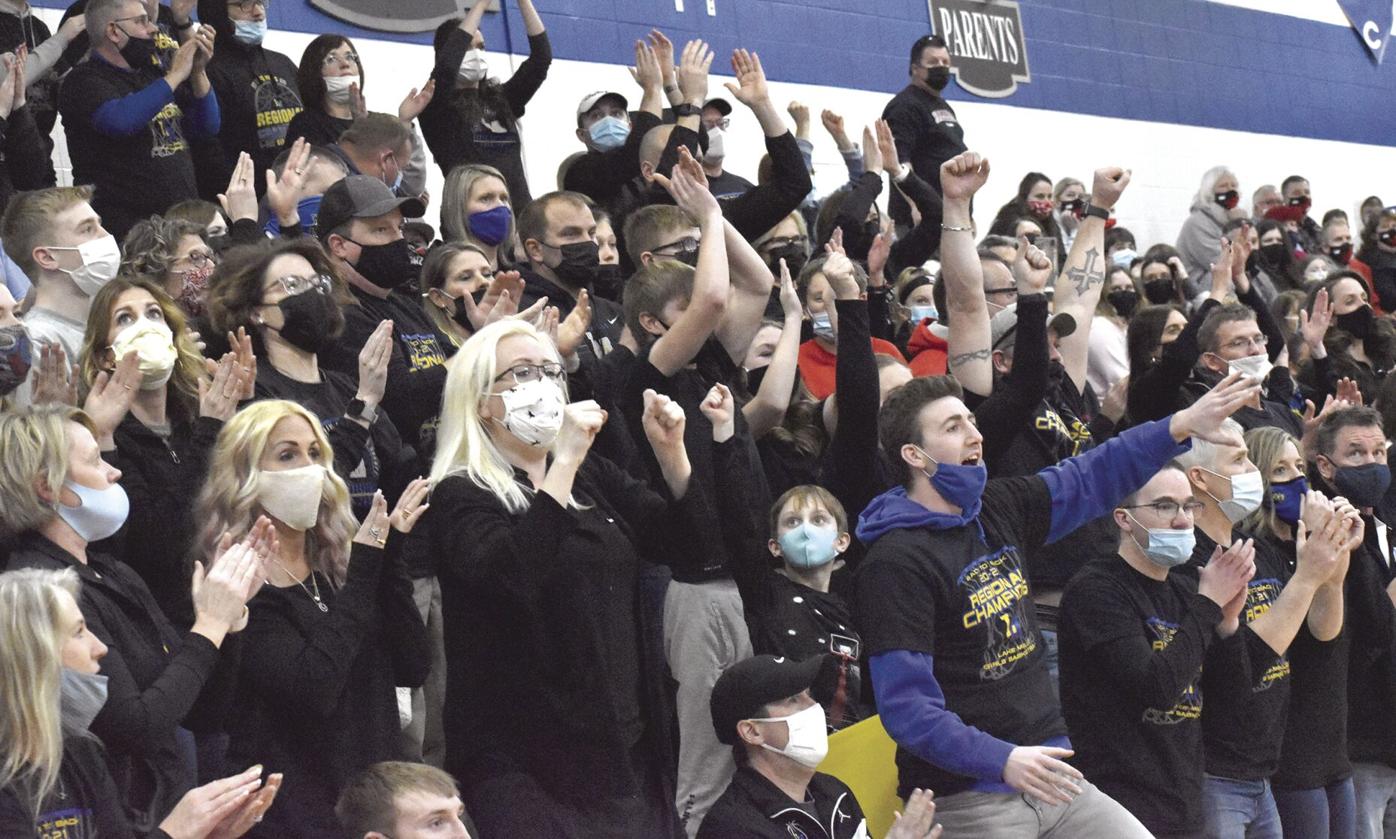 The Lake Mills girls basketball team celebrates clinching its second WIAA Division 3 state tournament appearance in as many seasons after a 65-59 double overtime victory over Marshall at Cambridge High School on Saturday.

Lake Mills senior guard Ava Wollin hits a 3-pointer during the first half of the team's WIAA Division 3 sectional final against Marshall at Cambridge High School on Saturday. The L-Cats won 65-59 in double overtime and Wollin scored 14 points.

Lake Mills senior center Kayla Will shoots inside during the first half of the team's WIAA Division 3 sectional final against Marshall at Cambridge High School on Saturday. The L-Cats won 65-59 in double overtime and Will scored 10 points.

Lake Mills senior point guard Julianna Wagner passes out to the perimeter during the team's WIAA Division 3 sectional final against Marshall on Saturday at Cambridge High School. The L-Cats won 65-59 in double overtime.

CAMBRIDGE — Forty-four minutes of basketball. A lifetime of memories.

"This group of girls, we've been taught from a young age to fight until the very last second," Guerrero said. "We all knew with 10 seniors on the team, we had to play until the last second if we didn't want it to be over. We had to keep fighting."

"We were positive, knew what we were going to do coming in and knew what we had to do," said senior center Kayla Will, who scored 10 points. "We executed really well. Had a few times (the execution) wasn't great but every team has that.

"We always have trust in each other, we were always positive and always believed in one another. That really helped. We are really just a family, it's awesome."

The Cardinals took a brief lead, 59-58, in the second extra session on a pair of free throws by sophomore guard Allie Rateike with 1 minute, 20 seconds to play.

Guerrero, after being fouled underneath by senior forward Anna Lutz, hit both at the line to give Lake Mills (23-2) the lead for good with 1:00 left.

Guerrero then used her 6-foot-1 reach to block a shot by senior guard Laura Nickel, grabbing possession before being fouled. She hit the first and missed the second, but Will grabbed the board. Marshall tried to jar it free, knocking the ball out of play last touched by the Cardinals.

The L-Cats took 22 seconds off the clock with perimeter passes before using a timeout. Senior guard Julianna Wagner was followed immediately on the inbounds, hitting both to make it 63-59 with 22.4 remaining. Will rebounded a Cardinal misfire at the other end and Guerrero connected on two at the stripe for the final margin.

"Our team just fought so hard to get to that point in the game, you just have to make those free throws for your team at that point," said Guerrero, who went 7-for-8 at the line and scored seven points in overtime.

"We finish practice usually with conditioning and shooting 1-and-1s," fourth-year Lake Mills girls basketball coach Brandon Siska added. "They're used to it. That's four years of working on free throws at the end of practice. We have a very good free throw shooting team. They've had to knock these down in big games before. Confident when they go to the line especially in that situation they are going to knock them down to close the game out."

Lake Mills now returns to the Division 3 state tournament, which will be played Friday only at Oshkosh's Menominee Nation Arena.

"Going back to state is surreal at this point," Siska said. "We had never been to state before last season and now to go there twice is huge. There's lots of people that coach an entire lifetime and can't get there. We're going to enjoy every minute of it. See if we can finish this thing out this year."

Senior guards Taylor Roughen and Ava Wollin each added 14 points and hit four 3-pointers for the L-Cats, who avenged a 61-58 setback to the Cardinals (22-4) from Feb. 2.

"My teammates were definitely spreading the floor," Wollin said. "As Wagner or Taylor drove to the middle, they kicked it out and that's when I would knock it down."

Nickel, a Northern Illinois signee, tallied a game-high 28 points and combined with Lutz, who finished with 19 points and has signed with UW-Milwaukee, to register 16 of the team's final 18 points.

"They're very very good basketball players," Roughen said. "They have great moves and can both attack the basket. We had good helpside, our posts did an amazing job guarding them and staying tall so they had tough shots."

There was jubilation on one side and agony on the other.

"Brandon and I both feel like our programs are two of the best in the state along with (La Crosse) Aquinas," Marshall girls basketball coach Doug Pickarts said. "We both agreed after the game that these two teams deserve to be playing in the state tournament and not in a sectional final game. It just stunk that somebody had to lose that game."

A pivotal moment came with 3:30 left in regulation. L-Cat senior wing Jade Pitta made the first free throw and missed the second. Will snatched the rebound in the lane, kicking to a wide open Roughen for 3 to give Lake Mills a 47-45 edge.

"I knew I needed to hit that shot for the team," Roughen said. "We all want to continue playing and get the gold ball. Knew that shot was big and I needed to hit it so we could continue on and then play tough defense on the way back to eventually get the win."

Nickel quickly tied it with a strong take.

Lake Mills was patient on its ensuing trip, which lasted over a minute, before spacing the floor, allowing for Roughen to cut through the lane and finish with her right hand with 1:10 left.

The L-Cats then missed three bonus free throws and Lutz was fouled on a lefty drive by Guerrero with 36.5 remaining, hitting both to tie it.

Guerrero scored inside on a look from Wagner 13 seconds later for a go-ahead score. Nickel wouldn't be denied at the other end, tying it with a shot in the lane with 10 seconds remaining.

Lake Mills called timeout with 7.7 to play before Roughen drove baseline and was blocked by Lutz at the rim. Marshall senior wing Mya Andrews missed a contested halfcourt shot at the buzzer.

"We have so much grit and so much heart," Siska said. "This was two very good teams going at it. Hats off to Marshall, one of the best teams in the state. For that senior class, two state titles and four straight sectional championships. That's a state championship caliber team we beat.

"We by far had the toughest road to reach state. It took us until the last second to win the other night (against Prairie du Chien) and then double overtime here. We just never quit. Just so proud of our kids. Such a hardworking group. Blessed and lucky to coach them."

Nickel hit a putback high off glass to give the Cardinals a two-point cushion. Roughen countered by shooting a 3-pointer, which missed but Wagner chased down the board down low. After a reversal, Roughen buried a big time 3-pointer to make it 56-55 Lake Mills with 1:20 left.

Nickel then hit what looked to initially be a continuation layup. The referees ruled the contact came on the floor, so Nickel went to the line in the 1-and-1 and went 1-for-2 to knot it up once more.

Andrews blocked a shot attempt inside by Will with 25.8 remaining, but Marshall couldn't get a game-winning shot up as Roughen dug down and stole it from Nickel near the lane with 5 seconds left. Lake Mills called timeout with 1.6 left and Roughen couldn't hit a contested deep look at the buzzer.

In the second overtime, Will scored on a feed from Guerrero on the opening trip for the team's only points before Guerrero's free throws with a minute left.

"We played with a lot of heart," Wagner said. "All of these girls playing for our team put everything out there and left everything out on the court. Nobody wants to be done. Every one worked so well together. We gave it all the hustle and heart we had. Kept going, we had to be tough and keep fighting."

A fastbreak 3-pointer by Wollin, who scored 11 first-half points, made it 14-6 L-Cats early. Wollin then hit twice from the corner to make it an 11-point lead, the team's largest of the game, with 10:15 to go.

Marshall had plenty of answers, including two 3s and eight quick points by Lutz.

L-Cat senior forward Hannah Lamke hit a 3-pointer despite being fouled and Wagner assisted on a Guerrero bucket to make it 27-19 with 4:45 remaining. Marshall closed the half on a 10-2 spurt to tie it.

"I actually thought once we tied it up at half we were in good shape," Pickarts said. "But (Lake Mills) is so talented and they shoot the ball so well from the outside."

In the second stanza, Marshall had momentum from the get-go, pulling ahead 41-38 with 11:00 left on a backdoor cut and score by Rateike. Roughen then broke a lengthy scoring drought with a corner 3-pointer to tie it. Roughen went baseline on Lake Mills' next trip before hitting Guerrero for two.

Trailing 45-43 with 4:57 left, Roughen had a chase down block on Rateike but the team couldn't capitalize on the other end. Marshall turned it over at the 4-minute mark before Roughen's 3-pointer with 3:30 left.

"Defensively to start the game we were outstanding," Siska said. "Laura is very tough and a Division 1 ballplayer, she decided to take over the game today. With it going double overtime and our pressure, she didn't have enough left in the tank to hit the last few shots she took. Wore on them kind of like the other night against Prairie du Chien. Kept plugging at it, kept playing and believing we were going to find a way to pull it out. We made just enough plays to do that."

"I don't have any words to describe it," Wagner said of reaching back-to-back state tournaments. "It just feels awesome to be able to do it with these girls I've been playing with since fourth grade."