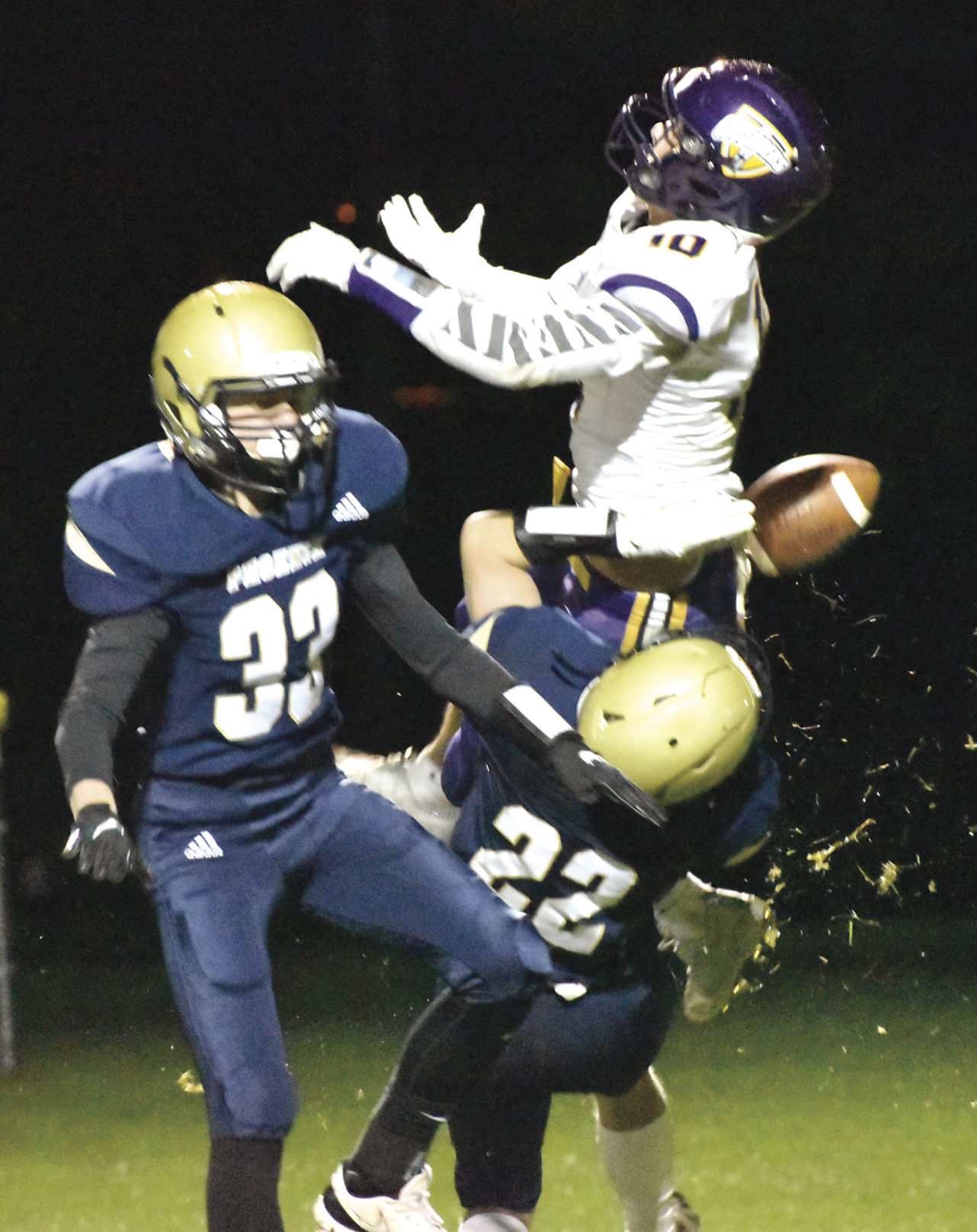 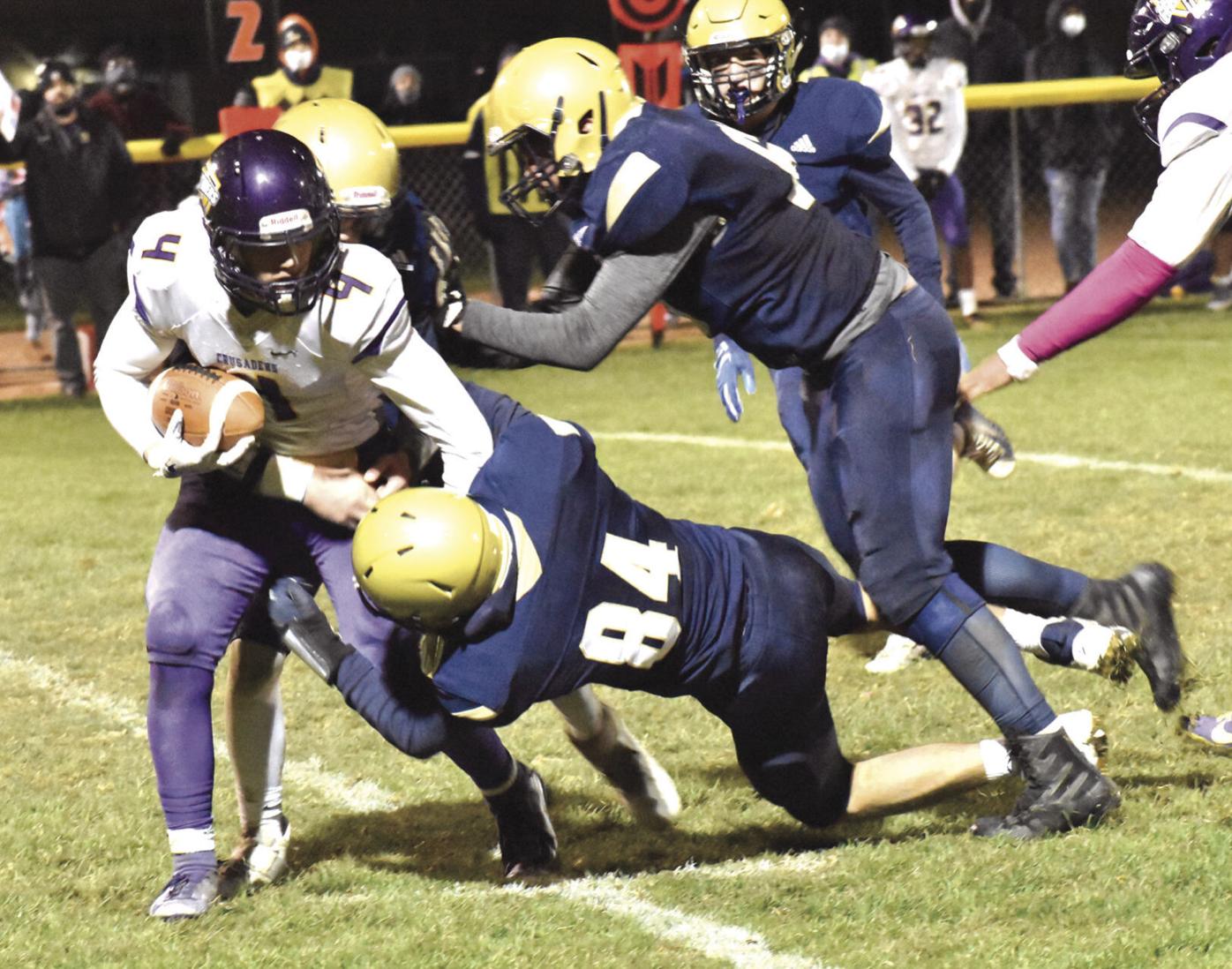 Luther Prep senior linebacker Ethan Buege (84) is one of three Phoenix players to tackle Racine Lutheran senior running back Nolan Kraus during a nonconference game at LPS on Friday. The Phoenix won 19-6. 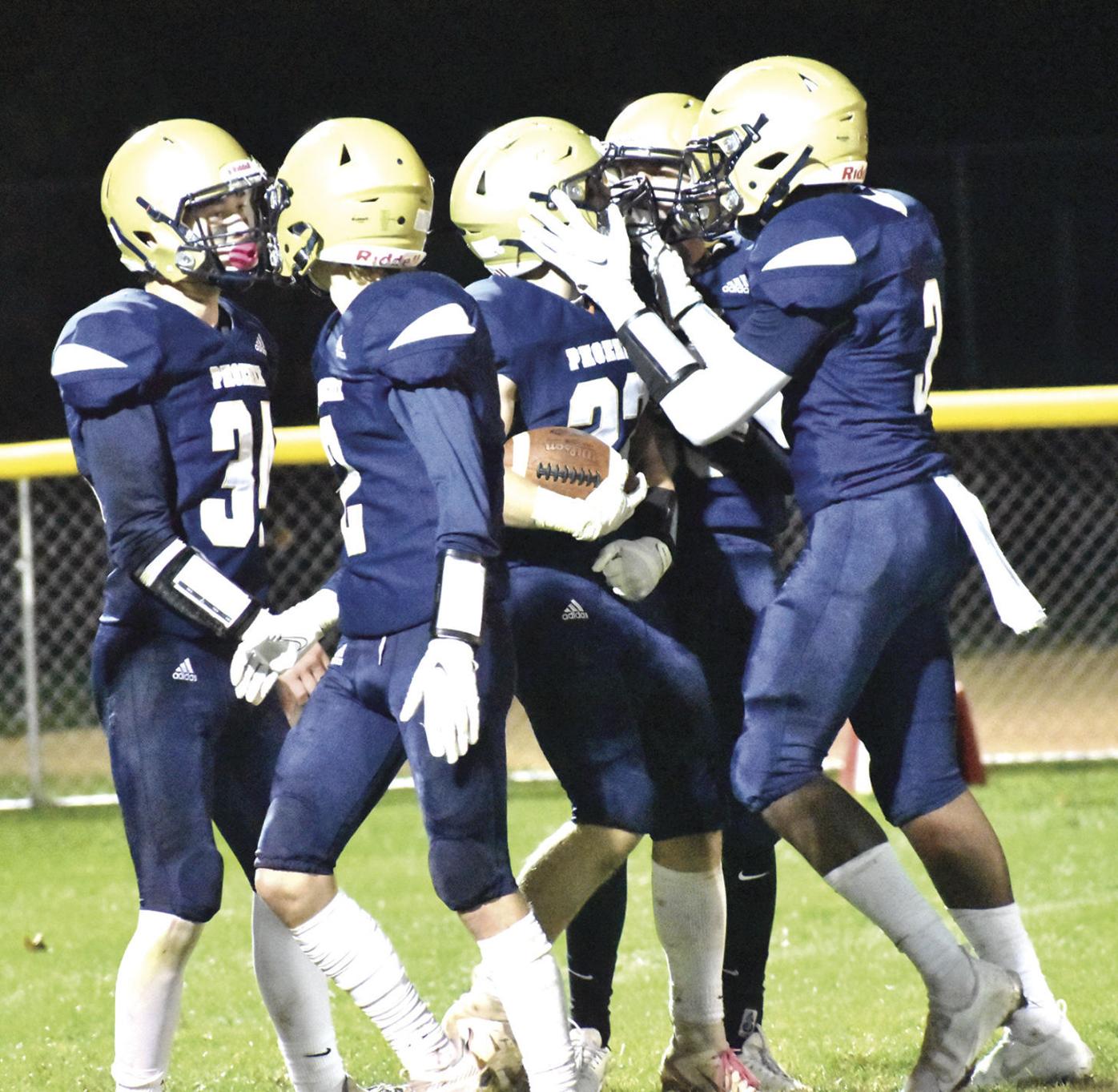 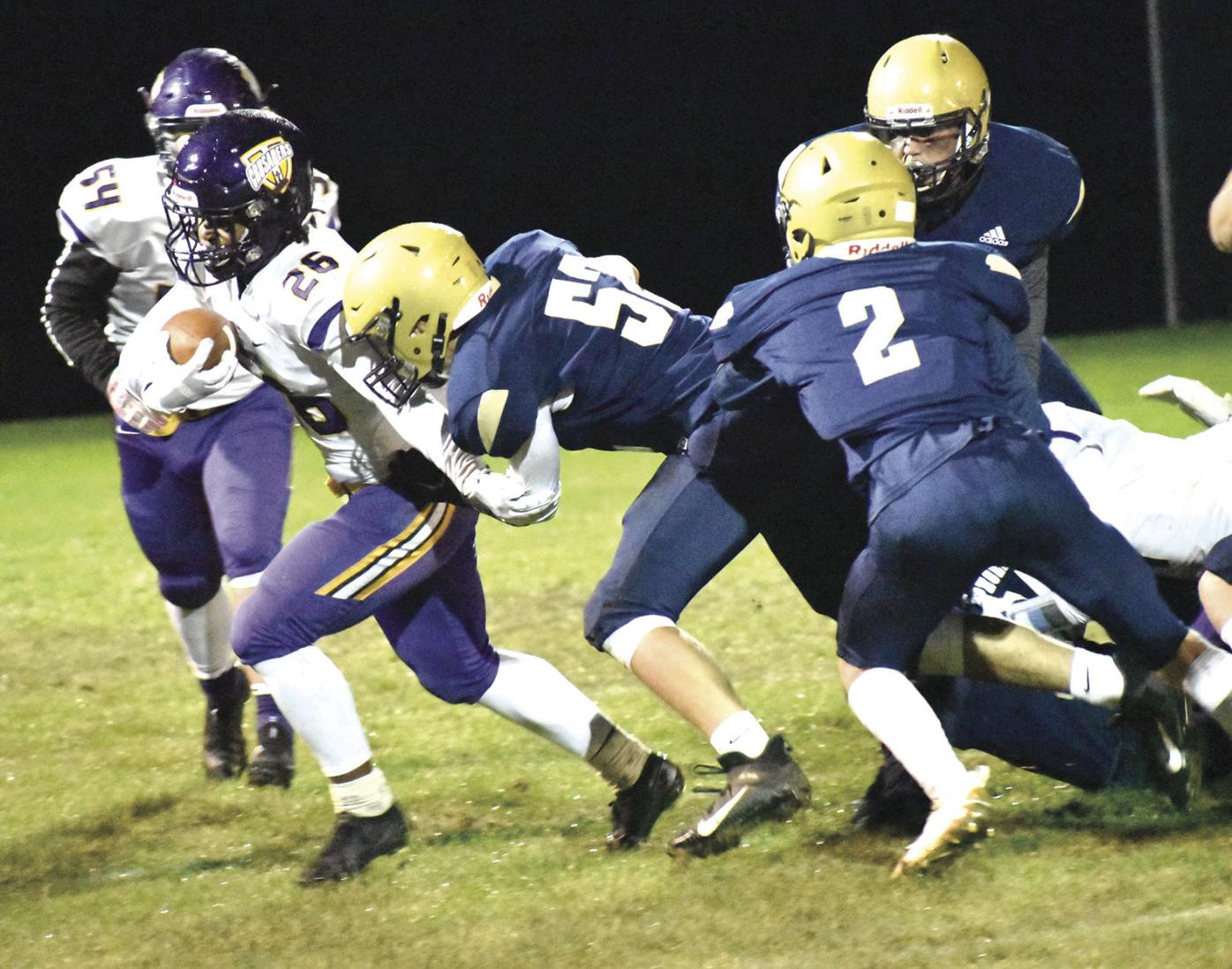 Luther Prep senior linebacker Ethan Buege (84) is one of three Phoenix players to tackle Racine Lutheran senior running back Nolan Kraus during a nonconference game at LPS on Friday. The Phoenix won 19-6.

Jon Holtz did it all.

The senior returned his second interception for a score, helped force another pick with a tip, scored on a rush and screen pass.

He also returned punts and punted himself, pinning the opposition deep in its territory on multiple occasions.

Holtz’s three scores and a stifling defensive effort helped Luther Prep’s football team to a 19-6 win over state-ranked Racine Lutheran in a nonconference game on Senior Night Friday at LPS.

“Everyone talks about a brotherhood of a team but especially at this school, we really are family,” Holtz said. “I’m going to remember all the moments we’ve had in practice, in the locker room and on the field for the rest of my life.”

There were plenty of moments on this night.

“It’s great. I didn’t even know they were state-ranked,” Luther Prep football coach Justin Gregorius said of the win. “It’s great to send these guys out like this on this field. It’s a special field and a special campus. It’s good for our school. Very proud of them.”

Luther Prep (2-2) led 7-0 at the break before the Crusaders, the AP fifth-ranked small-sized school, switched signal callers, putting senior Nolan Kraus behind center, and scored on the opening drive of the second half. Junior tailback Isaiah Folsom had a 20-yard carry to move the sticks and Kraus got the edge on 3rd and long to put it deep in Phoenix territory. Junior fullback Kimyron Bonner scored on an 11-yard rush a few plays later to make it 7-6 after the 2-point run failed with 8 minutes, 22 seconds left in the third quarter.

From there, it was all Phoenix.

Senior fullback Rees Roecker moved it into Crusader territory with a nine-yard scamper.

On 2nd and 12, Luther Prep drew up a fake to the right with a screen the other way to Holtz, who drifted out of the backfield and caught an on-target throw from senior quarterback Elijah Shevey. Holtz got the boundary, picking up a block, on a 43-yard receiving score that upped the lead to 13-6 after the point after try was blocked.

“That play was a fake to the right and a screen to the left,” Holtz said. “I followed my main man Jonathan Wiedenhoeft for a touchdown, he lead the way.”

“Jon Holtz had a great game,” Gregorius added. “I don’t know what other way to say it. Just his effort offensively and defensively. We see that every day in practice and tonight the fans got to see it. I’m happy for him.”

After the teams traded punts, the Crusaders (3-1) were backed up on their own end heading downwind. On a trick play reverse, sophomore quarterback Eric Rossa floated a pass over the middle into the waiting arms of Holtz. The safety sprinted down the sideline and beat one guy to the end zone to put an exclamation on the evening, making it 19-6 with 2:50 left in the third.

“We were expecting this all week,” Holtz said of the play call. “Coaches were drilling us in practice. Once you see it, instinct just kind of kicked in. Then my boys took me down to the end zone.”

After exchanging punts again, the Crusaders were tasked with navigating a long field after Holtz’s punt was downed at the 14.

An ill-advised pass over the middle by junior Camdin Jansen was tipped in midair by Holtz before senior linebacker Ethan Buege came away with it for the pick, returning it inside the 20.

“That’s just what they teach us, go make a play on the ball,” Holtz said. “I did and Ethan Buege was there to pick it off.”

Luther Prep turned it over on downs with its ensuing possession as Shevey’s fourth-down pass in the end zone fell incomplete.

With six minutes to play in a two-score game, Holtz had another play left in him.

Kraus, now playing receiver, turned back upfield on a third-down catch trying to secure extra yards but was stripped by Holtz, who recovered near midfield.

The Crusaders never threatened late and their final drive included a pair of sacks, the second of which was a combined effort by senior defensive lineman Yuri Soloviyov and senior linebacker David Baumann, before Jansen was pushed out short of the line to gain on fourth down.

“It means so much especially at the school we are at,” Holtz said. “All the work we have put in. We’ve worked so much and really needed this one.”

“It was great team D,” Gregorius added. “They all did their job and got hats to the ball. It was just an outstanding defensive effort.”

In the first half, Luther Prep scored on the opening possession. Shevey rolled left and found senior receiver Ben Cole for a gain for 22 on 3rd and 8. Holtz, after temporarily bobbling a pitch, gained three on a 4th and 2 play inside the Crusader 25. Holtz then followed his fullback right up the middle for an 11-yard rushing score six minutes in.

Racine Lutheran, which had scored 140 points through three weeks and lost three total regular-season games since 2017, had a drive extended by a face mask penalty but Jansen was pushed out just short of the first-down marker on fourth down. Both sides then went three-and-out to close the opening frame with senior defensive back Atticus Lawrenz in tight coverage downfield to force a punt.

Luther Prep’s next drive stalled and the punt snap to Holtz, who is 5-foot-10, 170 pounds, was high. Holtz made a good adjustment to corral the ball but wasn’t in position to get a punt off. Instead, he evaded a defender, picking up speed and creating a little space to get an unconventional running kick off that was went out of bounds near midfield. If Holtz would have been downed instead of getting the kick off, the Crusaders would have been set up with a red zone scoring chance.

Two plays later, Folsom coughed up a fumble that Jonathan Wiedenhoeft, a senior lineman, recovered for the game’s first takeaway.

The Phoenix couldn’t get a drive going after a Roecker first-down run so Holtz punted it down inside the 15.

Crusader junior wideout Gavin Zawicki caught a deep pass to put it at midfield. A few player later, Holtz skied to pick off a deep ball at the LPS 17 to flip the momentum.

Neither side, though, threatened in the final five minutes of the opening half.

Luther Prep ran it 31 times for 92 yards, controlling the line of scrimmage on both sides of the ball.

“We preached all week just how big they were and that they were going to out-physical us and be better than us on the line up front,” Gregorius said. “I think they got sick of hearing that. I’m real proud of how our guys blocked. Without those guys blocking the running backs don’t do what they need to do and the quarterback doesn’t do what he needs to do. Just a total team effort.”

The Phoenix play at Kenosha St. Joseph’s on Saturday at 7 p.m. The game is being played at Westosha Central High School in Salem.

We want to see pictures of your kids in costumes, Halloween decorations, food, and parties from years past. Funny, scary, cute, or silly – send us your spooktacular photos today!