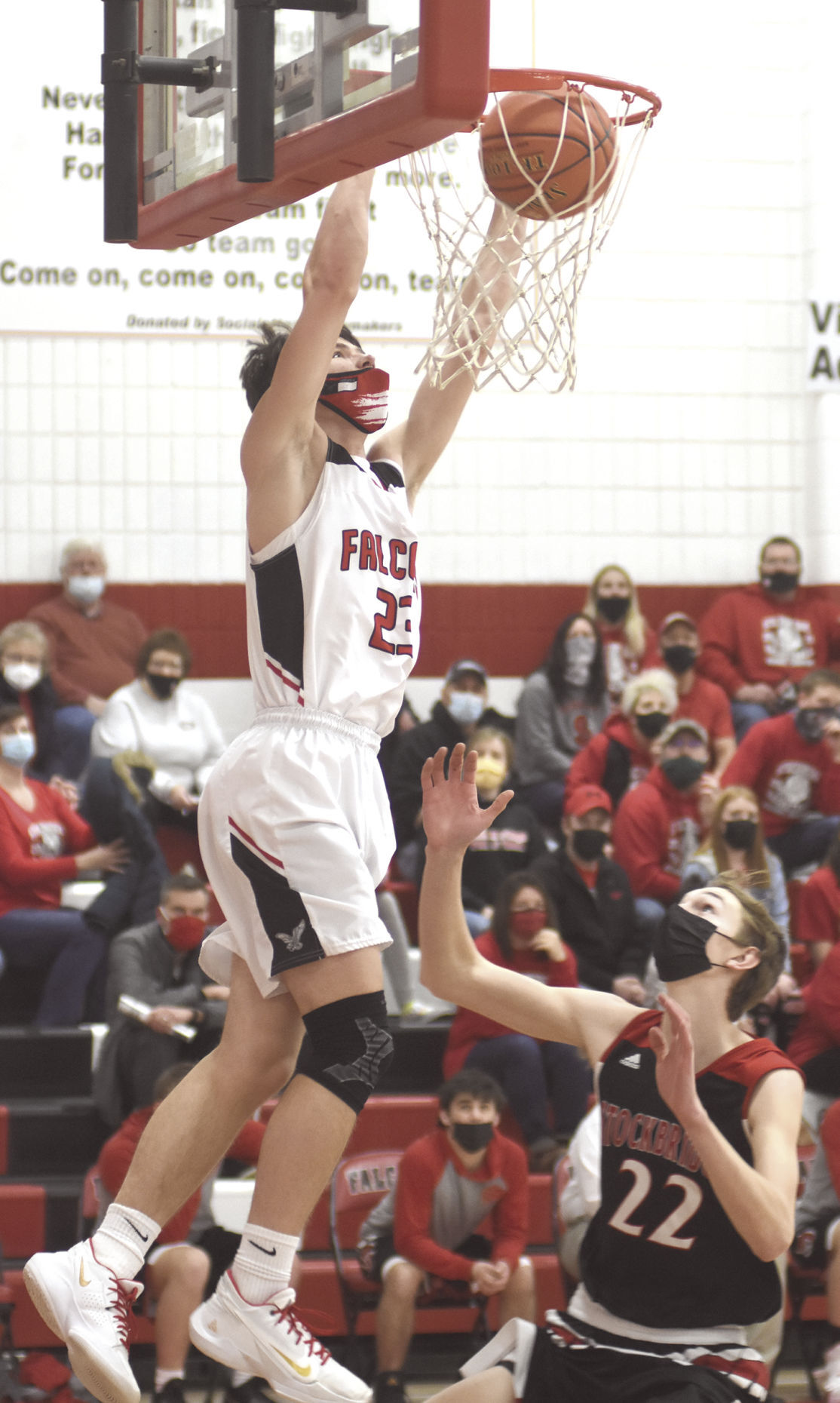 Hustisford junior point guard Gavin Thimm dunks following a steal during a Division 5 sectional semifinal on Thursday at the Falcons’ Nest. The Falcons rolled out to a 52-18 halftime lead and won 82-28. 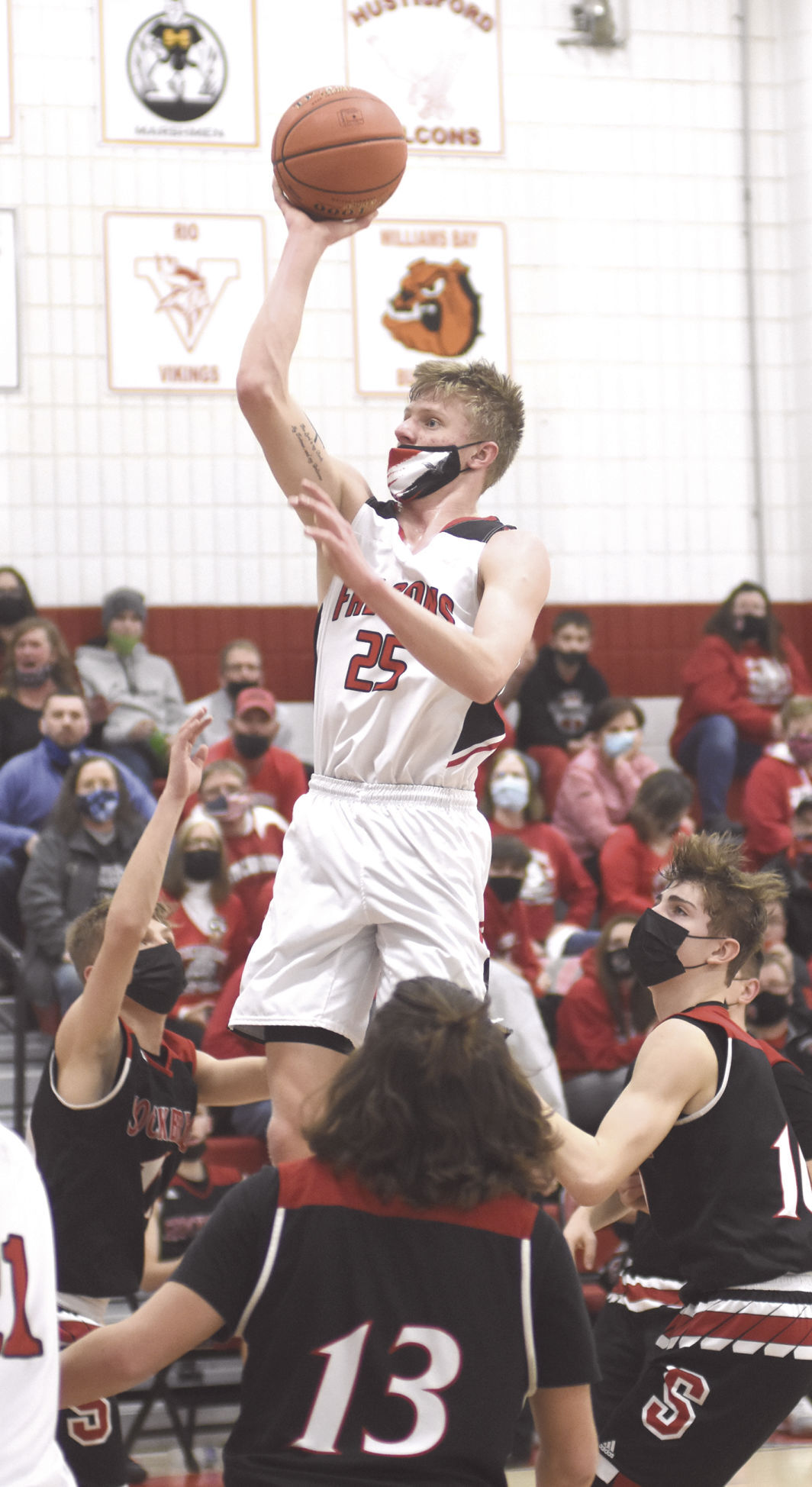 Hustisford senior guard Dylan Kuehl scored 25 of his game-high 33 points in the first half to lead the Falcons to an 82-28 victory over Stockbridge in a Division 5 sectional semifinal on Thursday in Hustisford.

Hustisford junior point guard Gavin Thimm dunks following a steal during a Division 5 sectional semifinal on Thursday at the Falcons’ Nest. The Falcons rolled out to a 52-18 halftime lead and won 82-28.

Hustisford senior guard Dylan Kuehl scored 25 of his game-high 33 points in the first half to lead the Falcons to an 82-28 victory over Stockbridge in a Division 5 sectional semifinal on Thursday in Hustisford.

HUSTISFORD — The Falcons made such quick work of their opponent that they had time to get a little scouting in on their next one.

Second-seeded Hustisford needed just over an hour to polish off third-seeded Stockbridge 82-28 in a Division 5 sectional semifinal on Thursday. After the game ended, the Falcons poured into the locker room and caught the end of the other sectional semifinal.

Top-ranked Husty (15-3) will travel to face top-seeded Monticello (17-3) for the sectional championship on Saturday at 7 p.m. The Ponies were 54-49 winners in overtime against fourth-seeded Shullsburg.

Senior guard Dylan Kuehl scored 25 of his game-high 33 points in an explosive first half for Hustisford. The Falcons led 12-10 with 13 minutes, 37 seconds left in the first half, then broke the game open with a 40-8 run to take a 52-18 lead into halftime.

“(Getting stuck with) that 2 seed fueled us,” Kuehl said. “We knew they were going to be fast and flying all over the place and scrappy. So we knew as long as we were strong with the ball and smart with the ball, we were going to take care of business.”

Kuehl hit a pair of 3-pointers to put the Falcons up 8-2. Stockbridge (21-4) answered with a 3 by sophomore forward Gavin Cullen, who scored seven of his team-high nine points in the game’s first three minutes to trim the lead to 8-7. Senior forward Brody Thimm countered with a 3 from the top of the key and a free throw to push the lead back to five, but Stockbridge senior point guard Levi Piper a quick first step to beat the defense to the basket for a three-point play to cut the lead to two.

That was it for the competitive portion of the game. Senior center Alex Eggleston began the game-breaking run with a three-point play, then recorded the first of his three first half blocks to set up a transition basket by Brody Thimm. Kuehl scored twice with a inbounds basket and a drive, and junior point guard Gavin Thimm got the crowd going with a halfcourt steal and two-handed dunk to make it 23-10 with 10:15 to go in the half.

“That’s three (dunks) year this year and four altogether,” Thimm said. “It felt great. Defense is what holds us down. It gets our offense going. Our defense starts it all. This was definitely one of our best games. We didn’t have a lot of turnovers, we moved the ball well and they left weak side open, so when me and Dylan came into the lane, they collapsed on us the weak side and it was open for our guys and they stepped up and made big shots.”

When the Falcons were getting steals and easy baskets in transition, they were holding the ice-cold Indians to one-and-done shooting from the perimeter. Kuehl scored time and time again in transition and the rout was on.

Stockbridge has been without its leading scorer, senior forward Jake Willett, who averaged 18 points per game before breaking his arm three weeks ago. He would have been hard-pressed to even up this matchup, which only got worse for the Indians.

“He would have made it a little different, but I don’t think it would have (changed the outcome of the game),” Hustisford boys basketball coach Otto Hopfinger said. “They were not used to it (our brand of defense). They were 21-3, but they were not used to playing a team like that. You could see that. All their losses were close.”

Kuehl finished a pair of steals with dunks in the second half, with the first one pushing the lead to 40 points at 58-18 with 14:40 left in regulation. He added 10 rebounds for a double-double and those two steals.

The Falcons will be making their third trip to the sectional title game in the last seven seasons with the win.

“It is my first (trip to the finals,” Dylan Kuehl said. “I am excited.”