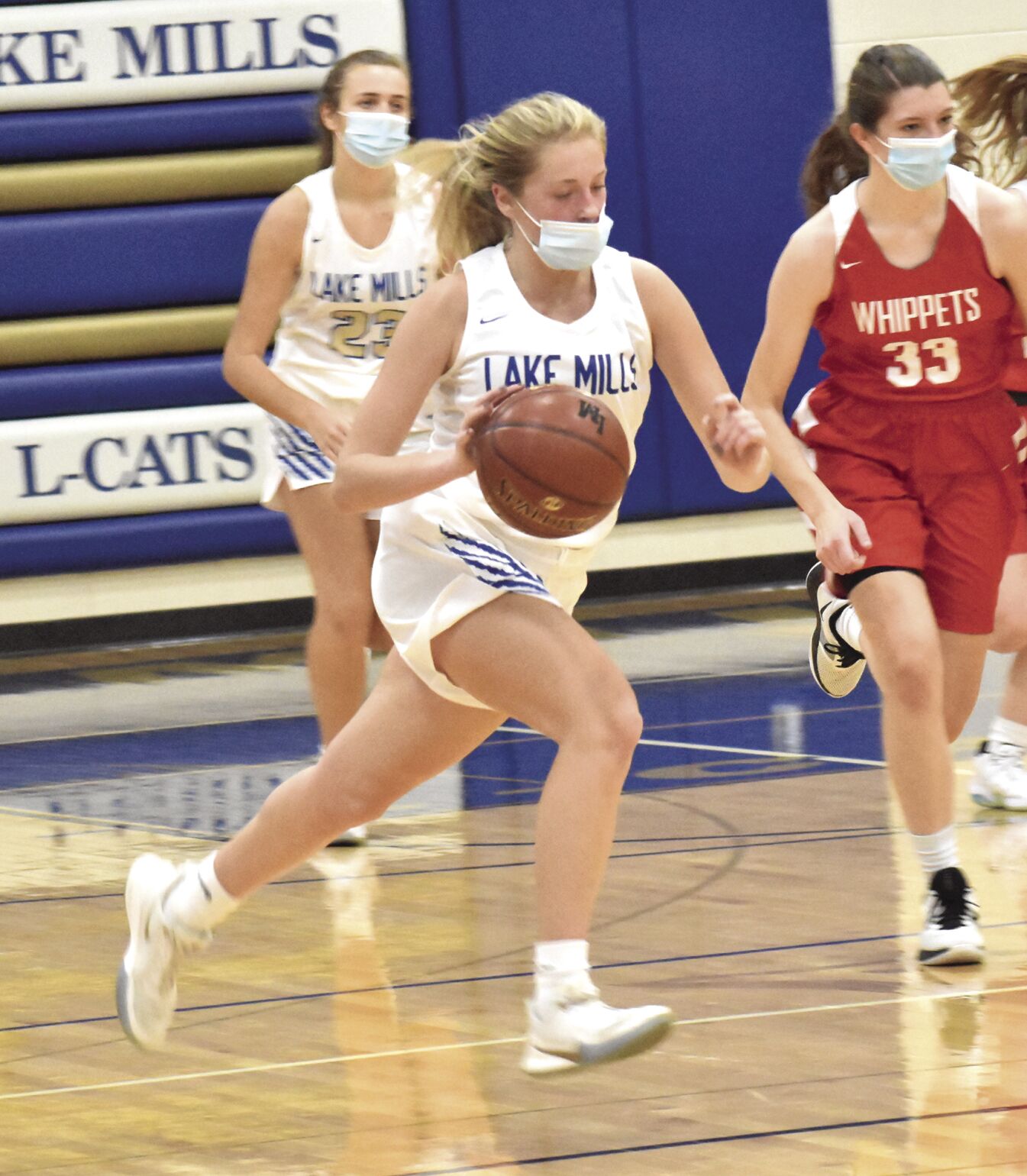 Lake Mills senior wing Jade Pitta brings the ball up in transition during Tuesday's season-opening nonconference game against Whitewater at LMHS. The L-Cats won 62-23 and Pitta scored a co-team-high 12 points. 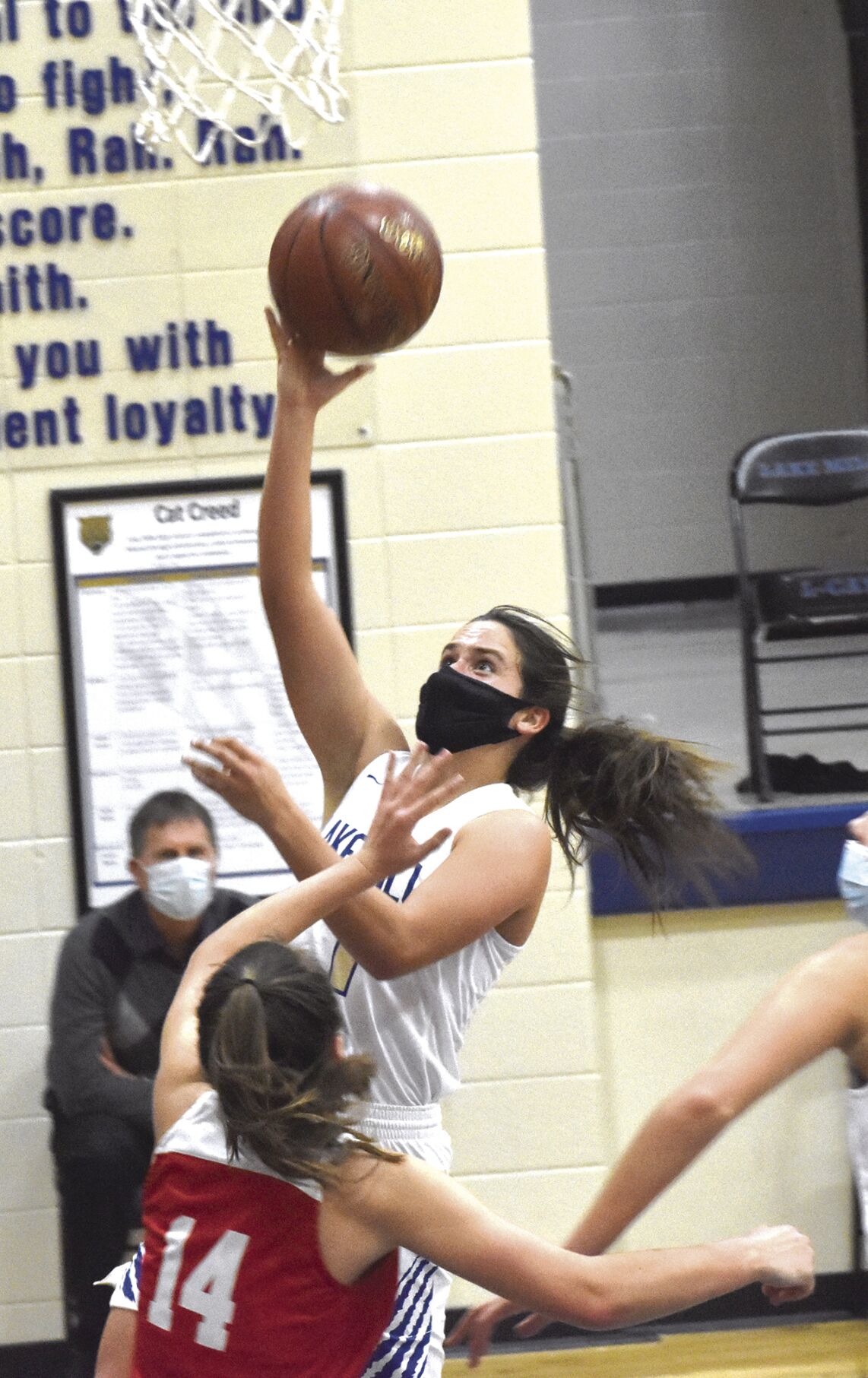 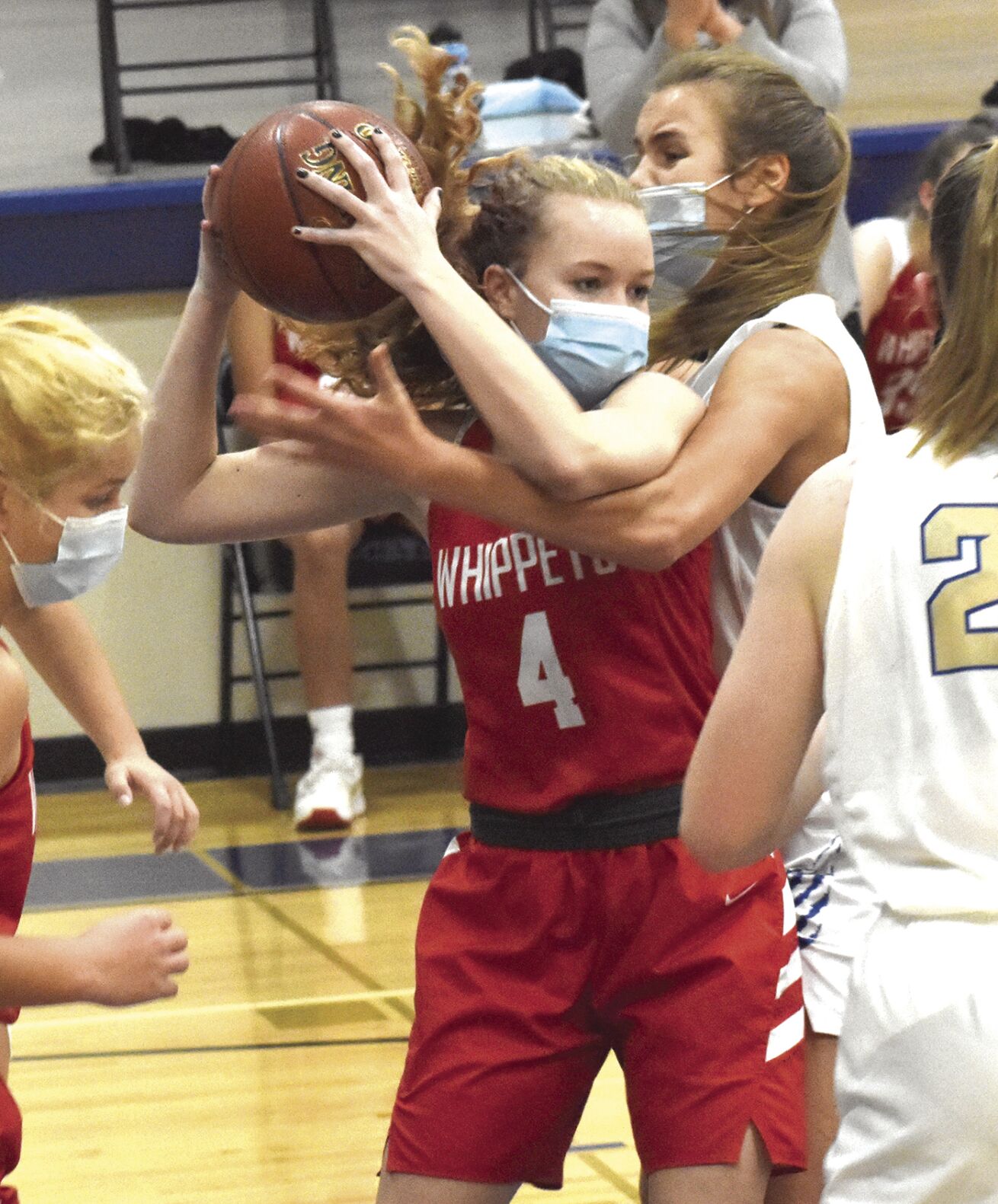 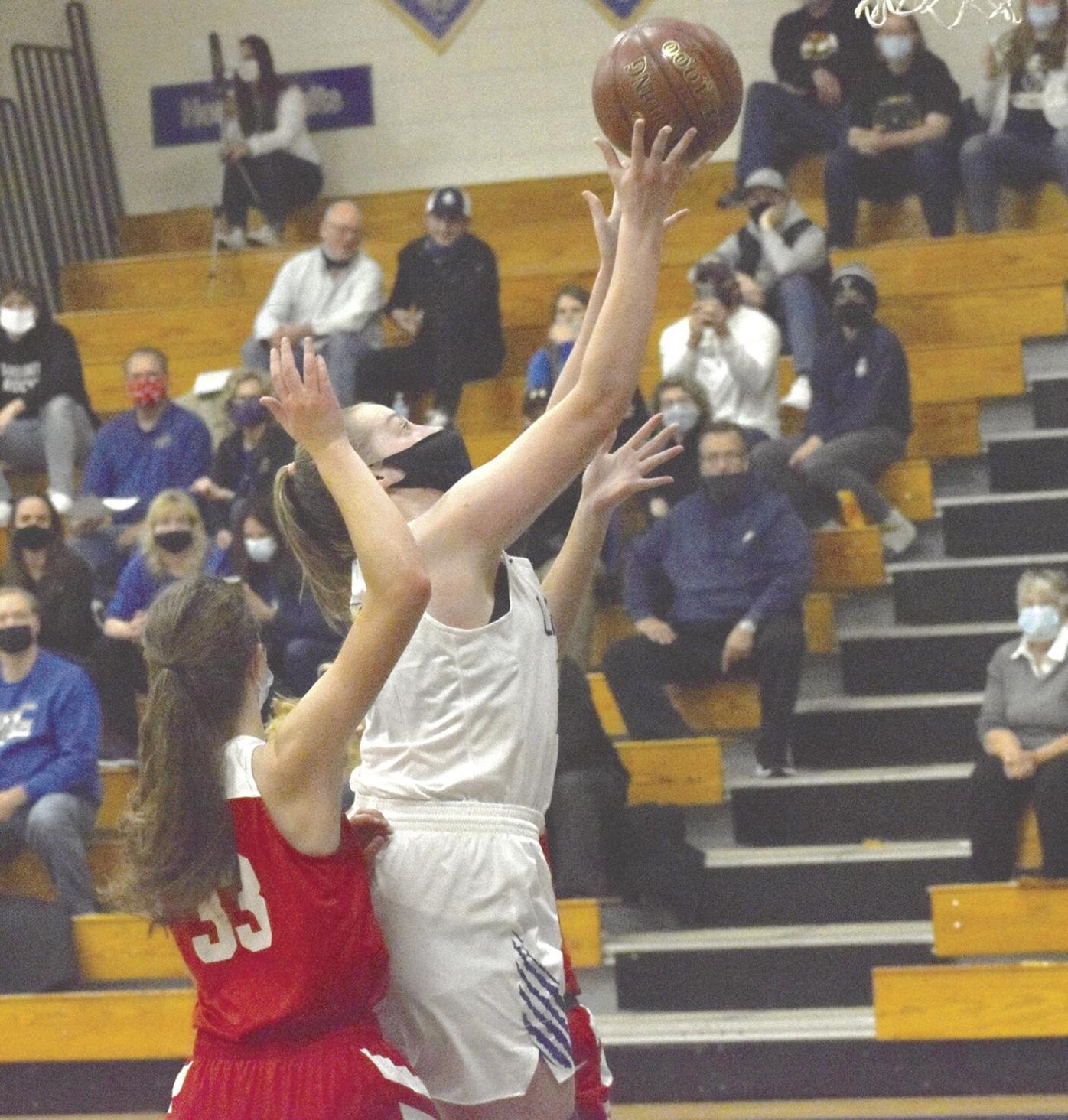 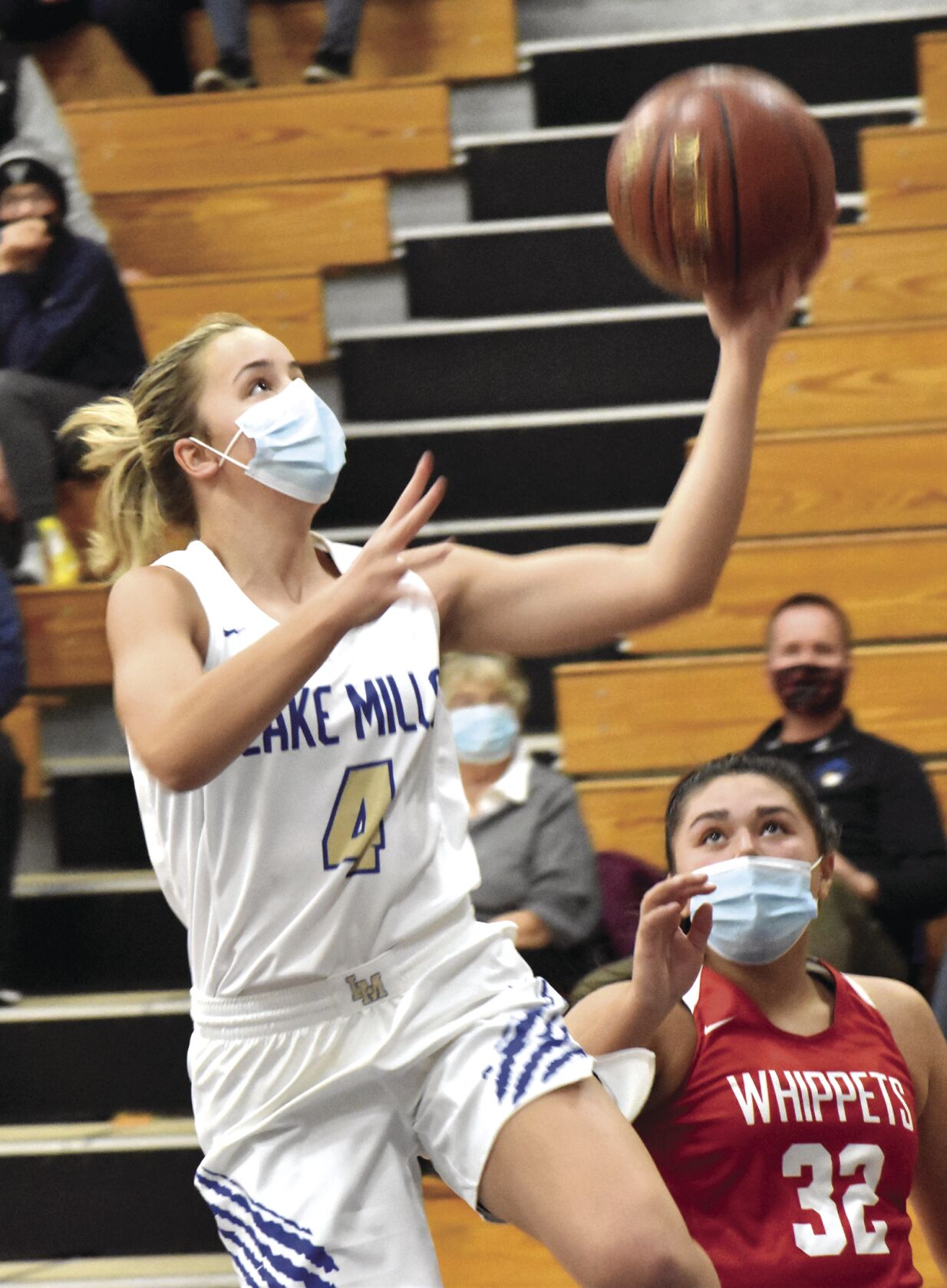 Lake Mills senior wing Jade Pitta brings the ball up in transition during Tuesday's season-opening nonconference game against Whitewater at LMHS. The L-Cats won 62-23 and Pitta scored a co-team-high 12 points.

LAKE MILLS — Familiar faces and a few newcomers helped the Lake Mills girls basketball team to a 62-23 nonconference season-opening victory over Whitewater on Tuesday at LMHS.

"We had some foul trouble early and relied on kids who haven't played varsity minutes," Lake Mills girls basketball coach Brandon Siska said. "They played well and played hard. Our energy was good and we crashed the boards. We have to shoot it better. We went 1-for-20 from 3 in the first half. We also missed 20 shots within five feet of the basket."

The L-Cats also got contributions in the form of newcomers Bella Pitta (a 6-foot-3 sophomore center) and Emily Wollin (a 5-4 freshman point guard) as well as senior center Kayla Will, a reserve on last season's team who scored eight points.

"She's worked hard this summer and at 6-3 is long. She had four or five blocks and ran the floor well," Siska said of Bella Pitta. "She's a good passer at her position. Being able to run three kids out there who are over six foot is beneficial. You saw that on the glass especially as we start to shoot it better. Emily Wollin our freshman point in her first varsity minutes was outstanding, got on the floor for loose balls and was strong with the ball."

Senior point guard Julianna Wagner, who led the team in points and assists a season ago, continues to rehab from spring ACL surgery, hoping to return by mid to late December.

McClain Mahone, a starter at forward last season, transferred in the offseason.

Wollin took a charge in the lane early on, negating a Whippet basket and sending the home bench into a frenzy.

Jade Pitta then scored a pair of baskets and forced a turnover by batting an inbounds pass of a Whitewater player in the fullcourt press. Roughen knocked down a 3 on the ensuing possession to make it 14-6 Lake Mills midway through the first half.

Roughen stepped in the passing lane, coming away with a steal before hitting a floater. Bella Pitta then finished through contact, missing the free throw, and scored on a transition bucket to extend the advantage to 22-12 with under three minutes left.

After a Wollin steal, senior forward Makenna Vesperman had a layin after an offensive board. Roughen's running layup in the waning seconds made it 26-14 at half.

The L-Cats used a 36-9 second half to run away with it, holding Whippet senior Kacie Carollo to 15 points on four made field goals.

"We keyed on shutting her down," Siska said. "Thought we defended her well most of the night. We had a lot of good looks. Our pressure and the amount of bodies we can throw at people are going to be a factor especially with conditioning and the masks.

"We are deep and experienced and have young kids who are able to play. This is the biggest and deepest team we've had the last few years. (Playing without Wagner) in the early going is going to boost the confidence of the rest of the kids and only going to make us better down the road. Proud of how hard our kids played tonight."

Guerrero had all of her points after halftime and Carollo made both of Whitewater's 3s.

Lake Mills is at Westfield on Monday at 7 p.m.