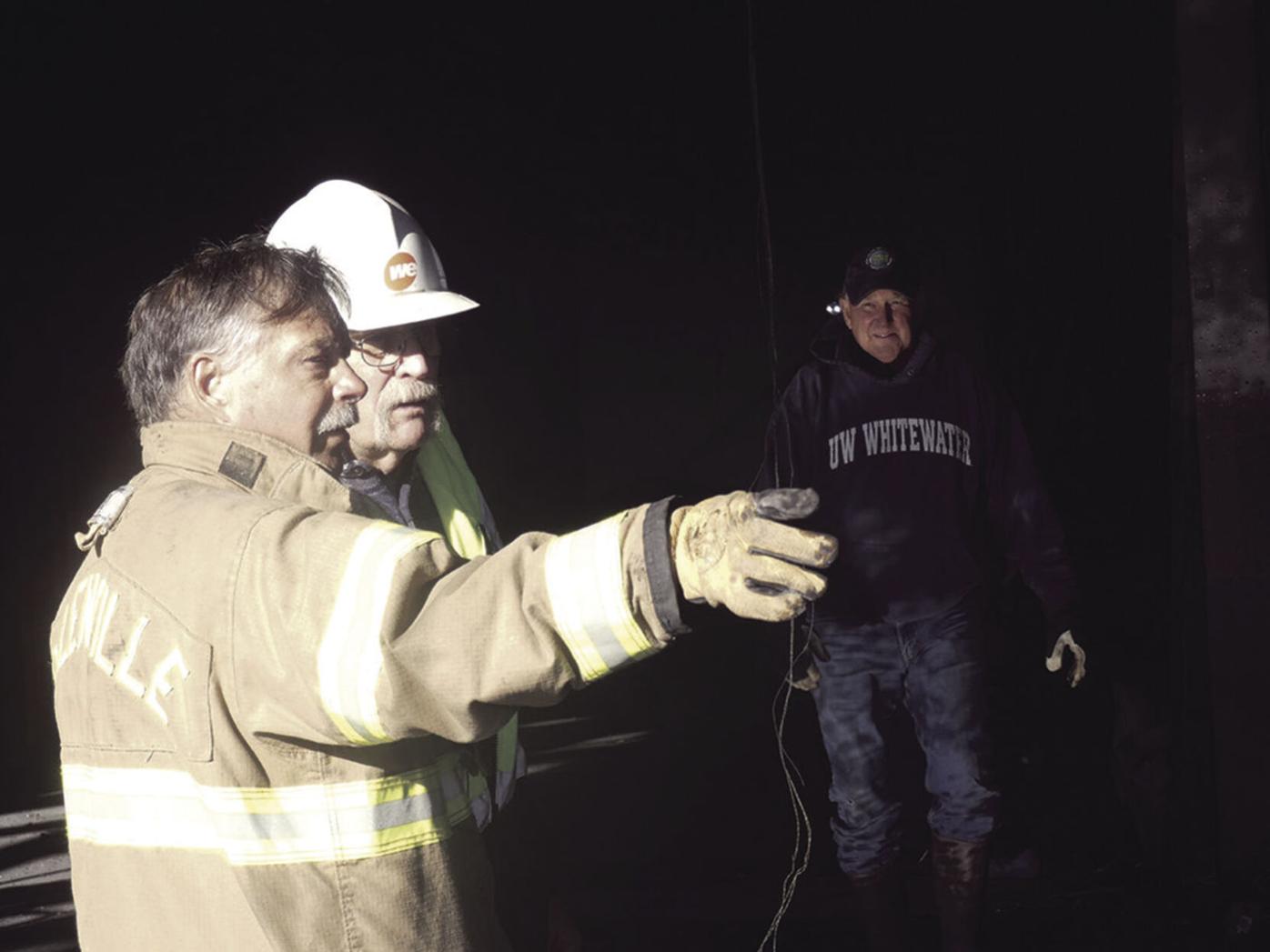 Helenville Fire Chief Ray Madison is shown at the scene after the Helenville business center fire on Christmas of 2019. 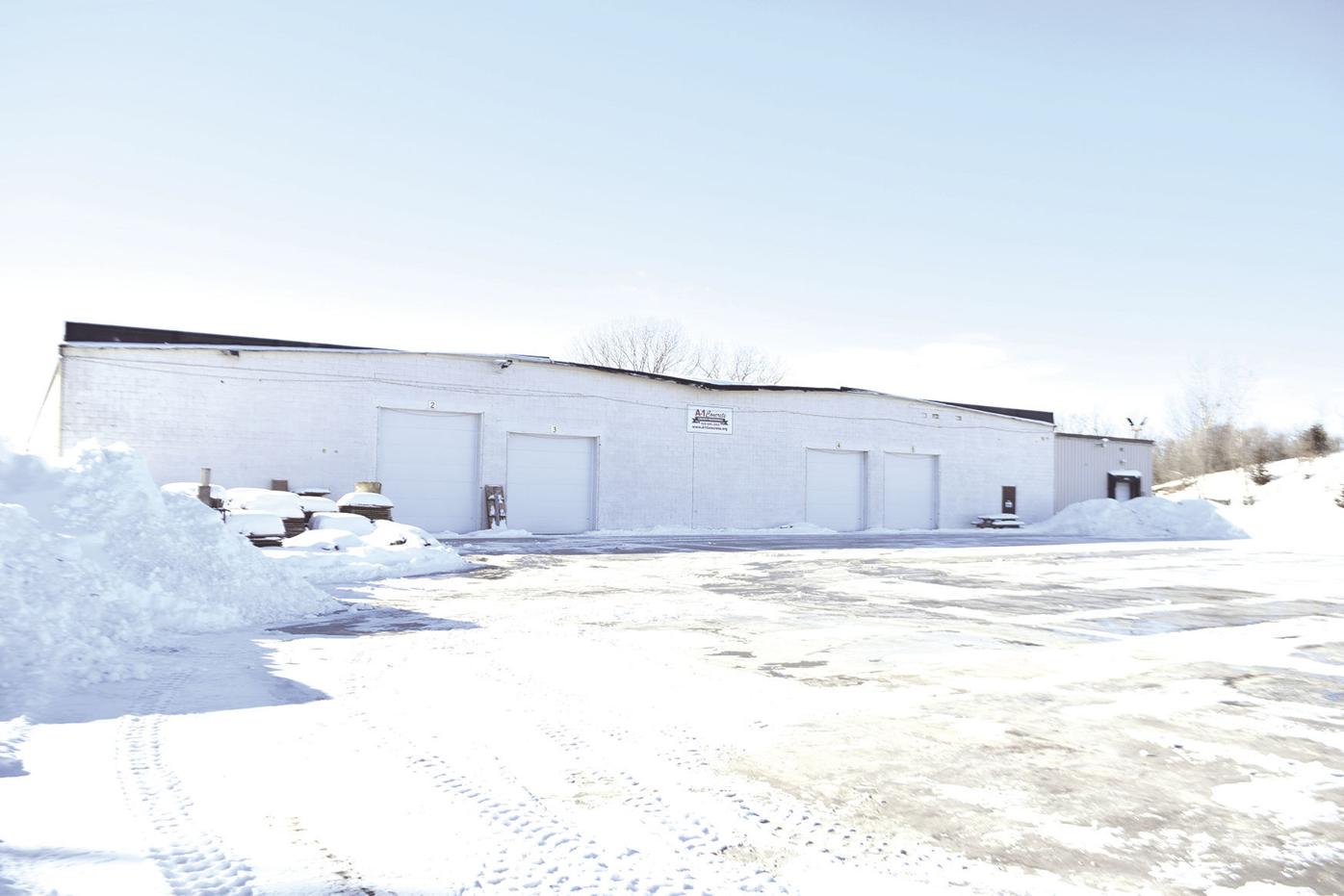 Pictured above is the former Helenville business center as it appears today from County Highway D. The building, as it currently stands, is the one-time rear half of the center. 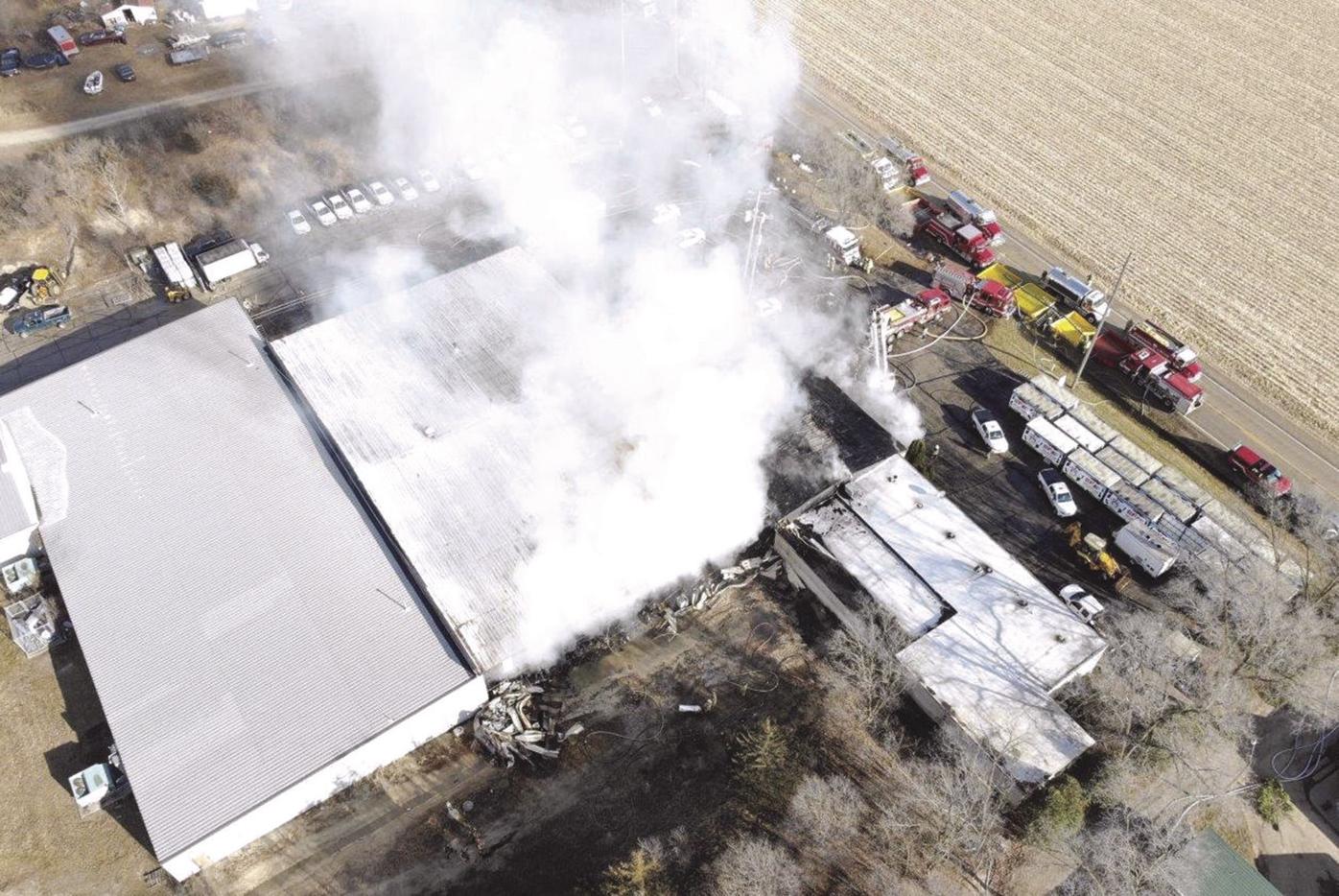 This drone photo, provided by the Jefferson County Sheriff’s Office, shows the Christmas 2019 fire that destroyed the front of the Helenville business center.

Helenville Fire Chief Ray Madison is shown at the scene after the Helenville business center fire on Christmas of 2019.

Pictured above is the former Helenville business center as it appears today from County Highway D. The building, as it currently stands, is the one-time rear half of the center.

This drone photo, provided by the Jefferson County Sheriff’s Office, shows the Christmas 2019 fire that destroyed the front of the Helenville business center.

HELENVILLE — It’s been a little more than a year since a massive fire burned a swath of destruction through a large commercial facility in Helenville, but business vitality at the site has bounced back quickly.

The fire on Christmas Day of 2019 was called by those who fought it the biggest they had encountered.

It broke out at the Highway D Business Development Center at N4525 County Highway D and came close to devastating those involved in enterprises there. The incident ran a shock through the tight-knit, rural Helenville community as 2019 came to a close.

The building was owned by Jefferson business visionary Steve Lewis. Lewis is, perhaps, best known for owning and operating the Jefferson Area Business Center on the east bank of the Rock River in downtown Jefferson.

A large portion of the structure in Helenville still stands today, but the facility will likely never be rebuilt to its original stature that once dominated the rural landscape. The facility is thriving, serving as the relatively new home of A-1 Concrete, formerly of Johnson Creek.

The story of the building in Helenville begins around 1980, when the facility was erected to house Universal Electronics. Following Universal’s relocation to Whitewater, Lewis purchased the structure to house his Winter Woods shop. It was Lewis, as the owner of the complex, and his tenants, who suffered the fire.

“It’s a terrible thing that happened,” Lewis said in late 2019 as he inspected the fire damage. “We’re thankful that it was during the holidays, so nobody was hurt. We’re also thankful to the firefighters and emergency responders who had their holidays interrupted to help us.”

Winter Woods was founded by Lewis in 1976 in Glidden in northern Wisconsin as a Christmas wreath manufacturer. At the time of the fire, Winter Woods had grown into a wholesale distributor of natural goods, including scented pine cones, fireplace products and fireside “essentials.” Lewis had renamed the Helenville facility the Highway D Business Development Center.

Lewis’ products, along with the front half of the business development center just south of Highway 18 near Helenville, were destroyed by the fire that erupted in the early morning hours.

A Daily Times story of the time, stated, “Charred remains of Christmas wreaths and pine cones were spread throughout the burned business center as Lewis and members of the local fire community assessed the damage of the fire.”

Winter Woods continues to operate today at its home base in Glidden.

Helenville’s fire chief of 21 years, Ray Madison, is still not sure what caused the blaze that resulted in approximately $1 million damage.

“The insurance investigators and the state fire marshal were there and they never got anything conclusive, that I am aware of, in terms of how the fire started,” Madison said. “It wasn’t an arson. There was nothing to indicate that.”

Although destruction was heartbreaking to those invested in the building, it could have been much worse, Madison said. A firewall separating the front half from the back half of the building saved most of the businesses housed in the rear, to the west.

The back portion of the original building remains functional and now houses Chris Otto’s A-1 Concrete, along with two other businesses, Northwest Services and Bennett Repair, both owned by Ron Bennett who rents space from Otto. There are currently 32,000 square feet remaining of the original 61,000. The former front portion of the structure has been cleared away and is now a parking lot.

Madison called the blaze the biggest he has ever fought.

Two firefighters were injured battling it, but neither of the injuries was life-threatening.

Madison recalled that the Christmas Day of the fire was not a bad winter day, weather-wise. He said temperatures were in the 30s and the holiday, rather than being a hindrance to fighting such a large fire, was likely an advantage.

“It probably worked in our favor, because everybody was home from work and most were available to take the fire call,” he said, adding that, at that point, there were about 25 firefighters on the Helenville Fire Department staff and turnout for the incident was about 70%.

The contents of the building were quite flammable, Madison recalled. One section was filled with leftover natural tree materials for making Christmas wreaths and although it was a literal “tinderbox,” it contained few, if any, hazardous materials, such as chemicals.

Firefighters from departments around the area were at the scene from the 6 a.m. alarm until it was cleared at approximately 3:30 p.m.

The veteran fire chief said the major incident was a learning experience, as is every fire.

“Every fire teaches you something,” the chief said. “I picked up a few ‘do’s and don’ts.’ I learned that we always have to be better at preparations. We had a map of the interior of the building, but we wished that it would have been more updated.”

Madison said he learned that Helenville’s mutual aid is reliable and he is appreciative, to this day, for the help he received from area fire departments.

“Mutual aid worked out pretty well and worked like it was supposed to,” Madison said. “The personnel that were needed got there.”

Madison said one of the most important lessons he took from the fire was that a fire department must always do all it can to preserve debris that is removed from a building that has burned.

“This is always easier said than done,” he said. “That was a huge building and we are a small department, so it was very challenging.”

Now, what’s left of the old building has new life.

Otto, of Johnson Creek, has been owner of A-1 Concrete since its founding in 1996.

He has seen his business grow considerably over the years and was in the market for a large building close to home that was zoned for a concrete company. He said he didn’t want to locate in an urban business park, where there are sometimes more restrictions.

Otto said he had known of the Helenville property for years and had been impressed with the size of the facility, as well as its location.

Otto got in contact with Lewis, who was amenable to selling the property after the fire and a deal was struck almost immediately. By April of 2020, A-1 was in Helenville.

“I thought the place was unique years and years ago,” Otto said, “because it was such a big factory in the middle of nowhere and now I own it.”

A-1 Concrete, with its 14 employees, utilizes a remodeled 15,000 square feet and Otto called his company’s new digs, “fantastic.”

“To have a heated shop is unbelievable,” he said, adding the location, with access to Highway 18, Highway 26 and Interstate 94 is perfect.

“We do a lot of work — both residential and commercial — in Milwaukee and Madison, as well as locally,” he said, “and this new location is phenomenal, because it gives us reach in every direction. You can do anything from there and we are not in a business park. We had looked at Lake Mills, but in Helenville we are out of town, so we don’t have to deal with city noise ordinances, aesthetics on fencing and things like that. There is more flexibility, from my perspective.”