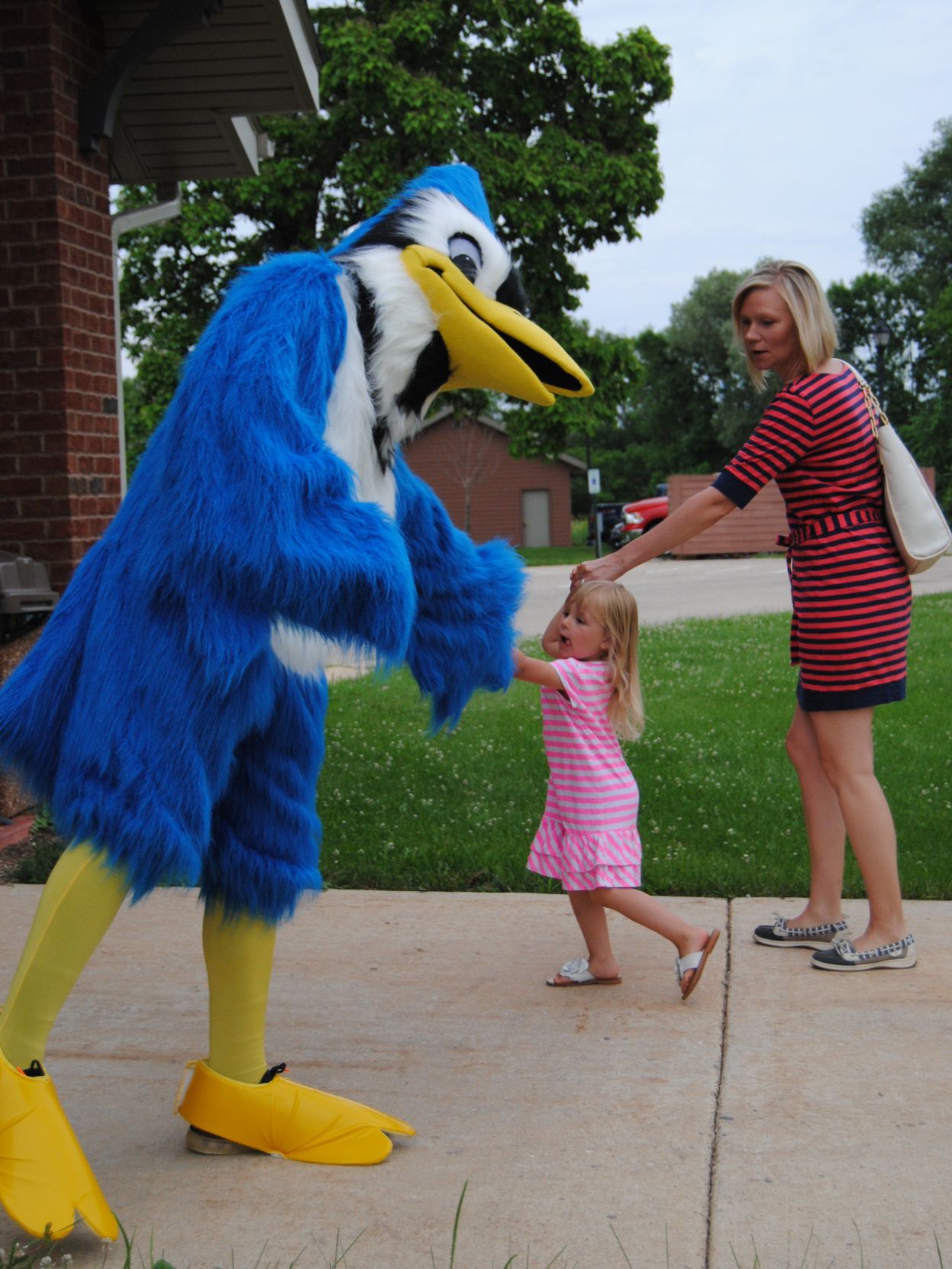 The Johnson Creek Blue Jay mascot greeted visitors to the Johnson Creek Community Center on Wednesday night during the athletic field kickoff event. The Blue Jay is pictured as Elisabeth Guld gives him five, while mom, Melissa, looks on.

Pictured is a rendering of what the Johnson Creek Athletic fields will look like with the new grade five-12 school in the background. The "One Team, One Dream" campaign kick-off was held Wednesday night. Over $600,000 has already been raised toward the $2.5 million goal to build the athletic fields.

The Johnson Creek Blue Jay mascot greeted visitors to the Johnson Creek Community Center on Wednesday night during the athletic field kickoff event. The Blue Jay is pictured as Elisabeth Guld gives him five, while mom, Melissa, looks on.

Pictured is a rendering of what the Johnson Creek Athletic fields will look like with the new grade five-12 school in the background. The "One Team, One Dream" campaign kick-off was held Wednesday night. Over $600,000 has already been raised toward the $2.5 million goal to build the athletic fields.

JOHNSON CREEK -- The Johnson Creek School District is one step closer to its $2.5 million goal of building new athletic facilities at the district's new school after a $500,000 donation from James and Jordan Glover, owners of Pine Cone Travel Plaza in Johnson Creek.

The donation was announced at a kickoff event Wednesday night at the Johnson Creek Community Center.

James Glover said they like to help with causes for young people around the community, "I just think to help the village and help the young people. We've always been interested in sponsoring baseball teams and girls softball. I just think it's good for the kids."

In April of 2014, the Johnson Creek School District passed an $18.9 million referendum to build a new school for grades five-12.

In order to reduce the cost of the referendum for taxpayers, the school board made the decision to remove funding for the athletic fields project from the referendum. Instead, the $2.5 million needed for the project will be collected through donations and the sale of naming rights to area businesses.

Glover and his wife, Jordan, and daughters Crystalyn and Cathryn Glover, and Josh Bartz, general manager of the Pine Cone Restaurant were present to announce the donation.

The athletic facilities include a football field, track, baseball and softball diamond, gymnasium and fitness center.

According to the district's website, "These facilities will provide a place for all physical education students to learn about the importance of physical health and a place for the marching band to practice. They'll also serve as a community center, where the people of Johnson Creek can come together and enjoy each other."

In order to achieve their goal district staff and community members have banded together to start the "One Team, One Dream" committee in order to raise the necessary funds.

Lyle Wuestenberg, of J&L Tire, honorary chairman, said, "I am very excited to be here tonight. I'm excited for the students who will be attending our new school. It is a great honor for me to be a part of the 'One Team One Dream' campaign.

"Today we are only a year away, in the fall of 2016 we are going to have one very cool school. We have some work to do. Please help us and support us. Johnson Creek's athletic dream will only be a success with strong committed community involvement. Please join our team and help us finish the dream," he said.

It was also announced at the event another $100,000 was donated to the project by another donor to be named later. So far the total funds raised are about $612,000.

With new athletic facilities and a new school Johnson Creek officials expect more visitors than ever to the community for tournaments and invitationals, which will make the naming rights to the new facilities a good marketing option for area businesses, according to the district website.

The football stadium, track, bleachers and press box as well as the gymnasium baseball diamond, fitness facility and weight room and the wrestling room will all have options for naming rights. Other sponsorships are also available. The committee says it will recognize donations starting at the $25 mark, but even the smallest donation is important, committee members said at the event.

The committee is also looking for volunteers to help with the effort. Upcoming events include the Run for the Fields in October and a gala event in February.

"We are already a quarter of the way there. It's all downhill from here, we've got it," said Tim LaSage, committee member. "One team, one dream, you are the team, the dream is right in front of us. Let's get it."

For more information on donating to the "One Team, One Dream" campaign, go to jconeteamonedream.com.