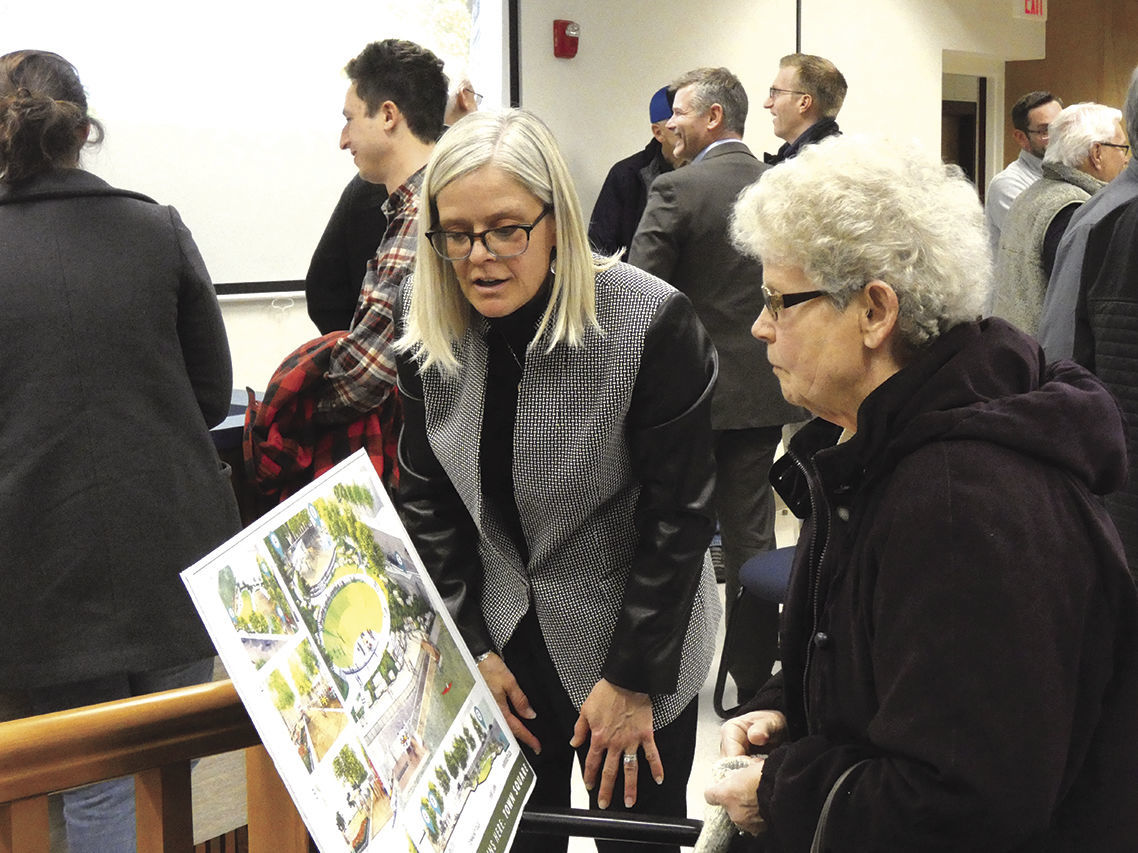 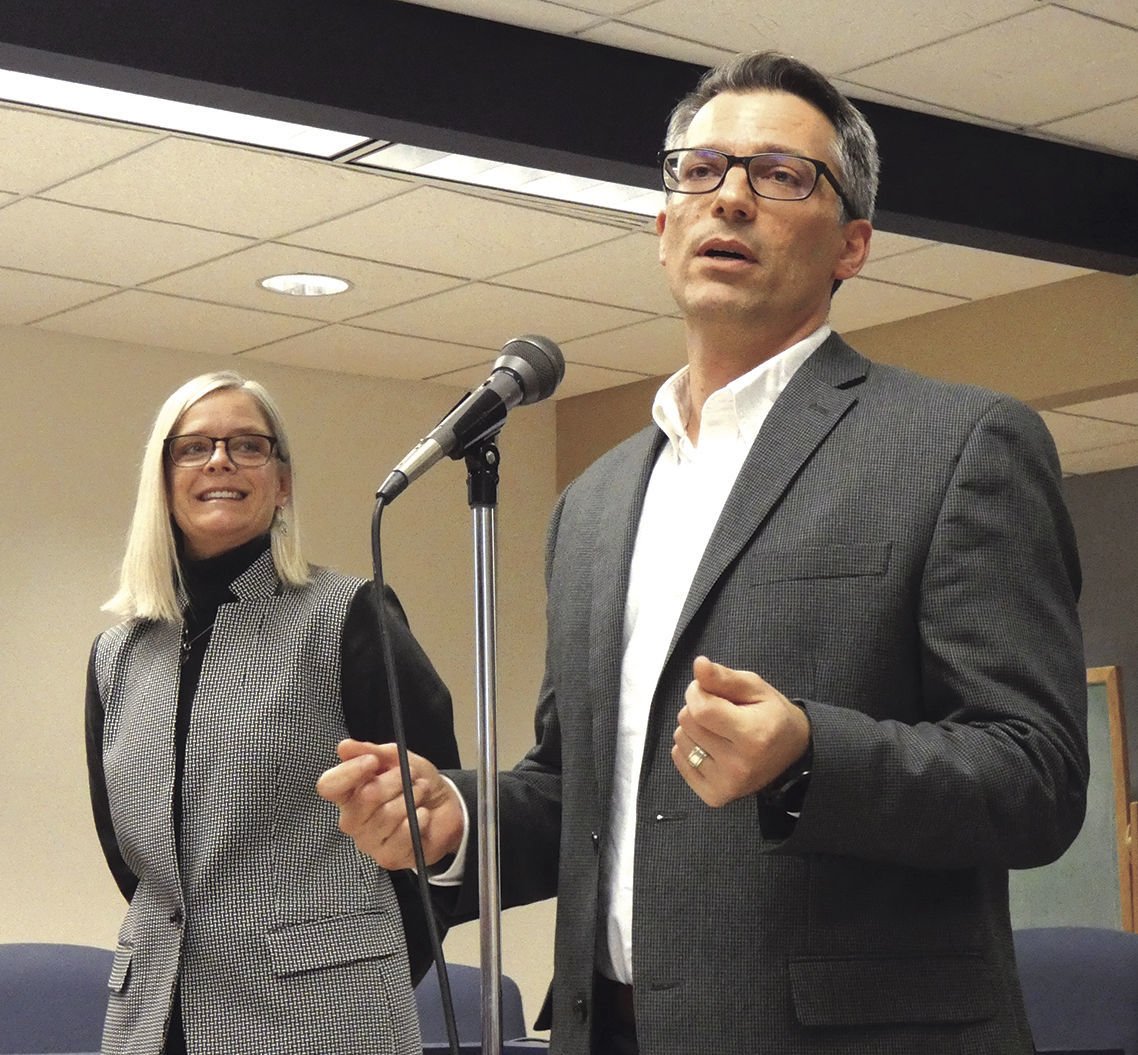 The excitement for the new design of the Town Square was apparent long before the unveiling was scheduled to begin in the council chambers of City Hall Wednesday.

A contingent of city leaders, community members and citizens filed into the space with such numbers that city hall staff members had to grab additional seats from a nearby meeting room to accommodate the seating deficit. Even then, the crowd of over 80 people still leaked out into the hallways, peering into the chambers from open doors at each end of the room to catch a glimpse of the design for the Main Street attraction.

The enthusiasm did not dissipate during the meeting either, as citizens seemed to enjoy the proposed design for the space.

“I think you did a beautiful job. I am happy I moved back here,” said Watertown resident Ron Froemming, who returned to the area after a 76-year absence.

The meeting began with Redevelopment Authority Executive Director Kristen Fish-Peterson introducing SmithGroup Urban Designer Tom Rogers, who was charged with leading the design of the project. Rogers then walked the crowd through the design and how it came to fruition.

The design follows an idea dubbed “confluence” by the group, where a path runs through the four main areas of the square: a library plaza, the town square plaza, an event lawn and stage and the riverside plaza. The idea behind the design would be to engage both Main Street, Water Street and the river while also being able to work in concert with the library expansion, the new Main Street bridge to be constructed by the state Department of Transportation in 2026 and perhaps a future riverwalk.

Rogers also explained some of the features of the design which will include a curbless Water Street which could be redesigned using pavers, though that decision hasn’t been made yet. Rogers explained the road would still be able accommodate vehicles on regular days with slower traffic for a more pedestrian-oriented environment, or could be closed off to create an extended plaza for events on certain days.

Rogers also explained the potential for a splash pad (water playgroud) in the plaza, which could be turned on and off depending on the space needed for events. Rogers explained that during the group’s research they found that water helps to animate the space in a way other features can’t.

“In public places you find water. It attracts and brings people in,” Rogers said. “(Water) is a critical part of having people come.”

Other features included a shaded seating area, a pier for kayaking and canoe launches and community tables. Rogers also discussed the possibility of future development to the south of the square, though there are no affirmative plans for the space have been made according to District 2 Alderman Rick Tortomasi.

Rogers said that although the space can be used for events, its ability to be used year-round as an every day space is it’s greatest draw.

“This space will make (special) days work, but it can make every day work, too,” Rogers said.

In discussing the funds for the square, the RDA said they will try to split the projected cost of between $2.8 million and $3.8 million three ways. The funding would be split between three sources, grants and donations, the RDA and the city. Rogers also reiterated that the goal for the completion of the Town Square is fall of 2021.

Following the presentation, Rogers opened the floor to questions where many citizens asked about items from lighting for the space, stormwater plans for the area and how to the river plaza can be utilized by water crafts.

Most of the questions centered around the idea of safety. Questions arose about the park’s hours, fencing near the splash areas for children’s safety and two-wheel traffic. Rogers said although fencing would not be around the splash area, there would be deterrents such as flower beds and other items to keep children from running into the streets. Two-wheel traffic would be accommodated on Water Street with the slowing of the speed limit and Mayor Emily McFarland chimed in on the park’s hours saying they would likely match the current 11 p.m. closure time of other city parks.

Upon the completion of the Q & A session, the audience gave Rogers a round of applause. Guests then could get up and look closer at the designs posted at the front of the room.

Project leaders seemed satisfied with the presentation and excited about the community support.

“It was great to see so many people. We had a great dialogue with a lot of questions which all were good,” Fish-Peterson said. “Everyone I talked to at the boards after(ward) thought it was great....I’m excited people can see the vision created for that lot.”

Dave Zimmermann, who headed the RDA’s steering committee for the project, was equally pleased with the turnout of the event and loved the concept presented.

“Just knowing what’s been there and now seeing a softened green space and community gathering spot, it’s all I could ask for, really. (A place) bringing ideas and people together,” Zimmermann said.

Rogers said he thought the meeting went really well and thought the turnout for the event was excellent.

“I’m so glad so many people came out and of all the positive responses we received from the public,” Rogers said.

He said the crowd brought up some pertinent issues and the next step for the group will be to consider those concerns and to work with the RDA on design development and processing as well as fundraising.

Questions included how parking for large events would be accommodated, how would the park work towards being compliant for stormwater, how the event lawn’s “bowl” structure will be drained and others about further development and the redevelopment of the Main Street bridge and Main Street itself.

Fish-Peterson said although there is some relief following the unveiling, there is a long process still to go.

“(We have) a lot of work to do. Fundraising, finalizing construction documents, (we) have to oversee the construction and we can’t start until the demolition is done and that still takes time,” Fish-Peterson said. “I’m relieved and excited there is a vision for the block the community can hang onto and look forward to.”