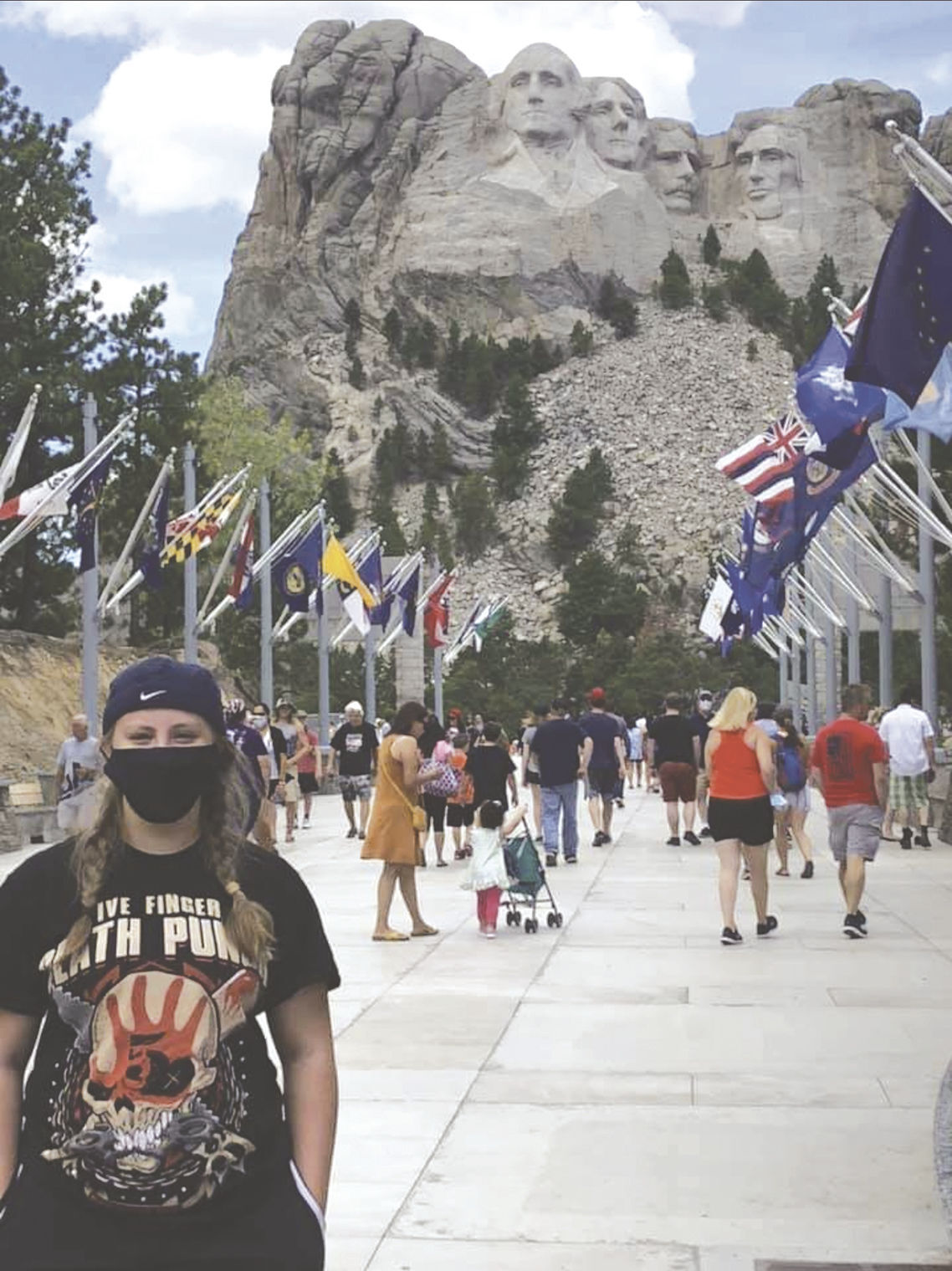 With her mask on, Ava Finger visited Mount Rushmore in the days before her life-changing mountain-biking accident. 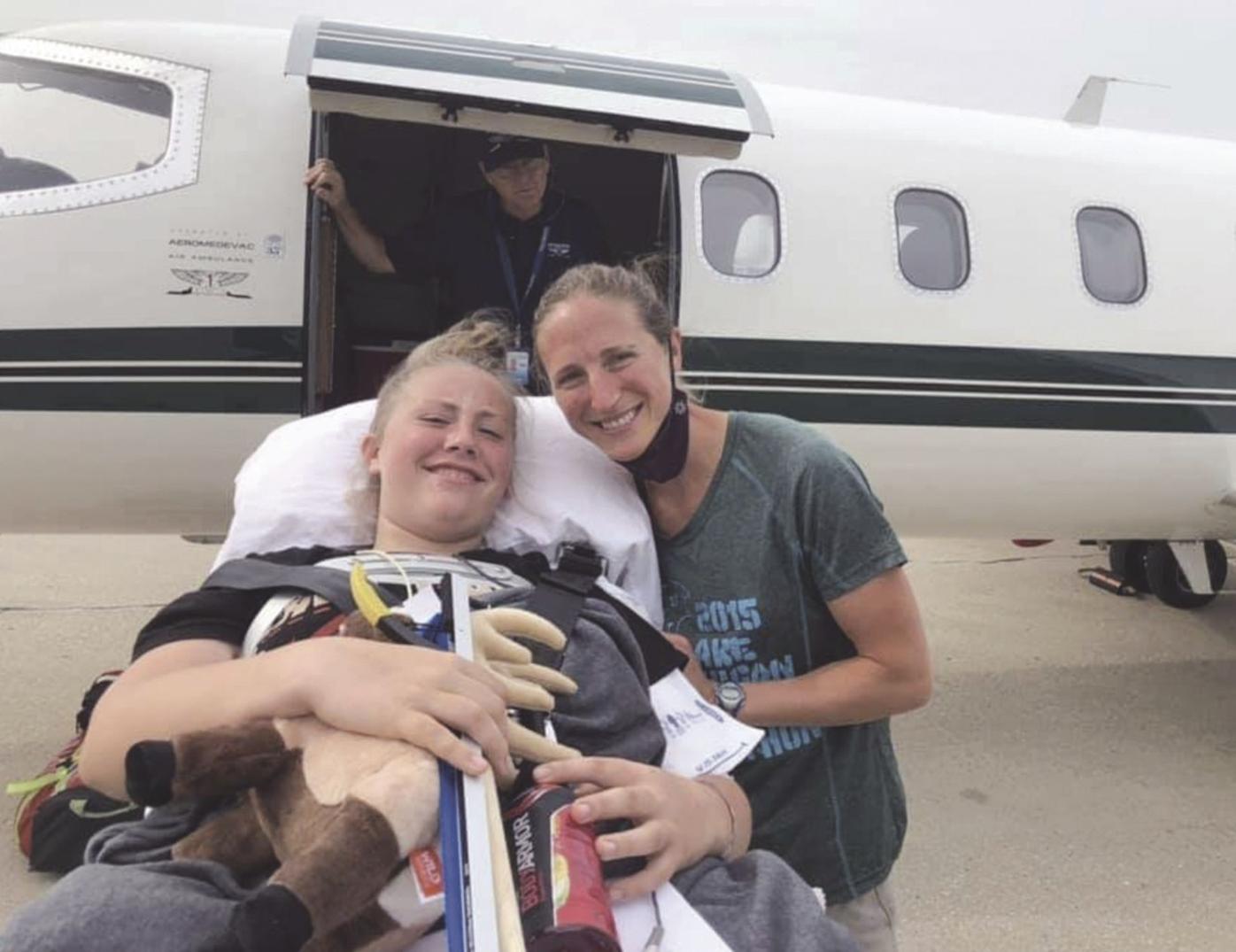 With her mask on, Ava Finger visited Mount Rushmore in the days before her life-changing mountain-biking accident.

CLYMAN — A tenacious Clyman-area girl, with a strong background in athletics, is already making strides toward at least semi-recovery from paralysis she sustained in a mountain-biking accident while on a recent trip out West.

Laurel Finger of Clyman is the grandmother of Ava Finger, a successful 14-year-old, eighth-grade student and athlete at Dodgeland Middle School. At times, through tears, Laurel described the mountain-biking accident her granddaughter suffered in the hills of Wyoming in late August. The crash took the teen’s ability to feel, or move, from the chest down. Ava’s arms remain functional.

On Aug. 20, Ava was riding a mountain bike near Jackson, Wyoming and was following on a path behind her brother, Evan. Her mother, Janelle, was third in line. Laurel said Ava felt she was getting too close to the rear wheel of her brother’s bike, so she turned off on another path, but this route turned out to be more challenging. Ava went over an embankment, falling several feet, her body twisting. When the fall ended, her bicycle helmet was virtually destroyed. She had shattered her eighth vertebrae and incurred damage to the seventh and ninth. This caused the paralysis. Ava had also broken ribs and there were lacerations to her face.

“They had gone out the week before, just on the typical trip out West in the summer. They went to Mount Rushmore and they did a fossil dig, did some hiking, biking and kayaking,” Laurel said, adding they also visited family in Wyoming.

Of Ava’s crash, Laurel said it could have been worse.

“When my son showed me the helmet she was wearing,” Laurel said, “it was so damaged that he said, ‘Without it, she would be dead.’”

Ava was transported to St. John’s Health in Jackson, where spine surgeons performed a 6-hour surgery to stabilize fractures of her three damaged thoracic vertebrae using rods and screws.

“Ava has not had feeling below her chest since the accident and doctors are not optimistic about her regaining nerve sensation or function at this time,” the family said in a statement.

Laurel said that, prior to the accident, her granddaughter had been a very good wrestler. She earned trips to the state meet twice. She also played volleyball, soccer, ran the 100-yard dash, put the shot and hurled the discus. Ava was the Juneau Victorians’ 4-H Dairy Princess in 2019, along with solid participation in that youth organization.

“She’s been wrestling since kindergarten,” Laurel said, citing a family history in the sport on her dad, Jeremy’s, side. “She had hoped to get a wrestling scholarship.”

Laurel said Ava and her family were lucky to have gotten the surgeon at the hospital in Wyoming that they did. She said the man was retired from surgery in the military, overseas, where he had worked on people who had been hit by roadside bombs.

“He did a good job on her,” Laurel said, “but she will never walk again without an absolute miracle.”

In recent days, Ava endured an ambulance trip from the hospital to the airport in Jackson, where she took what Laurel described as “the most expensive private medical transport flight ever” to Midway Airport in Chicago. There, she was placed in another ambulance and taken to the Shirley Ryan AbilityLab on Chicago’s downtown lakefront, where she is currently being treated.

“They will be looking at stem-cell options,” Laurel said. “She is in the best place in the country.”

A check with the Shirley Ryan AbilityLab’s website confirmed it is the No. 1 referral choice for spinal cord injury patients from around the world.

“We are renowned for innovative, interdisciplinary rehabilitation care,” the site stated. “By integrating advances in research and technology, we continuously enhance medical and functional outcomes.”

Dr. David Chen is director of the lab’s Spinal Cord Injury Rehabilitation Program. He gave hope to people like Ava, saying, “Innovations in neuroscience and technology have led to outcomes once thought impossible for spinal cord injury patients.”

In keeping with that optimistic view, Ava is scheduled to take part Saturday in wheelchair volleyball at the rehabilitation center.

Laurel said her family has been through some tough times lately and have been attending several funerals, including that of her father. She said, however, that not even the death of her dad could match the pain she is feeling over the paralysis of her granddaughter. She said grandmothers and granddaughters have a special bond.

“Compared to this, my dad dying was a piece of cake,” she said with a weak laugh. “My granddaughter has a lot more years and a lot of things we can’t do now — or they will be done very differently.”

Laurel said she talks to Ava through on-line chats, but that doesn’t quite cut it.

“Talking over a computer cannot take the place of a hug,” she said.

Laurel said Ava will likely be a resident of the Chicago recovery center for the next two months, but may stay there up to six months.

“You stay as long as you are progressing,” she said, “and with her tenacity, she should be there a long time. She may not be back until March, but I have accepted that. If she is progressing, I’m happy with that.”

“I think she is doing remarkably well, due, in part, to my son, because he had to be strong, too. He was recently impaled on Rebar at work,” Laurel said. “He gave his daughter some pep talks that some people might have thought were mean, but he wants the best for her.”

“She’s feisty,” she said. “She is still like that. She’s not at a point where she is angry, because she has been working hard and she is assigned to a psychiatrist and will be getting therapy that way, too.”

Despite being in Chicago, Ava will start school around the same time as her friends at Dodgeland.

“Her brother is picking up her I-Pad and my son is taking it down to her (this weekend). Then she will start her virtual classes on Monday,” Laurel said

The medical transport jet flight alone cost approximately $350,000. Ava’s parents’ insurance will pay for some of it. The Fingers are worried, however, that it won’t take long before they reach the lifetime maximum payout on insurance. She said the word “bankruptcy,” in light of astronomical future medical bills, has already been uttered.

For information on how to help the Finger family with some of the costs of Ava’s treatment, visit their GoFundMe page and type in “AVAstrong.” A check with the site Thursday revealed that 482 donors had contributed $48,325 toward the goal of $50,000.

Laurel said she will miss her granddaughter terribly during one of their favorite holidays — Halloween — not to mention Thanksgiving and Christmas. She said the COVID 19 pandemic and its travel and other restrictions make things that much more challenging than they would be been a year ago.

“Not being able to see one of the complete loves of your life is the hardest part,” she said. “You can see her on video chat, but it’s not anything like hugging her.”