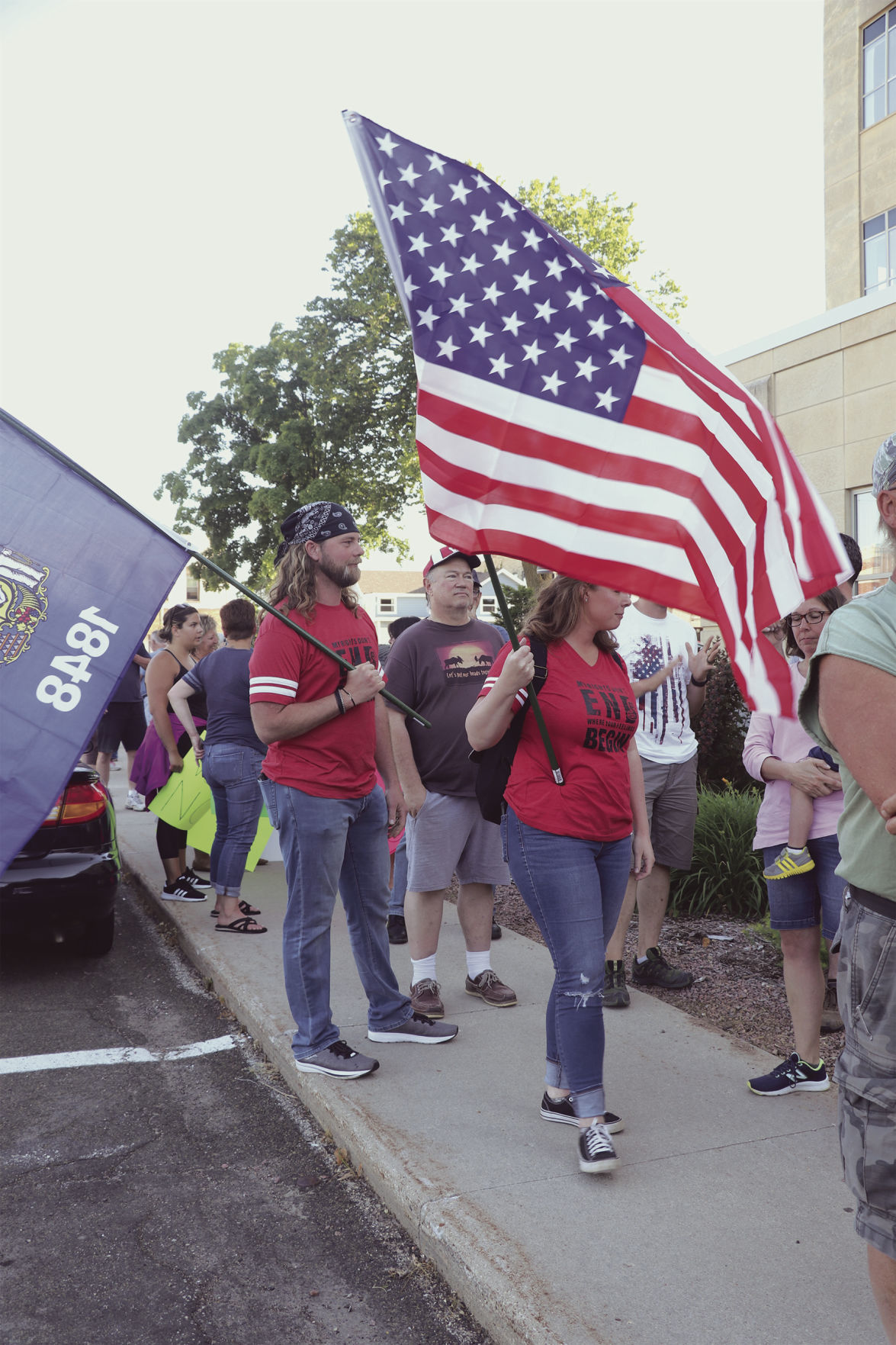 Nathan and Ashley Siegmann (foregorund) stand Tuesday with other protesters outside of the Dodge County Administration Building. The demonstrators were protesting against an ordinance that would have set clearer guidelines for health officials when combating communicable diseases. 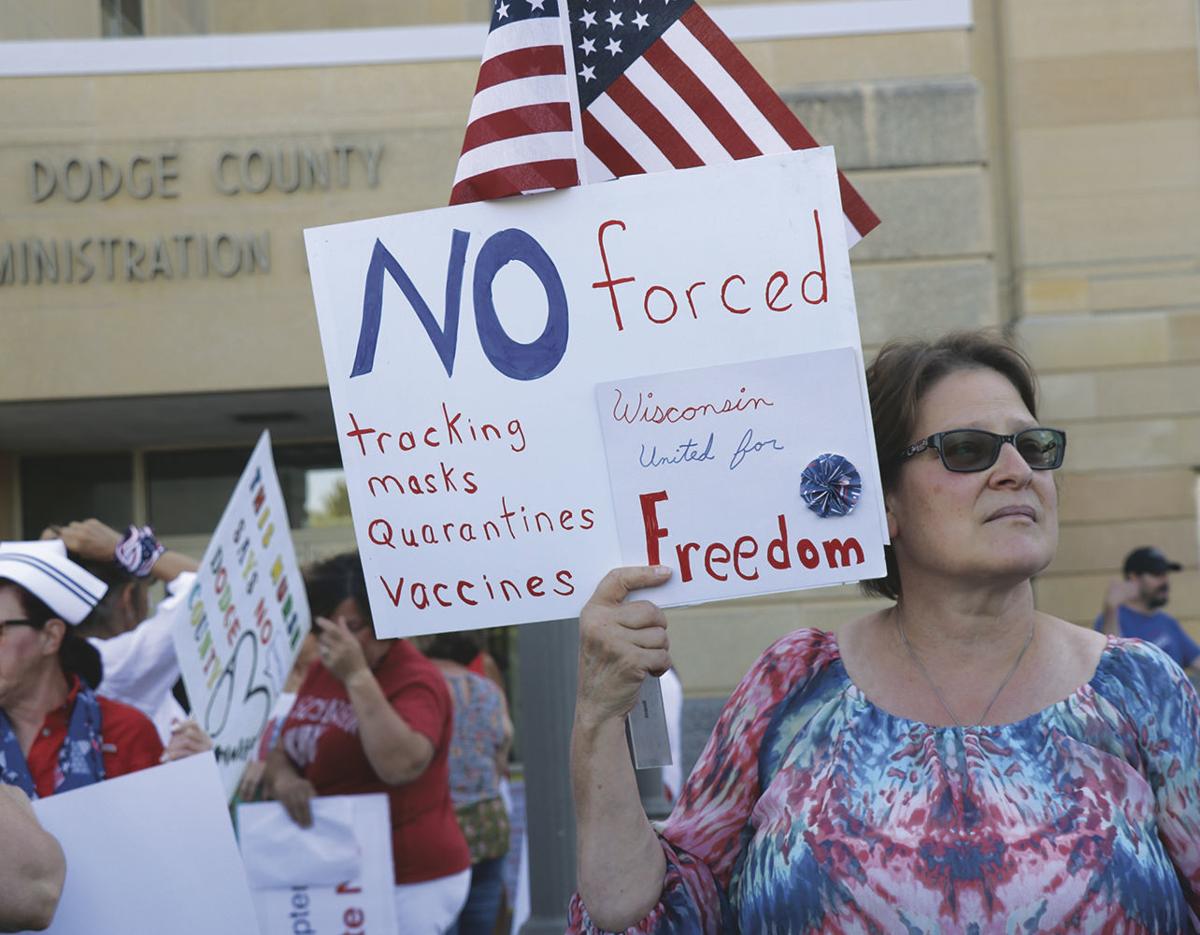 Patricia Kriewald of Iron Ridge made the trek to Juneau to protest a health ordinance before the county board Tuesday. It was estimated that nearly 270 people demonstrated in Juneau. 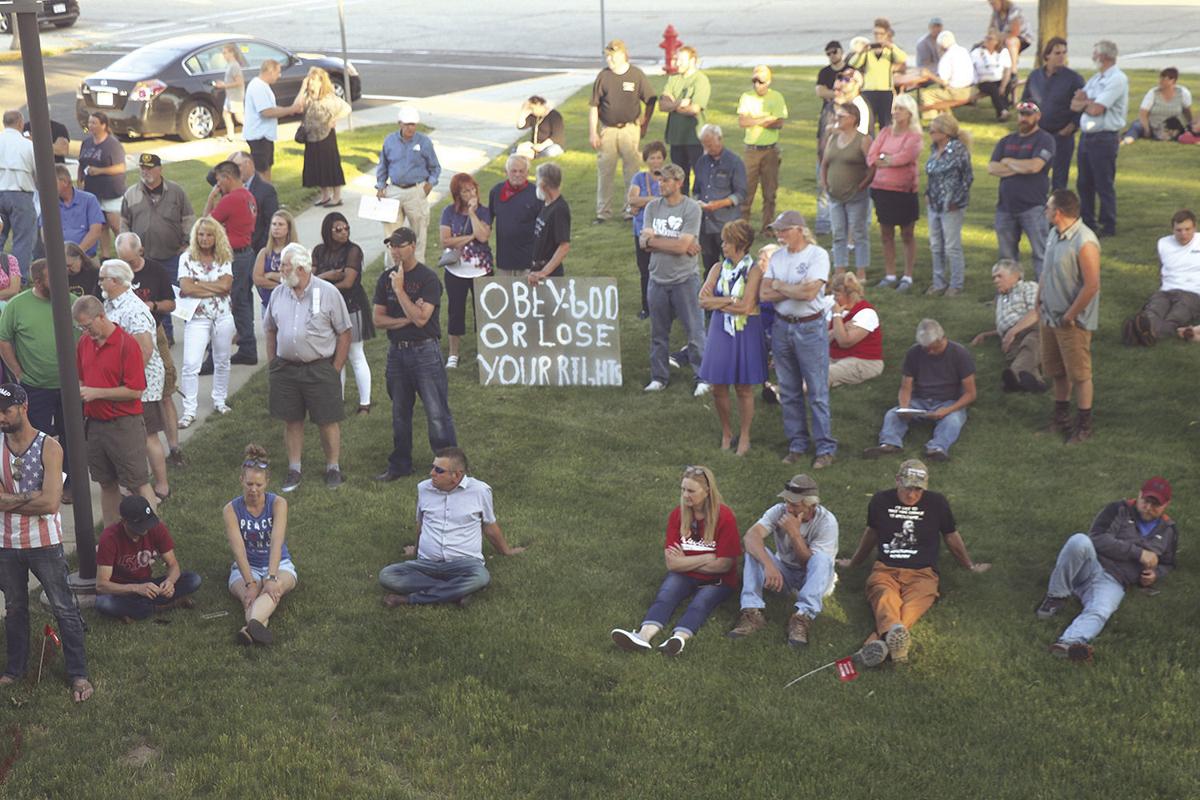 Taken from a second floor window of the administration building an overflow of protesters can be seen. 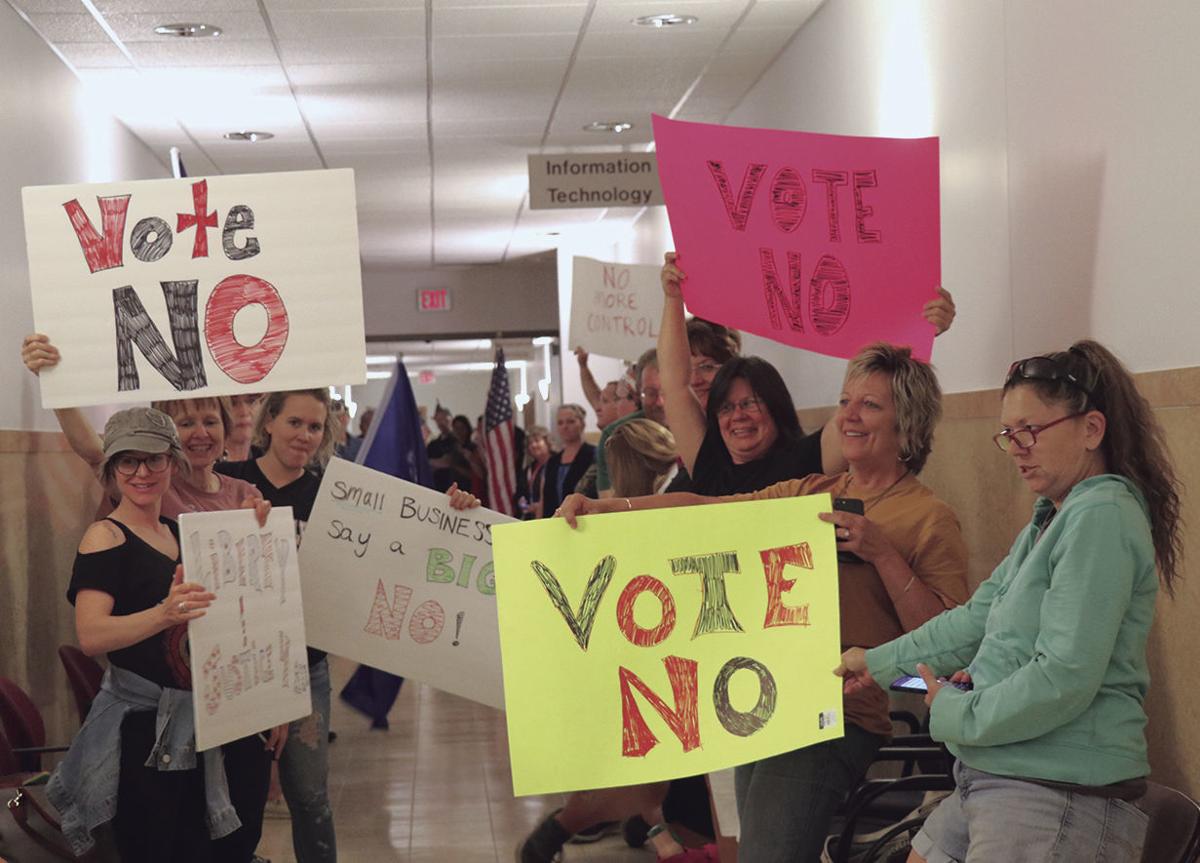 Nathan and Ashley Siegmann (foregorund) stand Tuesday with other protesters outside of the Dodge County Administration Building. The demonstrators were protesting against an ordinance that would have set clearer guidelines for health officials when combating communicable diseases.

Patricia Kriewald of Iron Ridge made the trek to Juneau to protest a health ordinance before the county board Tuesday. It was estimated that nearly 270 people demonstrated in Juneau.

Taken from a second floor window of the administration building an overflow of protesters can be seen.

JUNEAU — Ashley Siegmann waved her U.S. flag as she stood in solidarity Tuesday evening with her husband, Nathan, and nearly 270 other demonstrators at the Dodge County Administration Building opposing an ordinance that would have set clearer guidelines for health officials when combating communicable diseases.

“I would like to be responsible for my own health,” the Rubicon woman said. “I don’t want anyone making decisions about me and my health.”

“I don’t want my rights taken away by one person in this county,” he said holding a state flag of Wisconsin.

The crowd of Dodge County citizens lined the outdoor entrance to the administration building yelling, “Vote No!” to passing county supervisors trying to enter the building before Tuesday’s board meeting.

Much of the public outcry began when the Wisconsin Supreme Court ruled that Health Secretary-designee Andrea Palm’s safer-at-home order was unlawful, many counties began reviewing their own ordinances to determine whether there was a basis for local orders. Dodge County discovered, like many other counties, that they did not have an ordinance governing public health matters or diseases; instead relying on state statutes.

In the weeks that followed, Dodge County officials began drafting an ordinance that would give their public health officer distinct procedures and developed parameters should a localized order be needed.

The purpose of the ordinance is to describe the duties and authorities of the local health officer, prevent communicable diseases and their spread, prevent public health nuisances and human health hazards, prevent food and waterborne illnesses and infections and their spread, and also provide for the administration and enforcement for any violations that may occur.

The ordinance draft provoked a community backlash with concerns over constitutional overreach.

One of the protest’s organizers, Dan Siegmann, Nathan’s father, took his concerns to his son’s Facebook page, where he posted an 8 minute and 39 second video speaking against the draft of the ordinance.

“As we all know, the Constitution protects us from our government if it becomes a bit rogue. It protects our rights and freedoms,” Siegmann said, while holding the ordinance draft in the video post. “We’re very familiar with the lock down by the Evers’ administration and there were a lot of rights violations that happened at that point and time. I believe what we experienced then is going to be considered minor compared to what we would experience if this is passed.”

While standing with the other protestors Tuesday, the elder Siegmann said change has to start at the local level.

“This proposed ordinance would give a giant set of teeth and claws to the health director,” he said. “Whenever she believes there is a problem in the county, she can hire as many people as she wants to make sure people are quarantined in their homes. This proposed ordinance goes too far and it came about too fast. That’s why we’re here. This violates our God-given rights as American citizens.”

When the meeting began, many of the demonstrators filled the first floor auditorium and cheered and applauded those county supervisors who made comments opposed to the ordinance. While an overflow of demonstrators sat on the second floor of the administration building, others congregated outside on the lawn.

The Dodge County Board decided to postpone any action on a health and welfare ordinance Tuesday night. A draft of Chapter 11 ordinance — Health and Welfare, which was up for discussion only. Its purpose is to outline the process for Public Health Office procedures, the issuance of health orders and the methods to enforce them.

Dodge County Corporation Counsel Kim Nass, who penned the ordinance, said it was only a draft.

She also said the ordinance is not “COVID-specific,” but it’s about all communicable diseases. Nass added that the draft has a procedure for issuance.

“Any order that may be written by the public health officer would need to be countersigned by the county board chair and then ratified by this body,” she said.

County board supervisor David Guckenberger of Ashippun kicked off the hour-long debate on the draft of the Chapter 11 ordinance.

Supervisor Lisa Derr said the public health officer has the power to issue orders, according to Wisconsin statutes. That office can require by the county to pay for enforcement by whatever means necessary. She urged her fellow board members to approve an ordinance to allow the county greater control over those processes and procedures.

Derr said that any order the public health officer would give would have to be specific.

“She just can’t do willy-nilly. She has to have a specific reason, define a rationale and make specific factual findings related to the order,” Derr said. “It has to be limited in duration to address the disease. That’s one of the big factors of why the state Supreme Court struck down the Safer-at-Home order because there was no end in sight — uncontrolled power. That is what people are upset with. That’s what people think this ordinance is doing, but it’s doing just the opposite.”

Several supervisors questioned if adopting an ordinance would have even changed the county’s response to the COVID-19 pandemic while others felt the cause did not justify the means. Most of the discussions turned out to be a moot point as the county learned June 11 the Wisconsin Counties Association established a committee to begin work on a statewide county-level health ordinance.

Dodge County Board Chairman Russell Kottke said after Tuesday’s meeting it is no guarantee the WCA committee will actually write an ordinance. However, he said the county has postponed working on its own to wait and see what the state committee ends up doing. He said July and even August may be too soon before the county board sees anything from the WCA.

Your “right” to make your own health decisions can take away my right to stay healthy and stay alive. It seems as though this protest grp doesn’t get how this virus works. You can be asymptomatic yet be able to pass the virus to unknowing victims. If they die from your negligence that’s akin to murder. Get real, look at the facts. Countries like New Zealand had great success because their citizens thought of other citizens and not their selfish wants. They are virtually Covid free. The thought process of this protest grp will keep us from living they way we did pre-Covid. Grow up.