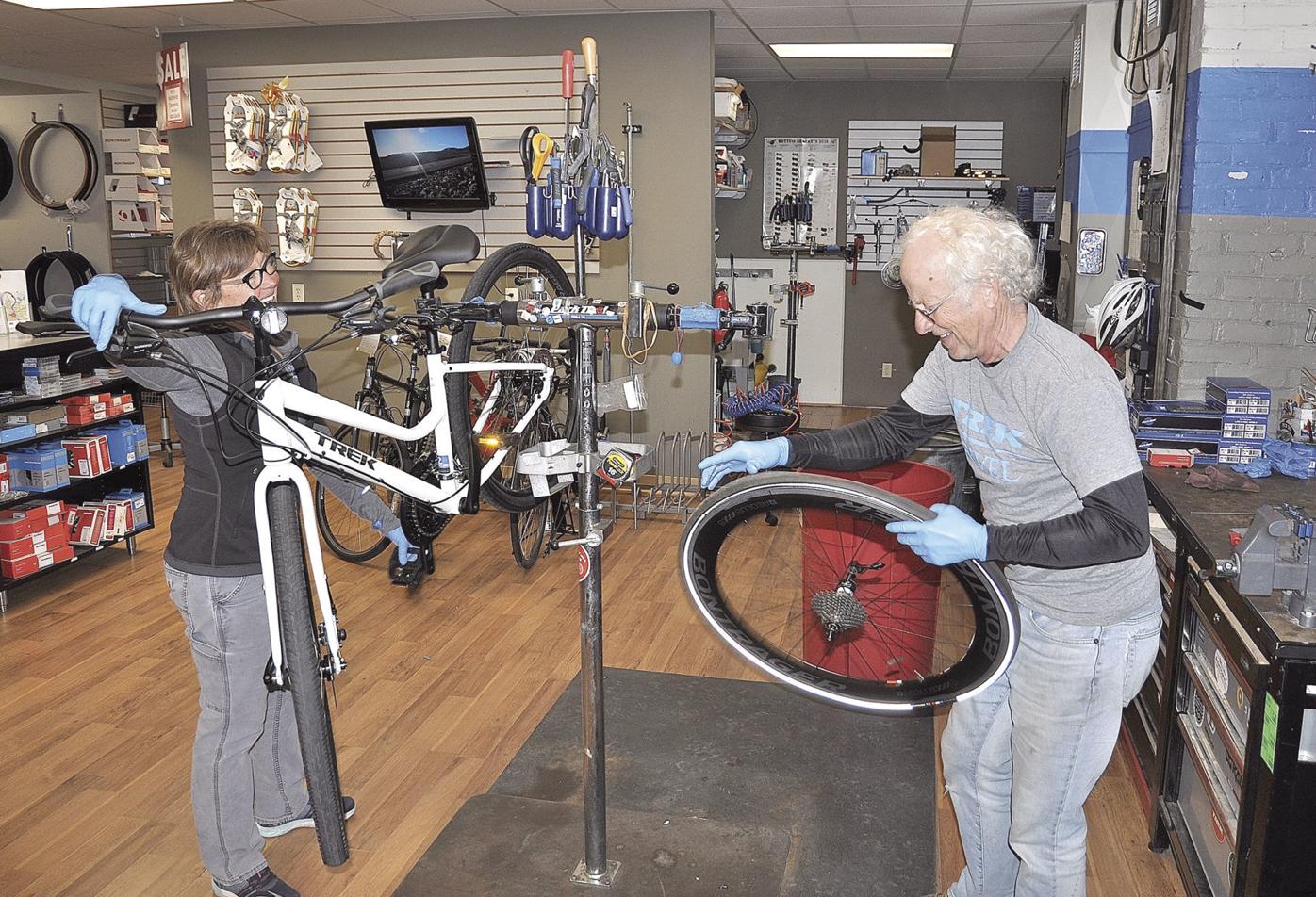 Bicycle mechanics Deb Vomhof (left) and Dale Oestreich (right) of Watertown keep busy tuning up bikes at 2 Rivers Bicycle & Outdoor in Fort Atkinson. Since Gov. Evers issued safer at home restrictions in March, customers have provided a steady stream of restoration projects into the essential business with an eye on staying active on bicycles during the COVID-19 pandemic. 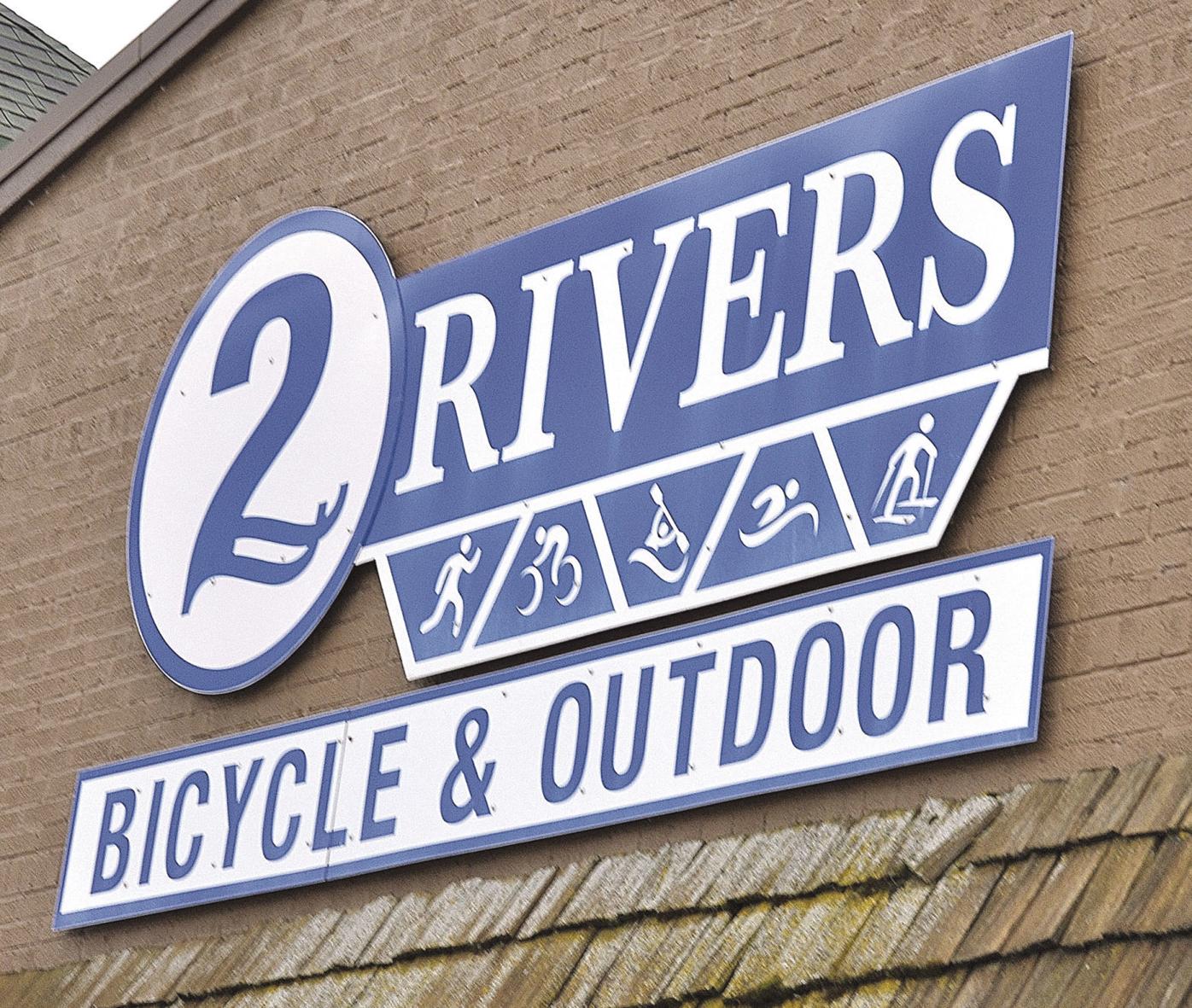 2 Rivers Bicycle & Outdoor, located on Sherman Ave. in Fort Atkinson, has been deemed an essential business by promoting responsible outdoor activity under Gov. Evers’ safer at home mandate, which took effect in March and has been extended to May 26.

Bicycle mechanics Deb Vomhof (left) and Dale Oestreich (right) of Watertown keep busy tuning up bikes at 2 Rivers Bicycle & Outdoor in Fort Atkinson. Since Gov. Evers issued safer at home restrictions in March, customers have provided a steady stream of restoration projects into the essential business with an eye on staying active on bicycles during the COVID-19 pandemic.

2 Rivers Bicycle & Outdoor, located on Sherman Ave. in Fort Atkinson, has been deemed an essential business by promoting responsible outdoor activity under Gov. Evers’ safer at home mandate, which took effect in March and has been extended to May 26.

FORT ATKINSON — Early spring is essentially restoration season for the bike mechanics at 2 Rivers Bicycle & Outdoor, and that service is deemed essential under Wisconsin’s COVID-19 guidelines.

Since Gov. Evers issued his “safer at home” regulations in March, a steady stream of customers have brought in their old bicycles to the Fort Atkinson business on Sherman Ave., eager to have them tuned up for some long overdue riding during a pleasant start to the spring season in which free time is suddenly in abundance.

“We call them resurrections,” said Deb Vomhof, one of four employees at the store. “They are finding these old bikes in the garage and bringing them in. It’s keeping us busy, which is good.”

Fellow mechanics John Raub and Dale Oestreich joined Vomhof in looking over a dusty mountain bike with crusty old tires which had just been brought in for a tune-up.

“We’ve seen a lot of bikes coming in with cobwebs and people getting them down from the rafters,” Raub said. “It’s fun.”

“A lot of people are bringing bikes in to have them resurrected, because they don’t want to get any bigger than they are,” Oestreich added. “It’s hard to walk by that refrigerator.”

Store hours have been modified to just two hours a day on weekdays, from 4-6 p.m. on Tuesdays through Fridays, and three hours on Saturdays from 9 a.m.-noon.

“The limited hours are an adjustment we had to make for staff,” Raub said. “The mechanics are able to crank out tons of work because the doors are closed until 4, so that’s been huge. Mechanics come in, it varies, sometimes 8 o’clock, sometimes 10. Our work order volume has been so high, we’ve been fortunate that they can focus and not be interrupted with (showroom responsibilities). So we just kept it from 4-6 for pick-ups and drop-offs. We’re doing curbside, we’re doing delivery, we’re doing e-commerce. We’re trying to give people a lot of options if they don’t feel like coming in.”

The fourth member of the team, Brent Baumann, is working remotely during the pandemic.

“Brent’s taking phone calls,” Raub said. “We are forwarding calls to him. Even from 4-6, we have all the calls forwarded to him and he manages it from there.”

It’s not uncommon for customers to line up outside the doors 20 minutes early, and when they do, the staff opens up a little early.

“For when the showroom is open, we’ve been covering the floor,” Raub said. “It’s been tricky, trying to keep everyone spaced apart, or outside. It’s been hard, but you can’t complain. We feel fortunate that we’re even able to be open.”

Businesses such as this are deemed essential under state guidelines, which permit and even encourage people to get outside and stay active during the pandemic.

“The big benefit we sees is that mental health, people getting outside, keeping their space and the kids getting out, too,” Raub said. “We think from that standpoint, we hope we are contributing something. We’re not contributing at the same level as people at the hospital, but just to get people outside in fresh air … we’re fortunate, definitely.”

Sales of new bicycles are modest but steady at this point.

“We’re selling a new bike a day,” Raub said. “Yesterday, we had four new ones go out the door. We ordered them and built them up and got them ready. It goes in waves. You are excited about it and then, Oh, man, two weeks from now, is it going to be like this? You never know. It’s really weird. You just kind of take it when you can get it and hope the weather holds.”

Raub said family bikes are selling, but the higher end models for mountain bikes, gravel cycling, electric bikes and upright hybrids are not moving as quickly.

“If things recover a bit (with the economy), hopefully we’ll move that stuff, because of inventory dollars,” Raub said. “With a lot of people being out of work, can it catch up? We’re flat, but what will the rest of April and May and June look like. We’ve got to totally rely on those big months of April, May, June, July … August tails off a little bit, because we’ve got to save for winter, too. Being a seasonal business, it’s a little scarier (wondering) where is this going to go.”

The Glacial River Bike Trail, which runs from Janesville all the way up to Clyman along Hwy. 26, happens to pass right by the 2 Rivers store. Area riders also take advance of the Southern Kettle Moraine and Cam-Rock bike trails, both of which are 20-25 minutes away to the east and west.

Other communities aren’t as fortunate as Fort Atkinson. Until recently, Watertown’s nearest bike trail was 45 minutes away.

Oestreich and Vomhof, who worked at the now-defunct Watertown 2 Rivers Bicycle location from 2013-18, felt closer access to a bike trail would have helped sustain that location. Both are retired, but enjoy working at the Fort Atkinson location.

“We came down to Fort,” Oestreich said. “It kind of all just worked out. We were passionate about it in Watertown, but we couldn’t quite do it. We’ve always been biking since forever. I got my first nice road bike in 1974.”

Helping customers, be they first-timers or veterans, get the right bicycles is gratifying.

“Every day people are coming in, saying I’ve got to do something,” Oestreich said. “Even for us, it’s great for us to come in and do something. I think I would go crazy without it.”

“Biking is the original social distancing,” Raub added. “It’s how you to get away from stuff.”