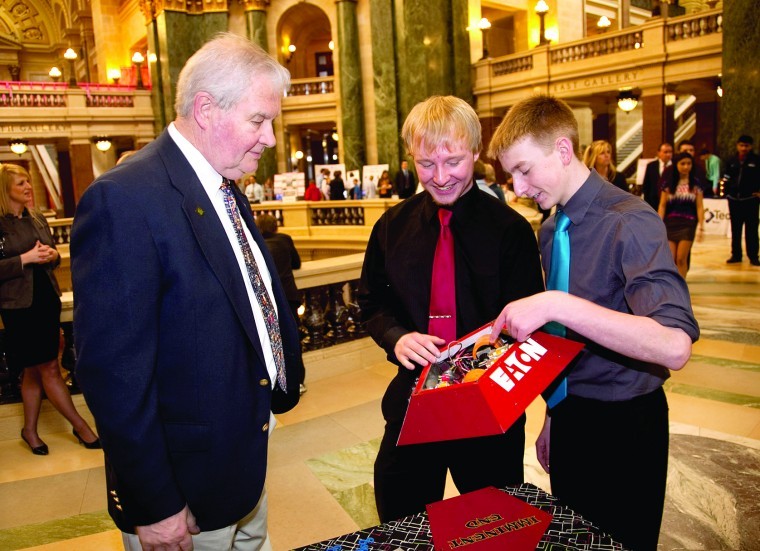 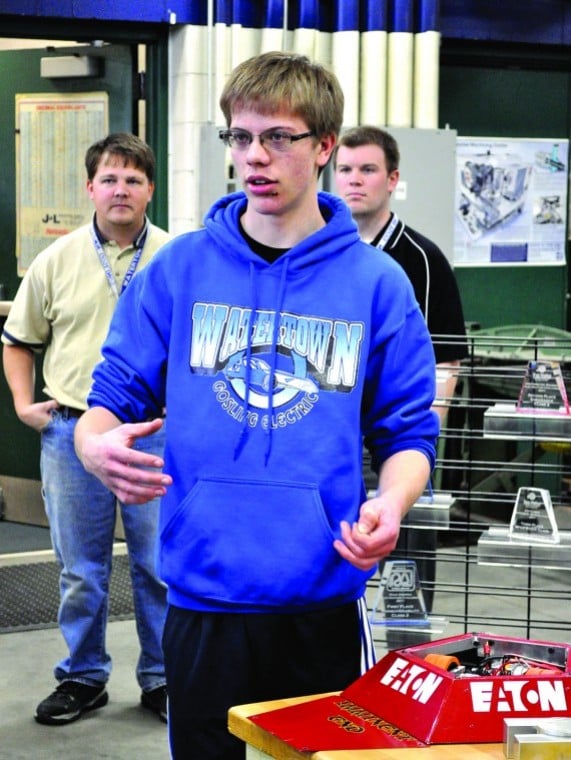 Watertown High School junior Mike Gaugert explains how the students had to create a budget, design the BattleBots and then construct them as part of their computer integrated manufacturing class, while teacher Jesse Domer and Assistant Principal Luke Spielman look on.

Watertown High School junior Mike Gaugert explains how the students had to create a budget, design the BattleBots and then construct them as part of their computer integrated manufacturing class, while teacher Jesse Domer and Assistant Principal Luke Spielman look on.

of the Daily Times staff

MADISON — On Thursday, three Watertown High School students stood in the Capitol Rotunda with their 15-pound BattleBots, waiting to answer questions from state legislators, staff and representatives from high schools and colleges across the state.

Senior Devin Herritz, juniors Mike Gaugert and Zach Timm built BattleBots as part of their computer integrated manufacturing class during the 2010-11 school year. They spent most of the year working on the projects, seeing them through the budgeting process all the way to construction and assembly.

The trio took the class because it’s offered every other year, and is a prerequisite for a capstone course they are all currently enrolled in with teacher Jesse Domer.

Representatives from colleges and universities throughout the state stopped at the boys’ table to ask questions about the bots. The guys said they were surprised how many people stopped to talk to them, but attributed their black tablecloth, which stood apart from the other tables’ white ones, to the heavy traffic.

Watertown High School was one of 15 invited to attend the event, with each school displaying projects completed in Project Lead The Way (PLTW) courses. PLTW emphasizes the importance of science, technology, engineering and mathematics (STEM) by offering students the chance to earn college credit for taking courses. The University of Wisconsin System allows students who complete certain PLTW high school classes to earn advanced standing credit at UW System schools. Additionally, program credit and/or scholarships are available through Marquette University, Milwaukee School of Engineering and many of the UW System and Wisconsin Technical College System campuses.

While the governor didn’t make an appearance, the boys said many teachers, university representatives and a few legislators approached their table.

Besides lunch, the group enjoyed seeing what types of projects other schools do for courses similar to ones taught in Watertown.

“Manufacturing is one of the bigger routes for us, but some of the schools were more into biomedical engineering or electronics rather than manufacturing,” Timm said.

One school’s booth made an air compressor and had a fan powered from a butane torch. “The heat difference would cause the fan to spin,” Timm explained.

Fischertechniks, vex robots and anatomy projects were just a few of the others Herritz, Gaugert and Timm noticed.

Many who stopped to glance at the bots were surprised to learn the project was set up like a real-world engineering project, where the students had to create a budget, order the necessary equipment and manage their time in order to finish.

Other passers-by asked what the students take-away was, which, according to them, were time management skills. Throughout the project, the teams of four or five had to meet a number of deadlines. Prioritizing their tasks and using their time wisely proved to be valuable lessons they learned.

A few other people wanted to know whether they were pursuing engineering related fields after high school. All of them are, by the way. Herritz, the senior, plans to attend Marquette University for mechanical engineering in the fall.

Still with a year of high school ahead of them, Timm said he plans to study engineering at either Milwaukee School of Engineering or UW-Madison, while Gaugert is thinking about pursuing either mechanical engineering or technical education at UW-Stout.

While they knew people were going to, at times, bombard them with questions, each student had his own idea about what the best part of the day was.

The reactions from people familiar with PLTW, but who weren’t as familiar with the manufacturing side, caught Timm’s attention most.

“Some of these people look at the stuff and what we take for being kind of normal because we’ve been around it, they look at and they are just in awe of it,” he said.

Herritz said he liked explaining the bots to people with lively curiosity about them.

“I just like it when people come and ask us about what we’re doing and they’re actually kind of interested in it,” he said. “There are some people where you can tell they came and asked just because, and there are other people who are actually interested.”

For Gaugert, it was demonstrating all he and his classmates could accomplish at their young age.

“My favorite part was just seeing all the people that were genuinely interested in what we can do being only high schoolers — that we have the capability of doing business-oriented stuff in just a high school setting,” he said.

And yes, the bots fought in a competition. Through BotsIQ-WI, part of Discovery World in Milwaukee, Gaugert and Timm were able to enter their bot into a double-elimination tournament with students from other high schools across the state.

One look at their bot, Team Ramification, and the scars from its three battles are clearly seen. It only finished one battle all the way, after the team discovered a design flaw. The bot broke down of its own accord, not due to damage inflicted by an opposing machine.

Herritz had his bot almost done, but needed another day to prepare and could not compete it. He’s thinking about entering it in this year’s competition, though.