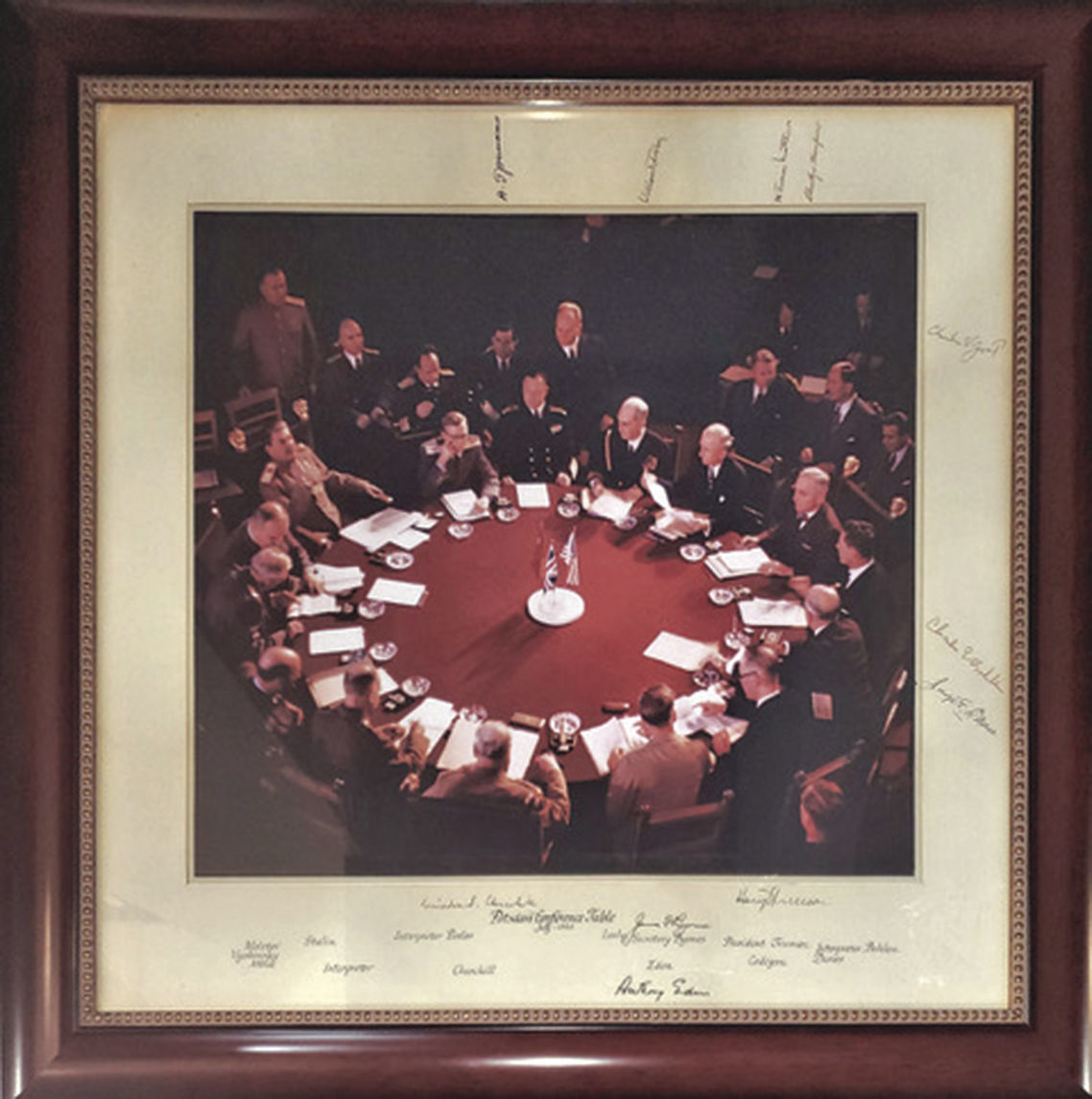 A copy of this photo of the 1945 Potsdam Conference in which the post war borders of Germany and accompanying treaties were worked out, is part of a collection that now rests with the Watertown Historical Society. The collection came from the great granddaughter of Joseph E. Davies who is pictured on the right, two seats from President Harry Truman. A number of other key figures are at the table as the names below the photo show. 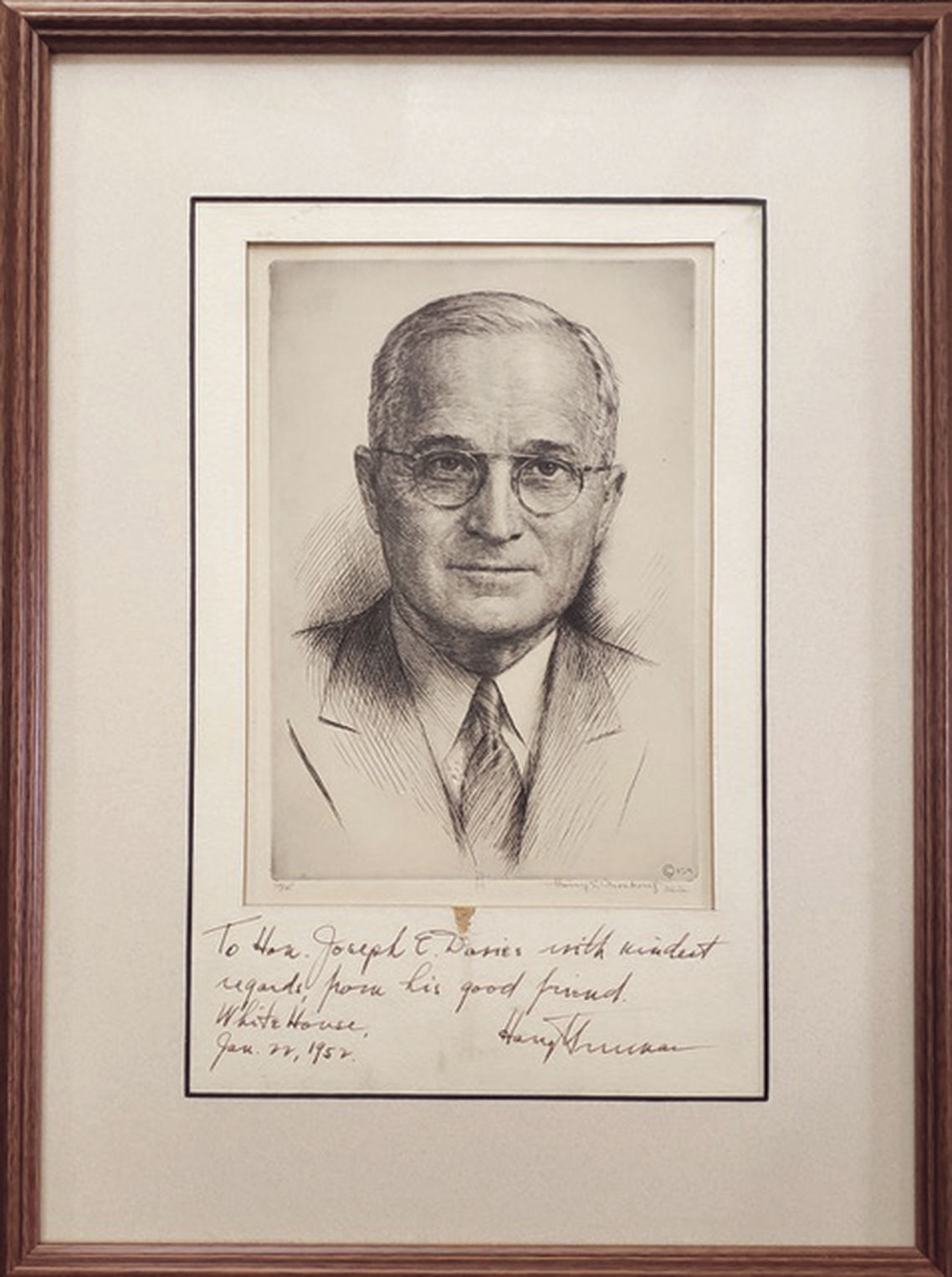 A copy of this photo of the 1945 Potsdam Conference in which the post war borders of Germany and accompanying treaties were worked out, is part of a collection that now rests with the Watertown Historical Society. The collection came from the great granddaughter of Joseph E. Davies who is pictured on the right, two seats from President Harry Truman. A number of other key figures are at the table as the names below the photo show.

In recent weeks we received a collection of photos pertaining to Joseph E. Davies, from the Davies family and we want to share some of that information with our readers.

First of all a little review of who Joseph E. Davies was. He was born in Watertown in 1876 and was valedictorian of his Watertown High School class of 1894. He went on to college at University of Wisconsin-Madison, graduating in 1901 with a law degree.

He started his law practice in Watertown but it didn’t take long before his talents brought him to the limelight in politics and government. By 1907 he was chairman of the Democratic Party of Wisconsin. He was a huge supporter of Woodrow Wilson’s campaign for president and when Wilson won the presidency, Davies was named head of the Bureau of Corporations and then was first chairman of the Federal Trade Commission.

Wilson also named him as an economic advisor to the Paris Peace Conference following World War I.

He was appointed Ambassador to the Soviet Union by President Franklin D. Roosevelt and later served as Ambassador to Belgium and Luxembourg and was a special assistant to Secretary of State Cordell Hull in World War II.

Following World War II he was made a special envoy of President Harry Truman and sat at the Potsdam Conference table where the fate of Germany was settled.

Davies married Mary Emlen Knight in 1901 and they were divorced in 1935. Later that same year Davies married Marjorie Merriweather Post, of the Post cereal family. That second marriage ended in 1955. Joe died died in 1958 in Washington, D.C.

By the time Davies married Post, he was quite wealthy, but his assets were dwarfed by Post’s. Together they were among the elite in Washington society circles.

We hear a great deal about President Donald Trump’s frequent visits to his Florida compound, Mar A Lago. Well, that at one time was a summer home of Joe Davies and Post. Trump purchased that property in 1985 for about $10 million and today it is estimated to be worth $160 million. Not a bad investment!

As many Watertown residents know, Joe Davies established the Joseph E. Davies scholarship foundation here in Watertown back in 1953 and since that time the program has awarded scholarships to literally hundreds of students. In the early years Joe Davies made several of the scholarship presentations in person.

OK, so that’s the background with this giant of a man in national political and government circles, who was born and raised here in Watertown and never forgot his roots.

Several months ago we were contacted by Dr. Maribeth Clifford Kuzmeski, who is now chairman of the board of directors of the Davies Scholarship Foundation, asking if a home could be found for some of the Davies framed pictures.

We readily accepted these unique items and made arrangements for the Watertown Historical Society to add them to their archives.

The photos and other related information were brought to us by Maribeth who had received them from Eleanor Gollob of McLean, Virginia, a great granddaughter of Joe Davies.

It’s quite a collection. Probably the most prominent of the photos is the one of the Potsdam Conference Table. The Potsdam conference brought together Joseph Stalin, Winston Churchill, Harry Truman and others as they went about the task of dividing up Germany. We have published that photo some years ago but it is adjacent to this column with some identification. We have a smaller version of the photo which was given by Davies to the late John D. Clifford, editor and publisher of the Daily Times for decades, and has since been passed along to us.

Some of the other photos forwarded to us from Eleanor Gollob through Maribeth Clifford Kuzmeski, and then to the historical society include:

A sketch of President Truman dated Jan. 22, 1952 and signed by Truman with the note “To Hon. Joseph E. Davies with kindest regards from his good friend Harry Truman, The White House.”

Time Magazine cover of March 15, 1937, which featured Joe Davies and his wife.

Other items in the package included:

Framed newspaper article from the Ashland (Wisconsin) Daily Press, reporting on the 1974 demolition of the Knight Hotel in that city.

A 1969 letter signed by Svetlana Alliluyeva who at the time resided in Princeton, N.J. Svetlana Alliluyeva was later known as Lana Peters and was the only daughter of Soviet Premier Joseph Stalin and Nadezhda Alliluyeva. In 1967 the daughter caused an international furor when she defected to, and later became a naturalized citizen of the United States.

An oval picture of John H. Knight, with his biography pasted on the back.

These are incredible historical items and are likely valuable, especially for collectors of photos like this with signatures included. But the significance is far more than monetary to our local historical society.

These items, along with others in the historical society collection will no doubt be put on display at the Octagon House in time for visitors to view next season.

We are thrilled that Maribeth and Eleanor Gollob remembered the birthplace and early years Joe Davies spent here in Watertown.

The Davies story is one that will be long remembered here in Watertown. He is one of our most famous sons who was often on the world stage.