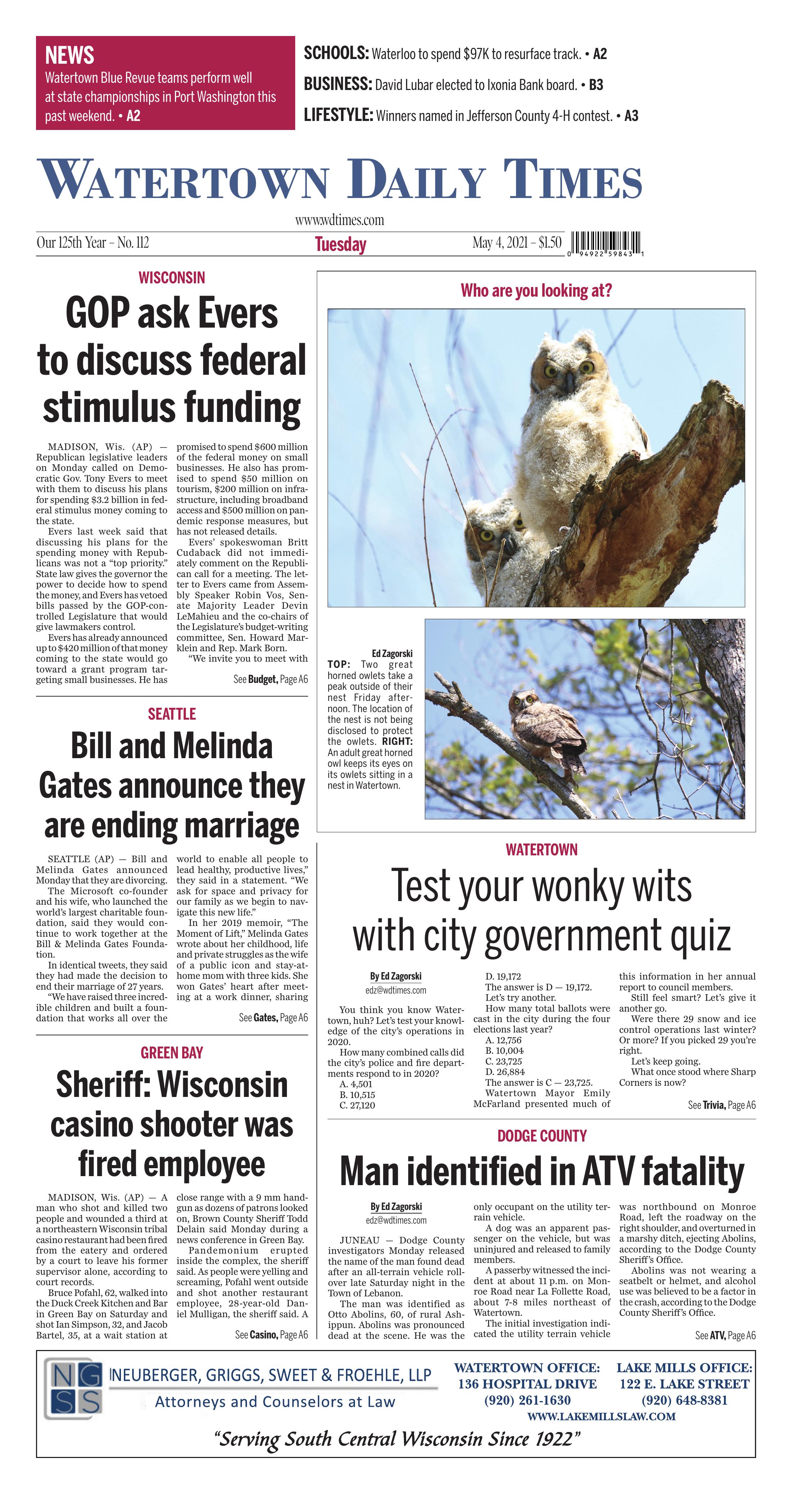 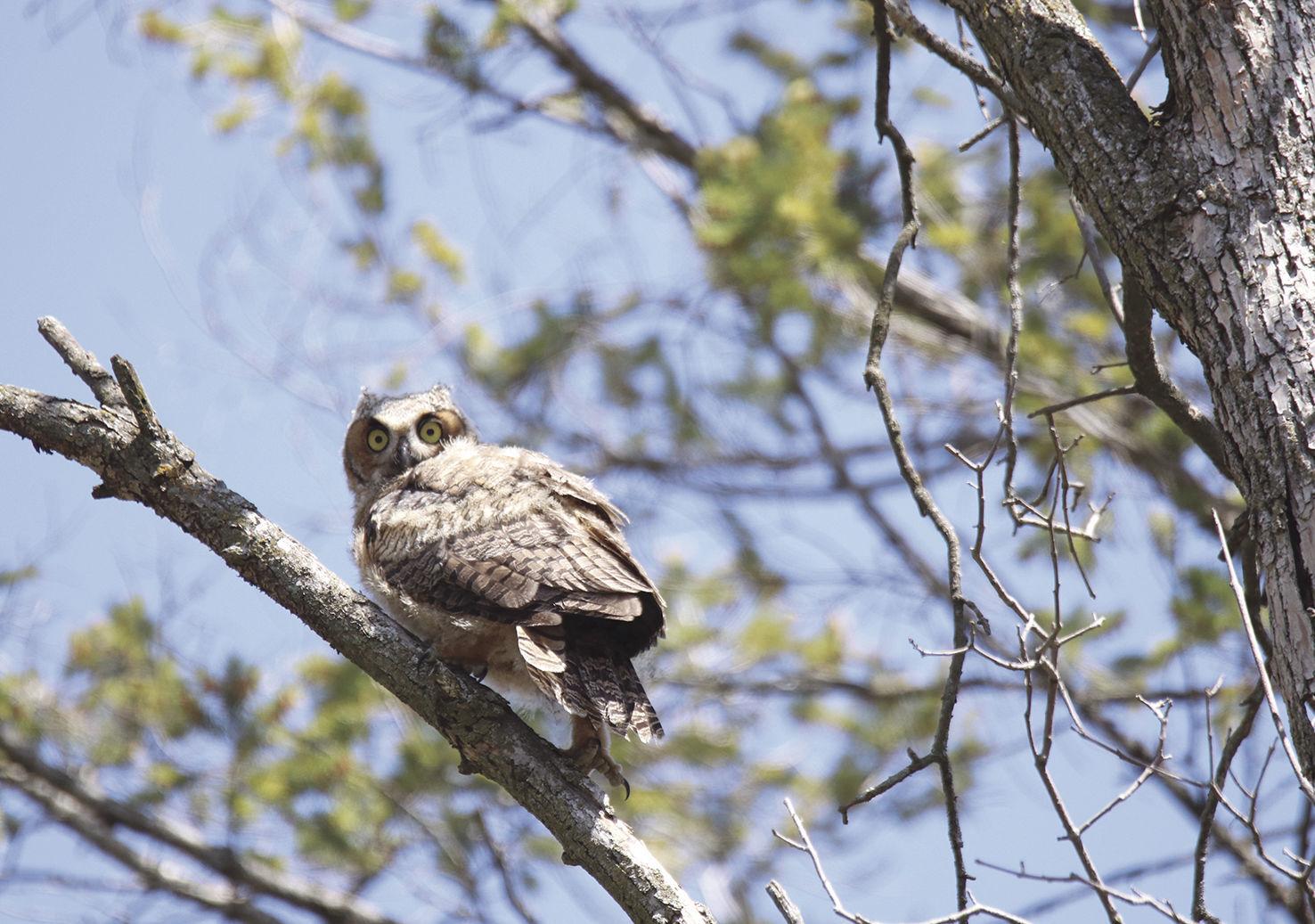 An adult great horned owl keeps its eyes on its owlets sitting in a nest in Watertown. 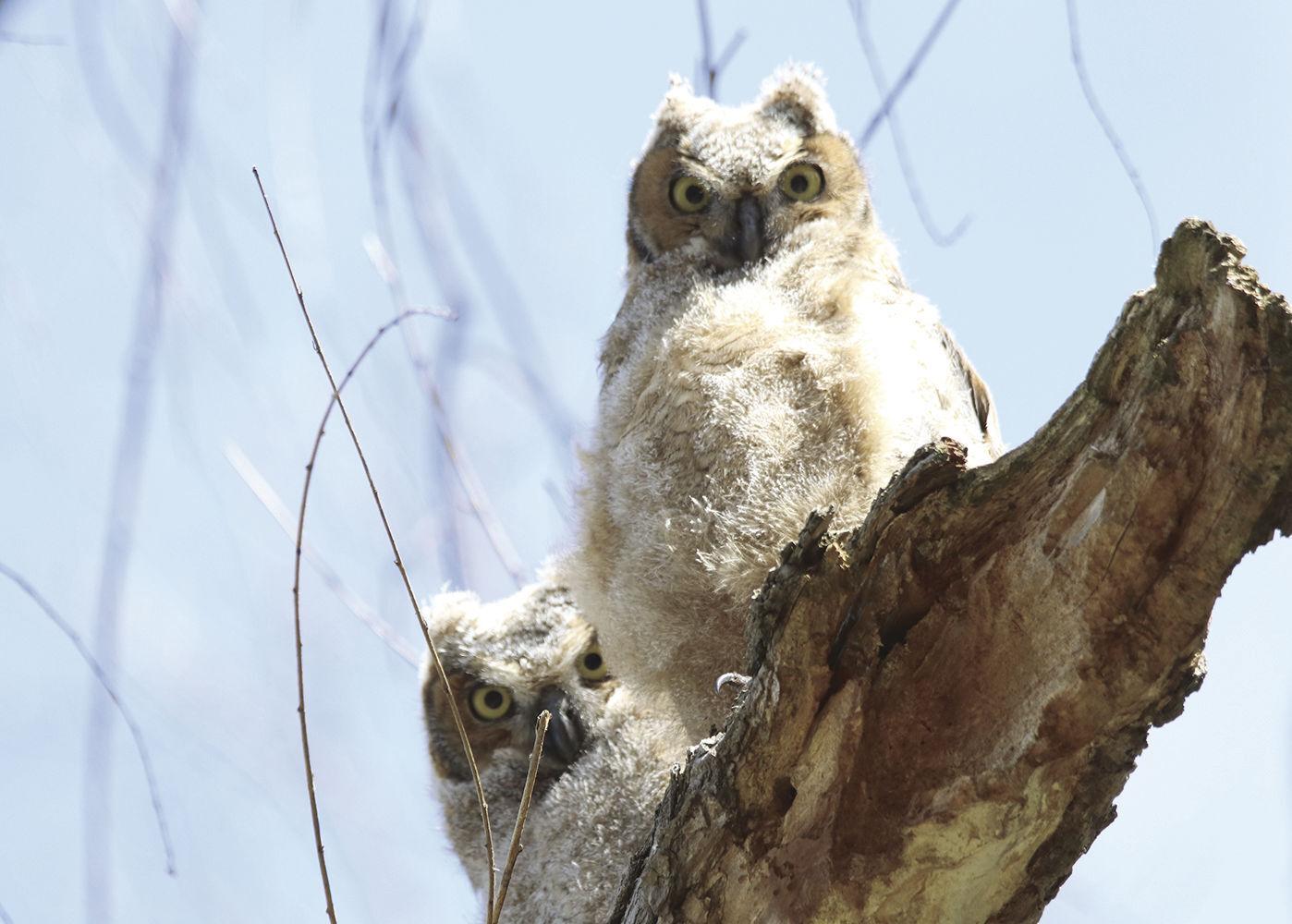 TOP: Two great horned owlets take a peak outside of their nest Friday afternoon. The location of the nest is not being disclosed to protect the owlets. RIGHT: An adult great horned owl keeps its eyes on its owlets sitting in a nest in Watertown.

You think you know Watertown, huh? Let’s test your knowledge of the city’s operations in 2020.

How many combined calls did the city’s police and fire departments respond to in 2020?

How many total ballots were cast in the city during the four elections last year?

Watertown Mayor Emily McFarland presented much of this information in her annual report to council members.

Still feel smart? Let’s give it another go.

Were there 29 snow and ice control operations last winter? Or more? If you picked 29 you’re right.

What once stood where Sharp Corners is now?

The answer is Sharp Corners sits on the old Marathon gas station site.

Not feeling lucky? Let’s try some true or false questions.

Did the city issue 31 building permits for new single homes? True or False?

Did the city issue 15,700 absentee ballots? True or false?

Feeling good about yourself? Let’s go back to multiple choice.

How many tons were collected at the city’s curbsides?

How many trees were removed last year because of the dreaded emerald ash borer?

The answer is 137 trees were removed.

How many licenses (pet, alcohol, transient merchant, tobacco and secondhand dealer) were issued?

Approximately how many library materials were checked out in 2020?

The answer is 228,000 library materials were check by patrons last year.

If your score is 10 out of 10 correct, you’re a true Watertown native, but you win nothing other than a boost in self-confidence and knowledge of the city. If you didn’t answer a single question correctly, at least you tried it.

JUNEAU — Dodge County investigators Monday released the name of the man found dead after an all-terrain vehicle rollover late Saturday night in the Town of Lebanon.

The man was identified as Otto Abolins, 60, of rural Ashippun. Abolins was pronounced dead at the scene. He was the only occupant on the utility terrain vehicle.

A dog was an apparent passenger on the vehicle, but was uninjured and released to family members.

A passerby witnessed the incident at about 11 p.m. on Monroe Road near La Follette Road, about 7-8 miles northeast of Watertown.

The initial investigation indicated the utility terrain vehicle was northbound on Monroe Road, left the roadway on the right shoulder, and overturned in a marshy ditch, ejecting Abolins, according to the Dodge County Sheriff’s Office.

Abolins was not wearing a seatbelt or helmet, and alcohol use was believed to be a factor in the crash, according to the Dodge County Sheriff’s Office.

The roadway on which the vehicle was being operated, was open to all-terrain vehicles use at the time.

Assisting the sheriff’s office and Department of Natural Resources at the scene were the Lebanon Fire Department, Watertown EMS and the Dodge County medical examiner’s office.

MADISON, Wis. (AP) — Republican legislative leaders on Monday called on Democratic Gov. Tony Evers to meet with them to discuss his plans for spending $3.2 billion in federal stimulus money coming to the state.

Evers last week said that discussing his plans for the spending money with Republicans was not a “top priority.” State law gives the governor the power to decide how to spend the money, and Evers has vetoed bills passed by the GOP-controlled Legislature that would give lawmakers control.

Evers’ spokeswoman Britt Cudaback did not immediately comment on the Republican call for a meeting. The letter to Evers came from Assembly Speaker Robin Vos, Senate Majority Leader Devin LeMahieu and the co-chairs of the Legislature’s budget-writing committee, Sen. Howard Marklein and Rep. Mark Born.

“We invite you to meet with us to share your plans for the federal funding as soon as possible,” the Republicans wrote. “We are eager to add your plans to the state budget discussion so that we may dedicate precious state resources to the priorities of all Wisconsinites.”

Republicans said having the information is an “essential” part of the process of writing the budget.

The budget committee’s co-chairs have already announced they plan to start their work on Thursday by killing nearly 300 of Evers’ proposals before rewriting the spending plan over the next several weeks. Evers last week downplayed Republican concerns about not having all the details of how the federal money will be spent, saying the budget committee will be able to complete its work.

In this 2019 photo, Bill and Melinda Gates smile at each other during an interview in Kirkland, Wash. The couple announced Monday that they are divorcing. The Microsoft co-founder and his wife, with whom he launched the world’s largest charitable foundation, said they would continue to work together at The Bill & Melinda Gates Foundation.

SEATTLE (AP) — Bill and Melinda Gates announced Monday that they are divorcing.

The Microsoft co-founder and his wife, who launched the world’s largest charitable foundation, said they would continue to work together at the Bill & Melinda Gates Foundation.

In identical tweets, they said they had made the decision to end their marriage of 27 years.

“We have raised three incredible children and built a foundation that works all over the world to enable all people to lead healthy, productive lives,” they said in a statement. “We ask for space and privacy for our family as we begin to navigate this new life.”

In her 2019 memoir, “The Moment of Lift,” Melinda Gates wrote about her childhood, life and private struggles as the wife of a public icon and stay-at-home mom with three kids. She won Gates’ heart after meeting at a work dinner, sharing a mutual love of puzzles and beating him at a math game.

The couple’s sprawling Seattle-based foundation is easily the most influential private foundation in the world, with an endowment worth nearly $50 billion. It has focused on global health and development and U.S. education issues since incorporating in 2000.

The couple were married in 1994 in Hawaii. They met after she began working at Microsoft as a product manager in 1987.

Last year, Bill Gates, formerly the world’s richest person, said he was stepping down from Microsoft’s board to focus on philanthropy.

Gates was Microsoft’s CEO until 2000 and since then has gradually scaled back his involvement in the company he started with Paul Allen in 1975. He transitioned out of a day-to-day role in Microsoft in 2008 and served as chairman of the board until 2014.

The Gateses will be the second high-profile Seattle-area billionaire couple to end their marriage in recent years.

Amazon CEO Jeff Bezos and MacKenzie Bezos finalized their divorce in 2019. MacKenzie Scott has since remarried and now focuses on her own philanthropy. She received a 4% stake in Amazon, worth more than $36 billion.

The Oneida Casino lights glow in the parking lot in the early morning hours of Sunday near Green Bay. Authorities say a gunman killed two people at a Green Bay casino restaurant and seriously wounded a third before he was shot and killed by police Saturday.

MADISON, Wis. (AP) — A man who shot and killed two people and wounded a third at a northeastern Wisconsin tribal casino restaurant had been fired from the eatery and ordered by a court to leave his former supervisor alone, according to court records.

Bruce Pofahl, 62, walked into the Duck Creek Kitchen and Bar in Green Bay on Saturday and shot Ian Simpson, 32, and Jacob Bartel, 35, at a wait station at close range with a 9 mm handgun as dozens of patrons looked on, Brown County Sheriff Todd Delain said Monday during a news conference in Green Bay.

Pandemonium erupted inside the complex, the sheriff said. As people were yelling and screaming, Pofahl went outside and shot another restaurant employee, 28-year-old Daniel Mulligan, the sheriff said. A team of Green Bay police officers opened fire on Pofahl moments later, killing him.

Mulligan was in serious but stable condition at a Milwaukee hospital on Monday, Delain said. The sheriff defended the officers’ decision to fire on Pofahl, saying “certainly this individual was a threat.”

The restaurant is part of an Oneida Nation hotel, casino and conference center complex on the tribe’s reservation just west of the city of Green Bay. The complex employs 150 to 200 people.

Pofahl’s supervisor at the restaurant, Elizabeth Walker, took out a restraining order against him in March, online court records show.

She wrote in her petition that Pofhal had recently been fired for “a few things, including harassment,” and had been sending her texts and emails threatening her and her family for several weeks. One message read “times (sic) up” and another warned he would ruin her sister’s wedding, Walker wrote. He also sent her photos of her home, she wrote.

Pofahl declined to attend a hearing on the order, saying in a note to the court that he suffered from high blood pressure and diabetes and was afraid he’d catch COVID-19 in the courtroom. A court commissioner granted the restraining order but did not prohibit Pofahl from possessing a firearm.

It’s unclear if Walker was Pofahl’s target on Saturday night. Authorities said Pofahl was looking for a specific person when he arrived at the restaurant but that the person wasn’t there. They didn’t name that person.

Delain said again Monday that the attack was “targeted,” but he declined to elaborate beyond saying that investigators were looking into Pofahl’s relationships with former co-workers.

Walker wrote in her restraining order petition that the Oneida were aware of Pofahl’s threats. The tribe’s vice chairman, Brandon Stevens, declined to discuss what he called “personnel matters” during the news conference, saying investigators were still gathering information.

Online court records didn’t list any other civil or criminal cases against Pofahl.

Oneida Chairman Tehassi Hill told WLUK-TV on Sunday that he was in “disbelief” and called the shooting “scary.” He said the tribe prohibits firearms on its properties but that “(mass shootings are) kind of a regular thing in this country.”

Hill said he feels security is tight at the casino, but that the tribe may have to consider tougher protocols for the complex depending on investigators’ findings. Stevens noted Monday that the complex has multiple entrances and exits.

The Oneida are one of 11 tribes that operate casinos in Wisconsin under agreements with the state called compacts. Essentially, the tribes pledge a percentage of their gaming revenue to the state in exchange for the exclusive right to offer casino gambling.

Tribal gaming in Wisconsin generated nearly $1.3 billion in gross revenue in the 2018-2019 fiscal year but suffered deep losses in 2020 due to COVID-19 pandemic lockdowns.