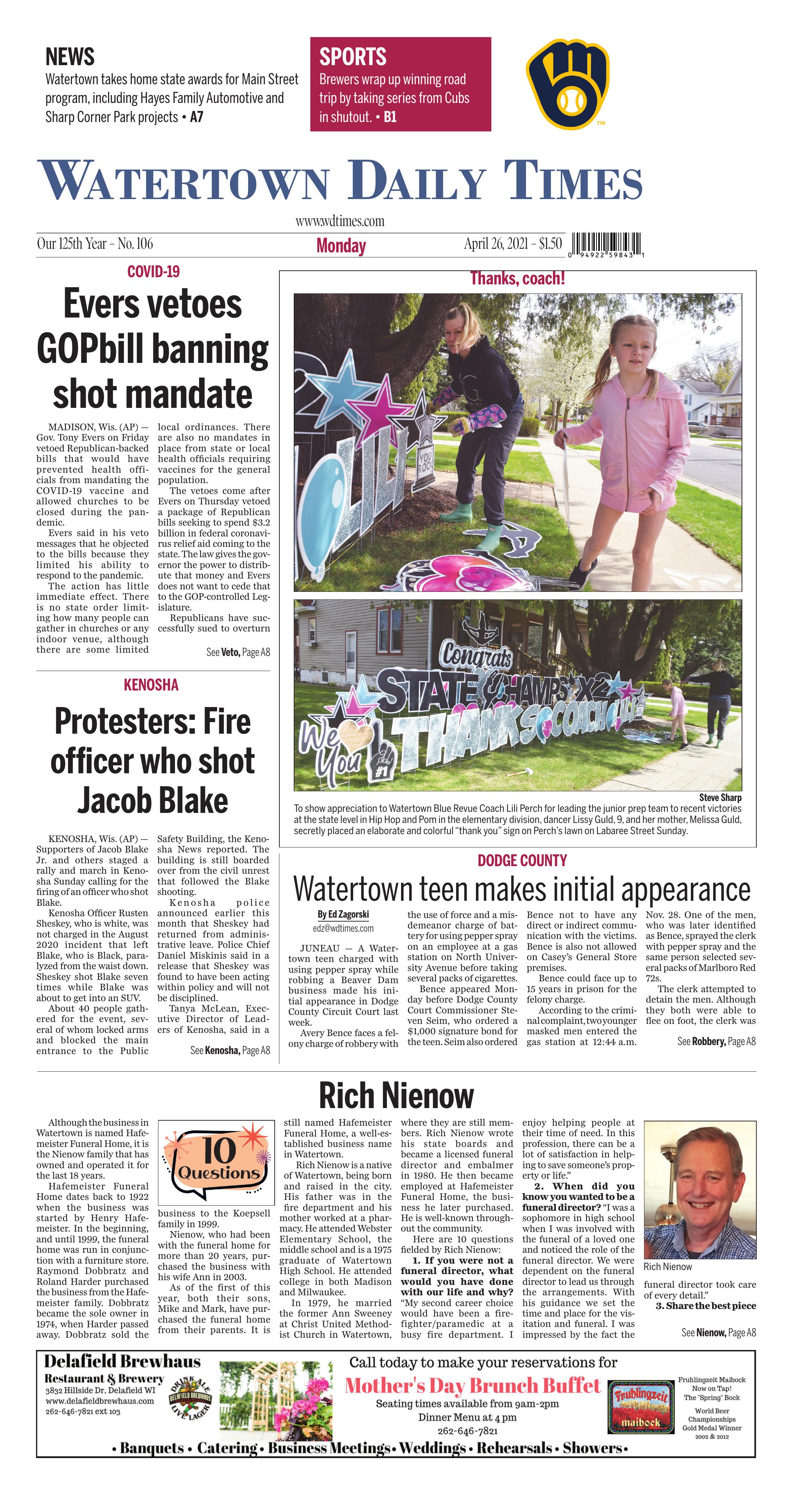 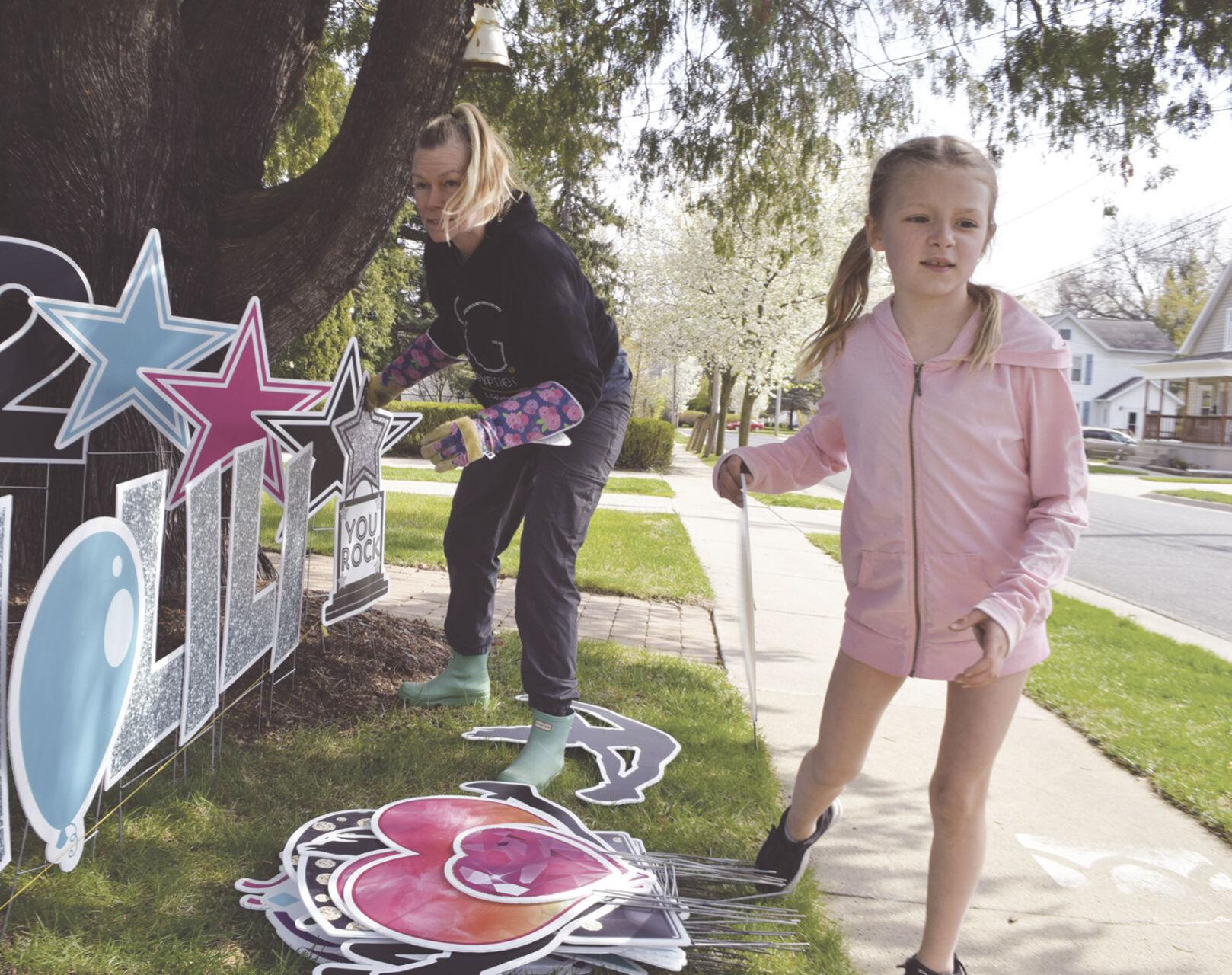 To show appreciation to Watertown Blue Revue Coach Lili Peich for leading the junior prep team to recent victories at the state level in Hip Hop and Pom in the elementary division, dancer Lissy Guld, 9, and her mother, Melissa Guld, secretly placed an elaborate and colorful “thank you” sign on Peich’s lawn on Labaree Street Sunday. 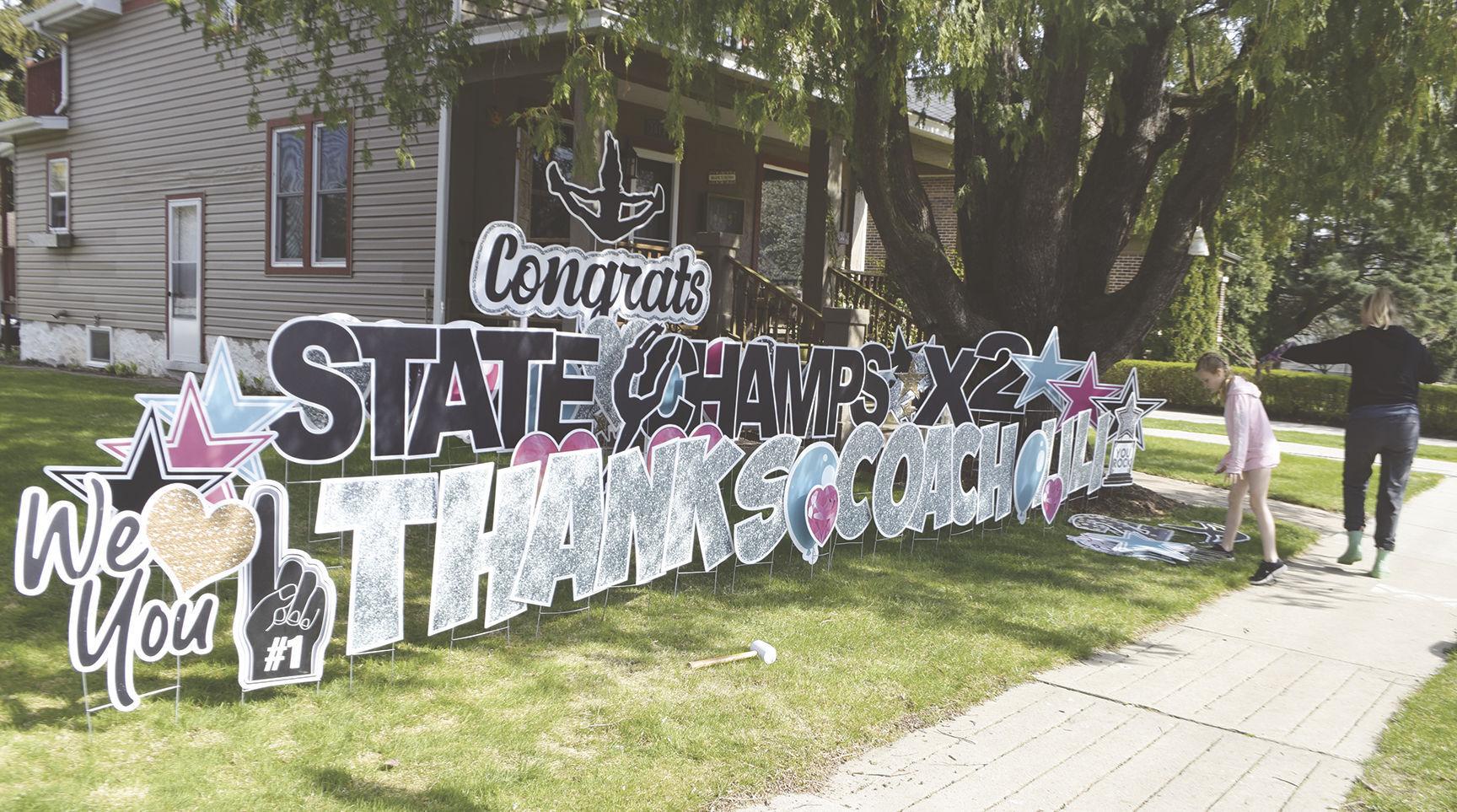 To show appreciation to Watertown Blue Revue Coach Lili Peich for leading the junior prep team to recent victories at the state level in Hip Hop and Pom in the elementary division, dancer Lissy Guld, 9, and her mother, Melissa Guld, secretly placed an elaborate and colorful "thank you" sign on Peich's lawn on Labaree Street Sunday.

Avery Bence faces a felony charge of robbery with the use of force and a misdemeanor charge of battery for using pepper spray on an employee at a gas station on North University Avenue before taking several packs of cigarettes.

Bence appeared Monday before Dodge County Court Commissioner Steven Seim, who ordered a $1,000 signature bond for the teen. Seim also ordered Bence not to have any direct or indirect communication with the victims. Bence is also not allowed on Casey’s General Store premises.

Bence could face up to 15 years in prison for the felony charge.

According to the criminal complaint, two younger masked men entered the gas station at 12:44 a.m. Nov. 28. One of the men, who was later identified as Bence, sprayed the clerk with pepper spray and the same person selected several packs of Marlboro Red 72s.

The clerk attempted to detain the men. Although they both were able to flee on foot, the clerk was able to remove the masks. Some merchandise in the store was damaged by the suspects, too.

The name of the gas station was not named in the criminal complaint, but the only gas station on North University Avenue in Beaver Dam is Casey’s General Store.

Police obtained the video footage from the assistant manager. According to the criminal complaint, Beaver Dam Police posted a Wisconsin Crime Alert on Dec. 1 and a tip about Bence being the primary suspect.

Investigators spoke to the mother of Bence, who confirmed he was the one in the photos from the gas station. Bence said he was asked by the other people he was with to steal the cigarettes, but refused to identify who he was with that night.

Bence did admit to investigators he sprayed the clerk with pepper spray.

He also told police he wanted to sell the cigarettes to an 18 or 19 year old.

Bence has a preliminary hearing set for June 3 in Dodge County Circuit Court.

Although the business in Watertown is named Hafemeister Funeral Home, it is the Nienow family that has owned and operated it for the last 18 years.

Hafemeister Funeral Home dates back to 1922 when the business was started by Henry Hafemeister. In the beginning, and until 1999, the funeral home was run in conjunction with a furniture store. Raymond Dobbratz and Roland Harder purchased the business from the Hafemeister family. Dobbratz became the sole owner in 1974, when Harder passed away. Dobbratz sold the business to the Koepsell family in 1999.

Nienow, who had been with the funeral home for more than 20 years, purchased the business with his wife Ann in 2003.

As of the first of this year, both their sons, Mike and Mark, have purchased the funeral home from their parents. It is still named Hafemeister Funeral Home, a well-established business name in Watertown.

Rich Nienow is a native of Watertown, being born and raised in the city. His father was in the fire department and his mother worked at a pharmacy. He attended Webster Elementary School, the middle school and is a 1975 graduate of Watertown High School. He attended college in both Madison and Milwaukee.

In 1979, he married the former Ann Sweeney at Christ United Methodist Church in Watertown, where they are still members. Rich Nienow wrote his state boards and became a licensed funeral director and embalmer in 1980. He then became employed at Hafemeister Funeral Home, the business he later purchased. He is well-known throughout the community.

1. If you were not a funeral director, what would you have done with our life and why? “My second career choice would have been a firefighter/paramedic at a busy fire department. I enjoy helping people at their time of need. In this profession, there can be a lot of satisfaction in helping to save someone’s property or life.”

3. Share the best piece of advice you have been given in life. “The best advice I was given in life is the Golden Rule ‘Do unto others as you would have them do unto you.’”

4. Name a skill you wish you had. “I would like to be a better woodworker, building furniture and cabinets.”

5. What is the photo on your cellphone lock screen right now? What is the story behind it? “The photo is of my three granddaughters. I do not think I need to explain it.”

6. At the grocery store, what one item goes in your cart whether you need it or not? “Ice cream, and I certainly do not need it.”

7. What food would you absolutely not eat? “Brussel sprouts, I don’t even like the smell of them cooking.”

8. What is the single greatest food in the history of mankind? “Pizza, easy to make and you can add pretty much anything you like.”

9. The single coolest thing that ever happened to me is ________? “I became an EMT (Emergency Medical Technician) in 1977. In August of 1992, I had taken my two sons and three of the neighbor kids to River Bend for an afternoon of fun. We took a break and got out of the pool when I noticed something dark right under the lifeguard’s chair. At first, I thought the paint on the bottom was peeling or it was an intake for the water filtration system. The closer I got the more I realized it was a child and he was not moving. We pulled him from the water, and he was not breathing and had no pulse. I told someone to call 911 and began CPR. The rest of the incident turned out fine.”

10. What is your favorite pastime activity? “Flying drones, as I find it challenging to fly them, and repair them. I can honestly say I spend more time fixing than I do flying.”