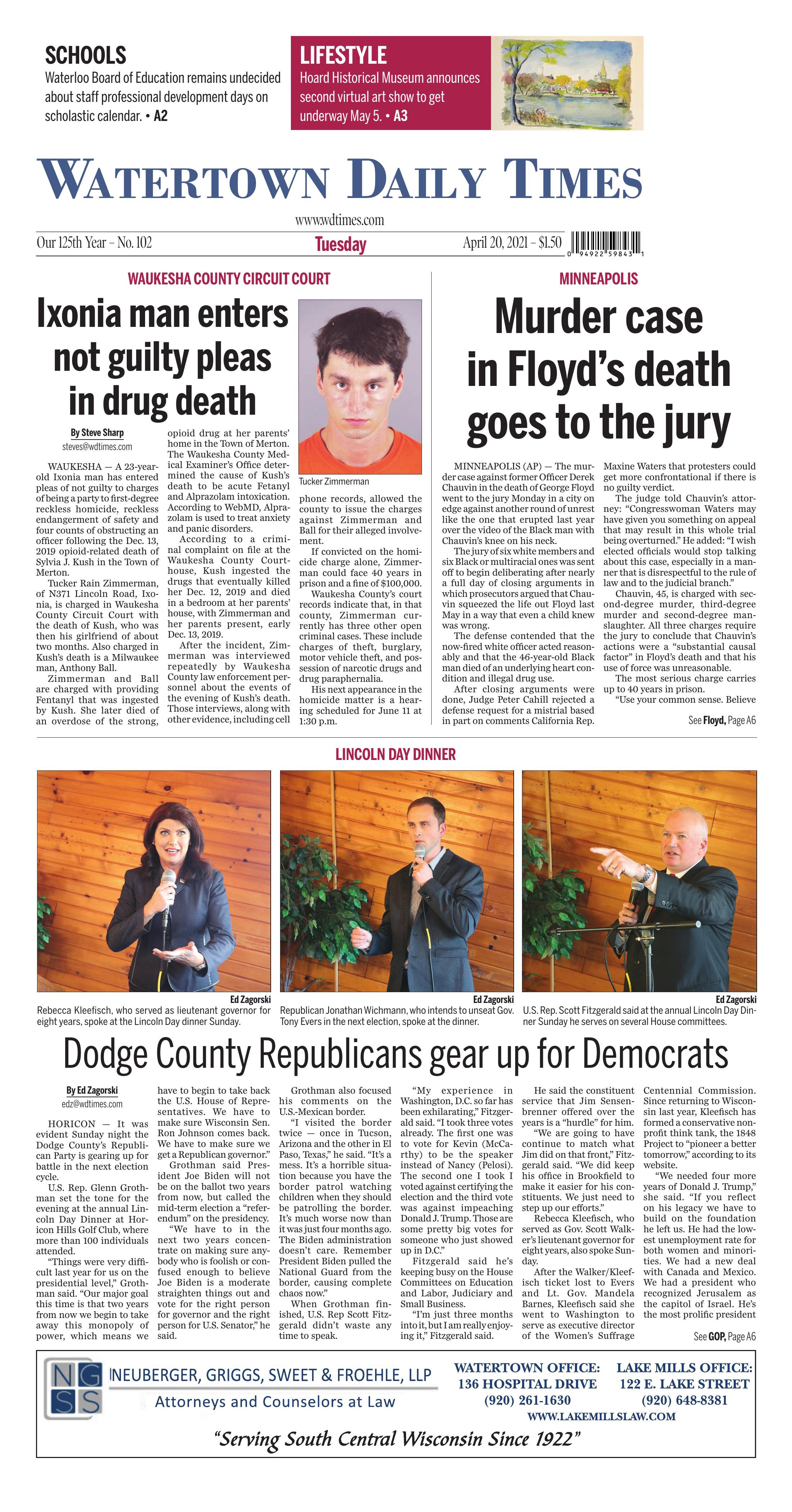 WAUKESHA — A 23-year-old Ixonia man has entered pleas of not guilty to charges of being a party to first-degree reckless homicide, reckless endangerment of safety and four counts of obstructing an officer following the Dec. 13, 2019 opioid-related death of Sylvia J. Kush in the Town of Merton.

Tucker Rain Zimmerman, of N371 Lincoln Road, Ixonia, is charged in Waukesha County Circuit Court with the death of Kush, who was then his girlfriend of about two months. Also charged in Kush’s death is a Milwaukee man, Anthony Ball.

Zimmerman and Ball are charged with providing Fentanyl that was ingested by Kush. She later died of an overdose of the strong, opioid drug at her parents’ home in the Town of Merton. The Waukesha County Medical Examiner’s Office determined the cause of Kush’s death to be acute Fetanyl and Alprazolam intoxication. According to WebMD, Alprazolam is used to treat anxiety and panic disorders.

According to a criminal complaint on file at the Waukesha County Courthouse, Kush ingested the drugs that eventually killed her Dec. 12, 2019 and died in a bedroom at her parents’ house, with Zimmerman and her parents present, early Dec. 13, 2019.

After the incident, Zimmerman was interviewed repeatedly by Waukesha County law enforcement personnel about the events of the evening of Kush’s death. Those interviews, along with other evidence, including cell phone records, allowed the county to issue the charges against Zimmerman and Ball for their alleged involvement.

If convicted on the homicide charge alone, Zimmerman could face 40 years in prison and a fine of $100,000.

Waukesha County’s court records indicate that, in that county, Zimmerman currently has three other open criminal cases. These include charges of theft, burglary, motor vehicle theft, and possession of narcotic drugs and drug paraphernalia.

His next appearance in the homicide matter is a hearing scheduled for June 11 at 1:30 p.m.

Republican Jonathan Wichmann, who intends to unseat Gov. Tony Evers in the next election, spoke at the dinner.

HORICON — It was evident Sunday night the Dodge County’s Republican Party is gearing up for battle in the next election cycle.

U.S. Rep. Glenn Grothman set the tone for the evening at the annual Lincoln Day Dinner at Horicon Hills Golf Club, where more than 100 individuals attended.

Grothman said President Joe Biden will not be on the ballot two years from now, but called the mid-term election a “referendum” on the presidency.

Grothman also focused his comments on the U.S.-Mexican border.

“I visited the border twice — once in Tucson, Arizona and the other in El Paso, Texas,” he said. “It’s a mess. It’s a horrible situation because you have the border patrol watching children when they should be patrolling the border. It’s much worse now than it was just four months ago. The Biden administration doesn’t care. Remember President Biden pulled the National Guard from the border, causing complete chaos now.”

“My experience in Washington, D.C. so far has been exhilarating,” Fitzgerald said. “I took three votes already. The first one was to vote for Kevin (McCarthy) to be the speaker instead of Nancy (Pelosi). The second one I took I voted against certifying the election and the third vote was against impeaching Donald J. Trump. Those are some pretty big votes for someone who just showed up in D.C.”

“I’m just three months into it, but I am really enjoying it,” Fitzgerald said.

He said the constituent service that Jim Sensenbrenner offered over the years is a “hurdle” for him.

“We are going to have continue to match what Jim did on that front,” Fitzgerald said. “We did keep his office in Brookfield to make it easier for his constituents. We just need to step up our efforts.”

After the Walker/Kleefisch ticket lost to Evers and Lt. Gov. Mandela Barnes, Kleefisch said she went to Washington to serve as executive director of the Women’s Suffrage Centennial Commission. Since returning to Wisconsin last year, Kleefisch has formed a conservative nonprofit think tank, the 1848 Project to “pioneer a better tomorrow,” according to its website.

“We needed four more years of Donald J. Trump,” she said. “If you reflect on his legacy we have to build on the foundation he left us. He had the lowest unemployment rate for both women and minorities. We had a new deal with Canada and Mexico. We had a president who recognized Jerusalem as the capitol of Israel. He’s the most prolific president of our lifetime.”

She urged those to do what God intended.

Reflecting on a trip she took to Jerusalem, Kleefisch recalled the biblical story of David slaying the mighty Goliath with just a stone and having a mindset that he wasn’t going to lose.

“When we fight harder than we ever fought before we will elect a conservative governor who will open all of the schools in this state for the children,” she said. “We have to prioritize the children again.”

She said there are “rocks” all around Dodge County.

“Pick them up and fight for this county and country and do the right thing for our children,” she said.

One person who is fighting is Jonathan Wichmann, intends to unseat Gov. Tony Evers, in the next election.

“If Gov. Evers had it his way, we would still be on lockdown,” Wichmann said. “We’re still wearing masks. Our children are wearing masks. They are pushing a Communist agenda on us. I’m a fighter. I won’t run. I will stay and fight.

“I am your typical middle class. Nothing has been handed to me, but that has never stopped me from achieving my goals,” the Milwaukee native said. “I believe in hard work and determination. As a leader, I enjoy helping other people achieve success with support, a strong foundation, and resilience.”

The Republican candidate is confident in his efforts to defeat the current governor, whose controversial COVID-19 restrictions and handling of civil unrest in Kenosha sparked calls for a recall election and demands for the governor’s resignation.

“The Wisconsin people deserve better than what they’ve been getting from our elected officials, and I’m excited to be the candidate that the people can trust to create a better future for everyone,” Wichmann said.