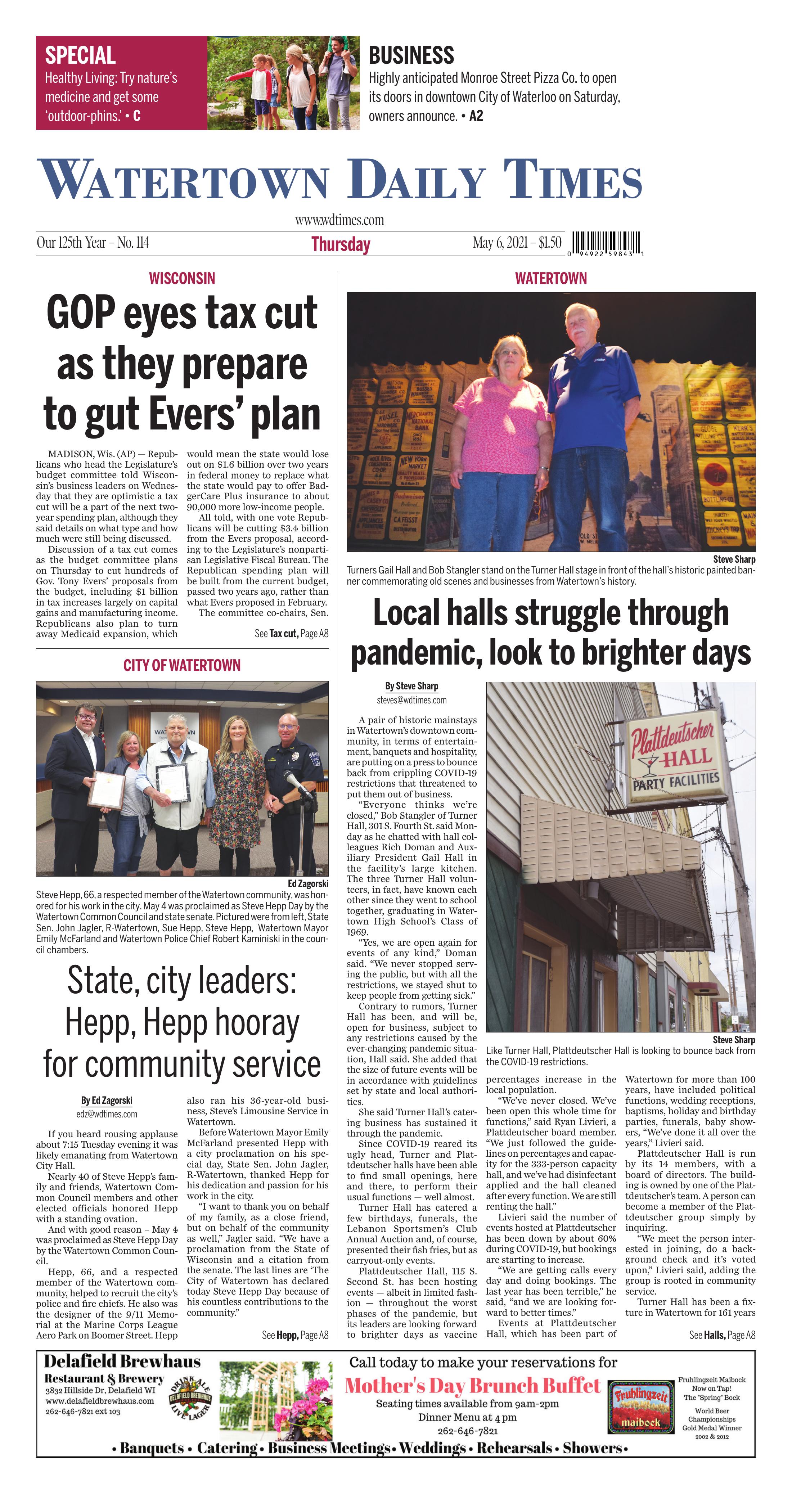 Turner Hall volunteers, from left, Bob Stangler, Rich Doman and Gail Hall, share a laugh as they talk about bringing more of the hall’s usual services back to the public in the coming weeks and months.

Like Turner Hall, Plattdeutscher Hall is looking to bounce back from the COVID-19 restrictions.

A pair of historic mainstays in Watertown’s downtown community, in terms of entertainment, banquets and hospitality, are putting on a press to bounce back from crippling COVID-19 restrictions that threatened to put them out of business.

“Everyone thinks we’re closed,” Bob Stangler of Turner Hall, 301 S. Fourth St. said Monday as he chatted with hall colleagues Rich Doman and Auxiliary President Gail Hall in the facility’s large kitchen. The three Turner Hall volunteers, in fact, have known each other since they went to school together, graduating in Watertown High School’s Class of 1969.

“Yes, we are open again for events of any kind,” Doman said. “We never stopped serving the public, but with all the restrictions, we stayed shut to keep people from getting sick.”

Contrary to rumors, Turner Hall has been, and will be, open for business, subject to any restrictions caused by the ever-changing pandemic situation, Hall said. She added that the size of future events will be in accordance with guidelines set by state and local authorities.

She said Turner Hall’s catering business has sustained it through the pandemic.

Since COVID-19 reared its ugly head, Turner and Plattdeutscher halls have been able to find small openings, here and there, to perform their usual functions — well almost.

Turner Hall has catered a few birthdays, funerals, the Lebanon Sportsmen’s Club Annual Auction and, of course, presented their fish fries, but as carryout-only events.

Plattdeutscher Hall, 115 S. Second St. has been hosting events — albeit in limited fashion — throughout the worst phases of the pandemic, but its leaders are looking forward to brighter days as vaccine percentages increase in the local population.

“We’ve never closed. We’ve been open this whole time for functions,” said Ryan Livieri, a Plattdeutscher board member. “We just followed the guidelines on percentages and capacity for the 333-person capacity hall, and we’ve had disinfectant applied and the hall cleaned after every function. We are still renting the hall.”

Livieri said the number of events hosted at Plattdeutscher has been down by about 60% during COVID-19, but bookings are starting to increase.

“We are getting calls every day and doing bookings. The last year has been terrible,” he said, “and we are looking forward to better times.”

Events at Plattdeutscher Hall, which has been part of Watertown for more than 100 years, have included political functions, wedding receptions, baptisms, holiday and birthday parties, funerals, baby showers, “We’ve done it all over the years,” Livieri said.

“We meet the person interested in joining, do a background check and it’s voted upon,” Livieri said, adding the group is rooted in community service.

Turner Hall has been a fixture in Watertown for 161 years and Doman has seen 51 of those anniversaries. He is a historian for the structure, having documented its background with late Watertown author/historian Bill Jannke in the book, “Watertown Turner Hall 150th Anniversary Celebration.”

Doman said Watertown’s Turner Hall, like others of its brand in Wisconsin, began as a tumbling organization and social scene for German immigrants that helped them maintain fitness and ties to their former cultures. He said there are only a few such halls left, mostly in southern Wisconsin.

The tumbling aspect of these buildings and organizations is long gone, but the structures still exist. In Milwaukee, Turner Hall has been converted into a concert venue and is no longer operated by volunteers, as is Watertown’s.

The 100th anniversary of the 105th Cavalry is scheduled for Watertown’s Turner Hall one day in June and more, small, community events are being entered into the hall’s calendar.

“People have already been inquiring about us catering graduations,” Hall said, adding the Turners’ board of directors is offering a $100 discount on events. New members are also welcome to join.

A carryout fish fry is set for May 7 and a carryout ham dinner will be served May 23. A dine-in “re-start country breakfast” is set for June 13.

“We hope the community will get us up and running again,” Doman said. “I’m so glad we are back to serve the community. I have many ties here with leaders and we appreciate them doing their events here.”

“This has been a great organization for many years and we look forward to keeping going,” Stangler added.

Like the Turners, Livieri has one thing he wants to convey to the public.

“We are open for business,” he said.

Steve Hepp, 66, a respected member of the Watertown community, was honored for his work in the city. May 4 was proclaimed as Steve Hepp Day by the Watertown Common Council and state senate. Pictured were from left, State Sen. John Jagler, R-Watertown, Sue Hepp, Steve Hepp, Watertown Mayor Emily McFarland and Watertown Police Chief Robert Kaminiski in the council chambers.

If you heard rousing applause about 7:15 Tuesday evening it was likely emanating from Watertown City Hall.

And with good reason – May 4 was proclaimed as Steve Hepp Day by the Watertown Common Council.

Hepp, 66, and a respected member of the Watertown community, helped to recruit the city’s police and fire chiefs. He also was the designer of the 9/11 Memorial at the Marine Corps League Aero Park on Boomer Street. Hepp also ran his 36-year-old business, Steve’s Limousine Service in Watertown.

Before Watertown Mayor Emily McFarland presented Hepp with a city proclamation on his special day, State Sen. John Jagler, R-Watertown, thanked Hepp for his dedication and passion for his work in the city.

“I want to thank you on behalf of my family, as a close friend, but on behalf of the community as well,” Jagler said. “We have a proclamation from the State of Wisconsin and a citation from the senate. The last lines are ‘The City of Watertown has declared today Steve Hepp Day because of his countless contributions to the community.”

Jagler said it was signed by him and Chris Kapenga, R-Delafield, the president of the senate.

“I just want to thank you for your years of service to Watertown,” Kaminski said. “You put 13 years on Watertown’s Police and Fire Commission and all 13 of those years, I was on the commission as an officer and as a sergeant. Three years ago, you wrote a nice letter to the commission recommending a captain for the chief’s position and that was me. The letter is in my office today. I appreciate all you have done for our department and our city. Happy Steve Hepp Day!”

McFarland said — despite working with Hepp for only two years — she learned a great deal from him, which came from his intangibles, such as his “candor and kindness” and love for Watertown.

“My team and I have worked hard to create efficiency, continuity, equitability and growth all while maintaining the foundational aspects of this community. I know some of those things I was asking of my team were a bit different, but they graciously saw the vision, offered valuable insight and suggested new paths were necessary and have come along on the journey,” McFarland said. “When I bring that same vision and change to a long standing committee member and an impactful person like Steve it can be a little scary. Will he see the vision? Will he come along? Well, Steve did and he did so courteously and with incredible intellect and impact. He not only saw the vision. He grew it. Your balanced, experienced, insightful and thoughtful approach is not something we take for granted in government.”

With the help of his wife, Sue, Hepp stood at the front of the council chambers and thanked Jagler, Kaminski and McFarland for their kind words.

“I want to thank the mayors over the last three decades for allowing them to have the faith in me to serve the community,” he said tearfully looking at the gallery. “You can’t do it without your friends and family. Thank you.”