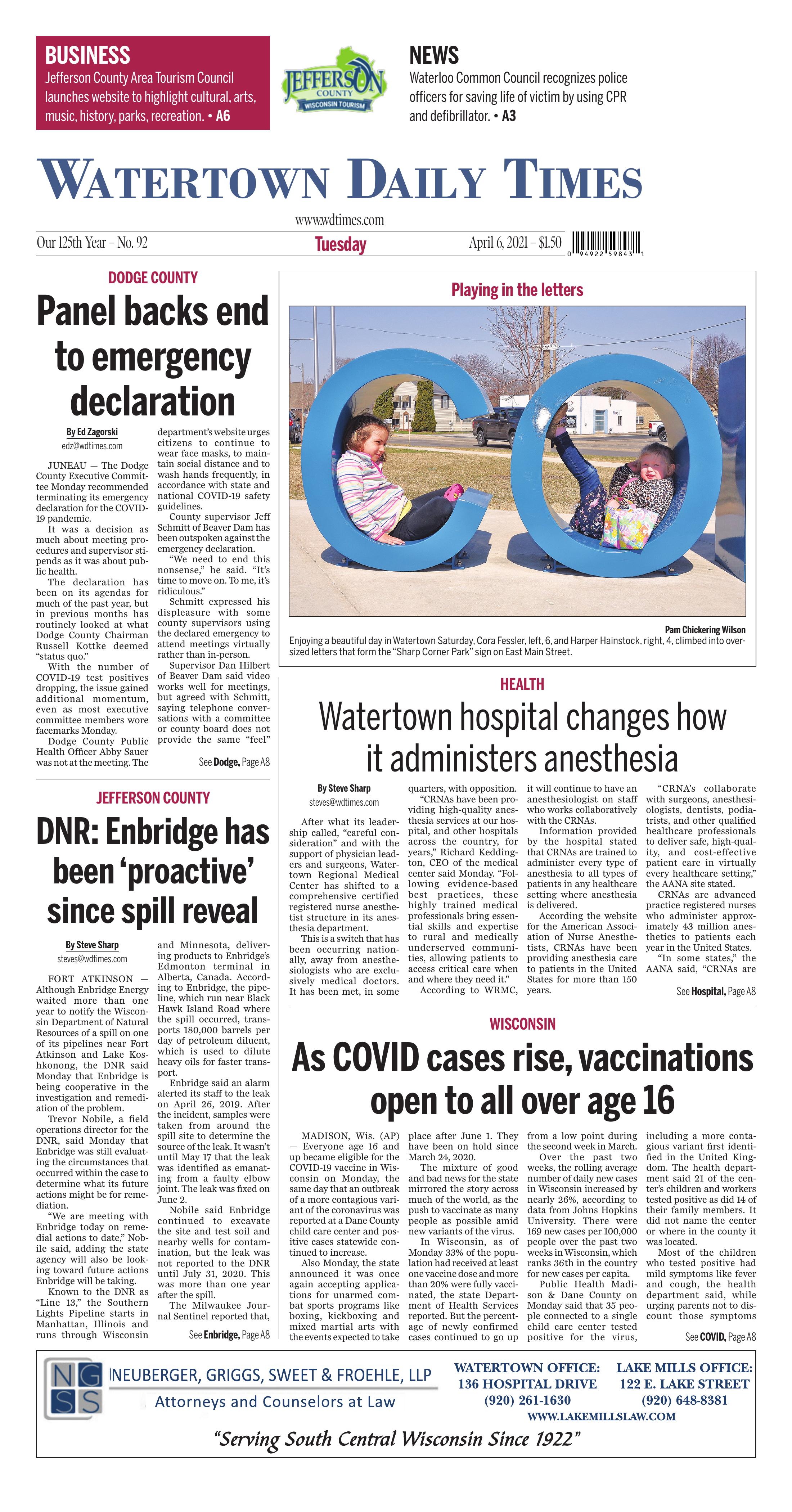 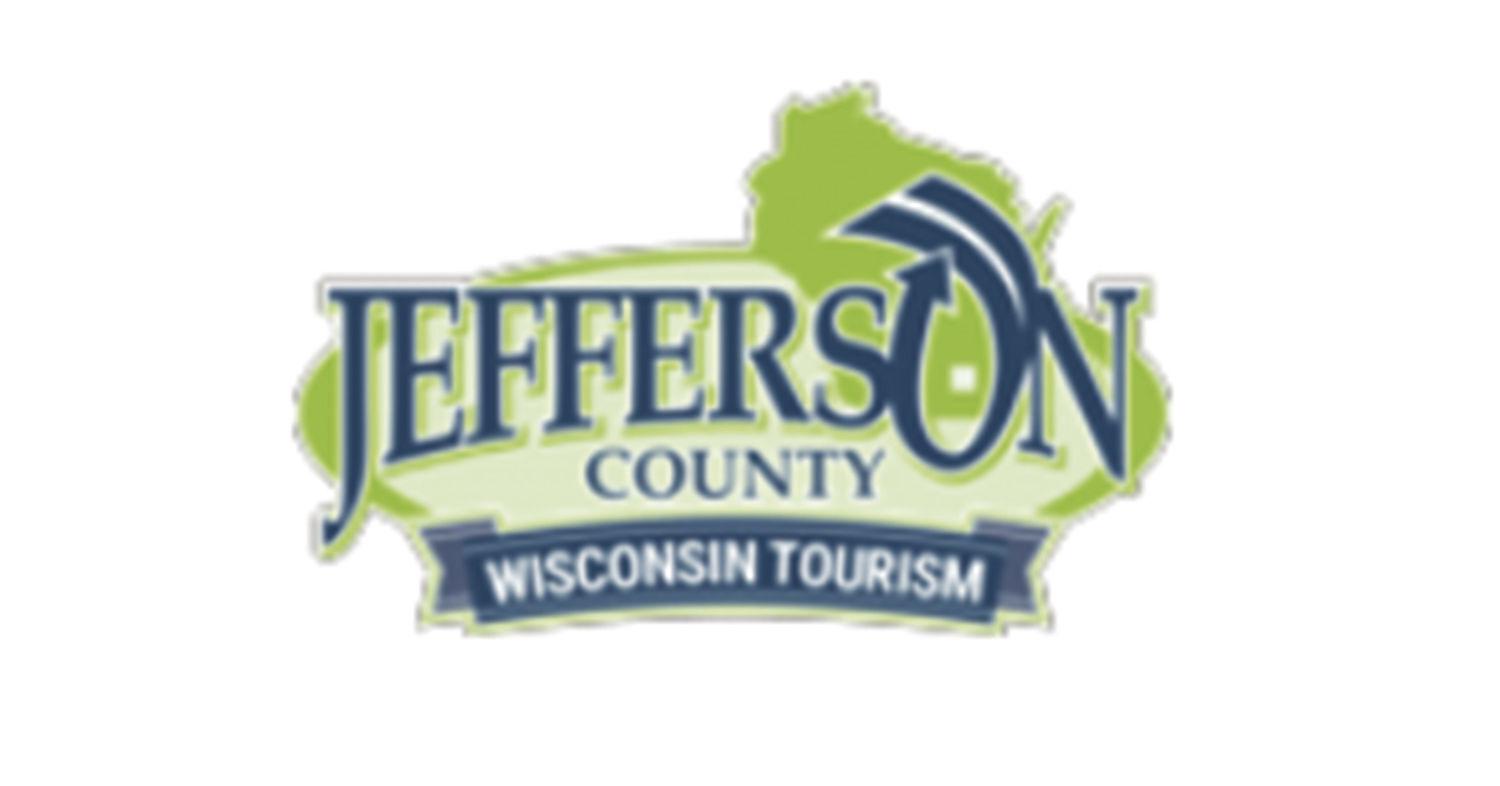 The Jefferson County Area Tourism Council has launched a new website to highlight the cultural, arts, music, history parks and outdoor recreation in the county. A6 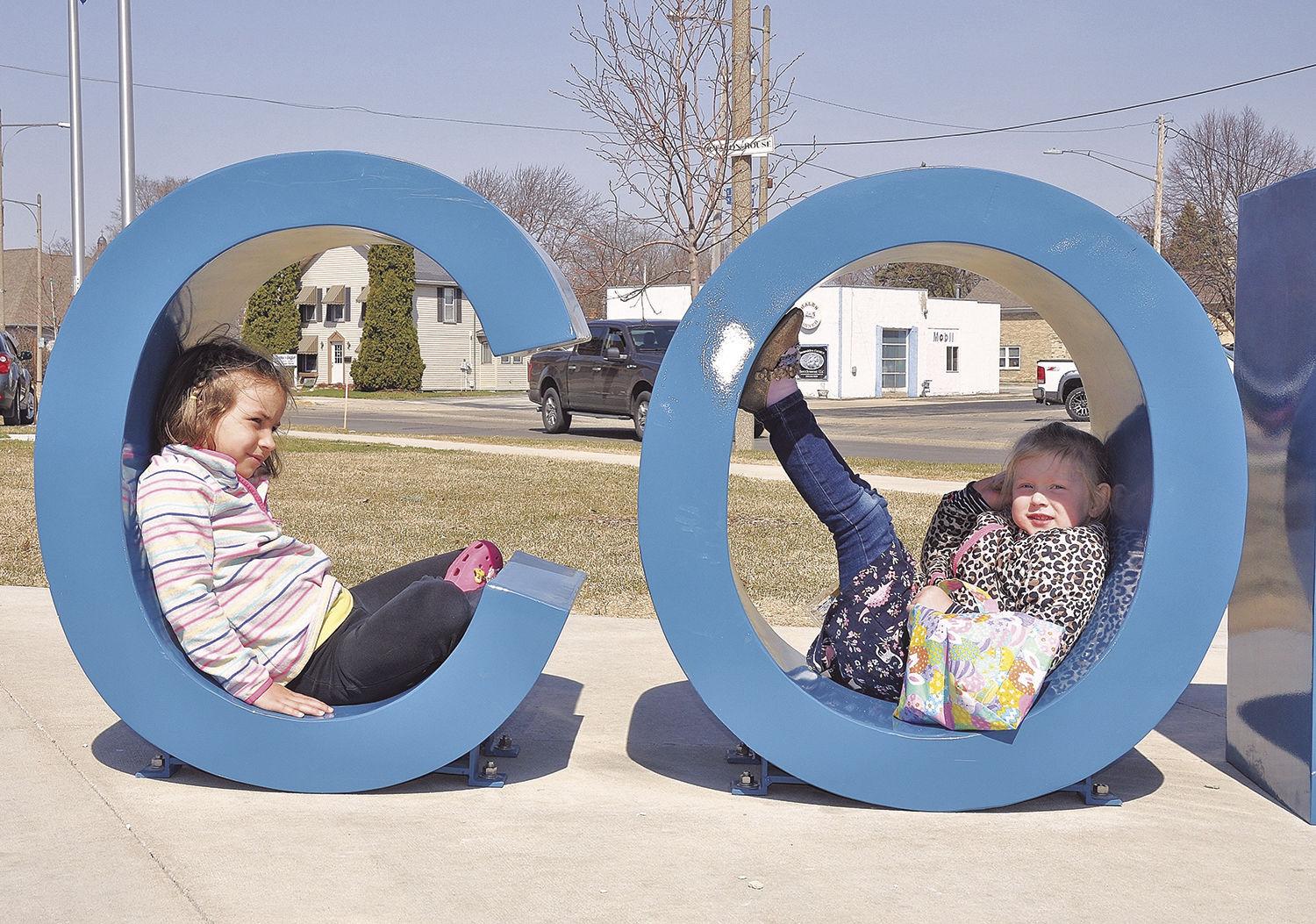 After what its leadership called, “careful consideration” and with the support of physician leaders and surgeons, Watertown Regional Medical Center has shifted to a comprehensive certified registered nurse anesthetist structure in its anesthesia department.

This is a switch that has been occurring nationally, away from anesthesiologists who are exclusively medical doctors. It has been met, in some quarters, with opposition.

“CRNAs have been providing high-quality anesthesia services at our hospital, and other hospitals across the country, for years,” Richard Keddington, CEO of the medical center said Monday. “Following evidence-based best practices, these highly trained medical professionals bring essential skills and expertise to rural and medically underserved communities, allowing patients to access critical care when and where they need it.”

According to WRMC, it will continue to have an anesthesiologist on staff who works collaboratively with the CRNAs.

Information provided by the hospital stated that CRNAs are trained to administer every type of anesthesia to all types of patients in any healthcare setting where anesthesia is delivered.

According the website for the American Association of Nurse Anesthetists, CRNAs have been providing anesthesia care to patients in the United States for more than 150 years.

CRNAs are advanced practice registered nurses who administer approximately 43 million anesthetics to patients each year in the United States.

“In some states,” the AANA said, “CRNAs are the sole anesthesia professionals in nearly 100% of rural hospitals, ensuring patient access to obstetrical, surgical, trauma stabilization and pain management services.”

CRNA services include pre-anesthesia evaluation, administering the anesthetic, monitoring and interpreting the patient’s vital signs and managing the patient throughout surgery.

In 2005, Wisconsin became the 14th state in the country to opt out of the physician-supervision requirement, making the decision that CRNAs, who are certified as advanced practice nurse providers, can legally provide care without the supervision of a physician.

“Patients who require anesthesia for surgery, labor and delivery, or any other procedure can count on a CRNA to stay with them throughout their procedure, advocate on their behalf and provide safe, high-quality care,” Keddington said. “With this approach, we are continuing to meet patients’ unique needs while making care more affordable and accessible for our community.

Another hospital in the area that uses CRNA’s for anesthesia is Fort HealthCare. A check with that hospital’s website indicated there are at least nine CRNA’s on staff who administer anesthesia.

Keddington said the WRMC is “extremely confident” in its ability to continue delivering safe, high-quality care to the community.

“We would like to recognize the talented and dedicated CRNAs who have been providing quality care to WRMC patients for years,” he said, “and we thank them for their continued effort in advancing our mission of making communities healthier.”

It was a decision as much about meeting procedures and supervisor stipends as it was about public health.

The declaration has been on its agendas for much of the past year, but in previous months has routinely looked at what Dodge County Chairman Russell Kottke deemed “status quo.”

With the number of COVID-19 test positives dropping, the issue gained additional momentum, even as most executive committee members wore facemarks Monday.

Dodge County Public Health Officer Abby Sauer was not at the meeting. The department’s website urges citizens to continue to wear face masks, to maintain social distance and to wash hands frequently, in accordance with state and national COVID-19 safety guidelines.

County supervisor Jeff Schmitt of Beaver Dam has been outspoken against the emergency declaration.

Schmitt expressed his displeasure with some county supervisors using the declared emergency to attend meetings virtually rather than in-person.

Supervisor Dan Hilbert of Beaver Dam said video works well for meetings, but agreed with Schmitt, saying telephone conversations with a committee or county board does not provide the same “feel” as being in-person at the meeting.

“If you can’t physically do it,” Schmitt said, “You need to pass the torch.”

“Accommodations have been made for those who can’t make a committee or county board meeting (because of an underlying condition), but our rules are very clear,” she said. “We have far surpassed the need for an emergency declaration now. Either we end it or we don’t. If you can make it to the bank or the grocery store, you certainly can make it to the job you asked for.”

Sheahan-Malloy said she recalled what Hilbert said at a previous meeting.

“I remember Dan Hilbert said, ‘What does it hurt?’ It does hurt. It dilutes the process,” she said. “We signed up for the job. We have constituents to represent.”

Schmitt said it’s up to the individual to make a decision to successfully represent their constituents.

“At the end of the day, you have to look in the mirror and if you can’t do the job, you need to step away,” Schmitt said.

Supervisor Joe Marsik of Columbus said countries like Italy and Spain and neighboring states like Michigan are spiking in their COVID-19 cases.

“It’s deja vu all over again,” Marsik said. “We’re not isolated. We don’t live in some fish bowl. We can see the light at the end of the tunnel, but we’re not there yet. I’m afraid we’re sending the wrong message.”

Schmitt said the emergency declaration is about conducting county business.

“If cases begin to increase, we will enact an emergency declaration,” Schmitt said.

Dodge County Corporation Counsel Kim Nass said the motion to terminate the emergency declaration will now go before the full county board for a vote at its April 20 meeting. She said if county supervisors want to take part in a meeting by telephone or video they can do so, but the individual will not be paid a per diem, mileage or counted as being in attendance.

FORT ATKINSON — Although Enbridge Energy waited more than one year to notify the Wisconsin Department of Natural Resources of a spill on one of its pipelines near Fort Atkinson and Lake Koshkonong, the DNR said Monday that Enbridge is being cooperative in the investigation and remediation of the problem.

Trevor Nobile, a field operations director for the DNR, said Monday that Enbridge was still evaluating the circumstances that occurred within the case to determine what its future actions might be for remediation.

“We are meeting with Enbridge today on remedial actions to date,” Nobile said, adding the state agency will also be looking toward future actions Enbridge will be taking.

Known to the DNR as “Line 13,” the Southern Lights Pipeline starts in Manhattan, Illinois and runs through Wisconsin and Minnesota, delivering products to Enbridge’s Edmonton terminal in Alberta, Canada. According to Enbridge, the pipeline, which run near Black Hawk Island Road where the spill occurred, transports 180,000 barrels per day of petroleum diluent, which is used to dilute heavy oils for faster transport.

Enbridge said an alarm alerted its staff to the leak on April 26, 2019. After the incident, samples were taken from around the spill site to determine the source of the leak. It wasn’t until May 17 that the leak was identified as emanating from a faulty elbow joint. The leak was fixed on June 2.

Nobile said Enbridge continued to excavate the site and test soil and nearby wells for contamination, but the leak was not reported to the DNR until July 31, 2020. This was more than one year after the spill.

The Milwaukee Journal Sentinel reported that, in November, the company reached the conclusion that 29 to 33 barrels of diluent were released into the ground.

Nobile said that, although his agency’s rules ask companies to report spills right away, it’s not uncommon for there to be a delay in reporting until more is known.

“But, he told the Journal Sentinel, “Enbridge has been proactive about meeting with the agency and keeping up with testing and remediation of the site.”

Discussing the situation as it stood late Monday morning, Nobile said the afternoon’s meeting would be a highly technical one, related to the site investigation and remediation work plan in which Enbridge would provide updates to the DNR. He said soil borings would be part of the discussion.

“In next week or so, we might know more information,” Nobile said, adding the study and remediation have ramped up substantially in the past two weeks. “This has been unfolding. We have been answering many questions and want to keep people apprised of progress.”

Nobile said the DNR will go over the recent submittal of information from Enbridge, and his agency is tracking progress on the investigation and remedial action.

At this point, Nobile said, it is hard to determine a timeline for remediation.

“All of these sites have site-specific variables, so we don’t know how long a complete cleanup could take. It’s a little early and as this remediation progresses, we will know more. But they have made valuable strides on the degree and extent of (the spill) and their contaminated soil removal.”

Nobile said Enbridge has maintained regular communications with the DNR regarding the status of its remediation.

Nobile said it is not known whether the spill made it to Lake Koshkonong.

“We don’t know that, but as the investigation unfolds, we may know more,” he said. “But there has been soil contamination and groundwater contamination.”

The company is going to continue remediation efforts at the site, according to Juli Kellner, a communications staff member for Enbridge. She said the company will continue to work with landowners impacted by the spill and Nobile said the DNR is aware of this.

He said the DNR will not conduct testing of private wells, but any private well-owner who has concerns about water quality can sample it. Enbridge has also said it will test well water of private citizens whose wells might have been affected.

“But that would be between (the two parties),” Nobile said, adding Enbridge has been, “very proactive” in the investigation and remediation of the spill site so far.