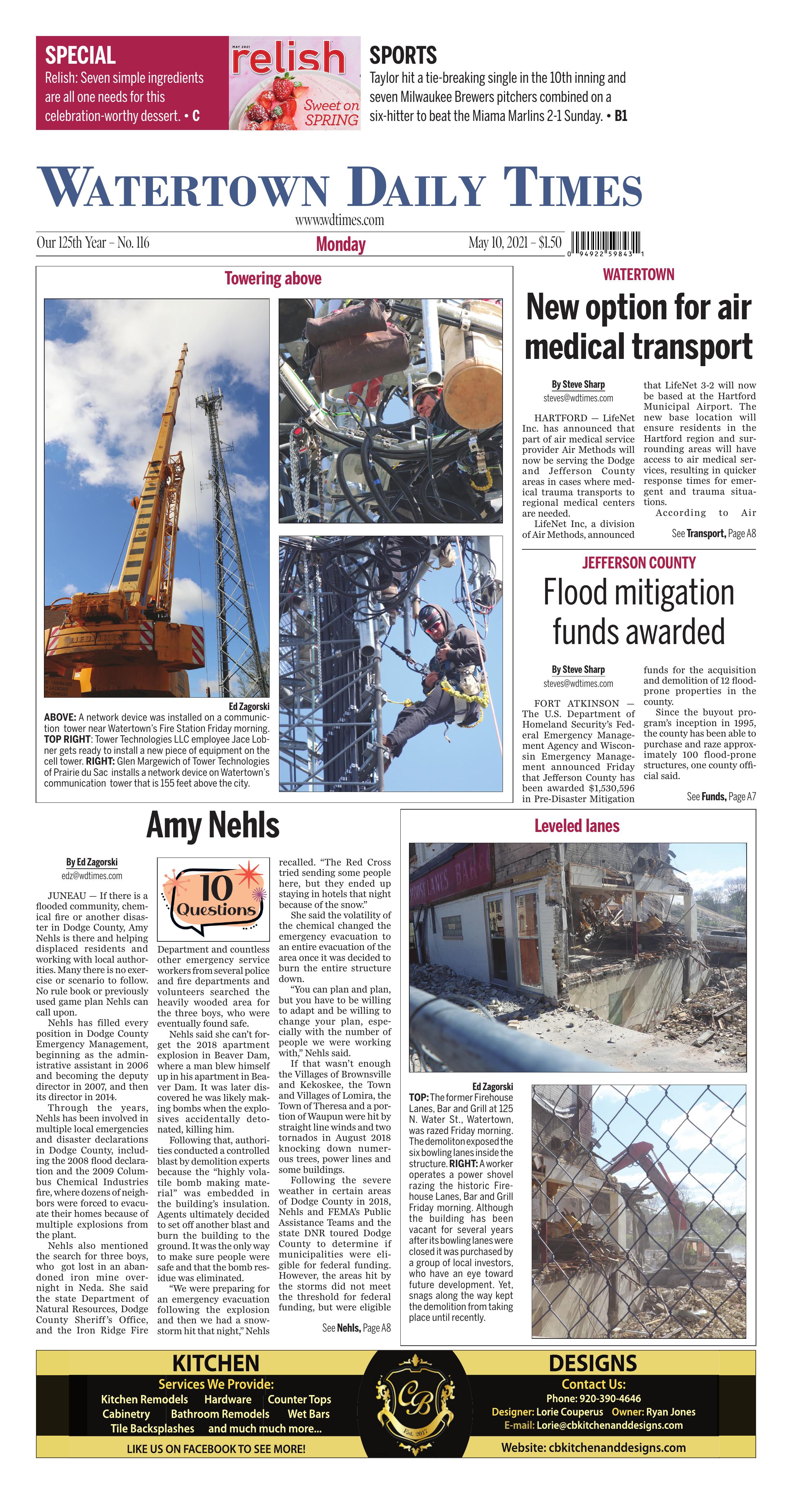 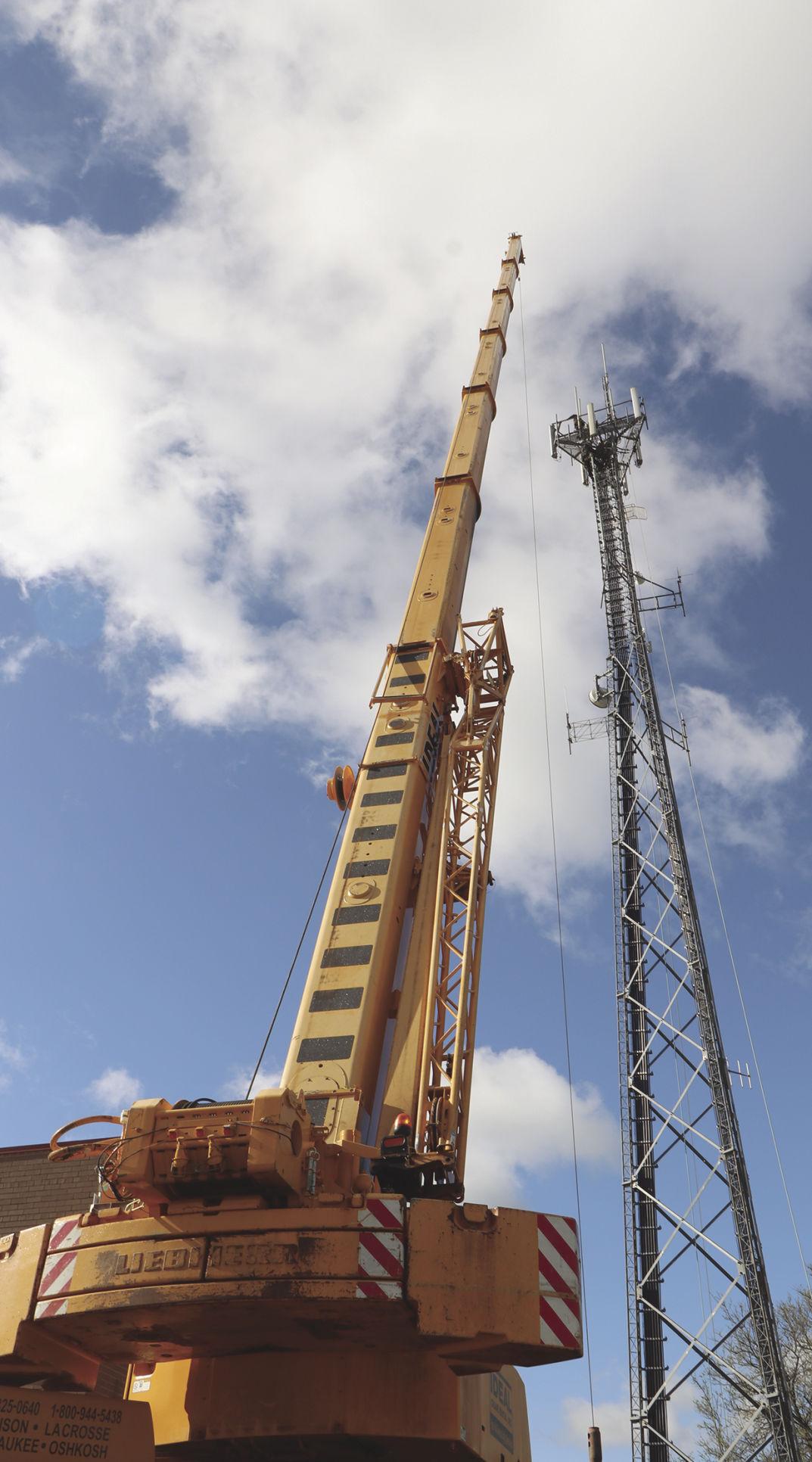 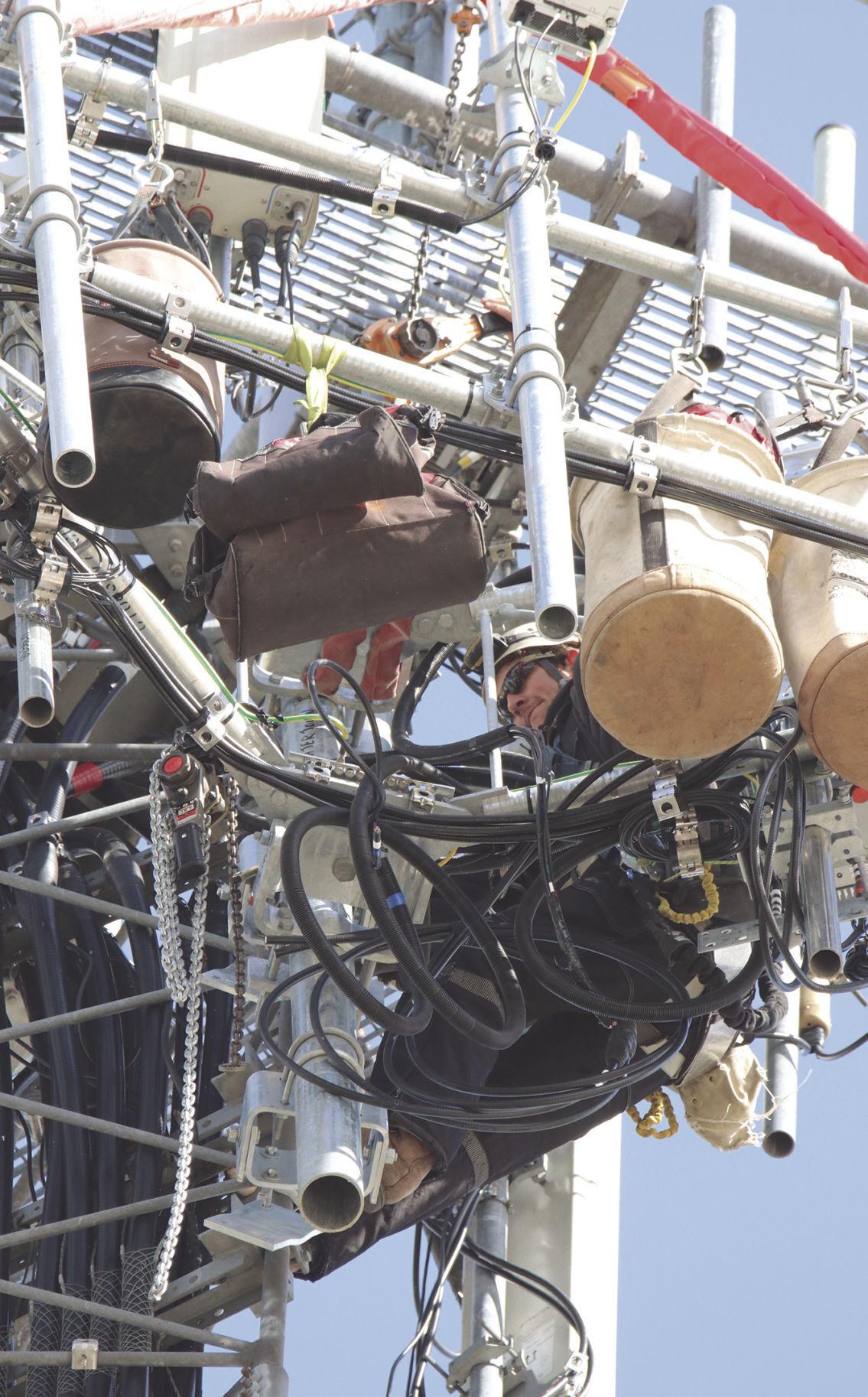 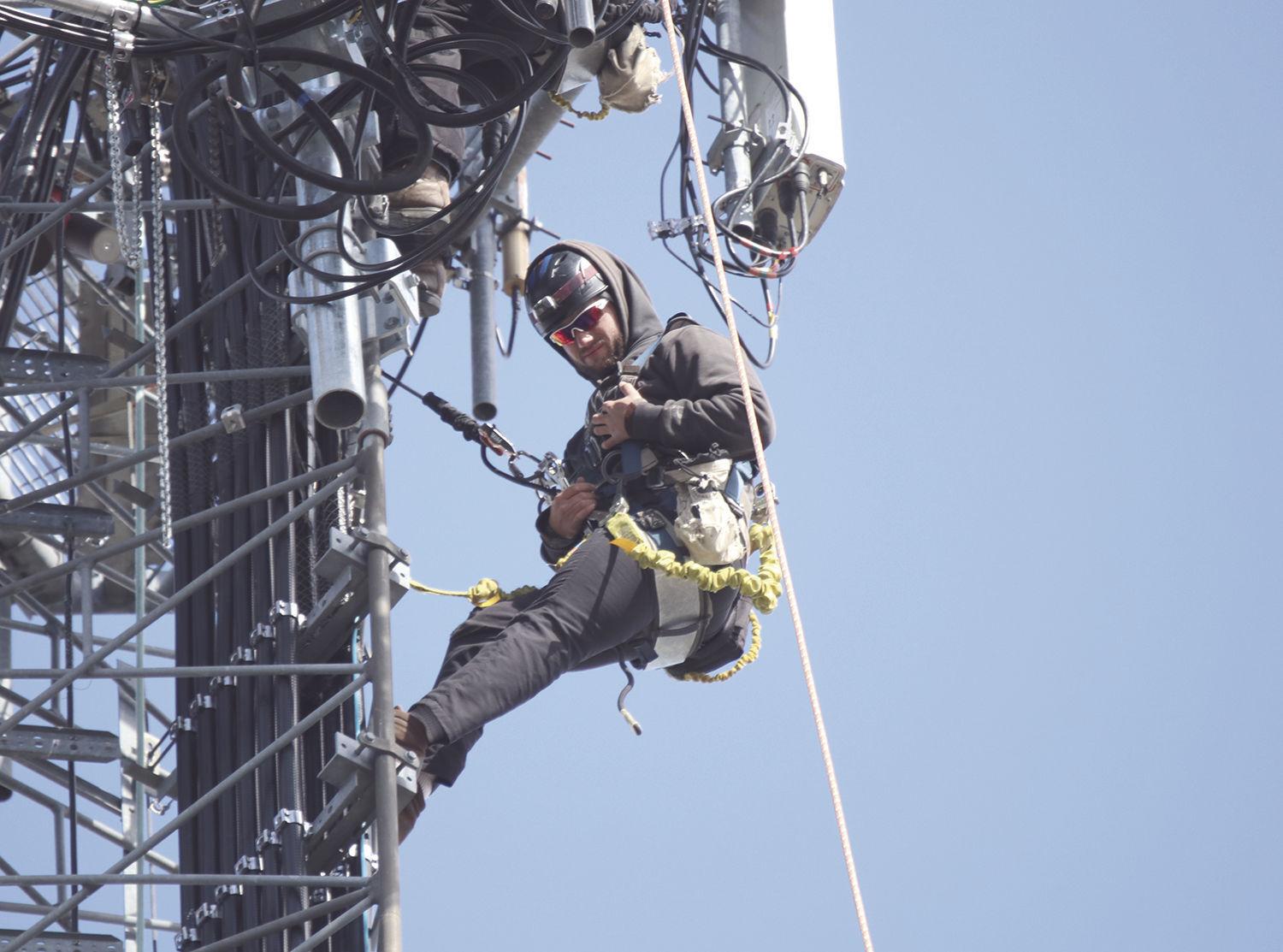 Glen Margewich of Tower Technologies, LLC of Prairie du Sac helps with a network upgrade on a tower next to the Watertown Fire Department.

JUNEAU — If there is a flooded community, chemical fire or another disaster in Dodge County, Amy Nehls is there and helping displaced residents and working with local authorities. Many there is no exercise or scenario to follow. No rule book or previously used game plan Nehls can call upon.

Nehls has filled every position in Dodge County Emergency Management, beginning as the administrative assistant in 2006 and becoming the deputy director in 2007, and then its director in 2014.

Through the years, Nehls has been involved in multiple local emergencies and disaster declarations in Dodge County, including the 2008 flood declaration and the 2009 Columbus Chemical Industries fire, where dozens of neighbors were forced to evacuate their homes because of multiple explosions from the plant.

Nehls also mentioned the search for three boys, who got lost in an abandoned iron mine overnight in Neda. She said the state Department of Natural Resources, Dodge County Sheriff’s Office, and the Iron Ridge Fire Department and countless other emergency service workers from several police and fire departments and volunteers searched the heavily wooded area for the three boys, who were eventually found safe.

Nehls said she can’t forget the 2018 apartment explosion in Beaver Dam, where a man blew himself up in his apartment in Beaver Dam. It was later discovered he was likely making bombs when the explosives accidentally detonated, killing him.

Following that, authorities conducted a controlled blast by demolition experts because the “highly volatile bomb making material” was embedded in the building’s insulation. Agents ultimately decided to set off another blast and burn the building to the ground. It was the only way to make sure people were safe and that the bomb residue was eliminated.

“We were preparing for an emergency evacuation following the explosion and then we had a snowstorm hit that night,” Nehls recalled. “The Red Cross tried sending some people here, but they ended up staying in hotels that night because of the snow.”

She said the volatility of the chemical changed the emergency evacuation to an entire evacuation of the area once it was decided to burn the entire structure down.

“You can plan and plan, but you have to be willing to adapt and be willing to change your plan, especially with the number of people we were working with,” Nehls said.

If that wasn’t enough the Villages of Brownsville and Kekoskee, the Town and Villages of Lomira, the Town of Theresa and a portion of Waupun were hit by straight line winds and two tornados in August 2018 knocking down numerous trees, power lines and some buildings.

Following the severe weather in certain areas of Dodge County in 2018, Nehls and FEMA’s Public Assistance Teams and the state DNR toured Dodge County to determine if municipalities were eligible for federal funding. However, the areas hit by the storms did not meet the threshold for federal funding, but were eligible for the Wisconsin Disaster Fund.

And in 2020 there was the COVID-19 pandemic where she assisted the county with funding for essential items such as masks, tests and other medical equipment.

Nehls said during emergencies and disasters, she assists with coordinating the response, and is responsible for operating an emergency operations center, and assists with facilitating the recovery effort. Nehls often plays the pivotal role of public information officer to ensure important messages are being consistently conveyed to the public.

Nehls instituted collaborative efforts in planning, training and exercising for agencies and organizations throughout Dodge County including fire, EMS, hazmat, law enforcement, transportation, business facilities, schools and childcare facilities. She led a team in creating and implementing a countywide school emergency operations and crisis response plan, which has been utilized by all nine school districts in Dodge County, and many other schools throughout Wisconsin.

In January 2016, Nehls was elected the Wisconsin Emergency Management Association president and served in that role for four years.

Nehls is a first responder for her local community and believes that being raised in a family of volunteer responders has helped her build the knowledge and relationships necessary to be successful in the field of emergency management.

We asked her 10 questions:

1. While driving what three songs are you likely to increase the volume on?

2. Beatles or Rolling Stones? And why?

The biggest fear in my position would be an active shooter situation, but I try not to make lists of “work fears” because they tend to come to fruition.

4. When you’re not working what do you enjoy doing?

Spending time with family and friends and driving my Dodge Challenger.

5. Did you play sports in high school? If so, what high school and what sports?

I was a cheerleader at Dodgeland middle and high schools.

It depends on my mood and who I’m with. I enjoy listening to live bands when I go out.

8. How many times have you been to Lambeau Field to watch the Packers play?

9. Brett Favre or Aaron Rodgers? And why?

Neither. I don’t watch a lot of sports unless it’s my kids playing.

10. What frustrates you the most?

Politics and how intolerant people have become. 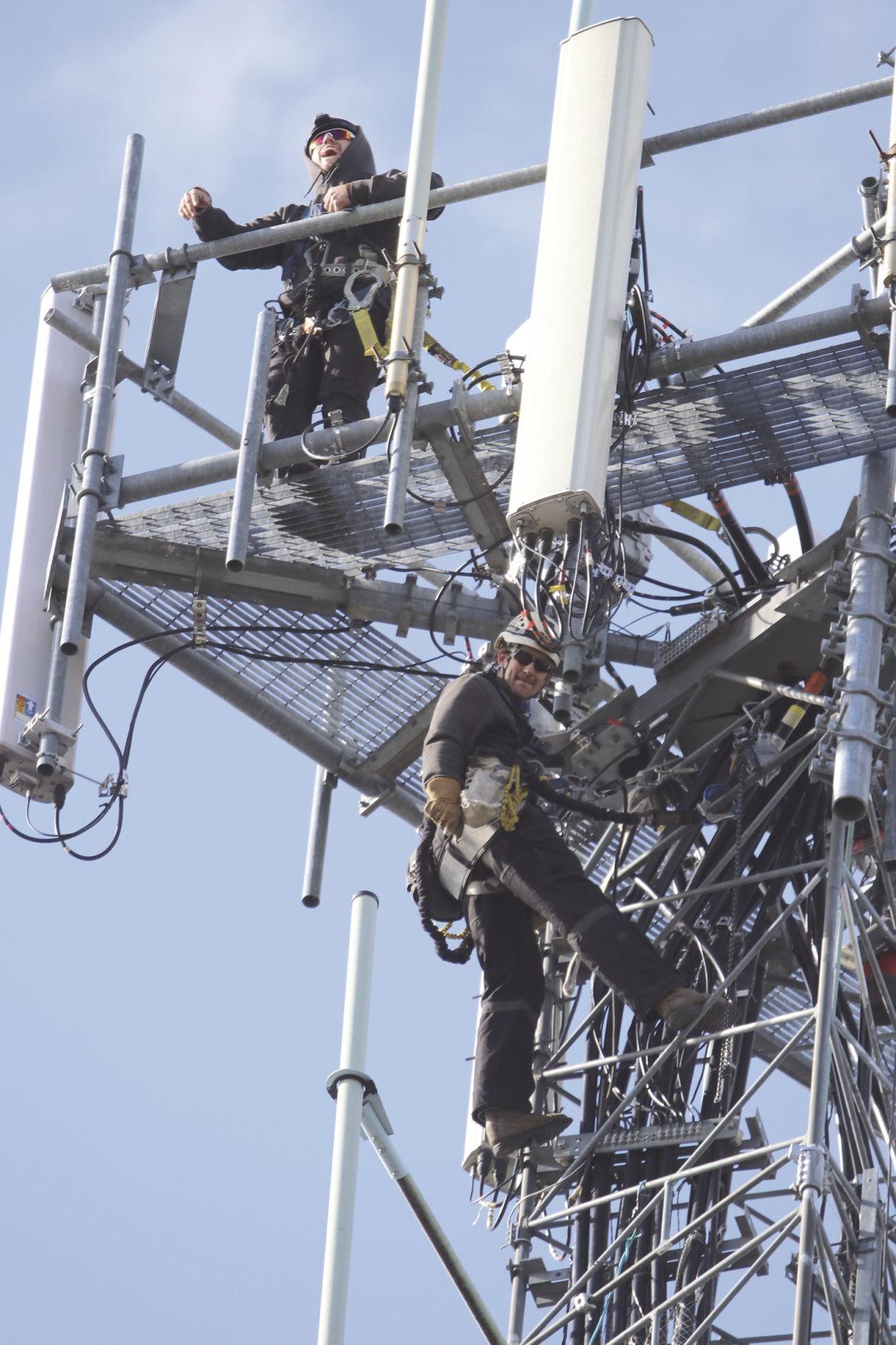 ABOVE: A network device was installed on a communiction tower near Watertown’s Fire Station Friday morning. TOP RIGHT: Tower Technologies LLC employee Jace Lobner gets ready to install a new piece of equipment on the cell tower. RIGHT: Glen Margewich of Tower Technologies of Prairie du Sac installs a network device on Watertown’s communication tower that is 155 feet above the city.

HARTFORD — LifeNet Inc. has announced that part of air medical service provider Air Methods will now be serving the Dodge and Jefferson County areas in cases where medical trauma transports to regional medical centers are needed.

LifeNet Inc, a division of Air Methods, announced that LifeNet 3-2 will now be based at the Hartford Municipal Airport. The new base location will ensure residents in the Hartford region and surrounding areas will have access to air medical services, resulting in quicker response times for emergent and trauma situations.

According to Air Methods, air medical services provide essential and lifesaving services throughout the country.

“During missions, LifeNet’s highly skilled medical teams care for patients with lifesaving interventions,” Air Methods said. “LifeNet crews are trained to provide trauma care after an accident and can administer clot-busting medications that must be given shortly after a major stroke to significantly improve outcomes. With the continued consolidation of hospitals and the trend towards centers with specialized heart or neurological care, the clinical support and speed of missions is critical to giving patients the best possible outcomes.”

The decision to open a base in Hartford comes after an extensive review of the local needs, Air Methods said.

Recognizing the regional growth in this area, Air Methods and local community and hospital leaders identified the need for the additional air medical services.

“We are regularly reviewing the best distribution of our services to support communities with the best possible emergency medical options,” said Sam Nepple, director of Base Integration at Air Methods. “LifeNet’s commitment to this region reflects a desire to always provide citizens with the best opportunity to reach trauma care within the critical golden hour and to help reduce response times during other life-threatening emergencies.”

LifeNet will provide air medical services 24/7/365 to the Hartford region and surrounding communities. The base will be staffed by 12 crew members, including pilots, flight nurses, flight paramedics and mechanics, and it will operate an EC135 helicopter.

“As an in-network provider in Wisconsin with a robust patient advocacy team to help patients navigate post-flight insurance requirements, it is our goal to keep our patients’ out-of-pocket expenses low,” said Lydia Oppen, midwest account executive of Air Methods. “And we do this, unlike many other air medical companies, without ever requiring or asking anyone to purchase air medical memberships, which are both an unnecessary and unregulated expense for any Wisconsin.”

FORT ATKINSON — The U.S. Department of Homeland Security’s Federal Emergency Management Agency and Wisconsin Emergency Management announced Friday that Jefferson County has been awarded $1,530,596 in Pre-Disaster Mitigation funds for the acquisition and demolition of 12 flood-prone properties in the county.

Since the buyout program’s inception in 1995, the county has been able to purchase and raze approximately 100 flood-prone structures, one county official said.

The homes to be dealt with under the latest grant are located in the Rock River and Lake Koshkonong floodplains near Fort Atkinson and will help reduce the community’s flood vulnerability. Upon completion of the project, the lots will be preserved as open space by the Jefferson County Parks Department.

“The Hazard Mitigation Assistance grant programs enable communities to implement critical mitigation measures to reduce or eliminate the risk of loss of life and property,” said Kevin M. Sligh, acting regional administrator, FEMA Region 5. “This project will eliminate future structural losses in Jefferson County by permanently removing these homes from the floodplain, greatly reducing the financial impact on individuals and the community.”

“Floods have the potential to cause widespread losses for communities, putting lives and property at risk every time the water rises,” said Dr. Darrell L. Williams, Wisconsin Emergency Management administrator. “We are grateful to FEMA for helping to fund this important work to safeguard the residents of Jefferson County.”

PDM provides grants to state and local governments to implement long-term hazard mitigation measures. This year marks the end of the PDM program, which will be replaced by the Building Resilient Infrastructure and Communities Program.

Jefferson County Director of Emergency Management Donna Haugom, said Jefferson County has been operating the buyout program for flood prone properties since 1995 and added she is not concerned about the current PDM program coming to an end.

“The BRIC program is very similar to the PDM program, with a couple of larger project opportunities included, so I am not concerned about the adjustment at all,” Haugom said.

Haugom said the buyout program for the vulnerable properties has been of great benefit to the county and its residents, because the homes are torn down and the land returned to its natural state.

“It is to protect people and property by removing it from the flood plain. This allows the land to go back to a natural state, which, in some cases, helps store the excess water,” she said. “The program helps restore and permanently protect these properties, to provide natural habitats and help conserve bio-diversity and also, in some cases, provides community amenities and improves resilience.”

Since the county started the program, according to Haugom, it has acquired and removed more than 100 structures from the flood plain, saving lives and property.

“Buying and removing flood prone structures ensures that they are not damaged by floods in the future,” Haugom said. “For the community’s taxpayers, buyouts also reduce the future public costs to local, state and federal agencies that provide evacuation, emergency shelter and debris removal services. Hazard mitigation attempts to break the cycle of disaster damage, reconstruction and repeated damage.” 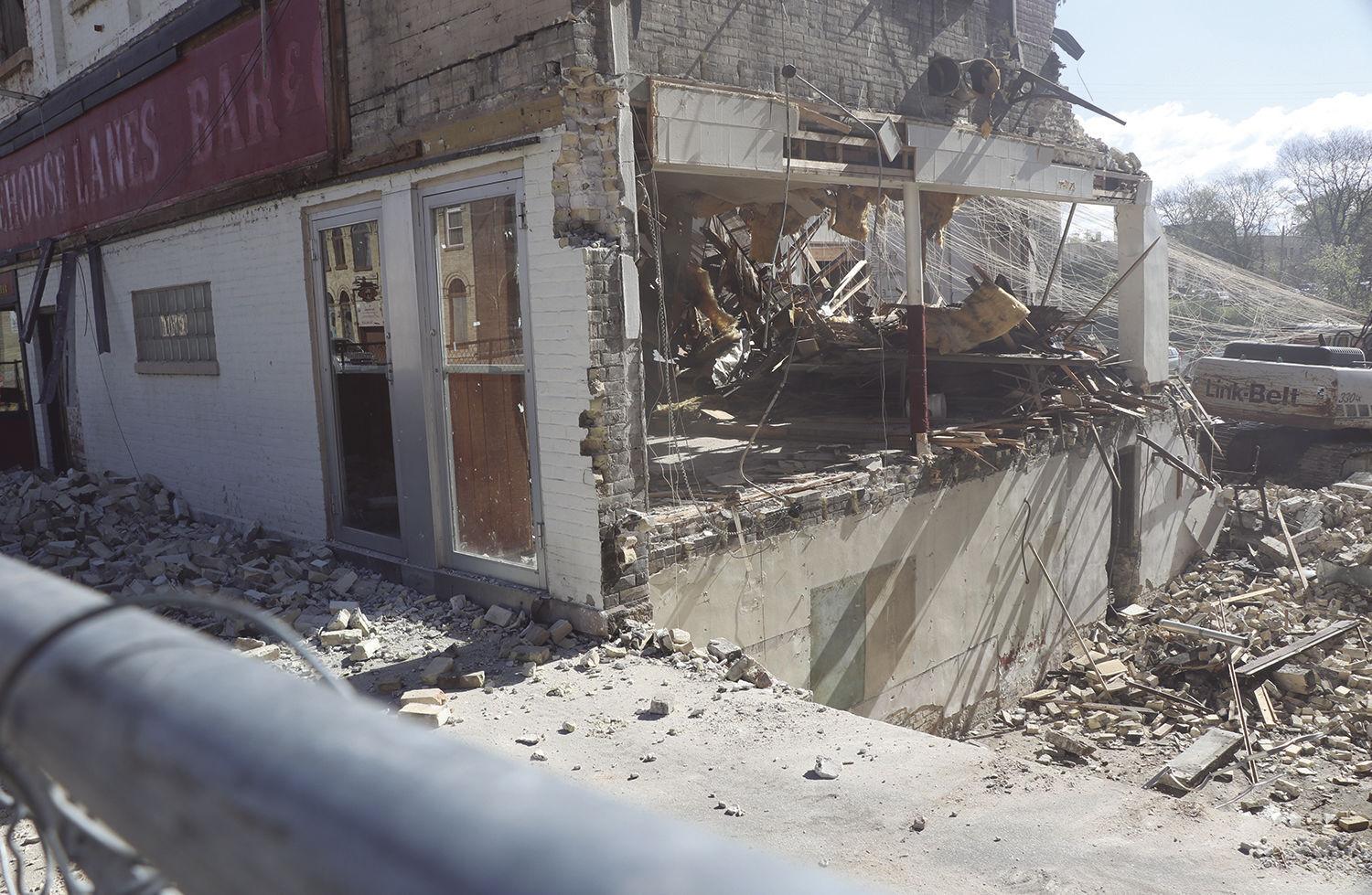 TOP: The former Firehouse Lanes, Bar and Grill at 125 N. Water St., Watertown, was razed Friday morning. The demoliton exposed the six bowling lanes inside the structure. RIGHT: A worker operates a power shovel razing the historic Firehouse Lanes, Bar and Grill Friday morning. Although the building has been vacant for several years after its bowling lanes were closed it was purchased by a group of local investors, who have an eye toward future development. Yet, snags along the way kept the demolition from taking place until recently. 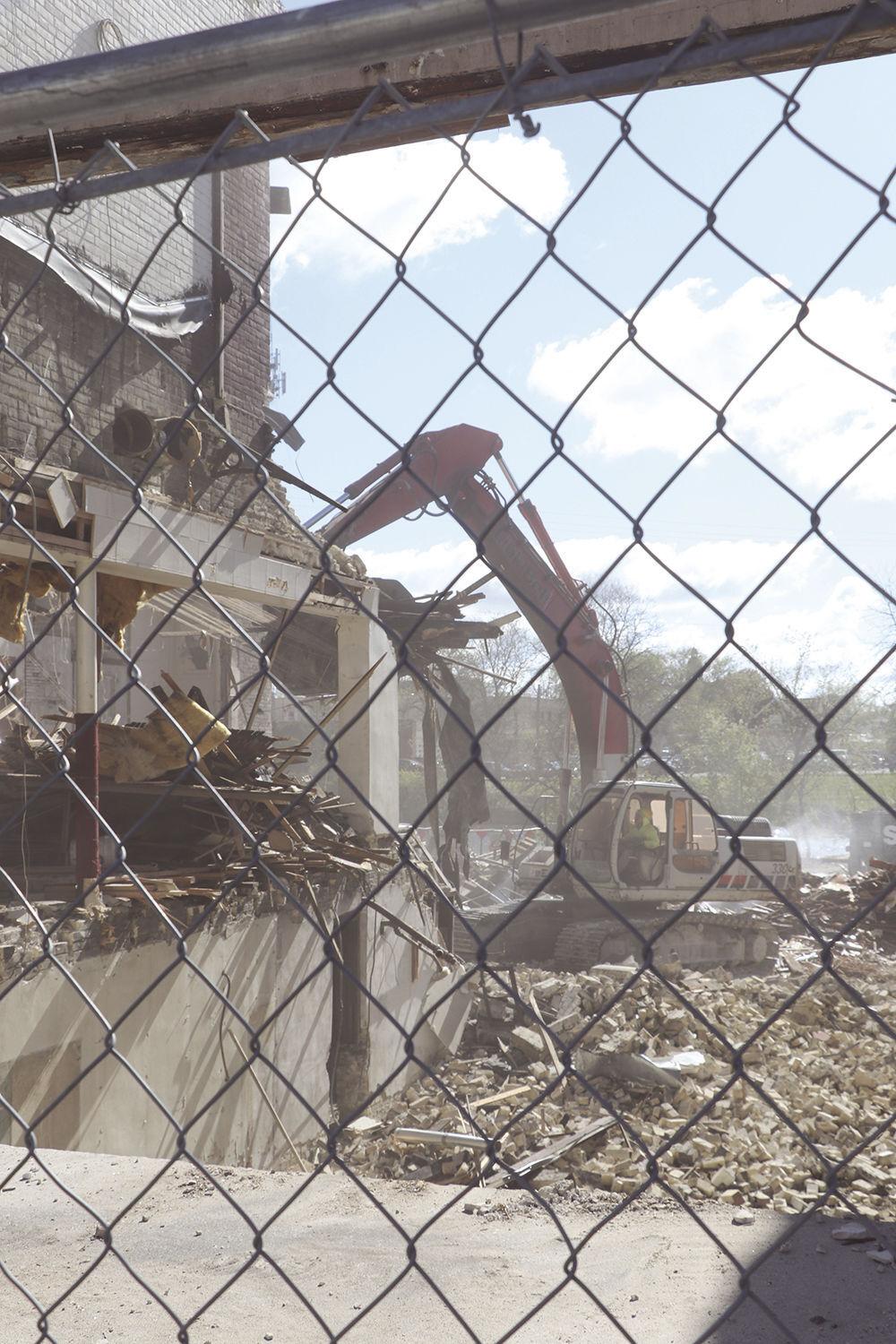 A worker operates a power shovel razing the historic Firehouse Lanes, Bar and Grill Friday morning. The building at 125 N. Water St. has been vacant for several years after the bowling lanes closed.