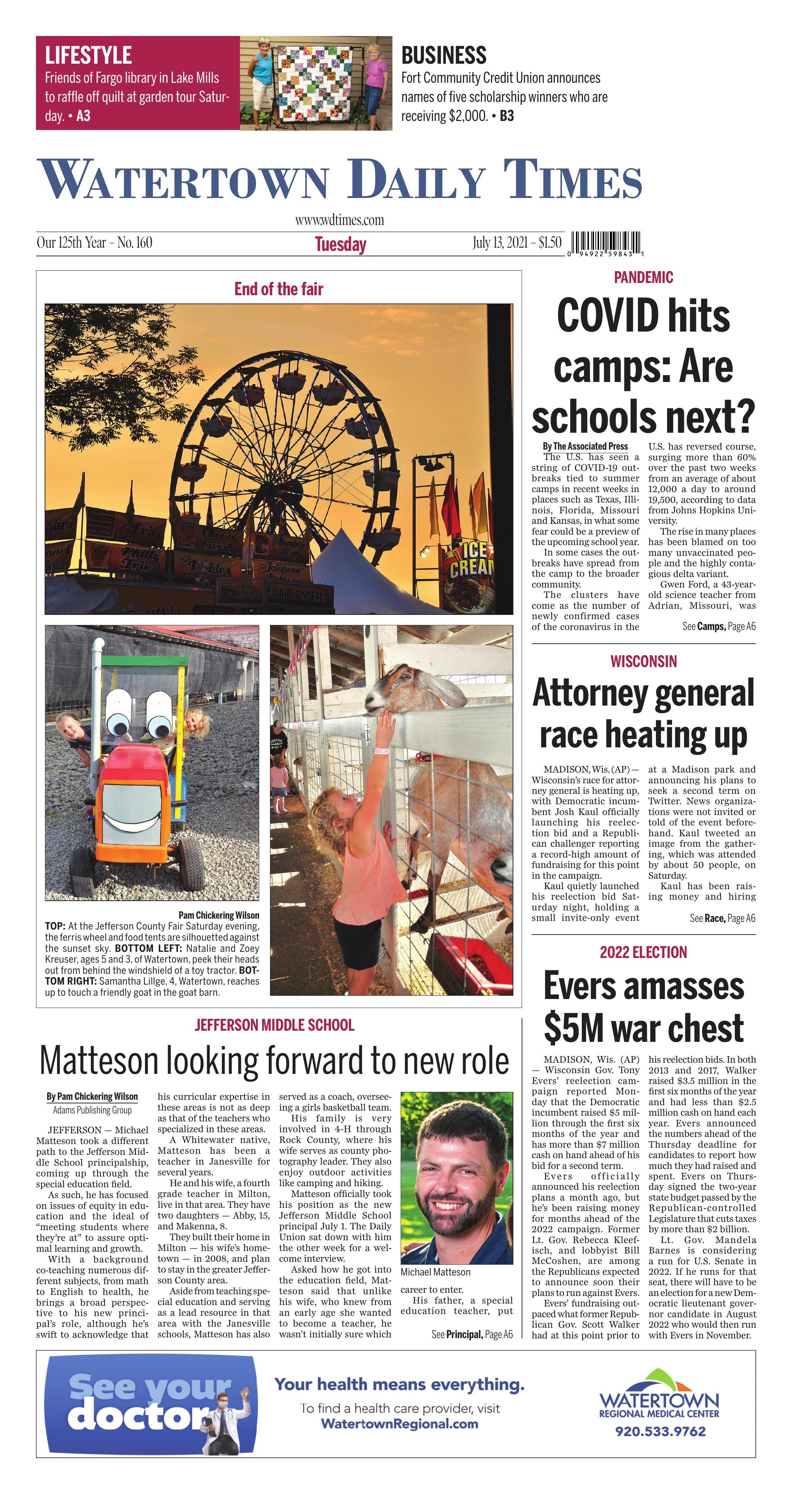 JEFFERSON — Michael Matteson took a different path to the Jefferson Middle School principalship, coming up through the special education field.

As such, he has focused on issues of equity in education and the ideal of “meeting students where they’re at” to assure optimal learning and growth.

With a background co-teaching numerous different subjects, from math to English to health, he brings a broad perspective to his new principal’s role, although he’s swift to acknowledge that his curricular expertise in these areas is not as deep as that of the teachers who specialized in these areas.

A Whitewater native, Matteson has been a teacher in Janesville for several years.

He and his wife, a fourth grade teacher in Milton, live in that area. They have two daughters — Abby, 15, and Makenna, 8.

They built their home in Milton — his wife’s hometown — in 2008, and plan to stay in the greater Jefferson County area.

Aside from teaching special education and serving as a lead resource in that area with the Janesville schools, Matteson has also served as a coach, overseeing a girls basketball team.

His family is very involved in 4-H through Rock County, where his wife serves as county photography leader. They also enjoy outdoor activities like camping and hiking.

Matteson officially took his position as the new Jefferson Middle School principal July 1. The Daily Union sat down with him the other week for a welcome interview.

Asked how he got into the education field, Matteson said that unlike his wife, who knew from an early age she wanted to become a teacher, he wasn’t initially sure which career to enter.

His father, a special education teacher, put in incredible work and showed great caring and compassion for his students. While Matteson didn’t realize it at the time, he learned from his father’s example.

He noted that he was also inspired by some outstanding teachers he had in high school, his English teacher and his automotive teacher, who went the extra mile to support him and help him through challenges.

“When it came to deciding what I was going to do in life, these people’s example made me determined to pay it forward,” the principal said.

Since he had not always been a great student himself, eventually Matteson decided he had a good perspective from which to help young people who were struggling.

So he earned his education degree, graduating from the University of Wisconsin-Whitewater with an emphasis in emotional/behavioral disabilities, and started teaching special education in 2001 in Janesville.

“Some people envision working toward administration from Day 1,” Matteson said. “That wasn’t me. I didn’t imagine being anything but a teacher. But I was fortunate to have mentors who saw something in me I didn’t always see in myself.”

One of Matteson’s principals at Marshall Middle School in Janesville encouraged him to consider entering administration some day.

“That planted a seed,” he said.

As he continued to work in education, Matteson said he benefited from seeing the impact made by his coworkers and administrators, people who were strong leaders and who inspired others.

Among the leaders he looked up to in the Janesville district was Dr. Charles Urness, who has just signed on as Jefferson’s new superintendent.

“I have a lot of respect for Charlie, and it’s really great to be working together in Jefferson,” Matteson said.

While in the Janesville schools, Matteson gradually took on more leadership roles, especially in the realms of special education and equity.

Last year, he took on the role as interim principal at Marshall Middle School, seeing that school through a transition.

It was a tough time for the field in general as educators worldwide struggled to meet student needs during a pandemic that was unprecedented in their lifetimes, all while learning on the fly and accommodating ever-changing health precautions.

“This last year has been full of challenges, but there are positive things we can take out of it as well,” Matteson said. “People have built up a lot of resiliency, working together and doing the best they can under difficult circumstances.”

He said he is looking forward to a more “normal” year in the fall, even though he realizes there will still be a need for some pandemic precautions.

As he becomes acclimated to the Jefferson schools, Matteson said he’ll first seek to understand the systems and traditions that are already in place here before seeking to impose any big changes.

Matteson said that part of what drew him to Jefferson was the district’s sterling reputation in the area and the many good things already taking place here.

He said it’s his goal to be very open accessible during this acclimation process, with a view toward cooperatively building the school’s future.

“I’m excited about the opportunity,” he said. “I think it’s going to be a great fit.”