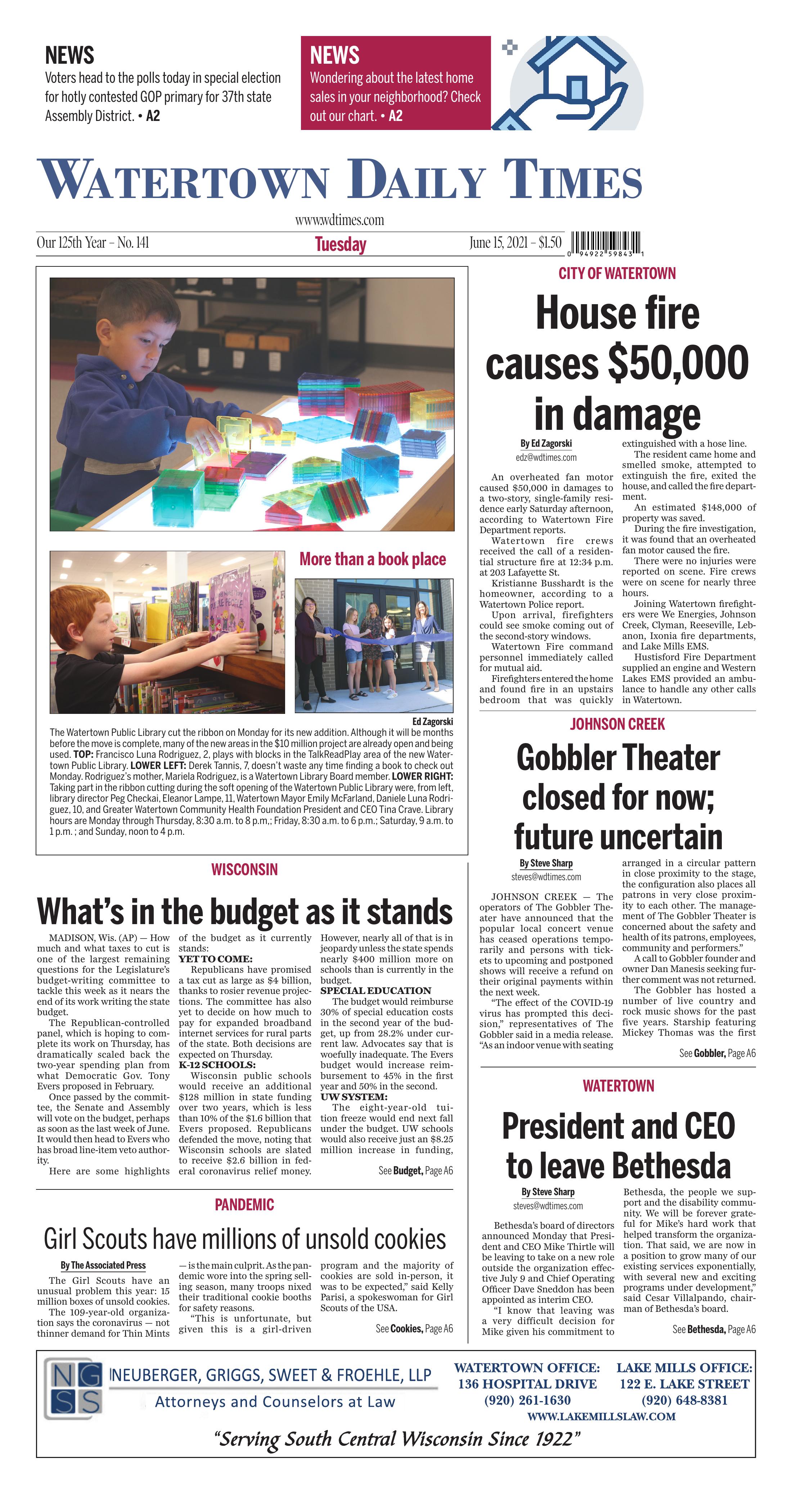 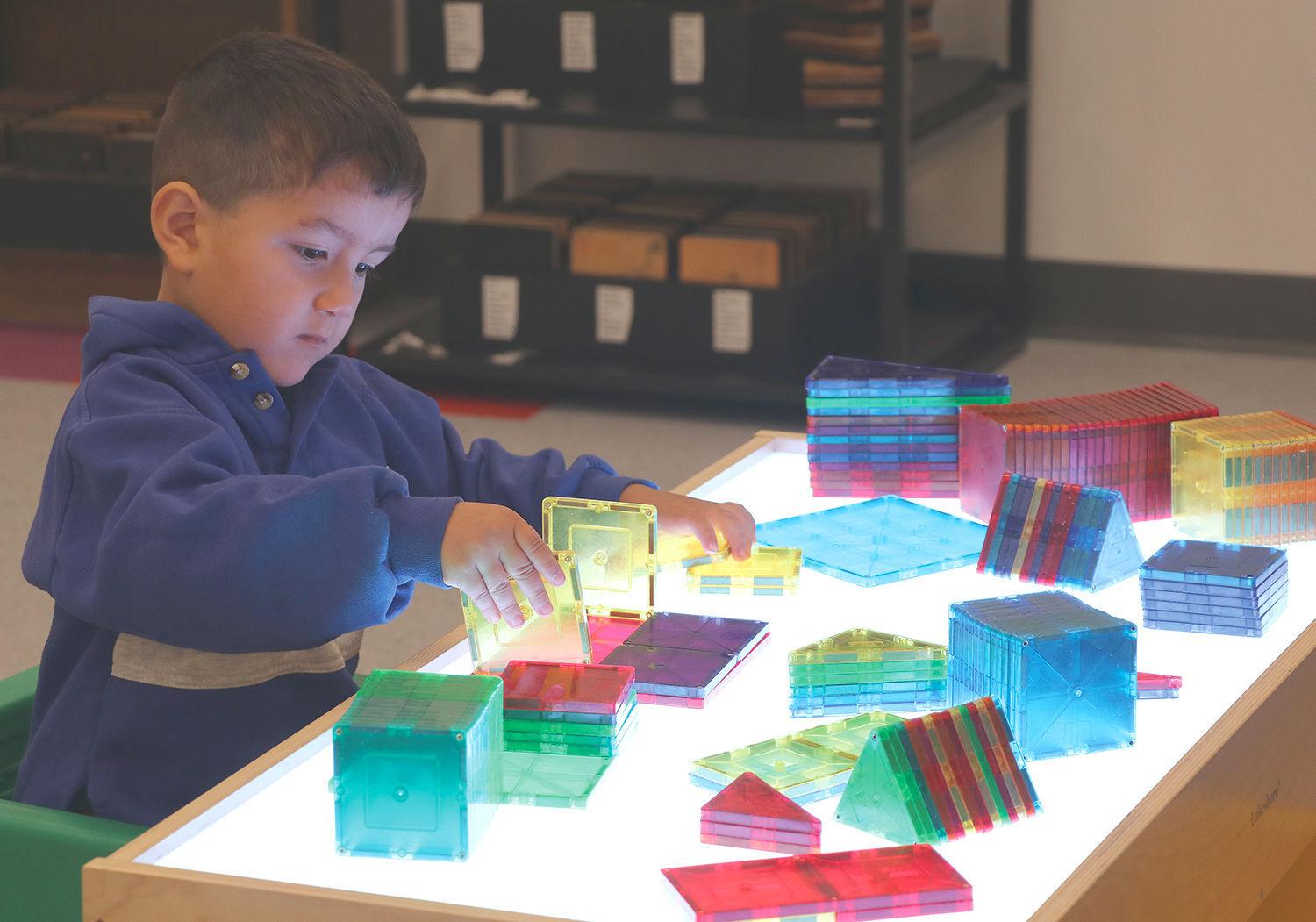 Francisco Luna Rodriguez, 2, plays with blocks in the TalkReadPlay area of the new Watertown Public Library. Rodriguez's mother, Mariela Rodriguez, is a Watertown Library Board member. 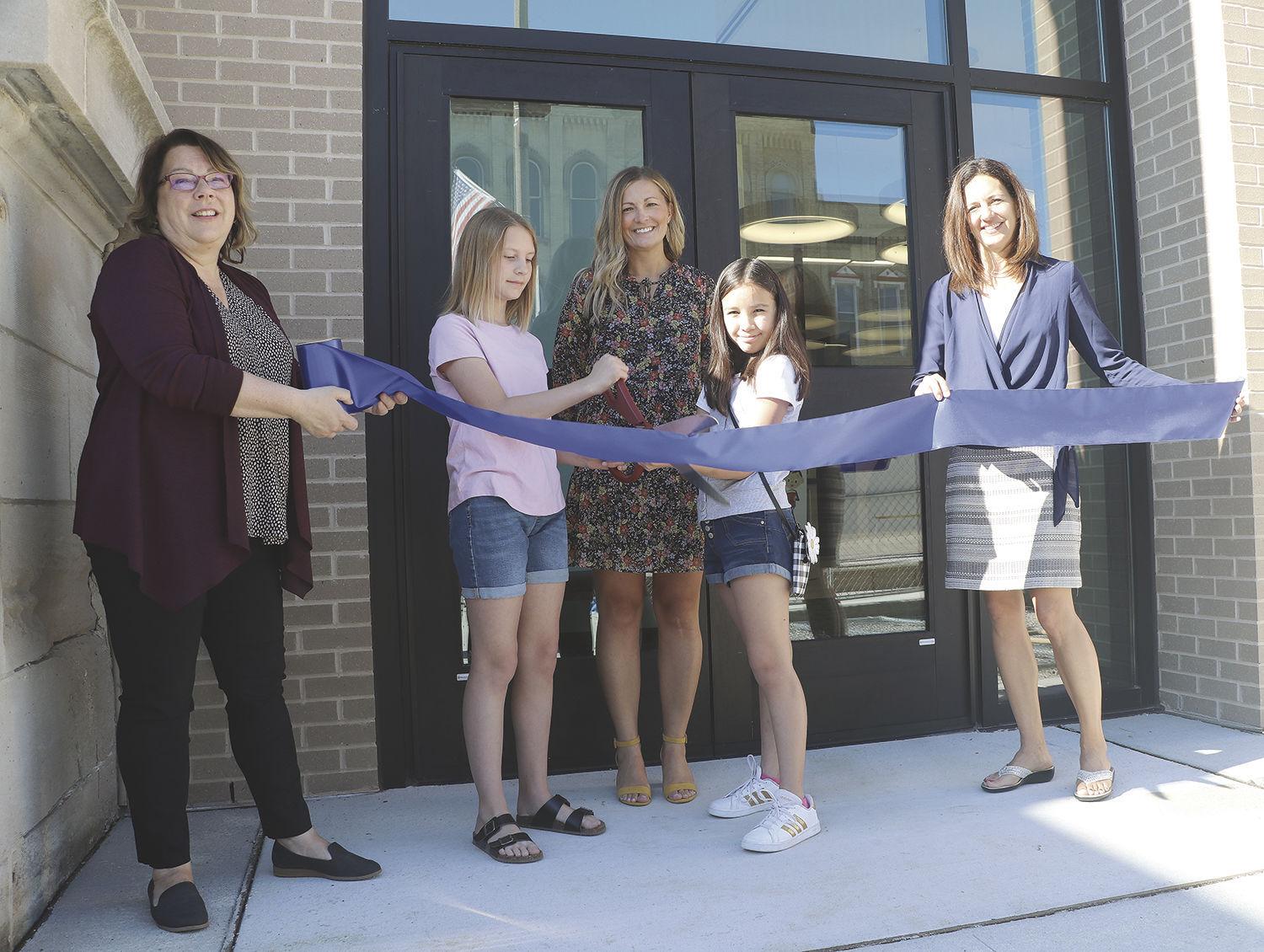 The Watertown Public Library cut the ribbon on Monday for its new addition. Although it will be months before the move is complete, many of the new areas in the $10 million project are already open and being used. TOP: Francisco Luna Rodriguez, 2, plays with blocks in the TalkReadPlay area of the new Watertown Public Library. LOWER LEFT: Derek Tannis, 7, doesn’t waste any time finding a book to check out Monday. Rodriguez’s mother, Mariela Rodriguez, is a Watertown Library Board member. LOWER RIGHT: Taking part in the ribbon cutting during the soft opening of the Watertown Public Library were, from left, library director Peg Checkai, Eleanor Lampe, 11, Watertown Mayor Emily McFarland, Daniele Luna Rodriguez, 10, and Greater Watertown Community Health Foundation President and CEO Tina Crave. Library hours are Monday through Thursday, 8:30 a.m. to 8 p.m,; Friday, 8:30 a.m. to 6 p.m.; Saturday, 9 a.m. to 1 p.m. ; and Sunday, noon to 4 p.m. 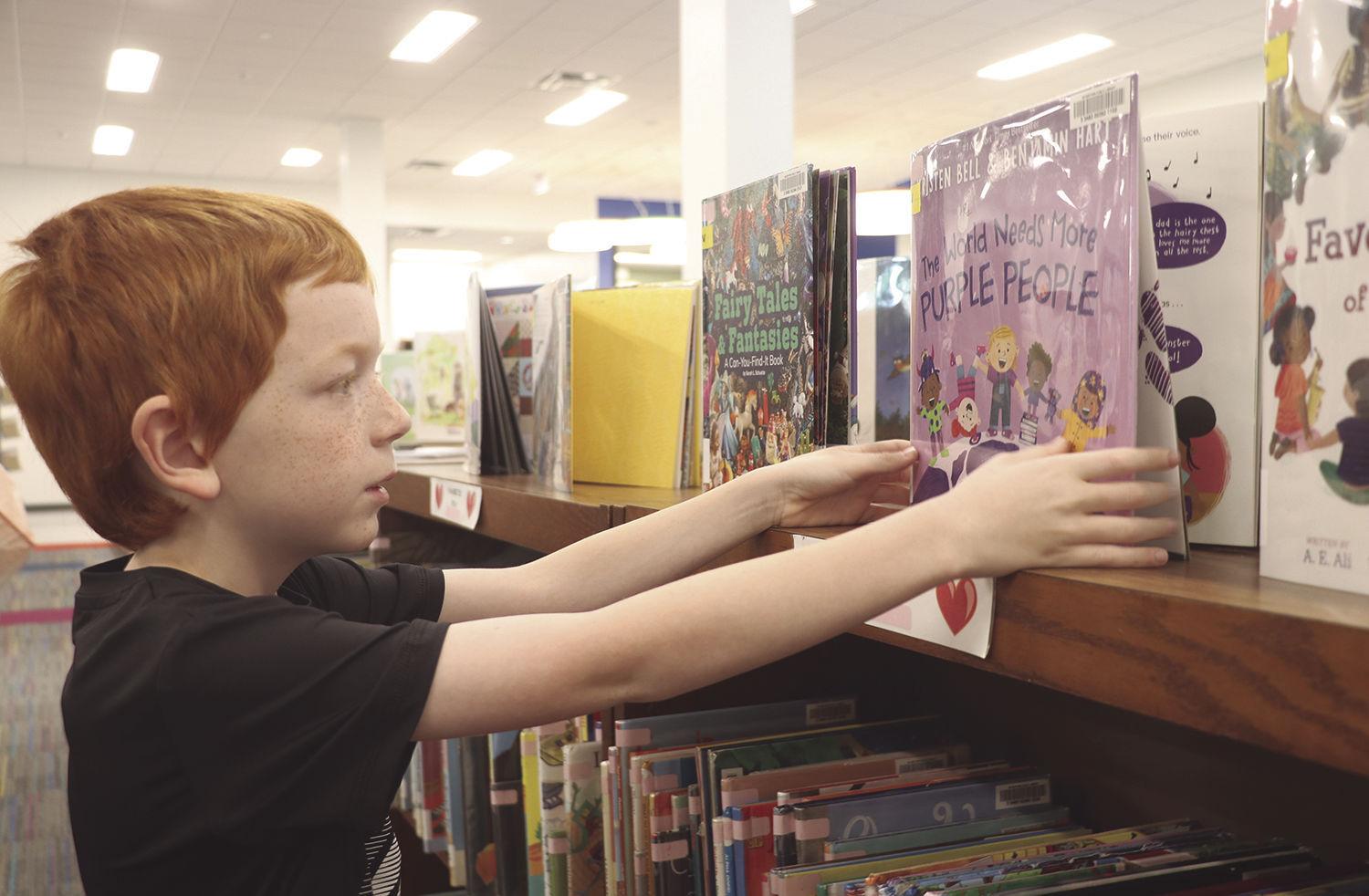 Derek Tannis, 7, doesn't waste any time finding a book to check out Monday.

Editor's note: The story was edited to reflect the correct day.

Watertown fire crews received the call of a residential structure fire at 12:34 p.m. at 203 Lafayette St.

Kristianne Busshardt is the homeowner, according to a Watertown Police report.

Upon arrival, firefighters could see smoke coming out of the second-story windows.

Firefighters entered the home and found fire in an upstairs bedroom that was quickly extinguished with a hose line.

The resident came home and smelled smoke, attempted to extinguish the fire, exited the house, and called the fire department.

During the fire investigation, it was found that an overheated fan motor caused the fire.

There were no injuries were reported on scene. Fire crews were on scene for nearly three hours.

Hustisford Fire Department supplied an engine and Western Lakes EMS provided an ambulance to handle any other calls in Watertown.

The Gobbler Theater in Johnson Creek is shown Monday afternoon. The theater’s management said it has been closed “temporarily” and holders of tickets for previously scheduled shows at the venue will have refunds available in about one week.

JOHNSON CREEK — The operators of The Gobbler Theater have announced that the popular local concert venue has ceased operations temporarily and persons with tickets to upcoming and postponed shows will receive a refund on their original payments within the next week.

“The effect of the COVID-19 virus has prompted this decision,” representatives of The Gobbler said in a media release. “As an indoor venue with seating arranged in a circular pattern in close proximity to the stage, the configuration also places all patrons in very close proximity to each other. The management of The Gobbler Theater is concerned about the safety and health of its patrons, employees, community and performers.”

A call to Gobbler founder and owner Dan Manesis seeking further comment was not returned.

The Gobbler has hosted a number of live country and rock music shows for the past five years. Starship featuring Mickey Thomas was the first professional band to take the stage there on April 24, 2016. A cabaret license for the theater was approved by the Johnson Creek Village Board in late 2015.

The building, itself, which Manesis had remodeled into a state-of-the-art, intimate concert venue, had seen more than a half-dozen owners over the many years it stood just south of Interstate 94 and west of state Highway 26.

At one point, there were plans to make it a restaurant, then a strip club, with all plans failing — until it fell into the hands of Manesis, who envisioned a family friendly location for concerts and comedy shows, which the Gobbler became.

“We would like to thank the community, patrons, artists, agencies and our employees for their understanding,” theater representatives said.

There was no reference by Gobbler Theater representatives to what the future might hold at the venue.

Johnson Creek village officials were disappointed to hear the new of the Gobbler’s troubles.

“While we were saddened, like many, to learn of the Gobbler Theater’s news to temporarily cease operations at this time, we understand the pandemic affected businesses in different ways and sometimes tough decisions are made,” village Administrator Brad Calder said.

“We offer our support to the Gobbler Theater to help in any way we can and look forward to brighter days ahead for them, and all our village businesses.”

Above is a 2021 file photo of one of the last-remaining vestiges of Bethesda in Watertown — it’s corporate offices. The facility remain as Bethesda’s corporate headquarters, albeit with staff reductions. The most recent significant change for Bethesda’s corporate level has been Monday’s announcement that its President and CEO Mike Thirtle is stepping aside.

Bethesda’s board of directors announced Monday that President and CEO Mike Thirtle will be leaving to take on a new role outside the organization effective July 9 and Chief Operating Officer Dave Sneddon has been appointed as interim CEO.

“I know that leaving was a very difficult decision for Mike given his commitment to Bethesda, the people we support and the disability community. We will be forever grateful for Mike’s hard work that helped transform the organization. That said, we are now in a position to grow many of our existing services exponentially, with several new and exciting programs under development,” said Cesar Villalpando, chairman of Bethesda’s board.

“Transforming the organization has meant reimagining its role in supporting people with developmental disabilities,” a media release from Bethesda stated. “Instead of addressing a series of disconnected needs, Bethesda considers and serves the whole person – empowering them to do more today and achieve more tomorrow. This unique approach carries on from childhood through mature adulthood. As having a safe, quality home is a primary concern at any age, Bethesda pioneered a new and innovative residential community that welcomes and integrates people of all abilities — Cornerstone Village. This concept, launched near Minneapolis, is expanding to Milwaukee and further within the Twin Cities. Additional creative living options, including host homes, are expanding in Colorado, California, Oregon and Minnesota. Meanwhile, to meet growing demand and significant need, Bethesda’s behavior support services are rapidly growing in several key markets, and will now include children’s services.”

“The board has full confidence in Dave Sneddon’s ability to successfully step into the interim CEO position and lead the organization through this transition,” Villalpando added.

He said Sneddon joined Bethesda two years ago and, “has already made a tremendous positive impact” on the organization.

“He brings with him more than 16 years of senior leadership experience in health care, senior housing, and skilled nursing,” Villalpando said.

“Led by Chairperson Villalpando, a national search committee has been launched and is comprised of board directors and management,” Bethesda said. “The search committee has developed an aggressive schedule that will lead to identifying the best CEO to lead the organization toward a very bright future.”

This is another big change for Bethesda in recent months.

Saying it was the best of all possible outcomes for everyone concerned, Bethesda announced in April that its residential programs, many in Watertown, had been acquired by Broadstep Behavioral Health Inc., with offices in Milwaukee and other parts of the U.S.

Bethesda Senior Director of Public Affairs Don Klein said it has announced to its employees, parents and guardians that its Watertown residential programs would be acquired by what he called the, “high-quality, mission-driven organization, Broadstep Behavioral Health Inc.”

Klein said Bethesda sought this acquisition after much consideration, because it determined its local, residential operations were no longer sustainable.