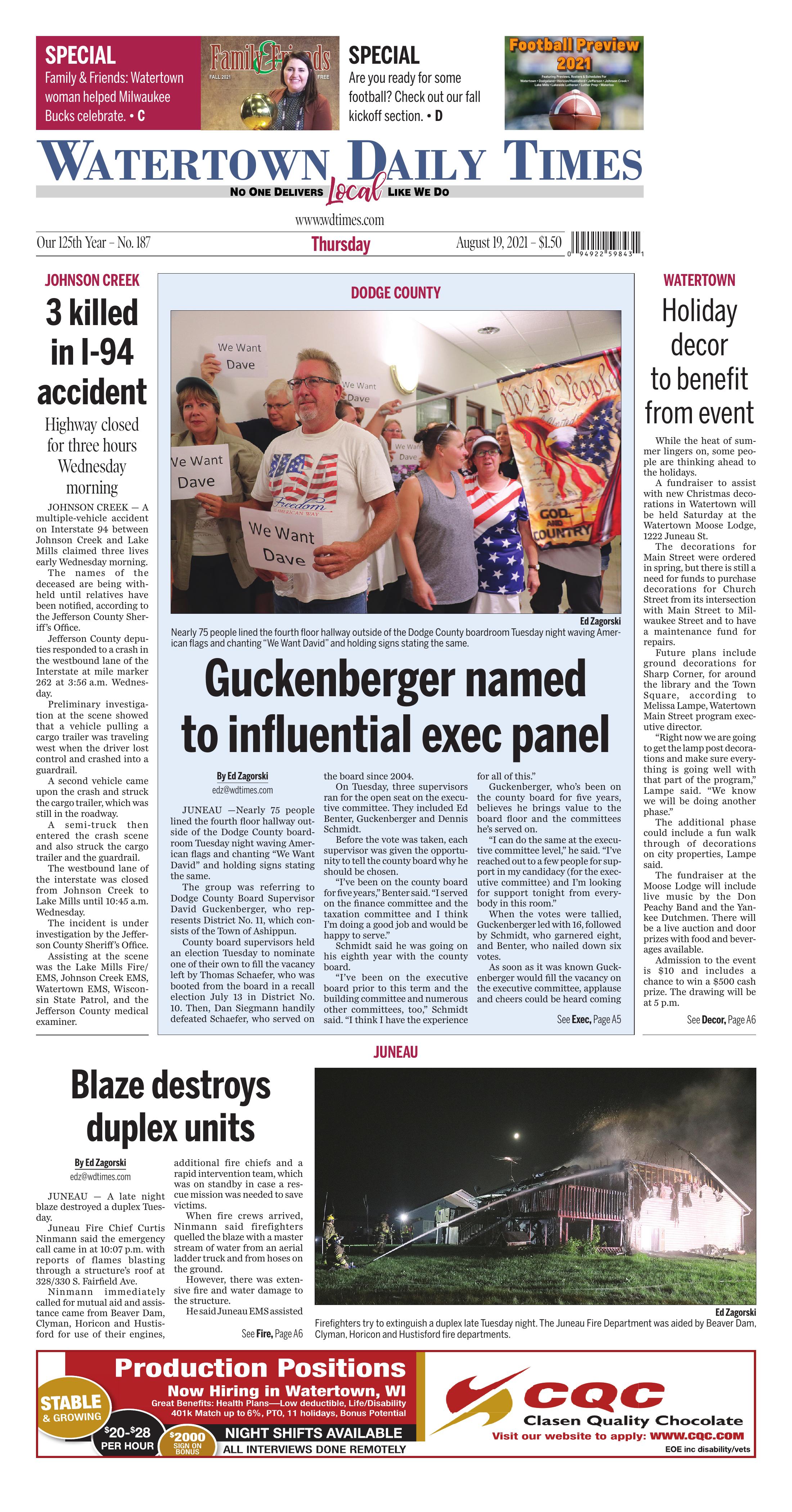 The group was referring to Dodge County Board Supervisor David Guckenberger, who represents District No. 11, which consists of the Town of Ashippun.

County board supervisors held an election Tuesday to nominate one of their own to fill the vacancy left by Thomas Schaefer, who was booted from the board in a recall election July 13 in District No. 10. Then, Dan Siegmann handily defeated Schaefer, who served on the board since 2004.

On Tuesday, three supervisors ran for the open seat on the executive committee. They included Ed Benter, Guckenberger and Dennis Schmidt.

Before the vote was taken, each supervisor was given the opportunity to tell the county board why he should be chosen.

“I’ve been on the county board for five years,” Benter said. “I served on the finance committee and the taxation committee and I think I’m doing a good job and would be happy to serve.”

Schmidt said he was going on his eighth year with the county board.

“I’ve been on the executive board prior to this term and the building committee and numerous other committees, too,” Schmidt said. “I think I have the experience for all of this.”

Guckenberger, who’s been on the county board for five years, believes he brings value to the board floor and the committees he’s served on.

When the votes were tallied, Guckenberger led with 16, followed by Schmidt, who garnered eight, and Benter, who nailed down six votes.

As soon as it was known Guckenberger would fill the vacancy on the executive committee, applause and cheers could be heard coming from the packed hallway outside of the boardroom.

“We do not tolerate disruptions like that,” he said. “It’s not proper procedure, so you’ve been warned.”

The group eventually trickled out of the administration building following the vote.

On Wednesday, Guckenberger said he’s ready to get to work with the committee.

“I want to be more involved with the leadership of the county board,” Guckenberger said.

That body plays a key role in directing county business.

Area firefighters work together to douse a blaze, which destroyed a Juneau duplex Tuesday night. There were no injuries to residents or firefighters.

After a fire, smoke and light pour through a heavily-damaged roof of a duplex at 328/330 S. Fairfield Ave.

Juneau Fire Chief Curtis Ninmann said the emergency call came in at 10:07 p.m. with reports of flames blasting through a structure’s roof at 328/330 S. Fairfield Ave.

Ninmann immediately called for mutual aid and assistance came from Beaver Dam, Clyman, Horicon and Hustisford for use of their engines, additional fire chiefs and a rapid intervention team, which was on standby in case a rescue mission was needed to save victims.

When fire crews arrived, Ninmann said firefighters quelled the blaze with a master stream of water from an aerial ladder truck and from hoses on the ground.

However, there was extensive fire and water damage to the structure.

He said Juneau EMS assisted with the residents and all of the occupants of the duplex were accounted for.

There were no injuries to residents or firefighters reported; and, fire crews cleared the scene at 12:30 a.m.

The cause of the fire remains undetermined.

This is a sample of the new Christmas decorations that will likely be installed later this year on South Church Street. 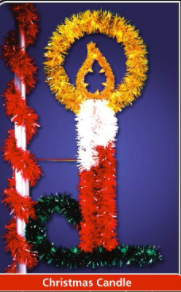 This is a sample of the new Christmas decorations that will likely be installed later this year on South Church Street.

While the heat of summer lingers on, some people are thinking ahead to the holidays.

A fundraiser to assist with new Christmas decorations in Watertown will be held Saturday at the Watertown Moose Lodge, 1222 Juneau St.

Future plans include ground decorations for Sharp Corner, for around the library and the Town Square, according to Melissa Lampe, Watertown Main Street program executive director.

“Right now we are going to get the lamp post decorations and make sure everything is going well with that part of the program,” Lampe said. “We know we will be doing another phase.”

The additional phase could include a fun walk through of decorations on city properties, Lampe said.

The fundraiser at the Moose Lodge will include live music by the Don Peachy Band and the Yankee Dutchmen. There will be a live auction and door prizes with food and beverages available.

The event runs from 1 to 6 p.m. and is sponsored by the Watertown Parade Committee and Emergency Starting and Towing.

The goal is to unveil the new Christmas decorations prior to the annual Christmas Parade of Lights in November. The new decorations will replace the lighted wreathes that have been on display since the decorative poles were installed in the 1990s.

“The decorations are being custom-made by Temple Display, a commercial supplier of Christmas decorations for a lot of municipalities,” Lampe said.

“On Main Street, through downtown, the plan is alternating lamp posts with three different lighted Christmas decorations,” Lampe said. There are three different designs, a snowflake, a poinsettia and a Christmas tree. The lighted decorations will be alternated with banners that read “Seasons Greetings.”

Lampe said the banners are in her office and ready to go. She has not heard of any delays on the lighted decorations.

There will be some type of decoration on the 69 decorative black lampposts in the downtown, Lampe said. “We had to break up with the banners in between because the cost would have been too significant for all lighted decorations.”

Also, there are some electrical issues with the black lamp posts, the main street director said. “Those that we know don’t work will have banners,” she said. Main Street is slated for a full street reconstruction in the next 10 years, she added. When that project is completed, the lamp posts will be taller, raising the decorations.

The size of the lighted decorations was the smallest the company would manufacture, Lampe said.

Because Main and Church streets are state highways, there are limitations on hanging decorations across the street, as was done many years ago.

“So we tried to come up with a beautiful classic solution to have Christmas decorations on the black decorative lamp posts along Main Street and we feel we have made lovely selections,” Lampe said. She, along with Main Street Program board members Sandra Budewitz and Amber Smith made the selections.

Because the poles are taller along Church Street, those decorations will be 5 feet high.

“We have hired electricians to install new weather-resistant outlets to ensure the decorations remain illuminated throughout the Christmas season,” Lampe said. The decorations will have LED bulbs.

“A project like this isn’t possible without the assistance of the city’s Watertown Park and Recreation Department, Lampe said. “They will take care of the hanging and storing of the decorations.

Lampe praised Tom Schultz, who she said was the catalyst who got the project going this year. “We have all known we wanted to replace the Christmas decorations and he stepped up to the plate,” she said. He got many foundations and organizations to donate funds for the new decorations.

“Some people casually mentioned the (old) decorations didn’t look as nice as other cities,” Schultz said. “I wrote a couple of columns (In Times Square) and Melissa called and said they wanted to do this for so long.” Lampe already had the estimates, he added.

“In addition, funds have been raised through online fundraisers for the Main Street Program that have been earmarked for the Christmas decorations,” Lampe said.

“We are excited to get phase one of the decorations up and evaluate what the be use will be to invest in future decorations,” Lampe added.

The names of the deceased are being withheld until relatives have been notified, according to the Jefferson County Sheriff’s Office.

Jefferson County deputies responded to a crash in the westbound lane of the Interstate at mile marker 262 at 3:56 a.m. Wednesday.

Preliminary investigation at the scene showed that a vehicle pulling a cargo trailer was traveling west when the driver lost control and crashed into a guardrail.

A second vehicle came upon the crash and struck the cargo trailer, which was still in the roadway.

A semi-truck then entered the crash scene and also struck the cargo trailer and the guardrail.

The westbound lane of the interstate was closed from Johnson Creek to Lake Mills until 10:45 a.m. Wednesday.

The incident is under investigation by the Jefferson County Sheriff’s Office.