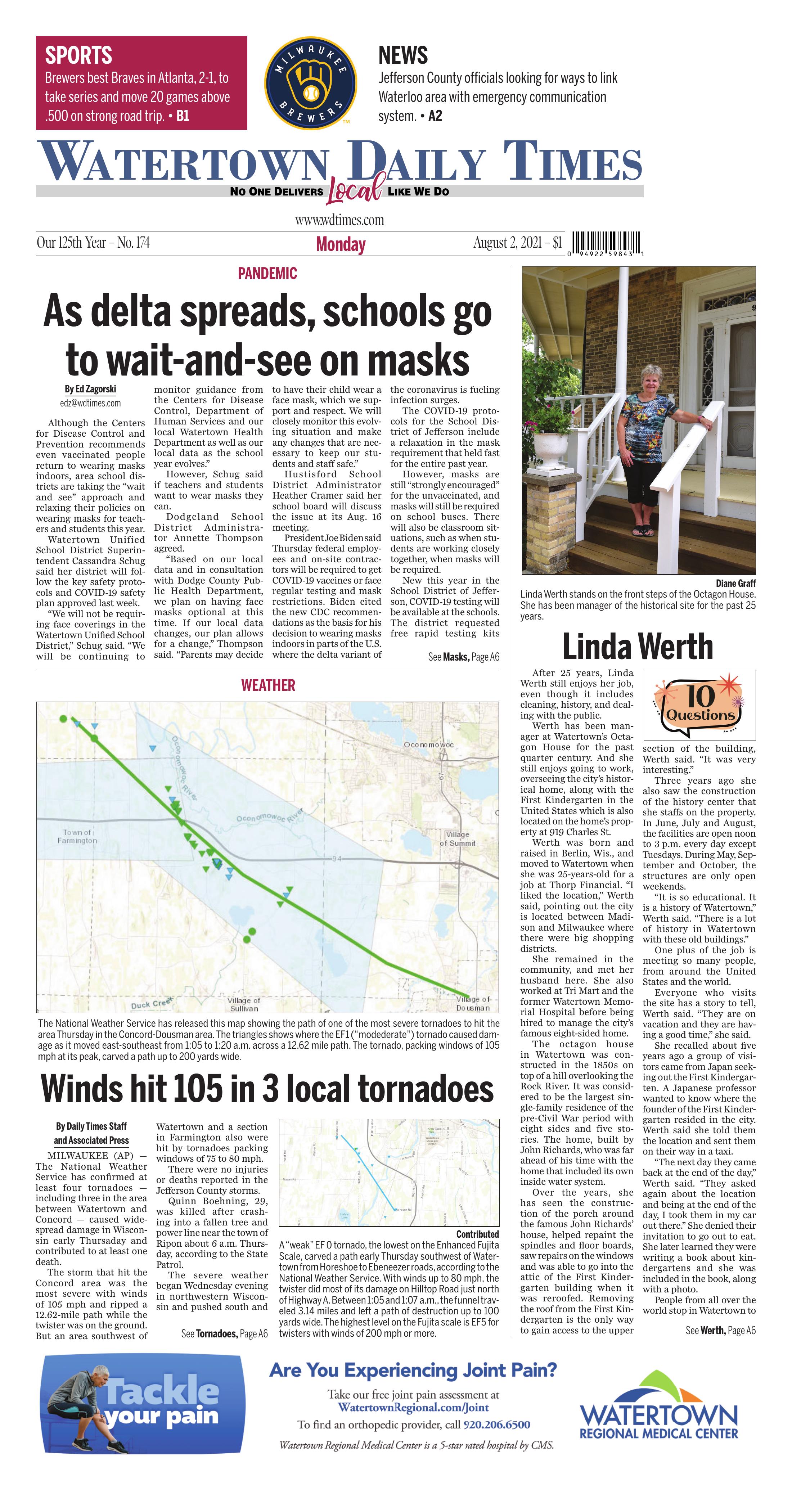 Although the Centers for Disease Control and Prevention recommends even vaccinated people return to wearing masks indoors, area school districts are taking the “wait and see” approach and relaxing their policies on wearing masks for teachers and students this year.

“We will not be requiring face coverings in the Watertown Unified School District,” Schug said. “We will be continuing to monitor guidance from the Centers for Disease Control, Department of Human Services and our local Watertown Health Department as well as our local data as the school year evolves.”

However, Schug said if teachers and students want to wear masks they can.

“Based on our local data and in consultation with Dodge County Public Health Department, we plan on having face masks optional at this time. If our local data changes, our plan allows for a change,” Thompson said. “Parents may decide to have their child wear a face mask, which we support and respect. We will closely monitor this evolving situation and make any changes that are necessary to keep our students and staff safe.”

Hustisford School District Administrator Heather Cramer said her school board will discuss the issue at its Aug. 16 meeting.

President Joe Biden said Thursday federal employees and on-site contractors will be required to get COVID-19 vaccines or face regular testing and mask restrictions. Biden cited the new CDC recommendations as the basis for his decision to wearing masks indoors in parts of the U.S. where the delta variant of the coronavirus is fueling infection surges.

The COVID-19 protocols for the School District of Jefferson include a relaxation in the mask requirement that held fast for the entire past year.

However, masks are still “strongly encouraged” for the unvaccinated, and masks will still be required on school buses. There will also be classroom situations, such as when students are working closely together, when masks will be required.

New this year in the School District of Jefferson, COVID-19 testing will be available at the schools. The district requested free rapid testing kits funded by government grants and will have them available at every school.

However these rapid tests are not the same as the more comprehensive PCR molecular tests, which are required for a symptomatic student to return to school.

Linda Werth stands inside the dining room of the Octagon House.

Linda Werth stands on the front steps of the Octagon House. She has been manager of the historical site for the past 25 years.

After 25 years, Linda Werth still enjoys her job, even though it includes cleaning, history, and dealing with the public.

Werth has been manager at Watertown’s Octagon House for the past quarter century. And she still enjoys going to work, overseeing the city’s historical home, along with the First Kindergarten in the United States which is also located on the home’s property at 919 Charles St.

Werth was born and raised in Berlin, Wis., and moved to Watertown when she was 25-years-old for a job at Thorp Financial. “I liked the location,” Werth said, pointing out the city is located between Madison and Milwaukee where there were big shopping districts.

She remained in the community, and met her husband here. She also worked at Tri Mart and the former Watertown Memorial Hospital before being hired to manage the city’s famous eight-sided home.

The octagon house in Watertown was constructed in the 1850s on top of a hill overlooking the Rock River. It was considered to be the largest single-family residence of the pre-Civil War period with eight sides and five stories. The home, built by John Richards, who was far ahead of his time with the home that included its own inside water system.

Over the years, she has seen the construction of the porch around the famous John Richards’ house, helped repaint the spindles and floor boards, saw repairs on the windows and was able to go into the attic of the First Kindergarten building when it was reroofed. Removing the roof from the First Kindergarten is the only way to gain access to the upper section of the building, Werth said. “It was very interesting.”

Three years ago she also saw the construction of the history center that she staffs on the property. In June, July and August, the facilities are open noon to 3 p.m. every day except Tuesdays. During May, September and October, the structures are only open weekends.

“It is so educational. It is a history of Watertown,” Werth said. “There is a lot of history in Watertown with these old buildings.”

One plus of the job is meeting so many people, from around the United States and the world.

Everyone who visits the site has a story to tell, Werth said. “They are on vacation and they are having a good time,” she said.

“The next day they came back at the end of the day,” Werth said. “They asked again about the location and being at the end of the day, I took them in my car out there.” She denied their invitation to go out to eat. She later learned they were writing a book about kindergartens and she was included in the book, along with a photo.

People from all over the world stop in Watertown to visit the site, Werth said. “We just had someone from Honduras,” she said, noting visitors have also come from Australia, Germany, Italy and Russia.

“We have also had a dog go through the house,” Werth said. A woman was carrying a dog in her bag. The tour guide heard a noise and asked the tourist what she had in her purse.

A rescue dog only made it to the second floor before it got scared and was removed, Werth said.

“We also had a parrot go through on the shoulder of a visitor,” she added.

Werth keeps the home, visitor center and kindergarten clean and ready for all visitors. It takes about a month to clean the five-story home, and then she starts over. She cleans it from the basement to the cupola.

“I love my job,” Werth said about the home she takes pride in.

Following are her answers to 10 questions.

1. What person in history would you most like to meet and why? John Richards — What life was like in the 1830s and why he chose Watertown to build the Octagon House. I have been here 25 years and we have a lot to talk about!

2. What do you enjoy doing in your spare time? Spending time with grandsons, gardening, biking and walking.

3. Why do you enjoy history? We are making history every day, antiques.

4. What is your favorite flavor ice cream? What about toppings? All of them — too hard to choose No toppings.

5. The last time you were at the grocery store, what did you buy that was not on the list? Dark chocolate, yum!

6. In school, who was your favorite teacher and what was the subject? Bookkeeping — love to crunch numbers.

7. What was your favorite pet? Horse, I had one who lived until 40!

9. Sandals or flip-flops, which do you enjoy wearing more? Sandals, better for your feet.

10. What is your favorite season (summer, fall, winter, spring) and why? Spring, everything comes back to life.