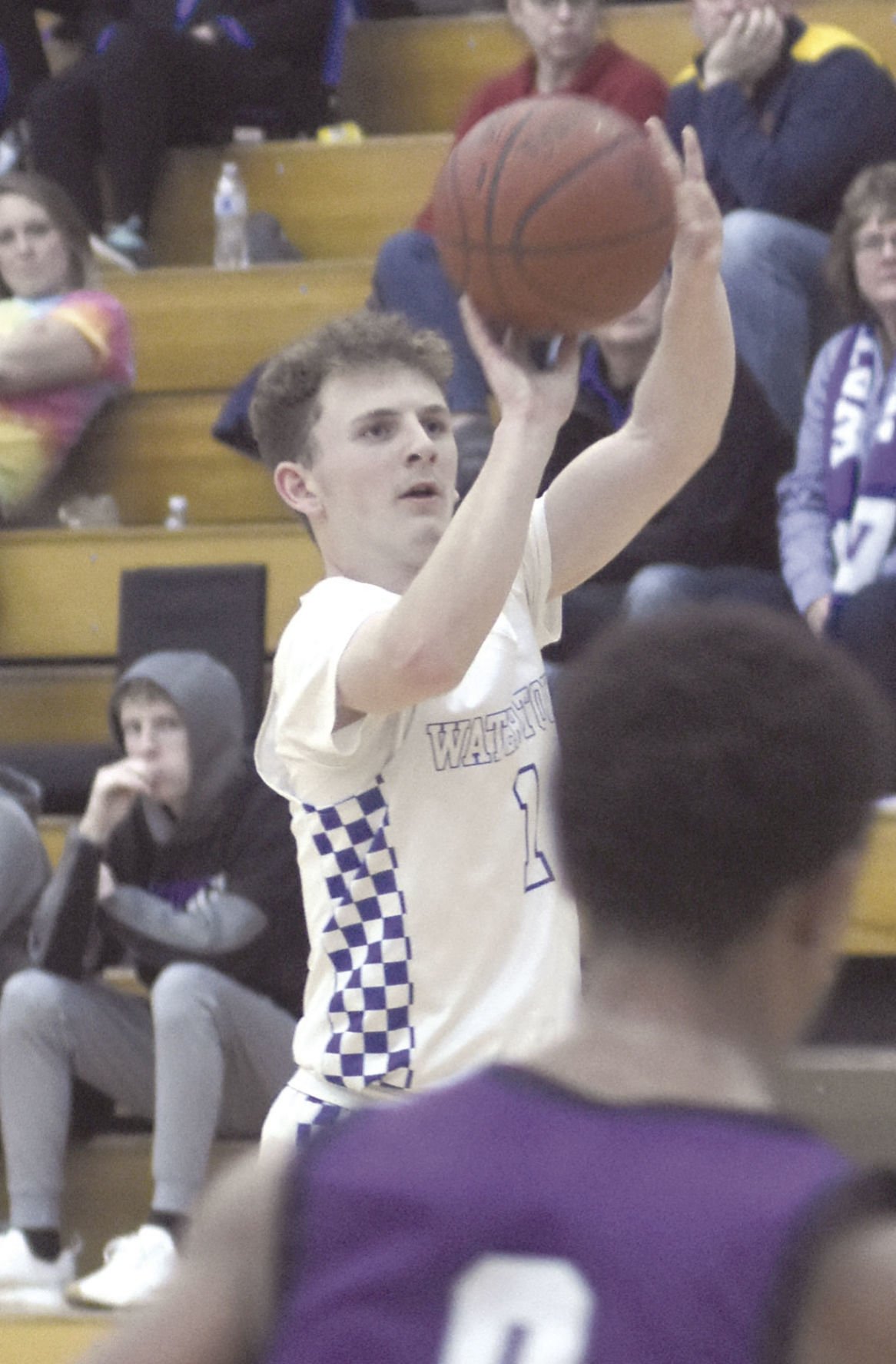 Watertown senior point guard Cade Oiler lets fly from 5 feet beyond the arc during the second half of a Badger South boys basketball game against Stoughton Friday at WHS. Oiler hit four 3s and scored 23 points to lead the Goslings to a 48-46 victory. 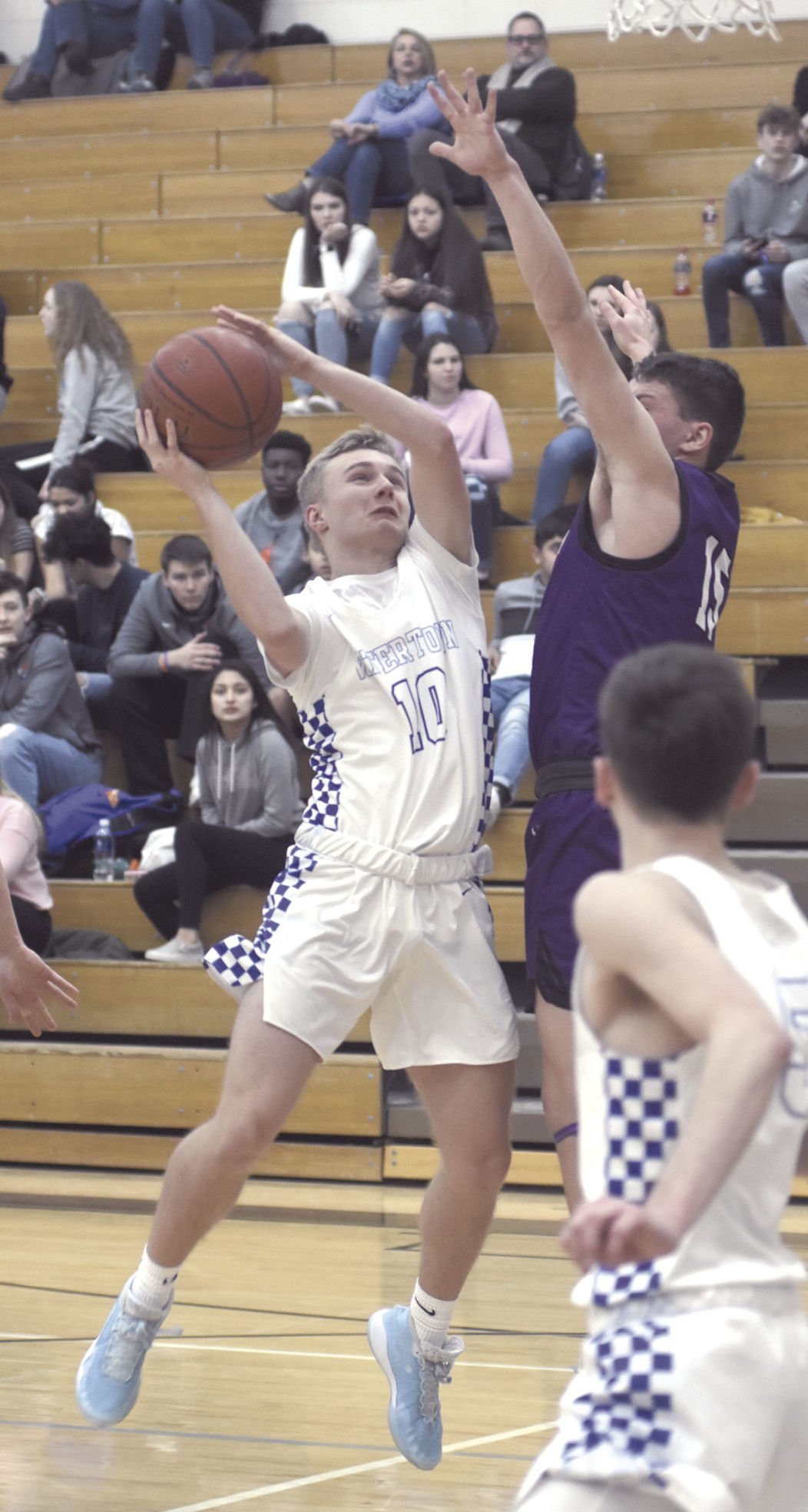 Watertown junior Jackson Wehner attacks in the lane during a Badger South boys basketball game against Stoughton on Friday at WHS. The Goslings upset the Vikings 48-46.

Watertown senior guard Kory Stas knocks a 3-pointer in the second half of a Badger South boys basketball game against Stoughton on Friday at WHS. Watertown won 48-46.

Watertown senior point guard Cade Oiler lets fly from 5 feet beyond the arc during the second half of a Badger South boys basketball game against Stoughton Friday at WHS. Oiler hit four 3s and scored 23 points to lead the Goslings to a 48-46 victory.

Watertown junior Jackson Wehner attacks in the lane during a Badger South boys basketball game against Stoughton on Friday at WHS. The Goslings upset the Vikings 48-46.

Watertown senior guard Kory Stas knocks a 3-pointer in the second half of a Badger South boys basketball game against Stoughton on Friday at WHS. Watertown won 48-46.

Even with its two 6-foot-6 bigs out with the flu, Stoughton figured to be a tall order for Watertown.

The Vikings still had 6-4 senior Adam Hobson and 6-2 junior Cael McGee, and both averaged more than 16 points per game entering Friday’s game at WHS.

Hobson closed out a 25-point performance by drilling a 3-pointer with 1.7 seconds remaining, but the shot was meaningless.

That’s because Watertown senior point guard Cade Oiler dropped 23 on the Vikings, and senior guard Payton Foltz had just iced the game on the other end with two free throws with five seconds to go to make it a five-point game. The Goslings let Hobson hit his 3, then let the clock expire and celebrated a 48-46 Badger South upset which dropped the Vikings into a first place tie with Monroe atop the league standings with three games remaining.

“That was an awesome team win,” Watertown boys basketball coach Travis Moulton said. “They were missing their two big guys (Reece Sproul and Barrett Nelson), out with the flu. They are ranked third in D2 and were 16-2 for a reason. I thought we did a real good job defensively on Cael McGee. He scored nine, so seven under his average.”

Stoughton (16-3, 9-2 in conference) opened the game with a pair of 3-pointers and hit six in the first half. Hobson scored 15 of his points in the opening frame for the Vikings, who led 24-12 at one point. Watertown (11-8, 7-4 in conference) trimmed the lead to 29-23 by halftime behind 10 points from Oiler and five more from senior guard Derek Rowedder.

Oiler was just getting warmed up, as it turned out.

He capped Watertown’s 6-0 run to open the second half with a tough jumper with a hand in his face to tie the game at 29-29 with 16:09 remaining. He would hit four more shots down the stretch from different spots on the floor to keep the game tight. His last three baskets were triples, and the last two were wide open, mainly because he let fly from five feet beyond the arc. One of them tied the game at 37-37 with 9:39 remaining. The other one, from the right elbow, snapped a 41-41 tie with 4:07 left and put the Goslings in front for good.

“During warmups, a lot of shots were going in, so I was thinking, hopefully I can get it going during the game,” Oiler said. “Just spacing them out like that, being able to hit them, it’s pretty nice.”

Senior guards Deon Nailing (seven points) and Kory Stas (five) each hit a timely open 3 from the right wing in the second half. With Watertown protecting a one-point lead with two minutes to go, the Goslings attacked out of a time out with Nailing curling in off a short pass from Oiler for a layup to make it 46-43 with 1:28 remaining.

Hobson hurt the Goslings with perimeter shooting and filthy perimeter moves worthy of an elite stretch player. But he missed three times down the stretch, including a wide open 3 from the left elbow which would have tied the game. Foltz secured the rebound, then hit both ends of the bonus to lock this one up.

“Hobson is just a ridiculously good basketball player, completely under control at all times,” Moulton said. “He can score at all three levels. We were running multiple guys at him. He’s so patient and just waits for his good look. We struggled with him, so kudos to him. During the time out (when Stoughton had the ball down 3 with 17 seconds left), we told the guys, let’s just leave Hobson wide open, to take a wide open 3. We were switching everything, and we didn’t switch, so that was a breakdown on our part, but luckily, he came up short.”

The Goslings upset Stoughton on the road late last year, and Moulton pointed that out after his team won at Monona Grove on Tuesday. They did it again to notch their sixth home win of the season, doubling last year’s total.

“Matching up, it’s a tough matchup, just because of their length, but they were missing some of their big guys and we took advantage of that,” Oiler said. “We rebounded well at the end when we needed to. (We’ve won) four in a row. We’ve had some impressive wins the last two games. We’ve just got to keep it rolling.”

“They threw a lot of defenses at us,” Moulton said. “They played 1-3-1, they played 2-3. I thought we did a good job of adjusting. We got good looks in the first half. We just didn’t make shots. Cade took over in the second.

“Cade was phenomenal. That was a pretty special performance. I thought Jackson Wehner played a lot of minutes and played really good defense. We rebounded well at the end. They had a stretch in the first half and part of the second where they kind of killed us on the boards, but we cleaned that up as the game went on. We took care of the ball, too, with eight turnovers for the game. For us, that’s a really good number. All in all, just proud of the guys. That’s four in a row.”

“Milton will be a big one,” Moulton said. “They have a couple fantastic guards. If we could get to five in a row before the seeding meeting, and be 12-8, that would be a positive thing.”