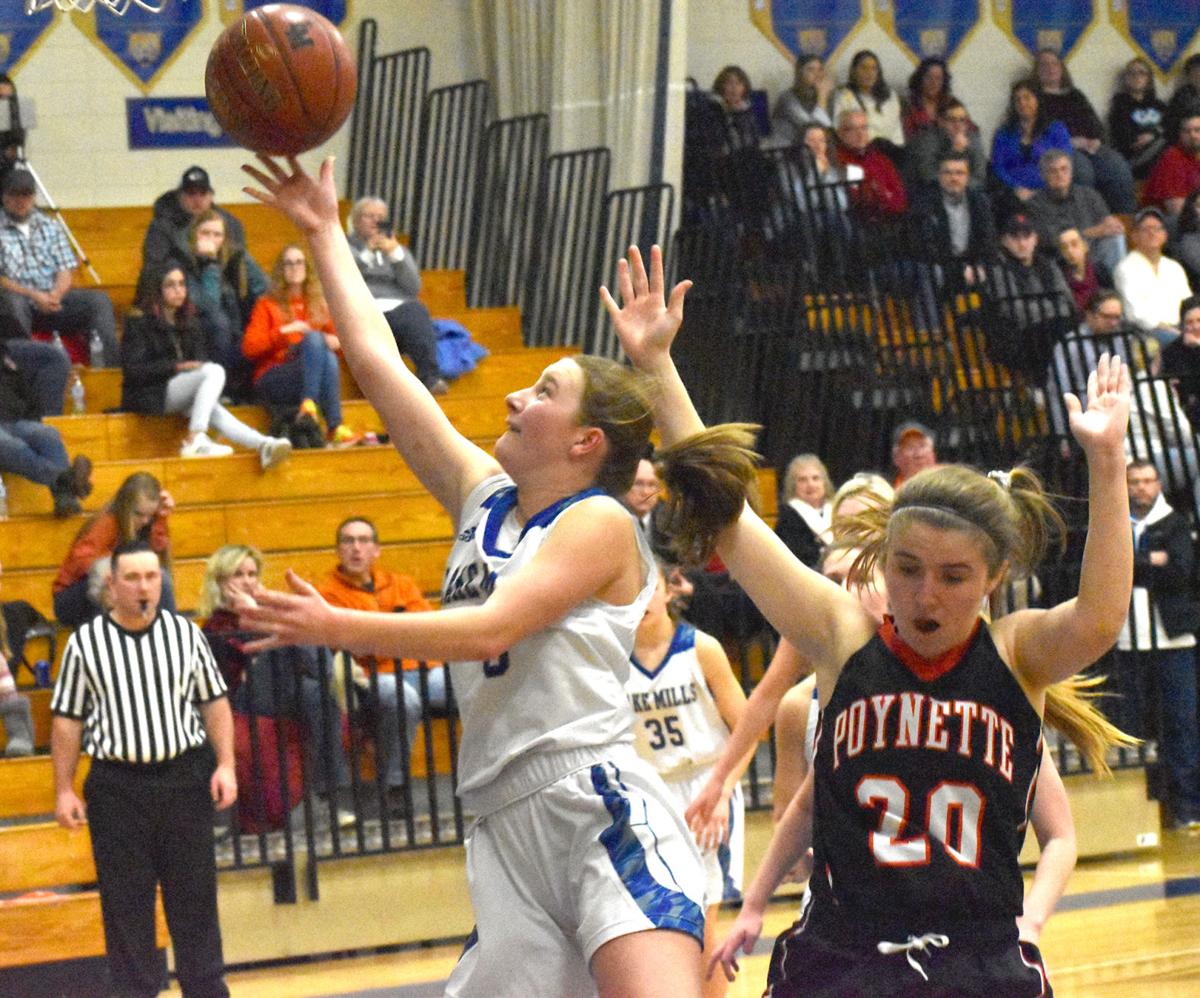 Lake Mills junior guard Julianna Wagner shoots a layup with Poynette junior forward Sydney Small defending during the second half of a Capitol North game at LMHS on Friday. Wagner scored a game-high 16 points in the L-Cats' 66-45 victory. 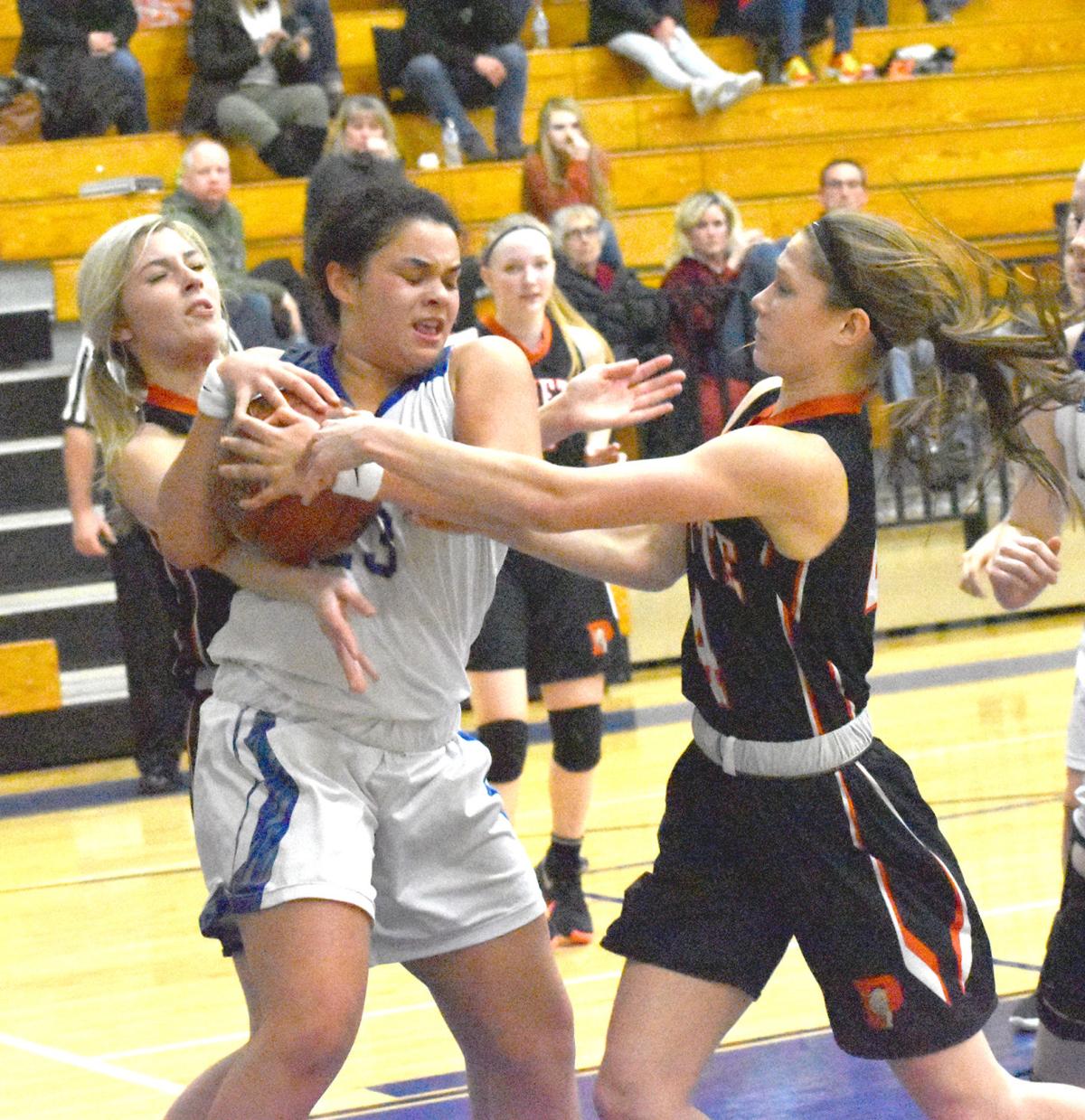 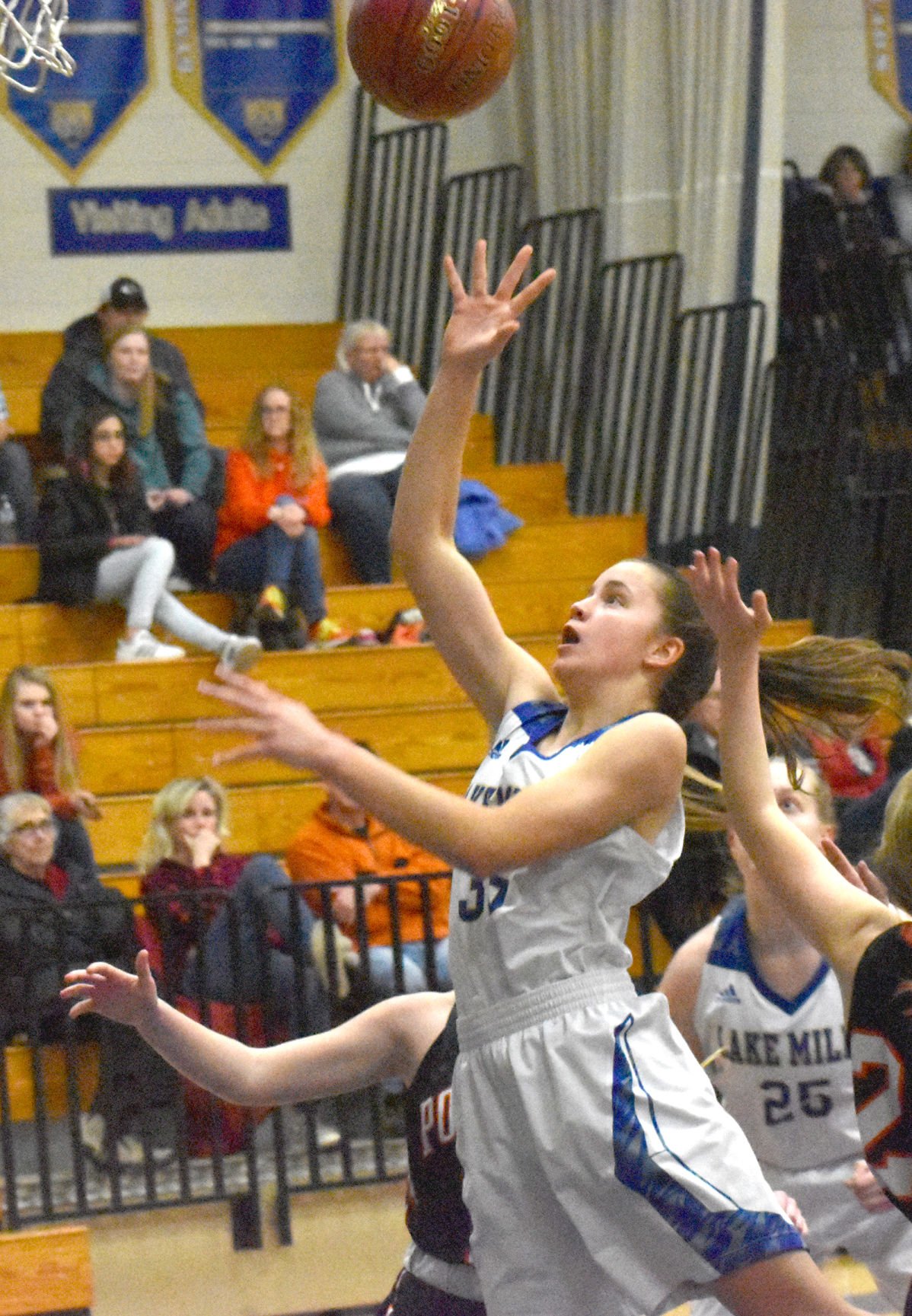 Lake Mills junior guard Ava Wollin shoots a floater during the second half of a Capitol North game against Poynette at LMHS on Friday. Wollin scored three points in the L-Cats' 66-45 victory.

Lake Mills junior guard Julianna Wagner shoots a layup with Poynette junior forward Sydney Small defending during the second half of a Capitol North game at LMHS on Friday. Wagner scored a game-high 16 points in the L-Cats' 66-45 victory.

Lake Mills junior guard Ava Wollin shoots a floater during the second half of a Capitol North game against Poynette at LMHS on Friday. Wollin scored three points in the L-Cats' 66-45 victory.

Before the season, they weren't sure whether the opportunity would even arise this season or potentially next with a senior-laden team.

"It feels really good to show how much we have improved over the past couple of years," junior point guard Julianna Wagner said. "We just hope that we can keep building on it. Once we are gone, the future players can keep building it."

"In the preseason, we had talked about breaking the wins record at some point," Lake Mills girls basketball coach Brandon Siska added. "Wasn't sure really if we'd be able to do it in the regular season, but to do it with another game left before the playoff starts is pretty exciting. That isn't our main goal, we know we need to continue getting better over the next two weeks before the playoffs start. We have other bigger goals in mind."

The Associated Press Division 3 second-ranked L-Cats have won nine straight, eight of which have by double figures. The team ends the regular season at Lodi on Thursday and earned a top seed in the WIAA Division 3 playoffs.

"The team chemistry is great. They are coachable and come to work everyday," Siska said of a team that has nine juniors and one sophomore. "The past two offseasons they have really worked hard in the weight room, shooting and working on skill work everyday. This started more so back in April when they were in the weight room together when everyone else was sleeping. You build team chemistry when your teammates are working hard. You can see that paying off now. We are very unselfish. They are more worried about the success of the team than the individual stats."

Wagner led the way on this night, connecting on four 3-pointers against Poynette's zone defense to finish with 16 points. Junior center Vivian Guerrero added 13 and junior guard Taylor Roughen had 12, making three 3s, as the L-Cats (20-1, 9-0 in conference) led 40-23 at the break.

"We played well defensively, hit a bunch of shots and ran our zone offense well," Siska said. "It was great team basketball tonight. Defensively we came out and played great effort and intensity. In the second half of the season, since the Platteville loss (on Jan. 4), we changed our pregame routine and that's been working. We've been coming out fired up, ready to play."

Wagner made a 3-pointer and Guerrero finished off a 3-point play, pushing the lead to 51-33 with 13 minutes, 30 seconds left.

Junior guard Hannah Lamke hit a 3 on an assist by Roughen before dishing to junior guard Ava Wollin for another 3, extending the advantage to 62-35 with 6:30 left.

The L-Cats are playing well, but there's a sense it could get even better.

"We have gotten close to playing our best basketball, but I think we still have improvements we can make," Wagner said. "Once we get there, it is going to be awesome."

Lake Mills plays one time before a regional semifinal at home on Friday, Feb. 28, allowing ample time to practice, and continue the work that began last spring.

"Our work ethic and how hard we work," Wagner said of what has gotten the team to this point. "In every practice we push each other as hard as we can go. We know where we want to be and we work hard to get there."