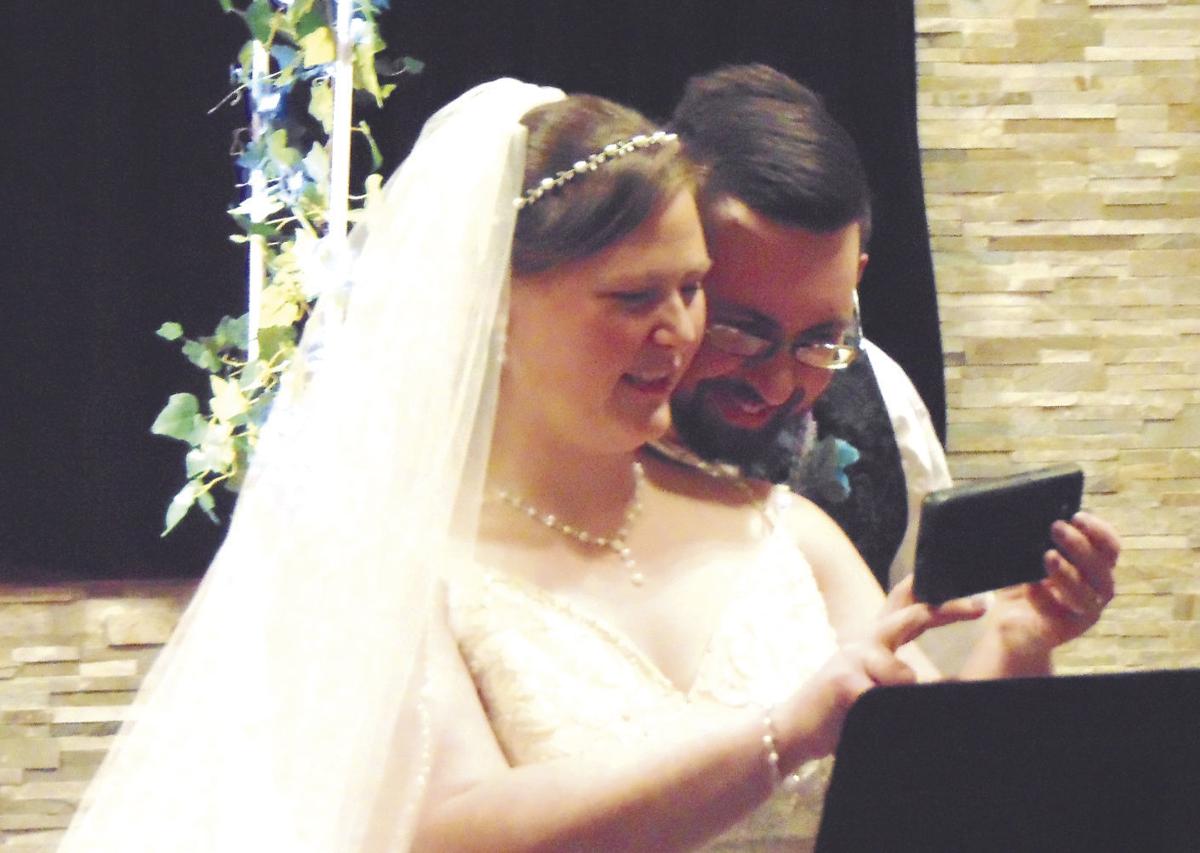 Heather Riley and Jared Osborn at their wedding on March 18 at First Baptist Church in Watertown. The pair live streamed the downsized gathering so family and friends could still take part. 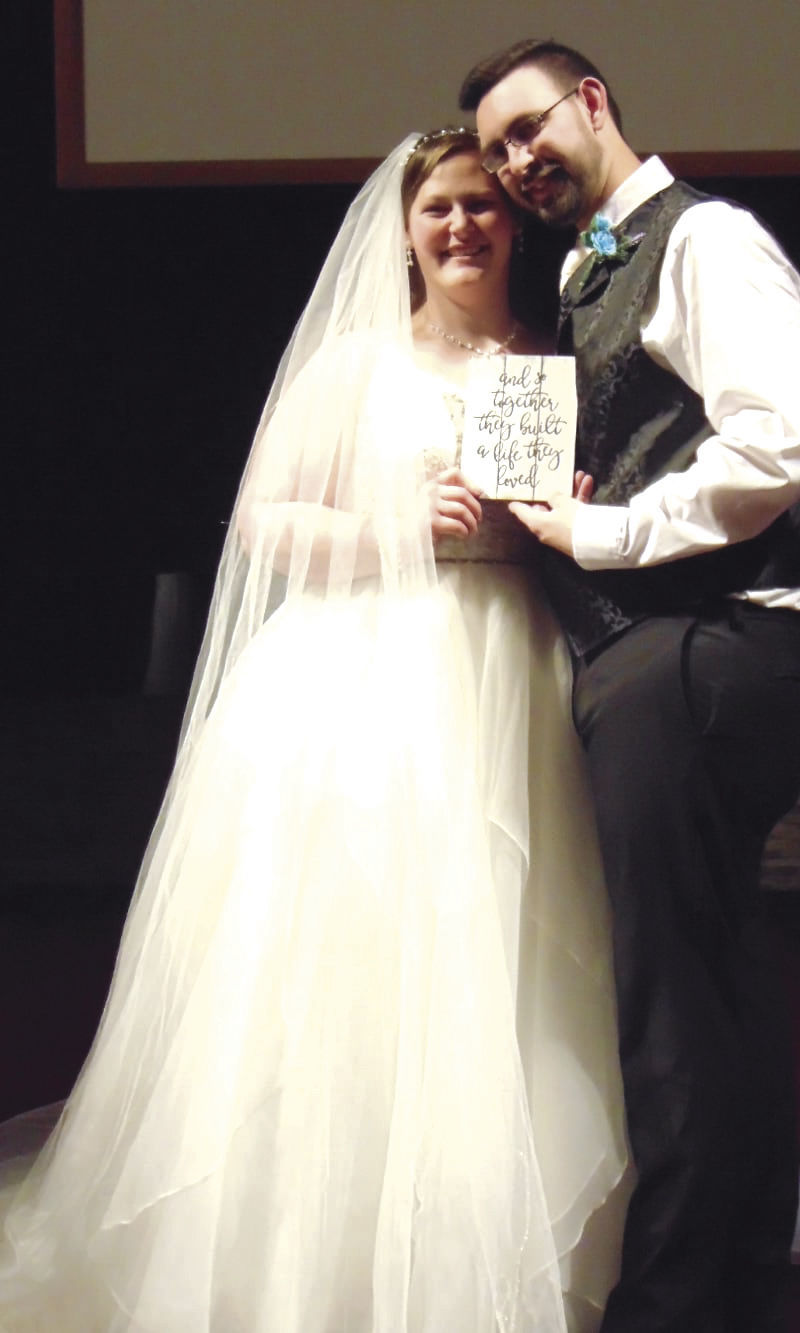 Heather Riley and Jared Osborn at the couples wedding on March 18 at First Baptist Church in Watertown. The pair moved their wedding up 10 days because of concerns that the COVID-19 pandemic could force them to postpone it.

Heather Riley and Jared Osborn at their wedding on March 18 at First Baptist Church in Watertown. The pair live streamed the downsized gathering so family and friends could still take part.

Heather Riley and Jared Osborn at the couples wedding on March 18 at First Baptist Church in Watertown. The pair moved their wedding up 10 days because of concerns that the COVID-19 pandemic could force them to postpone it.

Heather Riley and Jared Osborn had planned to be married in front of 200 people at Watertown’s First Baptist Church on March 28, the six-month anniversary of when they started talking.

Those plans were altered and expedited by the COVID-19 pandemic.

The couple officially got married on March 18, just two days after securing a marriage license, in a church filled with exactly 10 people.

“It was disappointing not to have all the people we wanted present for our celebration,” Riley said. “The people there were our closest, nearest and dearest friends. My husband has a lot of close friends. Others in my bridal party are out of state (and couldn’t make it).

Gov. Tony Evers’ ban on events of more than 50 people took effect on March 16, creating a sense of realization between the pair that a stay-at-home order would likely follow.

They then obtained a marriage license with Jefferson County on the 16th and when asked if their wedding was still scheduled for the 28th responded by looking at one another and saying, “Can we get it done tomorrow?”

As it turns out, each had work commitments, Heather works as a behavioral technician for children with autism in their homes and Jared is employed at Kwik Trip in Janesville, on March 17 but was available on March 18.

They called Pastor Shane Walker and updated him on their prospective change of plans and asked whether he would be willing to marry them on a Wednesday evening. Walker agreed and for the first time turned to a cellphone on a music stand to officially ask for permission to give the bride away.

“As a pastor, almost everything I do for weddings is serious,” said Walker, who officiates a couple of weddings each year. “In that sense, it was serious, binding a couple together in the trinity. There was a lack of a congregation. It was also the first time when I gave away the bride that I had to look at a cellphone. Heather’s Mom and Dad joined the service via telephone link. That was a little different.”

Riley and Osborn each had their best friends present along with Walker and the church’s associate pastor and his wife, who Riley explained are like adopted parents. The final three people in attendance were family members of Osborn’s. Riley’s mother and siblings live in Michigan while her father, who is dealing with stage-four lung cancer, lives in Texas.

“There was no rehearsal so that was nontraditional, but it worked out at the end of the day,” Riley said. “We were married and able to celebrate with some of those near and dear. We were also smart and safe about the decision to get married.”

Obtaining the marriage license quicker came with a one-time fee, a sum Riley and Osborn were happy to pay since it meant being able to move in together.

“We wanted to be married and didn’t want to be separated or spend time apart if the no-contact order went into place,” Riley said.

As for a honeymoon, they planned to spend March 28-31 vacationing in the Delavan area. Those plans also changed, but a friend put them up in a Madison-area hotel last Saturday.

Despite the limited gathering, Osborn’s mother still made the wedding cake as planned. The pair is also planning a wedding sequel of sorts.

“We recorded our official ceremony for others,” Riley said. “When we edit the video recordings, we’ll then play a prequel during the next ceremony of what happened and the other one will be a sequel.”

The ceremony lasted roughly 20 minutes, a shorter version of what they had intended, but the end result officially wed them, 10 days sooner and with roughly 190 fewer people surrounding them than anticipated.